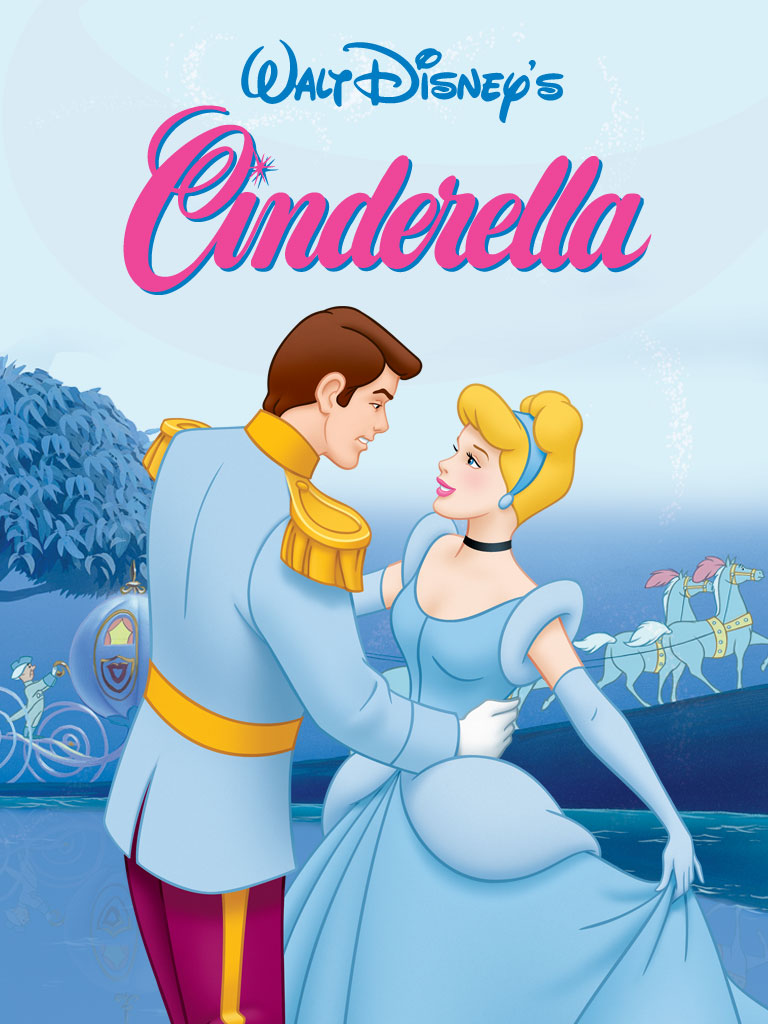 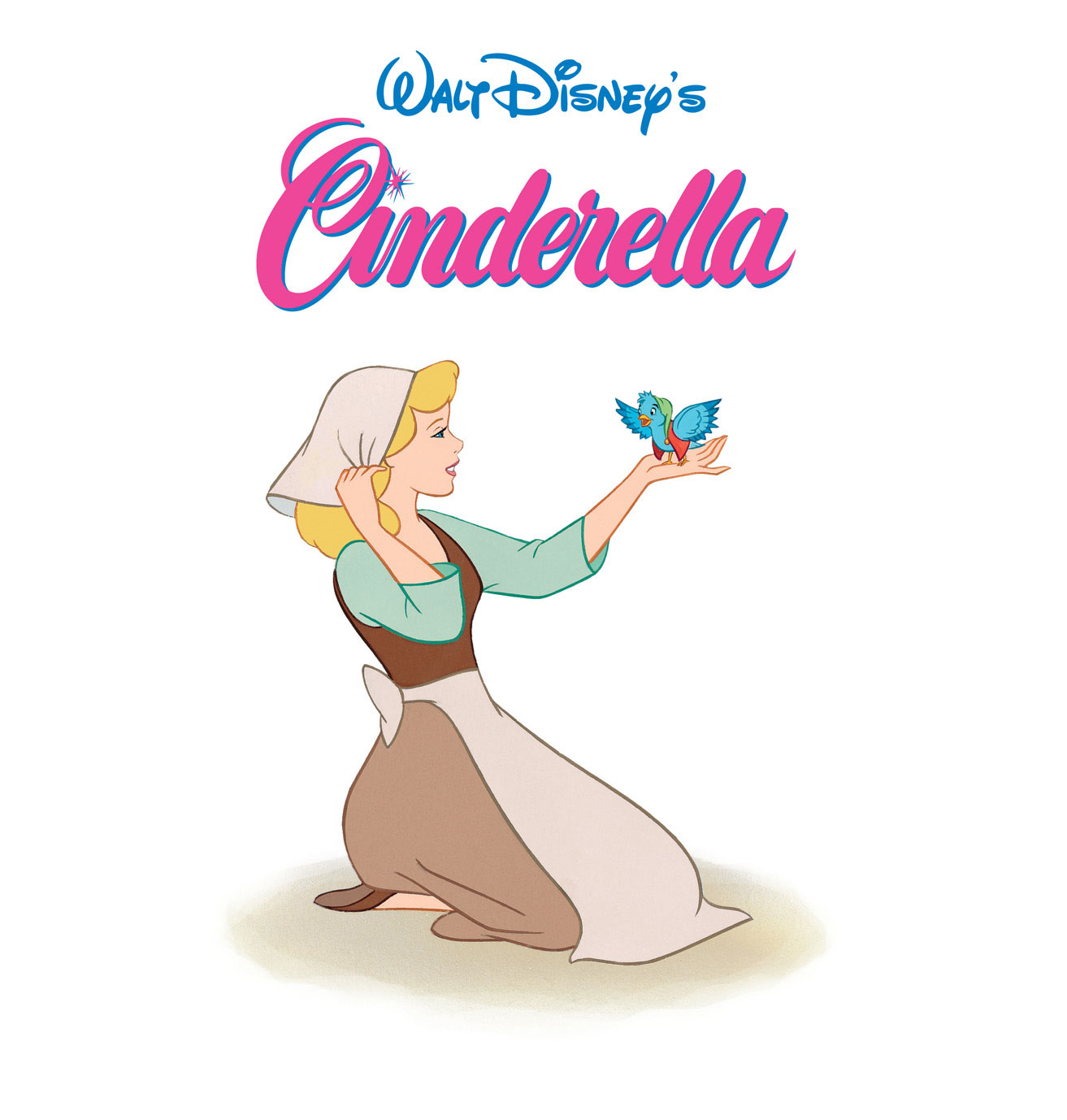 O
nce upon a time, there was a pretty young girl named Cinderella. She lived with her widowed father. He loved her very much, but thought she needed a mother. So he married a woman with two daughters named Anastasia and Drizella. Not long after that, he died.

Cinderella's stepmother, Lady Tremaine, spent most of the family fortune. She forced Cinderella to become a servant and live in a cold, dark attic. Day in and day out, Cinderella did all of the household choresâfrom feeding the chickens to polishing the chandeliers. She waited on her stepsisters and stepmother hand and foot. Yet nothing she did ever pleased them.

No matter how mean her stepmother and stepsisters were, Cinderella was always cheerful. She made friends with the mice and birds and even sewed little outfits for them. Two of Cinderella's best friends were mice named Jaq and Gus. 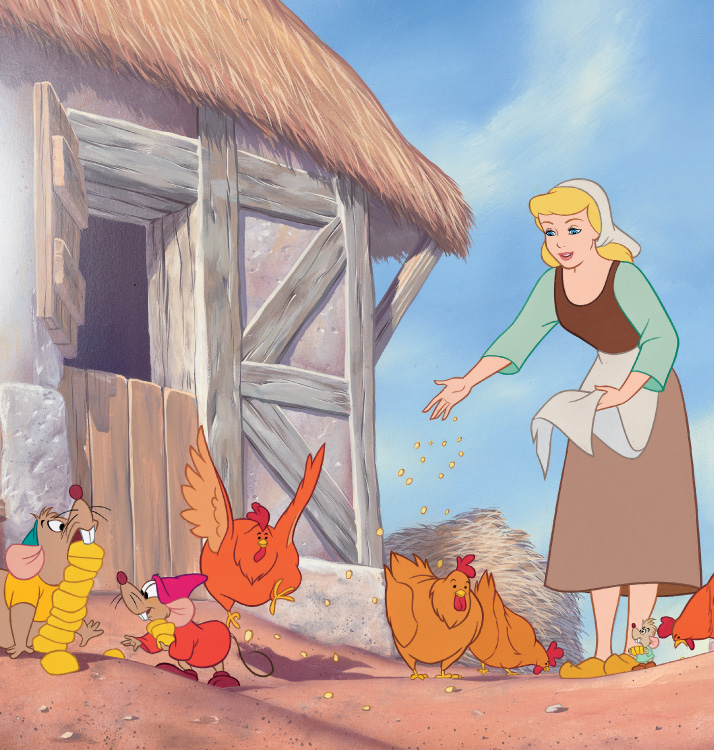 One day, a messenger delivered an invitation to a royal ball. It was to be held that night at the palace. All the unmarried maidens in the kingdom were invitedâthe King wanted to find a wife for his son. 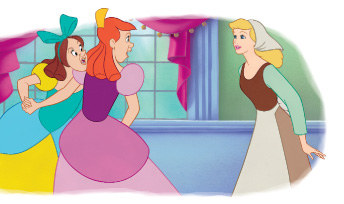 “Why, that means I can go, too!” Cinderella cried. Her stepsisters just laughed at her. They thought it was funny that a servant would think she could go to the ball.

“Well, why not?” asked Cinderella. “It says, âBy royal command, every eligible maiden is to attend.'”

Her stepmother looked at the invitation. “Well, I see no reason why you can't go,” she said, “if you get all your work done and if you can find something suitable to wear.”

Cinderella was delighted. She ran upstairs at once.

In her attic room, Cinderella opened her trunk and found a pink gown that had belonged to her mother. It was a little old-fashioned, but she knew she could make it into a beautiful dress.

All of a sudden, Cinderella's stepmother and stepsisters called for her. The gown would have to wait.

Lady Tremaine gave her stepdaughter a long list of chores to make certain that she wouldn't be able to go to the ball. Even if Cinderella finished, she wouldn't have time to fix the dress. 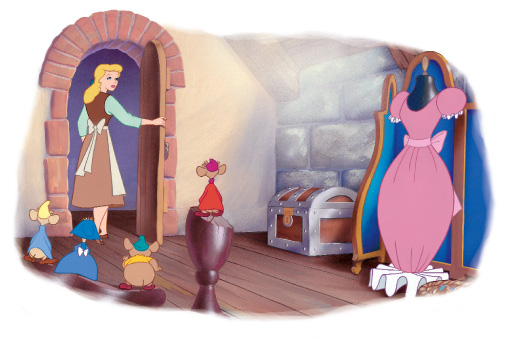 That evening, as Anastasia, Drizella, and Lady Tremaine were just about to leave for the ball, Cinderella went upstairs to her room. She had just finished her chores. Cinderella walked over to the window and looked out sadly at the palace in the distance.

But when she turned around, a surprise was waiting for her. The birds and mice had fixed her mother's old dress using ribbons and beads that Anastasia and Drizella had thrown away. 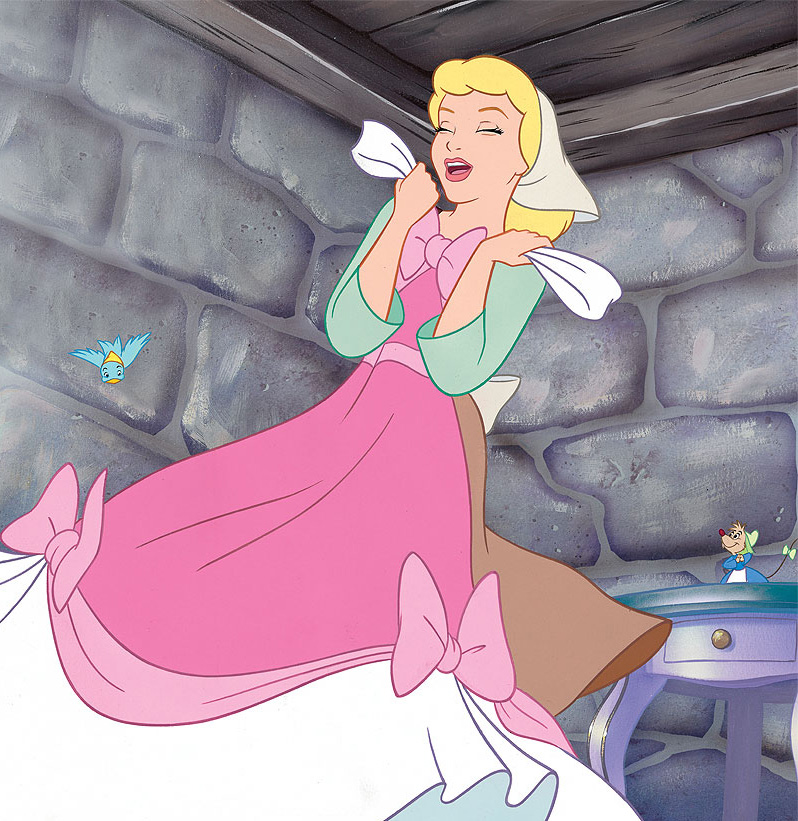 Cinderella was overjoyed. She thanked her friends and ran downstairs. When her stepsisters saw the gown and how beautiful Cinderella looked in it, they were furious.

“That's my sash!” Anastasia yelled as she ripped Cinderella's skirt.

“They're my beads!” Drizella cried as she pulled them from her stepsister's neck.

Cinderella's dress was in tatters. Knowing she couldn't go to the ball, she ran to the garden in tears.

Cinderella was sobbing on a garden bench when a kindly woman appeared. She comforted Cinderella and explained that she was her fairy godmother. 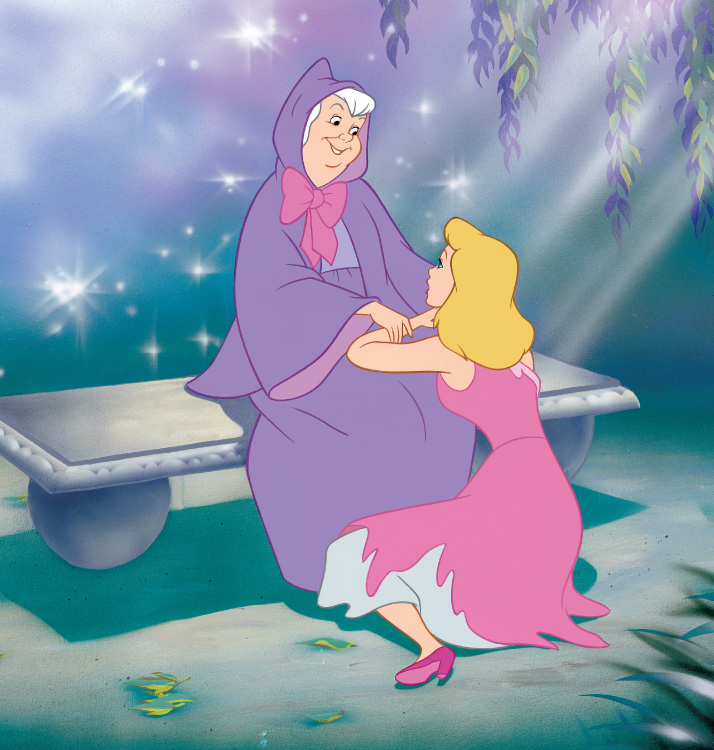 Then she waved her wand and said, “Bibbidi-Bobbidi-Boo.” Suddenly, four mice were transformed into four white horses, and a big, round pumpkin became a glittering coach.

The Fairy Godmother waved her wand again and turned Cinderella's torn dress into a beautiful blue gown. Now she could go to the ball!

“Why, it's like a dream . . . a wonderful dream come true!” Cinderella exclaimed.

“You must understand, my dear,” the Fairy Godmother said, “on the stroke of twelve, the spell will be broken. And everything will be as it was before.”

And with that, the coach whisked Cinderella to the palace.

At the ball, the Prince met a lot of lovely maidens, but he didn't seem terribly interested in any of them. The King wondered if his son would meet anyone he wanted to marry.

Then Cinderella walked in. The Prince was enchanted by her beauty. He walked over to her, and they began to waltz. It was as if Cinderella was the only maiden in the room. The two danced all night. They even waltzed out to the moonlit balcony. Cinderella felt as if she were dreaming. I must be in love, she thought. 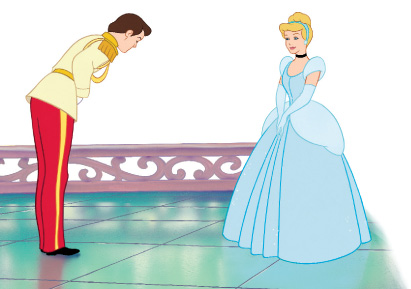 As the other guests watched the happy couple dance, they wondered who this beautiful young girl could be. No one had ever seen her before, but it was obvious she had stolen the Prince's heart. 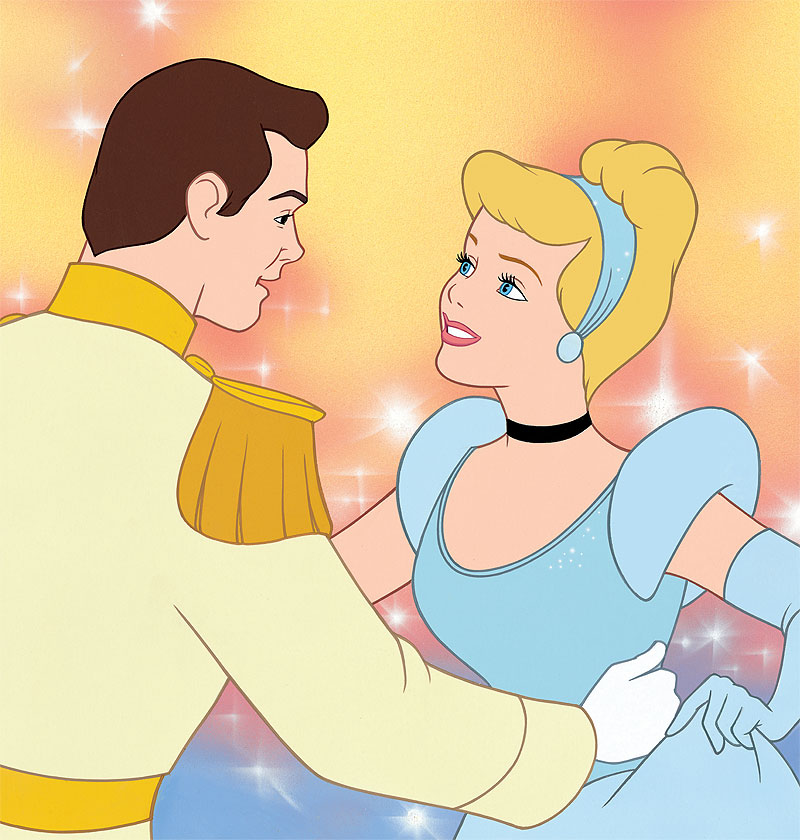 As the clock struck midnight, Cinderella remembered what the Fairy Godmother had said. She quickly ran from the palace before the spell was broken. She was in such a hurry that one of her glass slippers came off as she rushed down the steps. The Prince ran after her, but it was too late. Cinderella was gone, and he hadn't even asked her name. 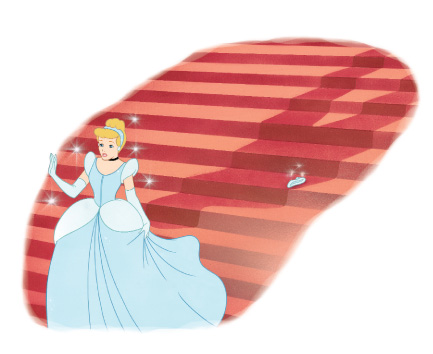 And Cinderella didn't know that the handsome man she had been dancing with was actually the Prince!

The next day, Cinderella was busy doing her chores when she overheard Lady Tremaine talking to her daughters. It seemed the Grand Duke had been looking all night for the girl who had lost her slipper at the ball. The Prince was madly in love with her.

“The Prince!” Cinderella exclaimed. She dropped the tray she was carrying. The man she'd been dancing with all night was the Prince? And he was madly in love with her? Could it be true?

“Not even the Prince knows who that girl is,” Lady Tremaine said. “The glass slipper is their only clue. The Duke has been ordered to try it on every girl in the kingdom. And if one can be found whom the slipper fits, then by the King's command, that girl shall be the Prince's bride.”

Cinderella was in shock. “His bride!” she whispered.

Her stepsisters began to fight over who would marry the Prince. 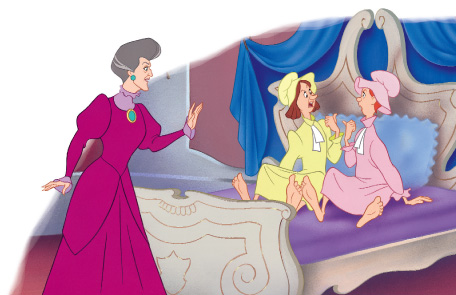 Covert Craving by Jennifer James
Desert God by Smith, Wilbur
Napoleon in Egypt by Paul Strathern
Christianity: The First Three Thousand Years by Diarmaid MacCulloch
The Common Cold (Book 1): A Zombie Chronicle by Roberts, David K.
For Life by Lorie O'Clare
The Healer's Touch by Lori Copeland
This Side of the Sun (The Sun Trilogy) by M. Lauryl Lewis
The Invincibles by McNichols, Michael
Sinister Paradise by Carolyn Keene
Our partner