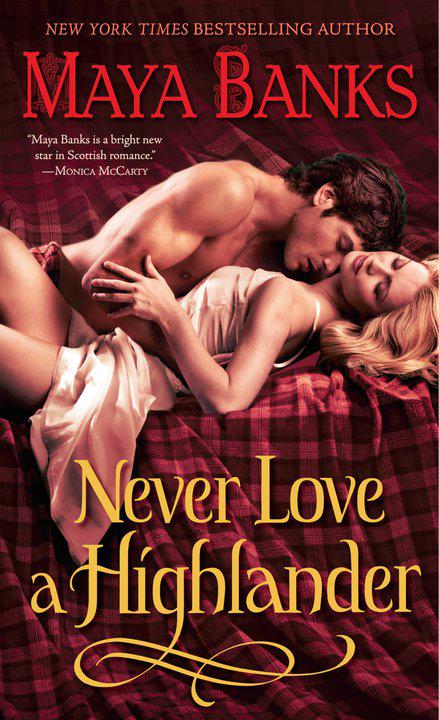 H
esitantly, she pressed her lips to his. Just barely a touch, but it was like a streak of lightning. Hot. His toes even tingled as if they’d been dipped in fire.

It took every bit of his restraint not to roll her onto the bed and kiss her senseless. His newfound patience and desire to not frighten the daylights out of her was one of his more stupid decisions.

She drew away immediately, her eyes wide, a touch of pink suffusing her soft cheeks. Then she slid one hand up his chest and over his shoulder, staring warily at him the whole while as if she expected him to bite her for daring to touch him. Jesu, but he was nigh to the point of
begging
her to touch him.

Her fingers wandered to his neck and then she put her mouth carefully to his again. This time she remained there as she tentatively explored his mouth. With her tongue. Sweet mother of God, this was killing him.

She stirred restlessly against him as she pressed closer, her mouth hotly fused to his.

A surge of lust rolled through his body, but he held back, not wanting to destroy the sweetness of her offering. She was an innocent for all her warrior ways and attempts at acting like a man. She deserved all the gentleness and wooing he could muster, though God only knew he’d deserve sainthood before this was over with.

“ ’Tis not unpleasant, this kissing,” she whispered.

Never Love a Highlander
is a work of fiction. Names, characters, places, and incidents are the products of the author’s imagination or are used fictitiously. Any resemblance to actual events, locales, or persons, living or dead, is entirely coincidental.

Excerpt from
In Bed with a Highlander

Excerpt from
Seduction of a Highland Lass

The weather for her first wedding had been a splendor of nature. An unseasonably warm day in January. Quite balmy with nary a breeze to ruffle her carefully arranged hair. It was as if the world stood still to witness the joining of two souls.

A snort rippled from Rionna McDonald’s throat, eliciting a raised eyebrow from her soon-to-be husband.

The weather for her second wedding? Gloomy and dank with a winter storm pushing in from the west. Already a brisk chill had set in and the wind blew in fierce, relentless sheets. As if the world knew just how uncertain she was about the man who stood beside her, ready to recite the vows that would bind him to her forever.

A shiver skirted up her spine despite the fact that they stood in front of the huge fire in the great hall.

Caelen frowned and stepped closer to Rionna as if to shield her from the draft blowing through the furs at the window. She took a hasty step back before thinking better of it. The man made her nervous, and not many people intimidated her.

He frowned harder, then turned his attention back to the priest.

Rionna cast a quick glance around, hoping no one had witnessed that particular exchange. It wouldn’t do for people to think she was afraid of her new husband. Even if she was.

Ewan McCabe, the oldest McCabe brother and the first man she was supposed to have married, stood by his brother’s side, his arms crossed over his broad chest. He looked anxious to be done with the whole thing.

Alaric McCabe, the man she’d very nearly wed after Ewan got himself married to Mairin Stuart, also looked impatient and kept glancing toward the stairs as if he might run out at any moment. Rionna couldn’t blame him, though. His new wife, Keeley, was above stairs recovering from a wound that had nearly ended her life.

Third time was a charm, right?

King David wasn’t standing for the occasion. He sat regally by the fire, looking on with approval as the priest droned on. Around him, also sitting, were the many lairds from neighboring lands. All waiting for the alliance between the McDonalds and the McCabes. An alliance that would be sealed upon her marriage to Caelen McCabe, the youngest–and last–McCabe brother.

It was important to denote last because if anything went amiss with this wedding, there were no more McCabes for her to marry, and at this point, her pride couldn’t withstand another rejection.

Her gaze skittered from the king and assembled lairds to her dour-faced father who sat away from the assembled warriors, an unmanly, sullen pout twisting his features.

For a moment their stares locked and then his lip turned up into a snarl. She hadn’t supported him in his bid to keep his position of laird. It was probably disloyal of her. She wasn’t sure that Caelen McCabe would be a better laird, but surely he was a better man.

She became aware that all eyes were on her. She glanced nervously toward the priest and realized that she’d missed her cue to recite her vows. Even more embarrassing, she had no idea what the man had said.

“This is where you promise to obey me, cleave only unto me, and remain faithful all your days,” Caelen drawled.

His words stiffened her spine and she couldn’t call back the glare as she speared him with her gaze.

“And what exactly are you promising me?”

His pale green eyes stroked coolly over her, assessing and then lifting as if he found nothing of import. She didn’t like that look. He’d all but dismissed her.

“You’ll gain my protection and the respect due a lady of your station.”

She whispered the words, and she’d have given anything not to have let them slip. It was no wonder she’d been left wanting, though. Ewan McCabe clearly adored his wife, Mairin, and Alaric had just defied king and country to be with the woman he loved—effectively casting Rionna aside in the process.

Not that she was angry. She dearly loved Keeley, and Keeley deserved happiness. That a man as strong and handsome as Alaric had publicly proclaimed his love for Keeley gladdened Rionna’s heart.

But it also brought home how sterile her own marriage would be.

Caelen made a sound of exasperation. “Exactly what is it that you want, lass?”

She raised her chin and stared back at him every bit as cool. “Nothing. ’Tis enough. I’ll have your respect and your regard. I won’t be needing your protection, though.”

His eyebrow rose. “Is that so?”

“Aye. I can see to my own protection.”

Caelen chuckled and more laughter rose from the assembled men. “Say your vows, lass. We don’t have all day. The men are hungry. They’ve been waiting a feast for nearly a fortnight now.”

Agreement rumbled through the room and her cheeks burned. This was her wedding day and she wouldn’t be rushed. Who cared about the food and the men’s stomachs?

As if sensing that she was working herself into a righteous fury, Caelen reached over, snagged her hand, and pulled her up next to his side until his thigh burned into hers through the material of her dress.

“Father,” Caelen said respectfully, “if you’ll tell the lass what she needs to say again.”

Rionna fumed the entire way through the recitation. Tears pricked her eyelids but she couldn’t even say why. It wasn’t as if she and Alaric had been a love match any more than she and Caelen were. The entire idea of wedding one of the McCabe brothers had been hatched by her father and embraced by the McCabes and the king himself.

She was but a pawn to be used and discarded.

She sighed and then shook her head. It was ridiculous to be this maudlin. There were worse things. She should be happy. She’d rediscovered the sister of her heart in Keeley, who was now happily married even if she faced a long recovery in the days ahead. And Rionna’s father would no longer be laird of their clan.

She chanced another look only to see her father throw back yet another goblet of ale. She supposed she couldn’t entirely blame him for being so deep into his cups. His entire way of life was gone in a moment’s time. But she couldn’t muster any regret.

Her clan could be great
—would
be great—under the right leadership. It had never been her father. He’d weakened the McDonald name until they’d been reduced to begging for the aid and alliance of a stronger clan.

Her free hand curled into a tight fist at her side. It had been her dream to restore their glory. To shape the soldiers into a formidable fighting force. Now it would be Caelen’s task and she would be relegated to a position of observation rather than the participation she craved.

She gasped in surprise when Caelen suddenly leaned in and brushed his lips across hers. He was gone almost before she registered what he’d done and she stood there staring wide-eyed as she raised a trembling hand to her mouth.

The ceremony was done. Even now the serving women were flooding into the hall, bearing a veritable bounty of food, much of which came from her own stores after her father’s foolish wager several months ago.

Caelen watched her a moment and then gestured for her to walk ahead of him toward the high table. Rionna was gratified to see Mairin join her husband. In a sea of gruff, indistinguishable faces, Mairin McCabe was a ray of sunshine. Tired sunshine, but warm nonetheless.

Mairin hurried forward with a bright smile. “Rionna, you look so beautiful. There isn’t a woman here who can hold a candle to you today.”

Rionna’s cheeks warmed under Mairin’s praise. ’Twas the truth Rionna was a little ashamed to be wearing the same dress she’d worn when she nearly married Alaric. She felt wrinkled, rumpled, and worn through. But the sincerity in Mairin’s smile bolstered Rionna’s flagging spirits.

Mairin gathered Rionna’s hands in hers as if to offer further encouragement.

“Oh, your hands are like ice!” Mairin exclaimed. “I did so want to be present for your joining. I hope you’ll accept my regrets.”

“Of course,” Rionna said with a genuine smile. “How is Keeley fairing this day?”

Some of the worry lifted from Mairin’s gaze. “Come, sit so we may be served. And then I’ll tell you of Keeley.”

It irked Rionna that she first looked to her new husband only to catch his nod of permission. She gritted her teeth and moved to the table to sit beside Mairin. Already she was acting like a docile nitwit and she hadn’t been married five minutes.

Buried (Detective Ellie MacIntosh) by Watterson, Kate
SPY IN THE SADDLE by DANA MARTON,
Like a Wisp of Steam by Thomas S. Roche
My Shit Life So Far by Frankie Boyle
The 3 Mistakes Of My Life by Chetan Bhagat
The Balkanization of America by Ira Tabankin
Ex-Factor (Diamond Girls) by Dane, Elisa
A Pound of Flesh (A Pound of Flesh #1) by Sophie Jackson
The New Girl by Cathy Cole
Unlikely Friendships : 47 Remarkable Stories From the Animal Kingdom by Holland, Jennifer S.
Our partner