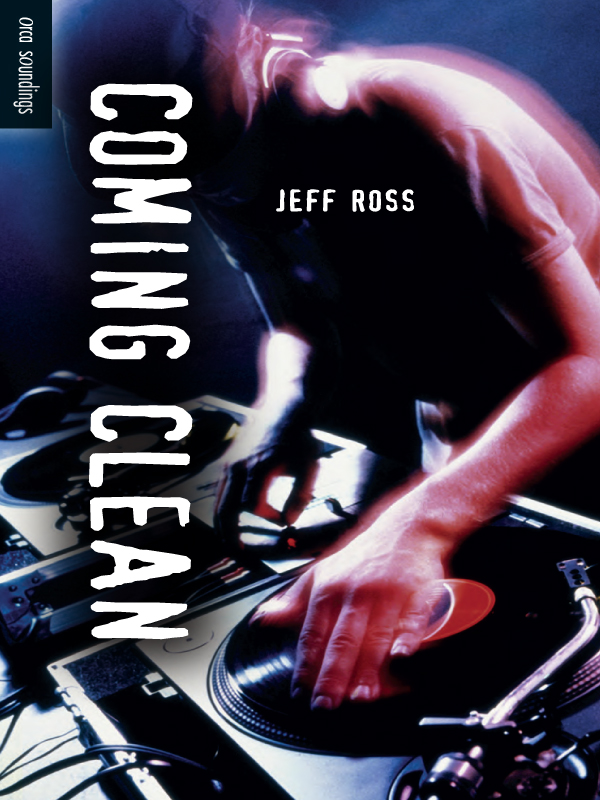 Summary:
Rob wants to be a DJ, but when a girl overdoses during his first gig and his brother is implicated, Rob realizes he could lose everything.

For the real Rob and Matt.
Remember, these characters are,
for better or worse,
fictional.

The problem with my brother is that he is far too often full of it. Which is why I was skeptical when he said he'd landed me a DJ gig at the local all-ages club.

“Seriously, Adam, don't mess with me right now.” I was in my room trying to beat-match an old soul record with a white label drum-and-bass
LP
. It was not going well.

“I'm serious, Rob. I got you this Friday night!”

“Do you mean the DJ Sly who just recently took a nasty tumble and busted his wrist? That DJ Sly?”

“That's because it happened yesterday, and you, as far as I can tell, have been locked in here for the past week.” He looked at the floor, where there were piles of dirty plates and glasses. Mom had been working double shifts, leaving the two of us to our own devices.

Adam is taller than me by about three inches. He's also thicker. I've never been able to break 120, pounds while Adam is a steady 160. He is far too fond of hair gel. His black curls are totally glued to his head. I have longer hair and let it do what it wants. And yet there's always talk about how we look so much alike. Adam has small eyes, which some people might refer to as beady. And his nose is a little too big for the rest of his face. It's these kinds of characteristics that people seem to become depressed about. Like, there's nothing you can do about the size of your eyes or nose, but people are going to make you feel bad about it anyway. Adam also had some pretty severe acne for a while, and his constant action against the angry red balls has left his skin pockmarked and rutted.

In the end, though, neither of us are hideous. But Adam has cared too much for too long about how he looks, and now he often walks hunched over with a hoodie pulled up around his face. Though I have noticed that in the past few months, he's begun to stand a little straighter.

“Anyway, Sly is down for the count and he needs a replacement.”

“And how did you get me Sly's night?” I dropped my headphones around my neck. I then cleared a bunch of records off my bed to make room to sit down.

“I've been working there. You know that.” Adam leaned against the door frame and examined a fingernail.

“So you've been saying. What, exactly, is your job?”

“This and that. What does it matter? I got you the night, Rob. You can do this, right? I haven't just made myself look like an ass on your account, have I?”

I looked at my crates of
LP
s. A lot of DJs had moved onto digital MP3 turntables. But MP3s sound awful, in my opinion. When you put a poorly encoded song through a giant system like they have at The Disco, it sounds like you're listening to music underwater. Everything is floppy and round-sounding. Records are crisp. The beats, hard.

Besides, I can't afford a laptop to run it all.

“For sure,” I said, sounding as confident as possible.

“It's a big night, man,” Adam said. He hadn't moved from the doorway. I knew exactly why. He wanted to be thanked for his awesomeness.

“No problem.” He swiveled off the door frame and put his fist out in front of him. I gave it a quick pump.

“Three hours. You go on at nine.

DJ Lookie takes over at midnight.”

“Awesome,” I said, getting excited about it. “Thanks, man. Seriously.”

The next thing I did was call Matt.

“Really? What's he going to do, suddenly tell me it was a joke when I show up with my gear?” I opened my curtains and was surprised to find it sunny out. I guess I did spend too much time in this small, dark room.

“Like that would be a surprise?” Adam had tied Matt to a tree with a skipping rope once, when we were all kids. Matt had been unable to ever forgive him. On a fairly regular basis, I heard about what an ass my brother was. Though after I punched Matt in the gut once, he tended to keep it to himself unless we were on the phone.

“Why do you have to be such a douche?”

“I'll believe it when you're in the DJ booth. Not a second before,” Matt said.

“It's going to happen, Matt. And by the way, you're driving me.”

“I don't go to The Disco. That place is way too lame.”

“And what great plans do you have for Friday night?” I asked.

“Nothing yet, but something will come around.”

“Nothing ever comes around, Matt. You're driving me. I'll get you backstage.”

“Shut up. Maybe I'll let you up in the booth. You can flick a light on and off all night.”

“Can it be a green light?” Matt said.

“Think you can handle two lights? I might let you at a red one as well.”

“Jesus, man, hold on to it. In
your
head, a thought is as rare as a diamond.” Matt ignored my comment. He's useless at comebacks.

“You know who has recently been spotted at The Disco?”

“How do you know that?” I said way too quickly.

“I hear things. Apparently, she dresses far less reserved than at school.”

“Mary Jane McNally is God's gift to Resurrection Falls, Matt. Whatever she decides to clothe herself in has been preordained from on high. And those lips. Those beautiful, thick lips. They look as though they've been inflated.”

“You are my ride. This is going to happen.” I hung up before he could say another word.

“That's my name,” I said. “Can you see it?” Matt's dilapidated Jetta was one of only four cars in The Disco's parking lot.

“It's covered in crud,” Matt said. Which it was. Whoever had put the letters in the billboard had dropped one and neglected to clean it off. “It looks like it says Rob olo.”

“It says Rob Solo,” I said. Before I had clued into the fact that once you have a DJ name you have to keep it, I'd called myself Rob Solo after Han Solo in
Star Wars
. I guess it was a cool enough name. But even if it wasn't, I was stuck with it.

“You have selected a beautiful evening to make your debut,” Matt said. The snow had been coming down for hours. Though it did make this otherwise dull gray city look halfway nice.

“Now help me get this junk inside.”

“What's all this shit?” Ernie, the owner of The Disco, asked.

“My records,” I said. “And turntables.” Matt was trying to keep his portion of the load upright, but his arms were like twigs.

“I have turntables,” Ernie said. He seemed really annoyed with me. “Have you never played a club before? Everyone else shows up with a computer or a little hard drive.”

“I don't use mp3s,” I said. I noticed Adam coming across the dance floor toward us.

I looked at my feet. “Sound quality,” I said.

“What are you talking about? You think my system is shit?” Ernie said.

“He brought his own gear,” Ernie said to Adam. “You told me he was professional.”

“So why doesn't he know that clubs own turntables?”

“Okay, I'm putting this stuff down,” Matt said, looking around for somewhere to drop the turntables. Adam grabbed them, one in each hand, and placed them on a table near the door. Ernie crossed his arms and looked at the turntables like they were flattened-out turds. He was an older guy, likely in his fifties. Kind of round in the middle and balding. You had to wonder what he was doing running an all-ages club.

“So give them a try. If they aren't right for you, then I'll help set these up. Cool?” Adam looked at Ernie.

“Just be ready by nine.” Ernie walked away, disappearing into the darkness of the club.

The Technic decks were serious old-school. The felt was worn down, and the needle could have been sharper, but they had a nice weight to them, and the arm still bounced when I dropped it on an
LP
. The sound came out soft and hollow. I started messing with the mixing board, twisting the bass up, leveling out the mid, tightening the treble. I always went for a specific sound, and it took a lot of tinkering before I was able to nail it.

The Silver Blade by Sally Gardner
Werewolf in Seattle: A Wild About You Novel by Thompson, Vicki
Then He Kissed Me: A Cottonbloom Novel by Laura Trentham
Death of a Pusher by Deming, Richard
STAGESTRUCK - The Complete Series by Ward, Alice
The Girl In The Clockwork Collar by Cross, Kady
Fit to Die by J. B. Stanley
The Ascendancy Veil by Chris Wooding
Windows Server 2008 R2 Unleashed by Morimoto, Noel
Modern Romance by Aziz Ansari, Eric Klinenberg
Our partner