Read Continent for the Taking: The Tragedy and Hope of Africa Online

Continent for the Taking: The Tragedy and Hope of Africa 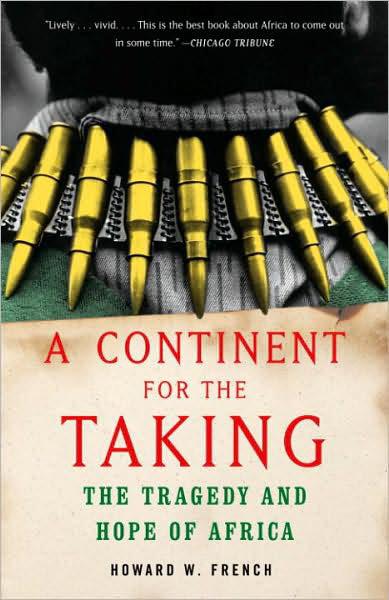 CHAPTER EIGHT - Castles in the Sand

To my parents, who taught me to ask,
and to Avouka, William and Henry, who understood

There
are
paths. If you can’t see them—and why should you see them?—you’ve only got your own eyes to blame. A white man can’t see everything: and he has no need to see everything either, because this land is not a white man’s land.

—CAMARA LAYE, The Radiance of the King

A Continent for the Taking

“Exhilarating for its frankness. . . . A triumph of passionate reporting.”

—
The New York Review of Books

“A passionate, heartbreaking, and ultimately heartbroken book. . . . [French] has a deeper and more profound connection to the continent than most journalists.”

“A brilliant and nuanced meditation on the complexities of contemporary Africa. Essential reading for those of us who love Africa and for all those who wish to gain a fuller understanding of a continent that is sprawling, mysterious, and endlessly fascinating. Howard French’s voice is both fresh and enlightening.”

“Persuasive. . . . The tone is grim, but French also finds an unquenchable African spirit.”

“Even when you’ve been there or know the basic facts, Howard French takes you to Africa in a way you’ve never been taken before. His superb writing, his keen insight and passion-driven analysis combine to make
A Continent for the Taking
a great read for those who find the continent as fascinating as he does, as well as for those who need to know why we do.”

—Charlayne Hunter-Gault, author of
In My Place

“French’s great advantage in telling his tale is his depth of perspective. . . . Rare is the book on Africa that gets passed around among policymakers in Washington—we can only hope this becomes one of them.”

“Many Western narratives tend to exonerate the West for Africa’s seemingly endless woes, placing blame squarely on the continent. Some African accounts tend to blame the West entirely. Howard French strikes the right balance, showing that Africa’s ills are rooted in internal and external factors which are clearly linked.”

“A harrowing picture of a continental catastrophe.”

Africa eludes us; it is so clearly outlined on the map, and yet so difficult to define. It is both the great, primordial rain forests at the heart of the continent and the immense deserts of the north and south.

From afar, Westerners have long fancied it to be divided into “black” and “white,” in the image of their own societies, and yet observant visitors are more likely to be struck by Africa’s diversity, and by the absence of any sharp dividing lines.

The continent is simply too large and too complex to be grasped easily, and only rarely, in fact, have we ever tried. Instead, we categorize and oversimplify, willy-nilly, ignoring that for the continent’s inhabitants the very notion of Africanness is an utterly recent abstraction, born of Western subjugation, of racism and exploitation.

Throughout my life, I have roamed and explored the cardinal points of the Africa we see on the map, and a great many places in between. But “my” Africa, the Africa I first discovered in 1976 as a college student on summer vacation visiting my family in Ivory Coast, will forever be the musty, tumultuous world of the continent’s west and central regions. As I climbed down the stairway from a jet onto Liberia’s steamy, pungent soil for a brief layover on the long flight from New York to Abidjan, where my family then lived, it would be a trite understatement to say that I could not have imagined how my personal discovery of this Africa would change my life.

I would come to master languages and patois from the region. I would marry one of its daughters and the first of my two sons would be born there. The thrill of travel and discovery in this part of Africa—a civil war in Chad, a coup in Guinea, a stolen election in Liberia— would turn me away from an early, passing interest in becoming a lawyer and propel me instead into a career in journalism.

My growing intimacy with the continent, where I discovered that questions of identity were usually far more complex than the stark black-white divide that I had grown up facing as an African-American in Washington, D.C., in the 1960s, would subtly but permanently change my notions of race.

Most important, as a privileged witness to a quarter century–sized slice of history, my understanding of Africa would gradually transform the way I saw the world. It awakened me as nothing else before to the selfishness and shortsightedness of the rich and the dignity of the poor in their suffering, and to the uses and abuses of power.

As important as this transformation has been to me, this book aims to be more than a memoir of Africa and of the impact it has had on my own life. In a much broader sense, it is an extended meditation on the consequences of another encounter, this one centuries old and far more fateful, between Africa and the West.

The personal reportage contained in these pages ranges from my earliest travels on the continent to the end of the century. Cumulatively, I spent nearly a decade living in Ivory Coast, spread out over two decades—the early 1980s and the late 1990s—and from this country, once a prosperous oasis, and now, sadly, a wreck like so much of the rest of the immediate subregion, I roamed far and wide.

The “action” here, as it were, takes place in my home regions of West and Central Africa—places like Nigeria, Africa’s most populous country; Liberia, the closest thing America has ever had to an African colony; Mali, home to some of the continent’s oldest and most distinctive cultures; and Congo, formerly known as Zaire, whose geographical position astride the equator, in the very center of the continent, and turbulent history give it a strong claim to being Africa’s heart, literary clichés aside.

Although this book is full of personal experiences, some of them harrowing, its object is not a mere rehashing of old war stories. In some respects, the dates or details, as narrowly defined, are less important than the broad patterns of treachery and betrayal of Africa by a wealthy and powerful West, often aided and abetted by the continent’s own woeful leaders—patterns that are being repeated even now.

Africa is the stage of mankind’s greatest tragedies, and yet we remain largely inured to them, all but blind to the deprivation and suffering of one ninth of humanity. We awaken to the place mostly in fits of coarse self-interest and outright greed. Once upon a time, these brief awakenings involved a need for rubber or cotton, gold or diamonds, not to mention the millions of slaves, branded and ferried like cattle across the Atlantic, whose contributions to the wealth of Europe and its coveted New World are scarcely acknowledged.

Today, the pickings are as “exotic” as ever, but have been updated to meet the needs of our modern era. Africa interests us for its offshore oil reserves, which are seen as an alternative to supplies from an explosive and difficult-to-control Middle East, or for rare minerals like coltan, which powers our cellular phones and PlayStations. There is one new twist on our selfishness, however—an interest in Africa driven by fear, of AIDS and Ebola and emigrants.

This book is deeply critical of the Clinton administration’s behavior in Africa, which may strike some as unfair, given that President Clinton arguably paid more attention to the continent than any American president before him. But even a rare, high-profile trip by a sitting president cannot obscure America’s role in downplaying the Rwandan genocide so as to escape direct involvement.

Nor does Washington’s brief but active engagement with the continent after the 1994 genocide, which is explored in detail in these pages, make up for extraordinarily misguided policies, driven more by guilt than by genuine care, that resulted in the largely unheralded deaths of at least 3.3 million Congolese—the largest toll in any conflict since World War II.

The Clinton administration, actually, is no more than a representative sample, because the deplorable fact is that the United States has never had a sound Africa policy, starting from the height of the independence era, when the Central Intelligence Agency helped engineer the overthrow of Patrice Lumumba, Congo’s first prime minister, in September 1960, after a mere two months in office. The coup was the first of dozens that would contribute to making Africa the world’s least stable and arguably most corrupt continent.

When we pay attention to Africa’s contemporary leaders, it is often to lampoon them. How conveniently we forget how this tragic pattern was set in place, in Congo as elsewhere, by what John le Carré once called, with appropriate scorn, “the global architects, the world order men, the political charm-sellers and geopolitical alchemists who in the cold war years managed, collectively and individually, to persuade themselves—and us, too, now and then—that with a secret tuck here, and a secret pull there, and an assassination somewhere else, and a destabilized economy or two, or three, they could not only save democracy from its defects but create a secret stability among the chaos.”

President George W. Bush trumpeted his willingness to spend money to fight AIDS on the African continent, but cynically derived the funds for this initiative by robbing the nearly bare cupboard of American economic aid for the poorest region of the world. Meanwhile, the United States was prepared to spend $100 billion or more to overthrow Saddam Hussein, whom Bush denounced as a scourge to mankind.

But in Africa, where genuine scourges exist—plagues of chronic hunger and preventable disease—America remains dumb to the suffering, and indeed often makes things worse. While we push free enterprise to the world, we close our markets to African textiles and subsidize American farmers in ways that make it impossible for the poor of Africa to compete. While preaching democracy, we have nurtured African tyrants, quietly washing our hands of them, as with Mobutu Sese Seko of Zaire and his successor, Laurent Kabila—whose stories are told here in some detail—the moment they become inconvenient.

The United States is by no means alone in this treatment of Africa—indeed, this book is a chronicle of the calamitous continuum in the encounter between Africa and the West. This long-running tragedy began in Congo, where much of my story unfolds, with the destruction by imperial Portugal of well-structured kingdoms in its pursuit of slaves for use as beasts of burden in the Americas.

In its own modest way, this book is intended to help remedy our complaisant forgetfulness and our hypocrisy. My aim is to help remind those who yearn to know and understand the continent better, and indeed Africans themselves, of the continent’s many cultural strengths; my own discovery of them kept me going through otherwise depressing times, injecting relief in a tableau of terrible bleakness. Therein lies a genuine source of hope for Africa’s nearly 800 million people and for the Africans of the future.

Midnight Caller (Moonlight Romance) by Haley Whitehall
Dark Horse by Michelle Diener
The Seduction (The Seduction 1) by Rain, Scarlett
All She Ever Wanted by Barbara Freethy
We Only Need the Heads by John Scalzi
The dream detective: being some account of the methods of Moris Klaw by Sax Rohmer, Internet Archive
Out of Towners by Dan Tunstall
Aaron's Fall by Lee, Vivian Rose
A Fluffy Tale 2: Warm & Fuzzy by Ann Somerville
The Casual Rule by A.C. Netzel
Our partner