The story was that she had disappeared one day to go walking in the bush and had never come back. Her body was never found. The father was away on farm business. And the kids, home alone, had both been bitten by snakes and died.

Mark Thompson seemed to know more about it than most.

‘I’ve slept out here a couple of times,’ he said.

Danny was impressed. ‘What, by yourself ?’

‘Did you see anything?’

Danny screwed up his face. ‘Jeez, what did they look like?’

Mark stopped and turned. He had a very round face and could make his eyes pop like ping-pong balls. He leant over Danny.

Danny wished he hadn’t asked. He hated stories about ghosts and snakes.

Mark made his voice soft and throaty when he said, ‘I wasn’t scared until I heard . . . the clunk.’

Danny was mesmerised. ‘What clunk?’

Mark leant closer, his nose almost touching Danny’s.
His glaring right eye was twitching. ‘The falling head!’ he shouted, as he grabbed Danny by the shoulders suddenly.

Mark rolled his eyes. His voice softened again. His right eyebrow arched. ‘The mum’s head just fell right off when she walked toward me.’ Mark clutched at his own neck. ‘Aw, it was awful!’ He jerked as if pulling his head from his shoulders. ‘Then the head was on the floor talking to me asking me if I’d seen her kids. There was blood and bits of skin and veins hanging down from the neck.’

Danny wished Tippy were with him. He looked to Sam. ‘We’ll be home before dark, won’t we?’

Mark chortled. ‘You’re not scared are you, Danny?’

Danny shook his head hard and straightened himself stiffly. ‘No, no I’m not scared. I didn’t say I was scared.’

He marched off, leading the way just to prove it. All the while he was wishing he would grow and become brave like Mark Thompson.

There were huge moss rocks on the hill overlooking the Miller homestead. Danny was the first to climb onto them.

A breeze brushed his cheeks. When he dabbed more spit on his scabby knee the coolness made it stop stinging.

To Danny the old homestead was like a castle ruin.

Half the roof was missing. Most of the walls were crumbling; there was no glass in the windows. The rainwater tank was seeping water through rusty veins. There was a windmill that creaked when it turned.

Danny jumped from the rocks. He spied something. He froze and stared hard at a crevice at the base of the boulders. Yes! It was just as he’d thought. There was a freshly shed snakeskin lying there just waiting for him.

Danny loved to hold snakeskins up to his eyes. It was like looking through the cellophane that Vicki used in the eyes of her cardboard glasses. The world looked all soft and dreamy. His dad had shown him one day under the pepper trees down by the tractor shed. Standing at the back fence they had looked across the fields to where the lumpy hills rose to the sky.

Danny dropped to his knees and pushed his arm into the darkness. Mark was curious, so he peered in and saw the skin. He nudged Danny with his knee, unbalancing him.

Danny looked up at Mark’s round face, red with the exertion of walking.

Mark and Sam laughed and ran off toward the homestead.

Danny grabbed the snakeskin and ran to catch up without looking back.

At the old house the stone walls were crumbling. 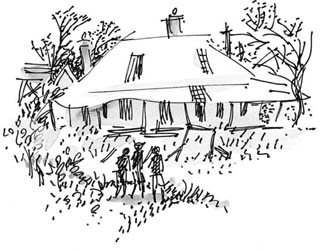 There were rooms with huge holes in the walls, no doorways and no ceiling. The floorboards were gone and prickly bushes grew in their place.

The boys wandered through, kicking at piles of stones and looking at the carvings on the walls. Danny found one he’d done the last time they’d visited.

At the back of the house there was only one sheet of rusty iron left on the bull-nose verandah. When a breath of wind came, it would flap.

The backyard was crowded with round prickle bushes. There was one gum tree and two almond trees. The cockatoos loved the almonds. Beyond that there were three huge red sand dunes. An old car wreck and a collection of boulders tangled in large prickle bushes sat in a small valley at the foot of the dunes.

Of the three windswept dunes the middle one was the biggest. The boys called it the Everest Dune. It was much higher than the creek banks. The red sand of the Everest Dune was smooth except for the crinkle of waves made by the wind that brushed its back. Most times, when the boys came to the homestead, they rolled down the steep dunes like tumbleweeds.

But this time, Mark had another idea. He lifted, from beneath some stones, a sheet of iron that had fallen from the verandah. He liked the way it curved at one end. He ignored the cancer of rusty holes.

‘Look!’ he said, standing the sheet up next to him. ‘This is just like a big tin toboggan.’ 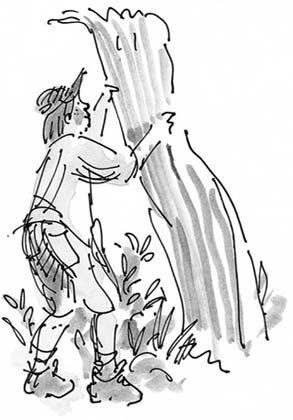 Dropping the sheet of iron to the ground with a clang, he knelt upon it and grasped the upturned end. ‘See,’ he said, ‘we can kneel on this, push each other off and fly down like it was snow. It will be incredible! What do you think?’

Sam looked to the top of the dune then his eyes drifted down to the boulders, the prickle bushes and the old car wreck at the base. He considered the landing. Mark obviously hadn’t.

They trudged up the dune. Mark was excited. ‘This thing will fly, I reckon.’

Sam nodded. ‘Yeah, I reckon it will.’

‘Both of you push me as hard as you can to start me off,’ added Mark.

Danny kept glancing at the rocks. They were huge and very jagged in places. He had to say something; he couldn’t keep quiet any longer.

‘What about the rocks and that old car at the bottom? How are you going to stop?’

Mark chuckled confidently. ‘Oh, I’ve been on toboggans heaps of times. I know how to stop.’

At the top of the dune there was a breeze. The slope was steeper than it looked from the bottom. Danny stood with Sam as Mark dropped his sheet of iron to the
sand. He knelt and took hold of the upturned front. It was rusty and part of it broke off in his hands. He threw it away and grabbed at another spot. The iron was sharp.

‘Okay,’ he said, shuffling into position. ‘When I say go, push as hard as you can and keep pushing until I get up some speed.’

Danny looked down. There was a small mound about a third of the way down. He guessed that if Mark hit that, he was going to get some air. He smiled wickedly at the thought.

Sam tapped Mark on the shoulder. ‘If you can’t stop, just roll off.’

‘Just shut up and get ready to push.’

Danny bent over and wrapped his fingers around the end of the iron. The first thing he felt was the softness of the sand. Then, when he closed his grip, he felt the sharpness of the wavy metal digging into his soft palms.

Mark was still shuffling into position. He looked back at Sam. ‘This is how you do it, see, you’ve got to get yourself balanced. You’re hopeless; you always lose your balance.’

Sam was getting annoyed, Danny could tell.

Mark continued, ‘And you as well, Danny. You only
fell off the slide on your bike because you can’t balance. Must run in your family.’

Mark was rocking back and forth on his knees when he said, ‘Don’t push me until I’m ready.’

Sam looked at Danny and smiled deviously. The smile Danny returned was just as wicked. It was as if they had read each other’s mind.

Sam winked at Danny. Danny nodded in recognition of the signal. Mark was still positioning himself when the brothers cried, ‘
Now!
’

They both ran, pushing hard on the iron. Mark swayed backward and cried out in panic. ‘Heeey! No! Not yeeeeeet!’

Too late, he was off. Mark was bouncing and rocking; he hung on desperately. His hair was pushed from his forehead as he gathered speed.

Danny and Sam laughed as they pushed. It was hard work and their feet sank in the soft sand.

Then, as the sheet of iron suddenly dipped forward and headed down the steepest part of the slope, it left their grasp. Away it sped, faster and faster.

The speed was incredible.

Danny and Sam laughed and stumbled into the softness of the fine red sand, enjoying its warmth.

Danny was astounded at how quickly Mark was
flying down the hill. The sound of the sand shushing beneath the iron was one he would never forget.

Danny cringed as Mark’s tin toboggan bounced and he saw fine sand spitting into Mark’s cheeks. Some must’ve gone into his mouth because he suddenly began spitting, just as Danny had done himself when skidding down the sheep track.

When Mark repositioned himself so that he was leaning forward and grasping hard, Danny found himself copying the actions.

Danny grabbed Sam by the arm. ‘Look at him go!’

Sam laughed as he focused on the flapping of Mark’s hair, the bounce of his body and the imagined look of horror on his face.

Mark teetered a little, making the tail of his sheet of iron snake slightly.

‘Watch this, watch this,’ said Danny, pointing to the small mound that Mark had no hope of avoiding. ‘He’s going to take off !’

The brothers laughed hard together as Mark hit the crest of the mound and became airborne. The nose of the iron tipped skyward and Mark leant backward. The tail looked as if it was going to hit the ground and send Mark into a sickening spin.

Danny held his breath and found himself gritting his teeth waiting for the high-speed tumble.

Incredibly, Mark kept this head and trusted his instinct. Leaning forward, he made the nose dip just enough to level himself.

He made a landing!

It was an awkward landing with a few uncomfortable bounces, but he made it and he continued his ride with the tail of his sheet still snaking.

Sam looked ahead to the boulders. He wondered if Mark realised how close he was getting. Sam ran from the crest of the dune.

‘Look out!’ he yelled, his hands cupped around his mouth. ‘Look out for the rocks! Get off ! Dive!’