Finding the tin was easy. The spider webs hanging from the old wardrobe didn’t worry Danny. He ducked under them, then looked into the shadows under the bench and spotted the tin. It was an old tin from the kitchen and Danny’s dad had twisted wire to make the handle.

Danny snatched the tin and scampered out of the shed. On the way back up the driveway his foot kicked a pothole. He nearly fell and the tin rattled, but he made it back without being seen.

‘Well done,’ said Sam, patting him on the back.

Danny felt good. He puffed up proudly. ‘It was easy,’ he said.

Excited, they walked quickly out the driveway. Two chickens followed, but Tippy chased them flapping back into the yard.

The boys were at the edge of the road and about to cross when they were startled by the squeal of the front screen door being thrown open. They froze, thinking it was their mother, and they turned slowly, their wide dark eyes rolled toward the door. It wasn’t their mother they saw on the verandah; it was their little sister, Vicki.

She danced up to a post, took hold of it and spun herself around. She was wearing the thin white dress their mum had made for her. It was her favourite. She liked the way it fanned out from her knees when she twirled.

Spinning once around the post, she jumped from the verandah and skipped happily toward her brothers. Her long hair flapped across her shoulders.

Vicki squinted up at the sky. ‘I heard the thunder, boys, did you?’ she said. Vicki spied the big tin behind Sam’s back. ‘Hey, what’s that for?’ she asked, craning her neck to see. ‘Have you got something in there? Show me.’

Sam tipped the tin upside down. ‘No, nothing.’

Vicki put her hands on her hips. ‘I know when you’re lying.’ Pointing a sharp finger and frowning, she said, ‘You can’t keep secrets and tease me, remember? Mum said!’

Vicki had him cornered and she knew it. ‘If there’s no secret then I’m going to come and see what you put in the tin.’ She smiled and wriggled her hips to make her dress twirl.

‘You can’t come,’ said Danny sharply. ‘We’re going to the dam to get tadpoles.’

Sam nudged him with his elbow. ‘Danny! What did you tell her that for?’

Vicki looked at Sam smugly. She folded her arms. ‘Then I’ll tell Mum.’

There was silence. Sam flipped his cap off, ruffled his hair, sighed, and then put it back on again. ‘Okay then, we’ll be quick,’ he said as he moved to look Vicki in the eye. He clasped her shoulders just as he had done with Danny under the pepper tree. ‘Now listen, you have to do what I say though,
exactly
what I say.’

Vicki smiled and nodded. ‘I will, I will do what you say,’ she said.

Vicki was happy. It showed in the way she skipped and danced across the road. She chatted and sang all the way.

Tippy was happy as well. His tail didn’t stop wagging and he sniffed every post he passed. They walked past the church and out of the town.

A tall forest of wild yellow weeds lined the dirt track to the dam. The fence they had to climb through was made of barbed wire and was old and rusty with rotten posts. Some had fallen and were half-buried in small dunes of red sand.

Danny held the wire up for Vicki, but she still managed to tear her dress a little. She sat in the sand and looked at the hole. Her finger poked through. ‘You did that, Danny!’ she said crossly.

Danny decided to distract her. ‘Quick! Get up!’ he cried. ‘There are ants down there.’

Vicki jumped to her feet and snatched at Danny’s shirt-tails, brushing her behind madly. ‘I don’t like ants.’ The hole in her dress was forgotten.

Sam led them quickly up the slope that was the
bank of the dam. Danny felt like an explorer as they reached the top and looked out over the water. There wasn’t a ripple. The water was like a giant mirror; he could see the reflection of the darkening sky.

To their left was the small creek that flowed into the dam when the rain came. The last time Danny had stood in its dry bed the creek’s sides only came up to his head. It was narrow and cut a twisted course down a gentle slope to the dam. A few scratchy bushes lined its banks. The thick forest of reeds at the mouth of the creek was where pools formed. Sam suddenly grabbed Danny’s arm and pointed to them. He spied sunlight glinting off water. ‘That’s where the tadpoles will be!’ he cried. ‘Let’s go!’ 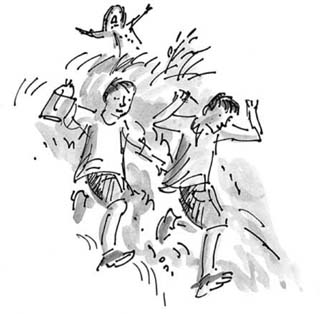 Down the slope they ran. Sam led the way, his arms flailing, trying to keep balance. ‘Whoa! I’m going to fall!’ he laughed.

Danny was right behind him. ‘Look out! I’m coming through.’

Vicki couldn’t keep up. ‘Wait for me! Waaaiiiit!’

Tippy left them and went to the edge of the dam to drink.

They reached the reeds and ran up and down the bank of the dam searching for the best spots. From where Danny was standing it looked like a miniature canyon.

Vicki slipped and trod in mud. Some splattered onto her dress. ‘Yuck!’

Sam knelt at the side of a weedy pool. He put the tin by his side. Beneath his wide-eyed reflection he spied movement. He pushed his giant hand into the watery world and began hunting. ‘There are heaps in here!’ he said.

Danny crouched beside him. The small pool of water was wild with tadpoles. Danny couldn’t believe his eyes. ‘Look at them!’

‘Don’t just look at them, catch them!’ said Sam.

There was splashing, laughing and shrill cries of delight. Sam scooped up water with his hands. He was a good tadpole catcher.

Danny caught a couple, but Vicki only caught blobs
of mud so she gave up. She squatted by the tin and guarded the writhing prisoners. She stuck her hands in and let the tadpoles tickle her palms. Before long the tin was nearly full of water. When Danny looked in and saw the frenzy of trapped tadpoles stirring the water he thought they must have at least a million! But that was just a rough guess.

The hunt was suddenly interrupted by a tremendous
crack
of thunder. Everyone jumped. They all stopped and lifted their heads. The sky had darkened suddenly. Wind pushed into their backs. The reeds swayed and crackled, then a flash of brilliant lightning forked in jagged streaks across the sky.

Crack!
Vicki cringed as the thunder rumbled away in booming echoes. She walked over to stand with Sam. ‘I want to go home,’ she whimpered.

He stared at the water: hovering, waiting, hunting.

Vicki hung on to his shoulder, her eyes rolling to the sky. Beyond the reflection of his little sister’s worried face Sam could see the tadpoles dodging and weaving through reed stalks and green slime. He placed his hands in the water and waited for a tadpole to swim into his trap. He was about to pounce when a huge drop of rain fell into the water and distracted him.
Ploop
.

More fat raindrops fell, splashing cool on Sam’s
back. His reflection crinkled as the pool of water he was peering into was rippled with rings.

Danny had moved to stand halfway up the bank. He watched as the first drops bombed the dam and a million circles appeared. The splash of cool water on his neck and shoulders made him giggle.

He spread his arms like wings and watched the huge droplets explode on his skin. Then he tilted his head back and looked up. Lines of rain came spearing down at him. Heavy droplets, cool and fresh, landed in his eyes. So he closed them and felt the weight of the rain on his eyelids. Cool water splashed on his cheeks. The best feeling was when he stuck his tongue out and tasted the rain.

Then, another rumble of thunder, louder than the first, saw the rain come pounding down, drumming loud and hard. Tippy barked at the sky as little rivers began running around Danny’s feet.

Danny looked at the creek.

Through a curtain of wild rain and beads of water hanging from his furrowed brow, Danny saw Vicki reach for the tin. ‘I’ll save the tadpoles,’ she cried. With two hands wrapped around the wire handle Vicki bent her knees slightly to lift the tin. She wobbled and teetered, then skidded and slipped. She was like a newborn lamb trying to stand.

Too late. Down she tumbled. The tin fell from her hands and rolled bumping and rattling down the bank toward the dam. The water flowed from the tin in a flood and emptied the tadpoles into the dam.

The tadpoles were gone and Sam was furious.

Vicki squinted through the rain and sat in the mud sad and silent.

Sam ground his teeth angrily. ‘You just don’t listen, do you?’ he yelled as he marched to stand over Vicki. ‘I told you to leave it! I said when we came that you had to do what I said!’

Sam turned his back and climbed up the bank. ‘You can get the tin.
I’m
not!’ He marched up and hit Danny on the arm as he passed. ‘Let’s go!’

Danny looked back at Vicki. She was wet and muddy and her hair hung like cooked spaghetti. The tin was lying at the edge of the water.

‘Bring the tin,’ said Danny, turning his back on her. ‘We have to go home.’ He trotted off to catch Sam.

Along the track the boys ran, bombing big puddles with their pounding feet. They laughed. Tippy dodged their explosions.

They ran across the road, down the driveway and into the back shed. The sound of the rain on the tin roof was loud as they shook themselves like dogs. The
doors were open and water streamed over the gutter. Danny felt as though he were behind a waterfall in a cave.

With flat hands Sam suddenly chopped at the waterfall and splashed Danny. ‘Ha, ha, ha. I got you in the face!’ he said.

Danny retaliated, but Sam jumped back. ‘Ha, ha, you missed, Danny! You missed!’ The game was on.

Tippy barked at the frenzy of the water war. The boys laughed hard and played wildly. In some places the water made thin panes like glass. The boys loved shattering them.

The rain was easing when they heard their mother open the back door. ‘Children, come inside and dry yourselves,’ she called. ‘Hurry up.’

Pushing and bumping, dripping and skidding, the boys stumbled into the kitchen. It was warm and smelt of biscuits.

Tippy shook himself and so did the boys. They were giggling.

Their mother turned and smiled. Specks of flour dotted her cheeks. With a funny puff from her bottom lip she tried to blow an annoying strand of hair from her eyes. ‘Haven’t I told you not to stay out in the open when there’s lightning about?’ She paused and looked toward the back door. ‘And where’s Vicki?’ she asked, matter-of-factly.

Drips fell from his nose. His breathing quickened. His eyelashes fluttered wildly and his heart pounded up to his throat.

He looked sharply at Sam.

He could feel his mother staring at him. ‘Was Vicki out there with you?’ she asked.

Silence. Danny’s eyes darted to Sam then back to his mother. Suddenly Danny felt icy cold and began to shake. He felt his jaw drop as his mother looked into his shifting eyes. It was as if she could see behind them into Danny’s mind. Her happy face changed, just like the sky at the dam, to dark and gloomy.