Sam and Mark walked away squabbling.

Danny stayed with Stanley. As soon as the boys were out of earshot he talked softly to him. ‘Remember me, Stanley? I used to feed you.’ The ram seemed to be listening. ‘I gave you milk. You’ve got to remember me.’

Stanley turned away and walked back toward the homestead.

Danny watched him until he heard Vicki call. ‘Hurry up, Danny! You’ve got to push me.’

Vicki was waiting in the playground. She was sitting on a swing that had a bright blue seat. ‘Look, Danny!’
she cried. ‘A new seat! Dad put a new seat on the swing.’ 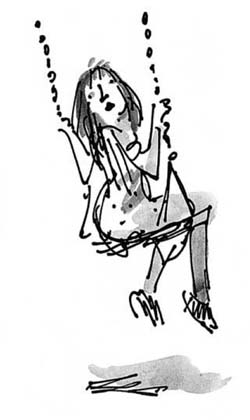 ‘No, he didn’t,’ said Danny. ‘He painted it, that’s all. He’s going to paint the others in the next few days.’

Vicki touched the seat as if it were gold. ‘It looks new.’

Danny’s dad had been working on the playground. After a long day in the paddocks he had worked in the last light of the evening. He had a welder and had been a carpenter before becoming a farmer. The council had
asked him to help fix the old playground. Danny’s dad said he could use the extra money so agreed to help out. Danny liked the sound of extra money. He thought he might ask for a new bike. He wanted a silver one that could do jumps. He wanted to ride cross-country down through the creek without having to worry about chains falling off, or pedals breaking.

Vicki was sitting on the swing dangling her legs. ‘Push me, Danny! Push me. Come on. I want to fly like you and Sam do on the swings.’

Vicki didn’t know how to make a swing fly. She was good at twisting them to make them spin her dizzy though. She told Danny he was the best swing flyer she’d ever seen. He knew she was lying. Sam was the best. He could make a swing fly so high he almost swung in a complete circle. ‘Teach me how to fly like you, Danny,’ she pleaded.

Danny tried to explain to Vicki how to move her legs back and forth with the movement of the swing. She was hopeless. She either kicked her legs too much or at the wrong time. Danny tried for almost half an hour and she still couldn’t do it.

He jumped onto the swing with the splintery seat next to her. ‘Look, watch me.’ He started swinging. Vicki watched intently.

Vicki nodded enthusiastically. ‘Okay, now I get it.’

Danny heard a car and turned to see Mr and Mrs Wallace pull out of their driveway. They stopped at the gate. Aunty Jean rolled her window down. ‘Hi kids,’ she called. ‘How did your dad go with the bank, Danny?’

Danny didn’t know, but he gave an answer that made sense to him. ‘He got more money like always, Aunty Jean.’

Aunty Jean turned to her husband and said something that Danny couldn’t hear. Then she waved. ‘See you then.’ The car pulled slowly away.

Danny turned back to his sister.

Vicki concentrated hard on her swinging, so much so that her tongue stuck out of the side of her mouth. She tried and tried but couldn’t get it. Her swing just wobbled from side to side.

Danny sighed. He couldn’t be bothered. ‘You’ll get it, just practise for a while.’

He set his swing in motion, pushed hard and took off. As he gained height he peered across to the Wallaces’ to see if he could spy Stanley. The paddock looked empty. Danny thought nothing more of it and
turned back to enjoy the feeling of flying. He stuck his arms out like wings and pretended he was gliding.

As soon as he was as high as he could go he closed his eyes. It was a great feeling – it was like a dream.

Danny was enjoying himself until he heard frantic voices calling in the distance. The sounds of obvious panic aroused his curiosity. He opened his eyes. The wind whistling past his ears made the voices seem farther away than they actually were, but he recognised them straightaway.

Then he heard Sam.

‘You shouldn’t have teased him!’

Danny slowed his swing and tracked the voices. They were coming from the other side of the cemetery.

By the time Danny had stopped his swing Vicki was at the playground fence peering up the street to see what all the fuss was about. Danny ran to join her. That’s when everything became clear.

Sam was the first to appear, sprinting around the corner. His arms and legs were pumping furiously. Hot
on his heels was Mark Thompson. He might be able to kick a footy over the Mundowie Hall, but he was not a fast runner.

He looked clumsy and as if he were about to take a tumble with every step. His round cheeks were wobbling violently. His face was red and he was huffing and puffing loudly.

The running style he used was funny to watch. He pulled his shoulders back and thrust his barrel chest out. His round knees came up very high. The way he pushed his chin into his chest made it look as if he didn’t have a neck. His eyes were bulging to an incredible size. And his whole body quivered with the pounding of his large feet. ‘Look out! Look out!’ he bellowed.

Mark looked continually over his shoulder. Danny wasn’t sure why, until he saw what the boys were escaping. Stanley appeared. Danny would never have believed a ram could have such focus. He wanted those boys.

Vicki smiled when she saw Sam and Mark racing. Her smile broadened when she saw Stanley charging after them. She didn’t understand the seriousness of the situation. Having watched her brothers at sports days, she thought that whenever people ran fast the idea was for the crowd watching to jump up and down and cheer. So she did.

When she saw Stanley she pointed, laughed and cried out, bouncing up and down like a ball. ‘Ha, ha, a ram race! A ram race! Yay!’

Danny leant over the playground fence. ‘In here, Sam!’ he cried, waving madly. ‘Run in here! Quick! We can hide in the fort.’

The playground had an old wooden cubby house. Everyone called it the fort. It was hardly a fort but
fort
sounded better than
cubby house
. Mark Thompson took the credit for the name. He was never going to be a party to anything called a
cubby house
.

With no other plan in place Sam took Danny’s advice. Mark was not far behind, but he was slowing. ‘Wait for me! Wait!’

Stanley was tossing his head menacingly.

Danny grabbed Vicki’s arm and stopped her from cheering. ‘Get into the fort! Quick!’

Danny pulled Vicki from the fence. ‘I said run to the fort! Do as I say. I don’t want another day like the one at the dam.’

Vicki put her hands on her hips and frowned defiantly. ‘What do you mean?’

Danny looked her in the eye. ‘Well, if Stanley the giant ram spears you with his horns he’ll rip your guts out!’

Vicki threw a quick glance at the size of the horns. She put a hand on her stomach. She suddenly realised what was happening. ‘I’m scared, Danny,’ she cried, tugging at her brother’s shirt. ‘You come with me!’

Sam arrived and ran straight past Danny and Vicki. ‘Come on!’ he panted. ‘Over to the fort! Hurry up!’

Vicki wouldn’t let go of Danny’s hand. They ran toward the fort and Vicki trailed behind like the tail of a kite in a wild wind.

Behind them they could hear the puffing and blowing of Mark Thompson. ‘Wait up!’

Danny, Vicki and Sam were at the fort peering out the little window when they saw Mark stumble at
the gateway of the playground. Grabbing hold of the gatepost he tripped and, with a violent twist of his tired body, fell to the ground. If there was a gate to shut, he would’ve been safe, but there wasn’t.

Stanley saw the fall. He eyed the body on the ground and closed in.

Sam stuck his head out of the fort window. ‘Thompson! Get up!’

Mark didn’t need to be told. He was trying to get to his feet, but his legs were like jelly and he was out of breath. He lifted a hand and reached out desperately for help that wasn’t there. ‘Come and help me!’

Mark rose to his knees and was on all fours. Stanley was right behind him. Mark’s large round bum, wobbling and shuddering, was a perfect target. Stanley dipped his head and ran hard. The contact he made must have given him great satisfaction.
Thoomp!
He butted the huge target with fantastic force.

Mark was thrown sharply forward. ‘Agghh!’ His head struck a rock.
Crack!
The sound was sickening. Then he lay, flat and still, not moving at all.

The hostages in the fort fell silent. They stared, waiting and hoping for movement. There was none; Mark looked dead.

‘What happened back there, Sam?’ asked Danny. ‘How did Stanley get out?’

‘Mr Wallace must have left a gate open,’ Sam panted. ‘Stanley was near the hall munching grass. He was wandering about quite happily minding his own business until Mark saw him and decided to kick the footy at him. The ball hit the ram in the face and, naturally, Stanley wanted to kill him.’

‘Well, he might have,’ gasped Danny, motioning toward Mark’s body. ‘He hasn’t moved, so he’s either unconscious or dead!’ Danny started to stand. ‘We have to help him.’

Sam grabbed him. ‘We can’t go out there! You saw what that mad animal did to Thommo.’

Vicki shook her head worriedly. ‘No, Danny, you can’t go out there. I don’t like guts coming out.’

‘Who?’ said Danny. ‘Mr and Mrs Wallace aren’t home. I saw them go out in the car.’ He looked around. ‘And I don’t think anyone in the cemetery will hear us.’

‘I don’t know. He went off sniffing for something,’ said Danny.

‘No way!’ protested Danny. ‘He’s too little. Stanley would kill him with one blow.’

At that moment Stanley thrust his horns grumpily at Mark again. He lay still and floppy. Stanley butted him again. Mark was pushed onto his back. The gash on his forehead where he had hit the rock became visible. It glistened.