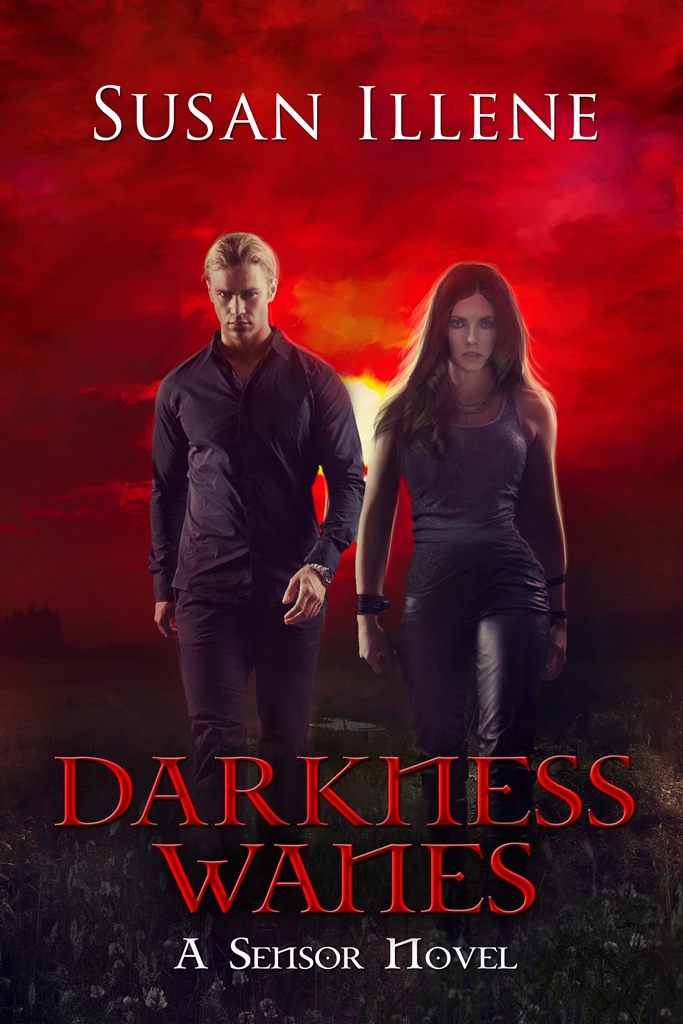 This book, whole or in part, may not be copied, scanned, or reproduced by electronic or mechanical means (including photocopying or the implementation of any type of storage or retrieval system) without the express written permission of the author, except where permitted by law. Please do not participate or encourage the piracy of copyrighted materials. Purchase only authorized editions.

Images obtained for the creation of this novel’s cover were licensed for use from depositphotos.com and Teresa Yeh photography. Design by Claudia McKinney at Phat Puppy Art.

This book is a work of fiction. Names, characters, places, and events portrayed within its pages are products of the author’s imagination or are used fictitiously and are not meant to be construed as real. Any resemblance to actual persons, living, dead, undead, or mostly dead is purely coincidental.

No one inspired me to achieve my dreams more than you—no matter how crazy they sometimes sounded. You are one of the reasons I became a writer and chose to start publishing my books. Thank you for always believing in me, Grandad. I love you and will miss you always.

Other Books by Susan:

Some places should be avoided at all costs. Troll villages, the woods on a full moon, and retailers on Black Friday topped my personal list, but above them all—Purgatory. It was an inhospitable island set outside of time and space where human souls went after death when they weren’t quite good enough for Heaven, but not bad enough for Hell. One might consider it a sort of way station—though it was probably closer to a prison. Unless you had a very good reason, you didn’t come there voluntarily.

The sandy beaches at the island’s edge could fry eggs or blister bare feet. A prisoner couldn’t swim away, assuming they made it through all the guards first. The ocean surrounding the land extended forever, an infinite mass of water with no apparent end. Not that you’d want to be outside in Purgatory. Blinding light shone down from a sun that appeared twice as large as Earth’s, and it generated more heat than any mortal could survive for more than a few minutes. That is, assuming the low oxygen levels didn’t suffocate them first.

Jagged mountains rose in the middle, raw and intimidating. All along them, human souls relived the crimes they’d committed in their past life. These were people who weren’t good enough to enter Heaven yet, but neither were they terrible enough for Hell. Purgatory served as a place for them to learn from their evil deeds before they went on to their final destination.

They had no bodies, only the light of their inner beings, but that didn’t reduce their suffering. On the rare occasion I came close enough to them, I felt their pain and remorse in every fiber of my being. Nothing could be worse than facing one’s past mistakes over and over again with no relief. This place couldn’t be mistaken for an island vacation spot. It was real, and it was only one step above Hell.

It wasn’t that much better for me, either. The only difference being I wasn’t dead yet. Purgatory also served as an immortal penitentiary, though supernatural inmates didn’t stay up top with the human souls. The guardians of the place—sort of an offshoot breed of angels—kept us confined deep inside the mountains in a vast network of tunnels and carved-out prison cells. Of all the inmates here, they hated me the most. I’d broken into Purgatory twice, using modern firepower against them, to free others who didn’t deserve to be here. Those people were now free, which made it worth it, but I had no way of escaping without assistance. I was trapped here for my full three-month sentence.

In the caves we inhabited, it dropped to bone-numbing temperatures and the stone walls wept with the icy tears of its denizens. That wasn’t meant to be poetic. Purgatory had a way of torturing you with both your darkest memories and your most cherished. I’d had a lot of time to think since arriving. One moment I’d feel the pain of my worst mistakes, including those that led to the loss of good friends, and in the next moment I’d remember my lover, Lucas, or adopted daughter, Emily. They were part of the good things in my life, but the longer I stayed in Purgatory, the more I wished I didn’t think of them. It would have made my time easier that way.

This was an ugly place where nothing good belonged, especially in the bowels where I’d been confined. The walkways were frozen except for the occasional numbing cold stream running along the path. Sharp icicles hung from the ceilings, often falling on hapless victims. I’d had my head struck more than once—made worse by the fact it took considerably longer to heal in Purgatory than on Earth. It was also eerily dark. If not for the greenish-blue glow emanating from cracks in the stone, even those with the best night vision wouldn’t have been able to see anything. Then again, it didn’t seem to bother the guardians who lorded over their prisoners. They moved around just fine.

Clink. Clink. Clink.
The sound of pickaxes droned on in an annoyingly familiar rhythm. I suspected I’d hear them in my head long after I left this place. I blew a strand of my auburn hair from my cheek where it had come loose from its braid and continued chipping away at the blue-gray stone in front of me.

This section of the tunnel and I had become well acquainted since the archangel, Remiel, dropped me off here two and a half months ago. In that time, I’d managed to extract about five pounds of ore. The older and stronger supernaturals working alongside me gathered much higher amounts. Not that it really mattered. A cavern several levels above us had at least a dozen piles of it wasting away. The guardians had long since gotten enough to make all the chains and weapons they needed. They just wanted us to continue adding to the heap.

I rubbed at my aching lower back. Even an immortal body couldn’t handle fourteen hours of crouching in mines every day without getting sore. By the end of my shift, my spine always became so bowed out of shape that I could hardly stand up straight without a lot of effort and pain. If I never saw an underground tunnel again it wouldn’t be long enough.

The clinking of the axes slowed and whispers rose among the other prisoners. I took a surreptitious gaze around to find our guards had wandered down the tunnel out of earshot. It happened so rarely I had to seize the opportunity while it lasted.

“Eli,” I called softly to the dark-skinned nephilim hunched ten feet away.

He turned his head toward me. “What?”

Eli wore the same basic uniform as me—buckskin trousers, a matching sleeveless top and leather boots. We hadn’t gotten utilitarian clothing when we first arrived in Purgatory. They’d given us long robes that chaffed at our skin and no footwear. It made it difficult to navigate the treacherous tunnels. After a few days, I’d had enough and went on strike.

No one else joined me at first. I was a sensor, and the rest of the prisoners were nephilim. Our races were eternal enemies, but I was trying to change that. I’d mated with a nephilim, Lucas, and he’d made me immortal. Most of the supernatural world knew about us and how we’d found common ground. Some of them had grown to accept me, mostly in Alaska where we lived, but we had a long way to go before our races got along entirely. The majority of the sensors and sups still didn’t trust each other.

For three days, my prison mates watched me get whipped every morning because I refused to leave my cell for work in the mines. On the fourth day, Eli was the first to join me. We’d met a couple of times before, and he’d seemed more open than most. Eventually, all twelve nephilim participated in my little strike.

It wasn’t just the poor clothing choices I’d protested, but also the awful gruel they fed us every day. The lack of oxygen and stronger gravity of Purgatory drained us too much already. Poor nutrition made things worse. Immortals might not be able to die, but they could become severely weakened if their basic needs weren’t met. We needed humane treatment if we were going to have the energy to work.

The rest of my companions were centuries or even thousands of years old. They’d lived during times when the weaker always submitted to the stronger. It didn’t occur to them to demand more for themselves.

I was a modern woman and military veteran who believed in standing up for my rights. The ancient guardians running Purgatory had no idea how to handle me, but I had experience dealing with their kind before. In fact, I’d helped rehabilitate one of the worst among them. I just had to suffer through their punishments for a while before I got my way. Though it wasn’t easy—they nearly broke me more than once.

“How do you call on an archangel without a summoning stone?” I asked Eli. There was a bit of Denzel Washington’s features in him that always struck me, especially in the eyes and chin.

He was constantly telling me to keep my head down and stay out of trouble. Not that I did, and more often than not he got caught up in my battles with the guardians. It wasn’t like I forced him to do my bidding. Eli just had a need to help people no matter what it cost. We had that in common, which was why we were both stuck here.

“Because I need to know.” Working in the mines gave you a lot of time to plot. I estimated that in about two or three weeks—they wouldn’t give an exact date—I’d be out of here. I had things to do as soon as I got back home.

“Melena,” he said in a warning tone. “I’m not helping you again.”

“Let it go until we return to Earth.” He turned away and began swinging his pickaxe again.

“Come on,” I said in a pleading tone. “I just need to know how to summon an archangel.”

He ignored me. I considered throwing my pickaxe at him, but I couldn’t risk drawing the attention of the guardians. Not to mention the chain stretching between my ankle and a hook in the floor would keep me from getting the tool back. All the prisoners were restricted so that we couldn’t move more than a few feet.

Naked Earth by Eileen Chang
The Past Through Tomorrow by Robert A Heinlein
Criopolis by Lois McMaster Bujold
It Ends with Revelations by Dodie Smith
Traplines by Eden Robinson
Stardust Lost: The Triumph, Tragedy, and Meshugas of the Yiddish Theater in America by Stefan Kanfer
Soldaten: On Fighting, Killing, and Dying by Neitzel, Sonke, Welzer, Harald
Bird Brained by Jessica Speart
Wild Chase by L.A. Bressett
Age of X01 - Gameboard of the Gods by Richelle Mead
Our partner