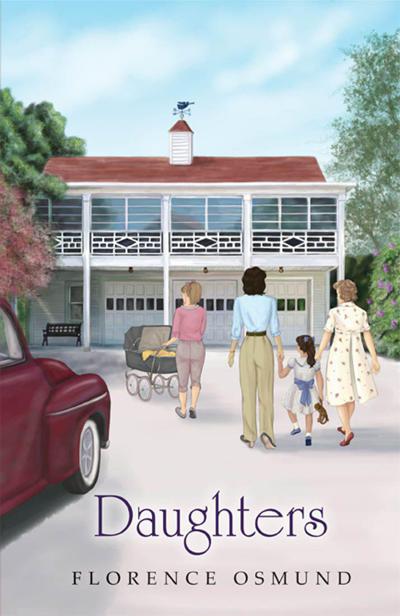 This book is dedicated to all those who have struggled with their identity at some point in their lives.

“To thine own self be true.” —William Shakespeare

CHAPTER 4: To Thine Own Self Be True

CHAPTER 5: ‘Til Next Time

CHAPTER 10: How Nice to See You Again

CHAPTER 12: That Kind of Child

I have the following people to thank for their assistance in creating this book.

Thank you, friends and family (you know who you are), for supporting me in my writing endeavors and giving me encouragement along the way.

A special thanks to Marge Bousson for giving the manuscript a final “once over” before being published.

Thank you, Carrie Cantor, for your invaluable critique of an early draft of “Daughters.” I continue to learn from you and hope some day I will be able to publish a book without your help (and I mean that in the most complimentary way).

Thank you, Claudia Estep, for providing Spanish translations for the dialogue between Rachael and Olivia.

And finally, thank you Team 2 at CreateSpace. It was a pleasure working with you.

Marie combed through her closet for just the right clothes to pack—nothing too fancy, nothing too casual, and definitely nothing too different from those worn by the people she was about to meet. She carefully considered the clothing, holding each piece up to her body in front of the mirror, and imagined how she would feel wearing it, how others would perceive her wearing it. Everything had to be well thought out for this trip. Her life was about to change.

Jonathan Brooks, her father, a man she had met for the first time just two months earlier in September, 1949, was going to arrive at her coach house apartment in less than twelve hours to take her to meet his family—her newfound family—in St. Charles, Illinois, for the Thanksgiving holiday. It was a ten-hour car ride from her home in Atchison, Kansas, and Jonathan promised her they could talk about anything and everything on the way.

“Anything and everything,” in Marie’s mind, meant nothing was off limits, and she intended to take full advantage of the opportunity. Jonathan had been married with three children when he had met Marie’s now deceased mother, and Marie knew very little about their affair. She wanted to know how they met, what they did together, how long the affair lasted, and what caused their breakup. Most of all, she wanted to know what had attracted them to each other in the first place. After all, Jonathan was a Negro, and her mother was white, a rather unlikely pairing in 1923 Chicago.

Discovering who her father was also meant discovering her own ethnicity. With olive skin, nut-brown eyes, and hair the color of raven’s wings, Marie could easily pass for white, and for the first twenty-four years of her life, she had. If it weren’t for her guilt and self-loathing, she could continue to pass for white, because that would be easier on so many levels. But her strong need to know who she really was and where she belonged drove her to find the answers, the truths about herself, and she was hopeful her father would be able to give her valuable insight.

Not having made much progress with packing, Marie took a quick dinner break. She thought about Jonathan’s family as she ate—his wife, Claire; their three grown sons; a daughter-in-law; and two grandchildren. What were the chances Marie would be accepted by all of them, and what kind of relationships would emerge from their first meeting? She didn’t know.

Marie’s best friend, Karen, who had offered to help her pack, arrived just as Marie was finishing her sandwich. Marie and Karen had met a year and a half earlier, the first week Marie had arrived in Atchison, only days after leaving her husband and home in Chicago. Karen had been a godsend, helping her settle into a new home and lifestyle those first few months, and despite their differences, it didn’t take long for the two of them to become fast friends.

Karen’s matter-of-fact values caused the two women to be worlds apart when it came to Marie’s ethnicity dilemma. If roles were reversed, Marie was certain Karen would accept the situation without any effort to change things—accept the ambiguity of being biracial, accept the bigotry in the world, and the lack of self-esteem Marie feared plagued many Negroes. Karen, Marie was sure, would aim low and settle for mediocrity. Not Marie. Marie had more idealistic goals in mind.

Karen, a year younger than Marie and widowed for three years, walked into Marie’s coach house apartment holding a bag from the clothing shop she owned. She handed it to Marie.

Marie pulled out a teal shirtwaist dress and matching short cropped jacket. “Karen…this is gorgeous.” She tore off her clothes and slipped on the dress.

“Like it? I love it!” Marie hugged her friend. “I don’t know what to say. Thank you! I think I’ll wear it on the first day.”

Karen shot Marie a sheepish grin. “Hoped you’d say that. It looks great on you, hon, but then everything does.”

The two women spent the evening picking out the right wardrobe for Marie’s two-week visit—skirts and blouses, several pairs of Capri trousers, a variety of sweaters, and nightclothes.

“What about the horses?” Karen asked.

“What about them?” Jonathan owned a horse ranch. He and his family were skilled riders.

“Shoot. I completely forgot about that.” She went to her closet and pulled out two more outfits. Once Marie had become aware of her father’s interest in horses, she had started taking riding lessons and bought her own horse shortly afterward—a three-year-old champagne gelding she named J.B., after Jonathan.

She put the riding outfits in her suitcase and looked up at Karen. “I think that does it.”

Marie and Karen talked well into the night over a few glasses of wine, something they did often.

“Well, I’m packed and ready to go, but honestly…how does one prepare for something like this?”

“What about your cat?” Marie’s cat, Sheana, was sitting on top of her suitcase.

“She senses I’m going away and doesn’t like it. The Edwardses have offered to take care of her.” Julia and Wayne Edwards were Marie’s landlords and lived in “the big house” with their three children.

When it was time for Karen to leave, the two women hugged, a little longer than usual, before saying good night. No final words were spoken; none were required—just heartfelt smiles going in both directions in honor of Marie, who was about to engage upon what could turn out to be the most important visit of her life.

Marie prayed the last gulp of Pepto-Bismol left in the bottle would be enough to settle her stomach. Her head hurt, too, and now she wished she hadn’t had that last glass of wine the night before.

Jonathan arrived right on time. Tall and well-built, he wore a robin’s egg blue Argyle sweater beneath a brown cashmere coat, which was a nice contrast to his café-au-lait skin. After giving her a fatherly hug, he glanced around her second floor apartment and said, “You did pretty well for yourself, kiddo. I’m proud of you.”

She responded with a smile. The coach house was situated well behind the main house, a three-story Victorian occupied by the Edwardses. “This place has been my sanctuary for the past year and a half. I was lucky to find it.”

The drawn window between the limo driver and the back seat enabled them to talk in private. Jonathan opened the conversation. “Well, Marie, let me start by telling you about my family, and perhaps more important for you, my roots…our roots.” Marie suspected his opening statement would be the essence of…everything. “My father was a mulatto. He was born a slave in 1843. His father—that would be my grandfather—was white and owned a cotton plantation in South Carolina. His mother was one of Grandfather’s house slaves.” His pause allowed Marie the opportunity for that to sink in. “Are you familiar with the one-drop rule?”

“So no matter how much or how little Negro blood you have in you, according to the one-drop rule—which is a white man’s rule by the way—you’re considered a Negro.” His words penetrated into her conscious. Hearing someone say it, him in particular, gave it new meaning. “I wanted to get that out in the open right away. It’s important you know who you are.

“My father was raised by his slave mother along side his two half sisters. He wasn’t allowed to go to school, of course, so he relied on the white children in the household to teach him to read and write. That was against the law, but they did it anyway, and it was something his dark-skinned half sisters were completely denied.”