Death of a Dapper Snowman 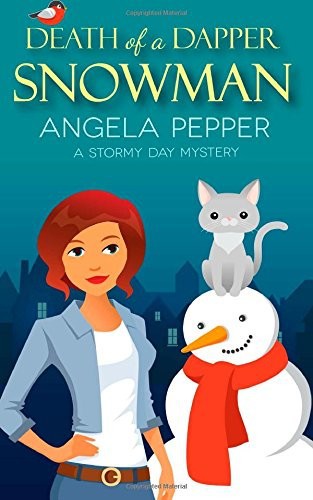 All rights reserved. This book or any portion thereof
may not be reproduced or used in any manner whatsoever
without the express written permission of the publisher
except for the use of brief quotations in a book review.

Each book in the series contains a complete, stand-alone mystery, but you may wish to read the series in order to follow along with other events in the lives of Stormy Day and friends.

For a current listing of Stormy Day books, checked your favorite ebook retailer or visit the author at
www.angelapepper.com

DEATH OF A DAPPER SNOWMAN

“
Death of a Dapper Snowman
is a great cozy murder mystery with clever clues, plus plenty of fun characters to make you smile!”

First book in a new series!

Gift shop owner Stormy Day is settling into her new life until she comes across a frozen body, hidden inside a well-dressed snowman.

When her own father is implicated in the murder, Stormy must chase down clues and uncover the town's secrets herself.

As she draws closer to identifying the killer, Stormy's own life may be in danger. That is unless Jeffrey, the mischievous Russian Blue cat who led her to the icy body in the first place, can flick his sleek gray tail at the final piece in the puzzle.

I was hiding
in the back office of my new gift shop when I overheard a woman harassing my staff.

“When was the last time you dusted that top shelf?”

I listened as my employee apologized for being too short to reach the upper level with the feather duster.

“That’s no excuse,” the woman said. “Get a ladder. Chop chop. You’ve got young legs, so get up there and make yourself useful.”

There was a clatter—the ladder being pulled out and put into action. I tried to focus on my accounting work and ignore the noise. It wasn’t just any local know-it-all badgering my employee. It was my father’s girlfriend, Pam, and I would be next on her list. Maybe if I kept quiet and hid under my desk, she would leave.

“Stormy!” she called out. “Stormy, I know you’re back there. I saw your car parked outside! Don’t you think that car is awfully flashy for Misty Falls? People will talk.”

I clicked the button to shut down the accounting program on the computer. The numbers weren’t looking so good. My father’s bossy girlfriend was almost a welcome distraction.
Almost
.

“Good morning, Pam,” I said with a pasted-on smile as I emerged from the office.

“She’s come out of her cave!” Pam exclaimed.

Pam snorted. “With the way that awful new haircut of yours is sticking up on top, people around here probably will mistake you for a bear.”

“Then I’ll put a crouton on my head and tell everyone I’m a Caesar salad.”

Pam stared blankly at me. Either she didn’t know what a crouton was, or she simply had no appreciation for my style of wit.

I wouldn’t call myself a snarky person, because I never mean to be cruel, but I do serve up a number of sarcastic quips each day. Whenever people are being ridiculous, my instinct is to make a joke and break the tension.

A little humor goes a long way in this world, and it’s certainly better than losing your temper all the time. Maybe I overcompensate, because of my name. People expect a girl named Stormy to throw tantrums. While I do live up to my name at times, my many jokes help keep me calm.

My employee, bless her heart, snickered at my crouton comment.

Pam looked me up and down. “Have you been sleeping? You have bags under your eyes. That haircut really draws my attention to them.”

I rubbed the back of my head, my fingers moving easily through my new pixie-cut hairstyle. After years of fighting my naturally curly hair, spending vast sums on straighteners so I’d look polished in business meetings, I’d finally found the haircut I should have always had.

Pam didn’t approve, though. Never mind that her own hair was barely two inches longer than mine.

“Stormy, you’ll never catch yourself another man with that woodchuck hair,” Pam said.

My employee, who was teetering on the top step of the ladder, feather duster in hand, came to my defense. “I like Stormy’s hair. She looks young and cool. I think she should put in streaks of color, like blue, or pink.”

Pam clutched her chest, pretending to have a heart attack. “Pink hair! Have mercy! What’s next? Tattoos?”

I gave my employee a quick wink to keep her quiet. As a matter of fact, she and I had been talking about tattoos recently. She said thirty-three was a perfectly fine age to get your first tattoo, and the local tattoo artist wouldn’t find that weird at all.

Smiling at the idea of getting a tattoo just to make Pam’s head explode, I asked, “What can I do for you this morning, Pam? Are you in need of a cup of coffee? Should we wander over to the paint-your-own ceramics place for some last-minute Christmas decorations?”

She answered by picking up something from the floor beside her—a plastic pet carrier. She set it on the counter with an angry clunk.

“I have a chore for you, since your father’s not around. Take that silly gray cat in to get fixed before she goes into heat.”

I peered into the cat carrier, expecting to see her Russian Blue cat. The carrier was empty.

“I’m afraid it’s too late,” I said to Pam. “She’s slipped into invisibility mode. Your cat has magical powers. The vet won’t be able to fix her if they can’t find her.”

My employee snickered again, earning herself a nice Christmas bonus.

Pam gave me a blank stare, my witty charms sailing right over her head. You’d think someone who chose to live with a rascal like my father would have a sense of humor, or at least be able to tell when someone was joking.

She sighed noisily and rolled her eyes. “That sounds like something your father would say.
You people
are so weird.”

“I’m weird? You’re the one with an invisible cat.”

“Obviously you’ll have to
catch
the cat first. That’s why I brought you the cage. She won’t come in when I call her. I’ve been yelling for her to come home for the last hour.”

I suppressed a smirk. “I can’t imagine why that didn’t work.”

Pam gave me a dirty look as she pushed the pet carrier along the counter toward me. “Your father should have taken care of everything before he took off on his trip. He’s got a lot of loose threads he needs to tie up before he goes gallivanting around.”

I bit my tongue. My father hadn’t “taken off” on anyone. He’d left town the day before to get a hip operation done in the city. He would be laid up in bed for the next few days, hating every minute of it, but to hear Pam talk, you’d think he was off gambling and watching showgirls.

Pam pulled on her winter gloves. “You’d better get moving. The cat was due at the vet an hour ago.”

I ran back to the office for my jacket, then came back for the carrier and escorted Pam out before she could find more chores for me or my employee.

“Don’t worry about the cat,” I said as we both stepped outside.

“I’m not,” she snapped, seeming even more agitated than usual. “I just wish people would take their promises and obligations seriously.”

“Trust me. I can handle getting one little cat to a veterinary appointment. You do realize that before I moved back here last month, I used to handle billion-dollar venture capital deals, right?”

“Just get the cat. Don’t go snooping around.”

Instead of explaining, she looked up at the sky, then glanced around us warily.

We stood on the sidewalk in front of the gift shop, on the main street of Misty Falls. I also looked around, taking in the view. The streets were lined with colorful storefronts, and the snow-capped mountains rose majestically in the background. It had just started snowing again, and big snowflakes fell between us and around us, bringing a peaceful hush to the world. For a moment, I felt like we were two painted figures inside the scene of a pretty postcard.

I looked down the street to the landmark mirror on Ruby’s Treasure Trove. It reflected more of the same Misty Falls postcard view, with fluffy snowflakes swirling as they fell from the heavens. If Ruby’s mirror had been a circle instead of a rectangle, it would have looked exactly like a snow globe.

Pam cleared her throat like she was about to say something.

I looked at her and waited.

Her cheeks reddened. She huffed for a moment, then turned around and walked up the street, muttering about errands and unfinished business.

It was 10:17am, according to the time on my phone. I walked around the gift shop to get my car, then drove toward my father’s neighborhood, where I would take a photo of myself with a dead body, then
discover
the dead body, in that order, before 11:00am.

Misty Falls was
supposed to be my getaway.

After working for the last decade in venture capital and nearly killing myself with overtime, I thought returning to my home town would feel like a vacation.

Between the headaches from my new real estate investments, and chores from my father’s girlfriend, I hadn’t gotten time for so much as a bubble bath.

I drove to the neighborhood where I’d grown up, and turned down the street where my sister and I had run lemonade stands during hot summer days so many years ago. With the snow all around, the memories seemed even more distant.

I parked my car in front of my father’s house and grabbed the pet carrier, ready to embark on my newest assignment.

The cat and I had only met a couple of times, yet I felt confident I’d be able to catch her. My business background had made me one of those people who never says
no
, never says she can’t do something.

The cat was sitting on my father’s porch, looking pretty, with her long legs, sleek gray fur, and elegant jade eyes.

The Brave Free Men by Jack Vance
Adam of Albion by Kim McMahon, Neil McMahon
Alice-Miranda at the Palace 11 by Jacqueline Harvey
The Midwife's Tale by Delia Parr
Hell Hath No Fury by Rosalind Miles
Fight For Her (Soldiers in Arms Book 1) by J.A. Bailey, Phoenix James
Learning to Ride by Erin Knightley
The Archimedes Effect by Tom Clancy
Mail Order Brides: A Bride for the Banker (Bozeman Brides Book 1) by Emily Woods
Slave to Sensation by Nalini Singh
Our partner