Read Doctor Who and the Cave-Monsters Online

Doctor Who and the Cave-Monsters 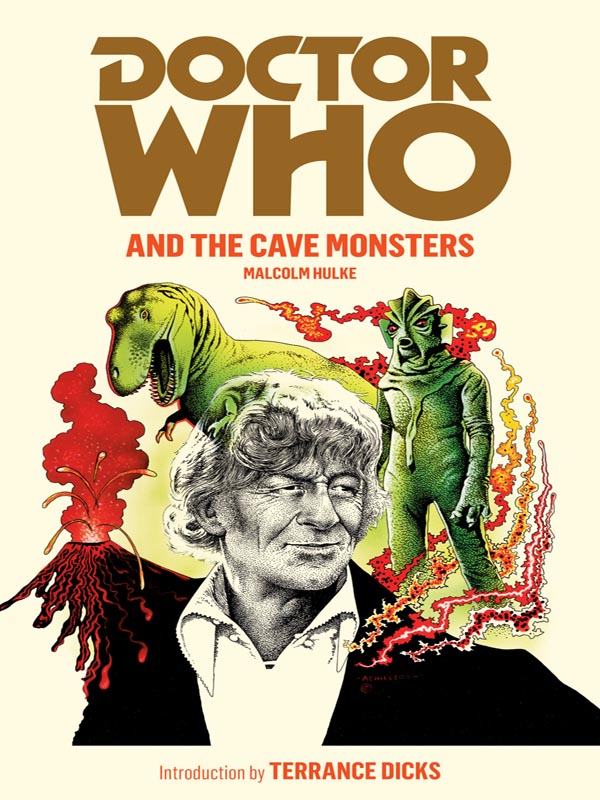 The Changing Face of Doctor Who

2. The Doctor Gets a Message

8. Into an Alien World

11. The Doctor Makes a Visit

14. Man from the Ministry

Okdel looked across the valley to see the tip of the sun as it sank below the horizon. It was the last time he was to see the sun for a hundred million years.

UNIT is called in to investigate security at a secret research centre buried under Wenley Moor. Unknown to the Doctor and his colleagues, the work at the centre has woken a group of Silurians – intelligent reptiles that used to be the dominant life form on Earth in prehistoric times.

Now they have woken, the Silurians are appalled to find ‘their’ planet populated by upstart apes. The Doctor hopes to negotiate a peace deal, but there are those on both sides who cannot bear the thought of humans and Silurians living together. As UNIT soldiers enter the cave systems, and the Silurians unleash a deadly plague that could wipe out the human race, the battle for planet Earth begins.

This novel is based on ‘The Silurians’, a Doctor Who story which was originally broadcast from 31 January–14 March 1970.

Featuring the Third Doctor as played by Jon Pertwee, his companion Liz Shaw and the UNIT organisation commanded by Brigadier Lethbridge-Stewart.

Born in 1924, Malcolm Hulke was a prolific and respected television writer from the 1950s until the 1970s, and wrote the definitive script-writing guide:
Writing for Television
. His writing credits included the early science fiction
Pathfinders
series, as well as
The Avengers
.

Malcolm Hulke was first approached to write for
Doctor Who
when the series was beginning production in 1963, but his idea for ‘The Hidden Planet’ was not pursued. In 1967, he wrote ‘The Faceless Ones’ (with David Ellis) for the Second Doctor. By 1969, Hulke’s friend and occasional writing partner Terrance Dicks was Script Editor for
Doctor Who
and needed a ten-part story to replace other scripts and write out Patrick Troughton’s Doctor. Together, they wrote ‘The War Games’, which for the first time explained the Doctor’s origins and introduced his people, the Time Lords.

Hulke continued to write for
Doctor Who
, providing a story for each of the Third Doctor’s five seasons. His scripts were notable for including adversaries that were not villainous simply for the sake of it, but who had a valid point of view and grievance. ‘The Silurians’ – which he novelised as ‘The Cave Monsters’ – is a good example of this, and the reptile men, like their aquatic ‘cousins’ the Sea Devils, are well remembered.

Malcolm Hulke died in 1979, soon after completing his novelisation of ‘The War Games’, which was published a few months after his death.

DOCTOR WHO AND THE DALEKS

DOCTOR WHO AND THE CRUSADERS

DOCTOR WHO AND THE CYBERMEN

DOCTOR WHO AND THE ABOMINABLE SNOWMEN

DOCTOR WHO AND THE AUTON INVASION 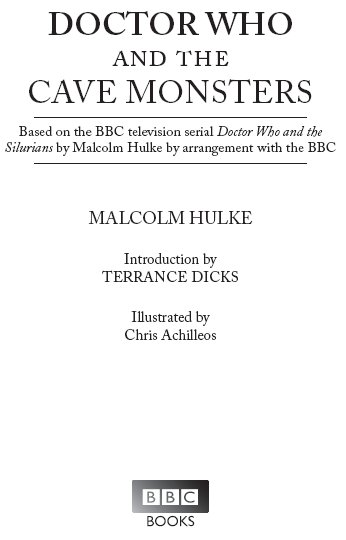 THE CHANGING FACE OF DOCTOR WHO
The cover illustration and others contained within this book portray the third doctor who whose physical appearance was altered by the Time Lords when they banished him to the planet earth in the Twentieth Century.
INTRODUCTION
BY
Terrance Dicks

It’s a great pleasure to write the introduction to Mac Hulke’s ‘Cave Monsters’ – or to give it its proper title, ‘The Silurians’.

(In the early days of the novelisations the first editor, Richard Henwood, would arbitrarily change the titles of stories to something he felt was more saleable. ‘Silurians?’ he said. ‘They’ll never understand that! We’ll call it “The Cave Monsters”.’ Later on, as the books gained in sales and status, the practice was quietly dropped.)

I take a particular interest in ‘The Silurians’, since it was written by my old friend and mentor Mac Hulke. We met, purely by chance, when I took a couple of rooms in the house he owned in Hampstead. We became good friends, and he gave me my start in television when we collaborated on a script for
The Avengers
. It’s a tribute to Mac’s generosity that he insisted on a joint credit and a fifty-fifty split on the money. Later we wrote three more
Avengers
scripts together.

Mac was, to put it mildly, quite a character. Short, balding and bespectacled, he had a razor-sharp mind and inexhaustible energy, and he was incredibly well organised. Behind a sharp-tongued, often acerbic manner, he was extraordinarily kind and helpful.

It was Mac who recommended me as one of the
Crossroads
writing team, and it was on
Crossroads
that I met Derrick Sherwin who called me some time later and said, ‘How would you like to be Script Editor of
Doctor Who…
’

Before I’d fully taken over from Derrick, he came into my office one day and said, ‘Two script projects have collapsed. We need a ten-part
Doctor Who
serial, you’ve got to write it and we need it next week…’

Naturally I turned to Mac. Together we co-wrote ‘The War Games’. Equally naturally, Mac was one of the writers I approached when setting up my first season of
Doctor Who
.

There’s another reason for my special interest in ‘The Silurians’ – I think I can claim that I came up with the original idea. Though, to be fair, the idea was sparked off by a shrewd observation from Mac.

It happened like this. By the time Barry Letts and I took over as Producer and Script Editor we were stuck with two ideas imposed by our two predecessors. The first was the Doctor’s exile to Earth, the second, longer serials – hence ‘The Silurians’ being seven parts. Both were attempts to save money, both were potentially harmful to the show. Four parts was the best length for
Who
, with the occasional six-parter. And the Doctor isn’t really the Doctor unless the TARDIS can go on its travels.

It was the Doctor’s exile that worried Mac. After I told him the news he brooded for a moment. You could almost hear the whirring of the computer-like brain. ‘Well, Terrance,’ he said at last. ‘You’ve now only got two stories, Alien Invasion or Mad Scientist!’

I told him he was being too negative, but as I went home that evening I had the ghastly realisation that he was almost certainly right… And I had a whole season to set up. How could I get away with alternating Invading Aliens and Mad Scientists? I brooded over the problem that evening, that night and most of the following day.

Finally inspiration struck. I called Mac on the phone. ‘Suppose the aliens were here all along, a reptile race that evolved before man? They’d regard us as the alien invaders!’

Silence from the end of the phone. I imagined I could hear that whirring again. Then Mac said, ‘Yes, I could do something with that.’ We discussed the idea further and before very long the storyline for ‘The Silurians’ arrived. The storyline became a
Doctor Who
serial, and, eventually, this book.

Now about that title. Once the basic premise was established – an intelligent reptilian species evolved before man, went into hibernation to escape a catastrophe that never happened, were accidentally awakened and wanted their planet back – the intelligent reptiles needed a name. Mac looked up a list of prehistoric period names and came up with Silurians.

Later, when the show was in production, Barry Letts had second thoughts. He said the reptiles and apes couldn’t have been around together during the Silurian period, and the reptiles should really have been called the Eocenes. Luckily things were too far advanced to change the name, so I gave the Doctor a line to cover the problem.

(Personally I was happy to stick with the Silurians, scientific accuracy be damned. The Silurians sound like a race of malignant intelligent reptiles. Eocenes just sound feeble. Later on, somebody said Eocenes was wrong as well – you just can’t win.)

Now, as for the book… and all the other books.

When Richard Henwood was given the job of starting a new line of children’s paperbacks, he bought up and republished three old
Doctor Who
hardback novelisations. Reissued in bright new paperback covers they sold amazingly well. Henwood came to the
Who
office and said, ‘I need more
Doctor Who
books – who will write them?’ ‘I will,’ I said, and novelised ‘Spearhead from Space’, rapidly retitled
The Auton Invasion
.

A system evolved that I wrote as many as I had time for – I was still script-editing
Who
– and found writers for the others. The job was always offered first to the writer of the original script - the work was his copyright and could only be novelised by him, or with his permission. If I novelised a script that was not my own – which was usually the case – the money was split fifty-fifty with the scriptwriter. (‘I do all the work and you get half the money,’ I used to say.)

Strangely enough, not that many scriptwriters were keen to novelise their own script. Scriptwriting and prose writing are very different jobs and many scriptwriters found it hard going. Bob Holmes said it was ‘Like digging trenches!’

Mac however was perfectly willing to tackle ‘The Silurians’ and did, as you’ll see, an excellent job adding a few embellishments of his own. I’m very glad that he did and that his book is being republished. Together with the VHS and DVD versions of the show, the book is a fitting memorial to a much-missed old friend to whom I owe a great deal.

The Changing Face of Doctor Who
The Third Doctor

This
Doctor Who
novel features the third incarnation of the Doctor, whose appearance was altered by his own people, the Time Lords, when they exiled him to Earth. This was his punishment for daring to steal a TARDIS, leave his homeworld and interfere in the affairs of other life forms. The Time Lords sentenced the Doctor to exile on twentieth-century Earth. The secrets of the TARDIS were taken from him and his appearance was changed.

While on Earth the Doctor formed an alliance and friendship with Brigadier Lethbridge-Stewart, head of the British branch of UNIT. Working as UNIT’s Scientific Adviser, the Doctor helped the organisation to deal with all manner of threats to humanity in return for facilities to try to repair the TARDIS and a sporty, yellow Edwardian-style car he calls Bessie.

UNIT in the United Kingdom is under the command of the ever-practical and down-to-earth Brigadier Lethbridge-Stewart. He first met the Second Doctor, and fought with him against the Yeti and the Cybermen. UNIT is a military organisation, with its headquarters in Geneva but with personnel seconded from the armed forces of each host nation. The remit of UNIT is rather vague, but according to the Brigadier, it deals with ‘the odd, the unexplained. Anything on Earth, or even beyond…’

From mad scientists to alien invasions, from revived prehistoric civilisations to dinosaurs rampaging through London, UNIT has its work cut out.

Doctor Elizabeth Shaw has an important research programme going ahead at Cambridge when she is invited to join UNIT. Before he encounters the Doctor again, the Brigadier has decided he needs a scientific adviser and Liz Shaw is an expert in meteorites, with degrees in ‘medicine, physics, and a dozen other subjects’.

One Child by Mei Fong
Cyber Warfare by Bobby Akart
Falling by Emma Kavanagh
Little Rainbows by Helena Stone
Expecting a Christmas Miracle by Laura Iding
Our Moon Has Blood Clots: The Exodus of the Kashmiri Pandits by Rahul Pandita
Full Coverage: Boys of Fall by Erin Nicholas
Sweet Convictions by Elizabeth, C.
The Death of WCW by R.D. Reynolds, Bryan Alvarez
All Just Glass by Amelia Atwater-Rhodes
Our partner