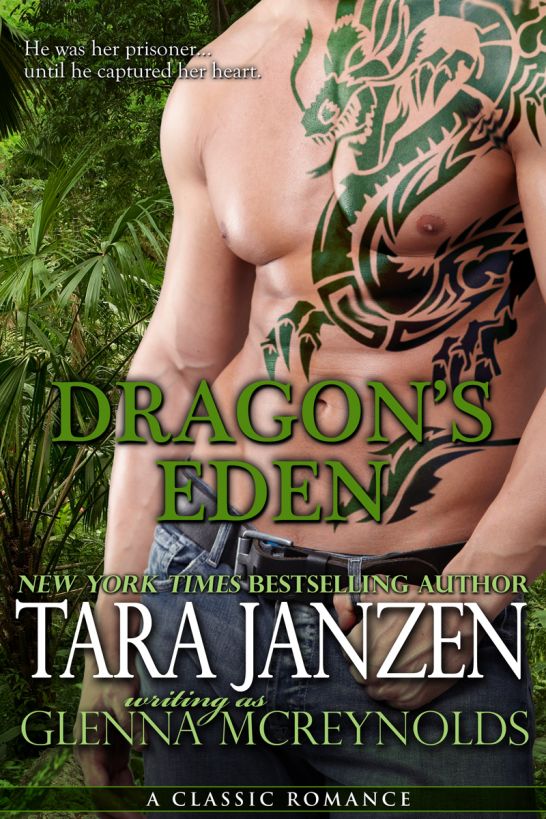 All rights reserved. No part of this book may
be reproduced or transmitted in any form or by any means,
electronic or mechanical, without permission in writing from the
author.

This book is a work of fiction. Names,
characters, places and incidents are either products of the
author’s imagination or used fictitiously. Any resemblance to
actual events, locales, or persons, living or dead, is entirely
coincidental

Excerpt: A Piece of
Heaven

Welcome to the Tara Janzen line of classic
romances!
New York Times
Bestselling author,
Tara Janzen, is the creator of the lightning-fast paced and super
sexy CRAZY HOT and CRAZY COOL Steele Street series of romantic
suspense novels. But before she fell in love with the hot cars, bad
boys, big guns, and wild women of Steele Street, she wrote steamy
romances for the Loveswept line under the name Glenna McReynolds.
All thirteen of these much-loved classic romances are now available
as eBooks.

Writing as both Glenna McReynolds and Tara
Janzen, this national bestselling author has won numerous awards
for her work, including a RITA from Romance Writers of America, and
nine 4 ½ TOP PICKS from
Romantic Times
magazine.
Two of her books are on the
Romantic Times
ALL-TIME FAVORITES list – RIVER OF EDEN, and SHAMELESS. LOOSE AND
EASY, a Steele Street novel, is one of Amazon’s TOP TEN ROMANCES
for 2011.

She is also the author of an epic medieval
fantasy trilogy, THE CHALICE AND THE BLADE, DREAM STONE, and PRINCE
OF TIME.

Thieves In The Night

A Piece of Heaven

The Dragon and the Dove

The Chalice and the Blade

River of Eden
–
“One of THE most breathtaking and phenomenal adventure tales to
come along in years! Glenna McReynolds has created an instant
adventure classic.” Romantic Times – 2002 BEST ROMANTIC SUSPENSE
AWARD WINNER

Steele Street Series
– “Hang on to
your seat for the ride of your life... thrilling... sexy. Tara
Janzen has outdone herself.” Fresh Fiction

SEAL Of My Dreams
Anthology

All proceeds from the sale of SEAL Of My
Dreams are pledged to Veterans Research Corporation, a non-profit
foundation supporting veterans medical research.

The island floated on the horizon in a
darkly azure sea, its windward edge painted into visibility by the
rising sun. Jackson Daniels leaned closer to the seaplane’s window,
watching the blush of dawn spread up the eastern flank of a tall,
jagged mountain. Morning mists wreathed the peak with gossamer
clouds and liquid sunshine, making the island look like paradise, a
tropical heaven on earth.

He turned away from the window, letting out
a short sound of disgust. Given the way his luck had been running
lately, his money was on the island being just a new version of
hell.

He looked down at the shackles on his
ankles, the handcuffs on his wrists, and the chain running between
the two inconveniences. It didn’t matter what the island turned out
to be, he wasn’t going anywhere, neither to heaven nor hell without
his jailer’s permission. That was for damn sure.

The plane banked, and Sher Chang, the
brutish behemoth sitting next to him, jerked him back from the
window, grabbing him by his wounded shoulder and digging his
fingers in hard. A curse lodged against Jackson’s teeth. From the
seat in front of him, he heard a woman’s murmured command to
release him. Sher Chang complied, and Jackson slumped forward into
a silent ball of pain.

He knew from experience that any show of
weakness on his part would be met with a generous dose of injected
painkillers, just as any show of strength was met with an added
shackle and chain. He couldn’t win. He’d been at the mercy of the
woman and her gang of Chinese pirates since . . . since forever, it
seemed.

A wry grin curved his mouth. The situation
could have been worse. Instead of the young woman named Sun Shulan
sitting in the front seat of the seaplane, his jailer could have
been her mother, Fang Baolian, dreaded pirate queen of the South
China Sea and the lady who’d had him shot for refusing her sexual
favors.

“Stop worrying, Jen. You’re like an old
woman,” Shulan said in Cantonese, her voice rising enough for
Jackson to hear her over the drone of the engines. She sounded
exasperated with the old man in the seat next to her. “She will
accept him onto the island, and she will take care he is not
harmed. I can do no better for him than to bring him here, away
from Hong Kong and my mother’s spies.”

She? Jackson thought, his body tensing in
spite of himself. He didn’t need another “she.” He didn’t want
another “she” running and ruining his life. He’d always known
maritime bounty hunting was dangerous work—pirates had only gotten
more daring and more ruthless over the centuries, not less—but he’d
never thought it would be a woman who finally brought him to his
knees, let alone three: Baolian, the “hell has no fury like a woman
scorned” contingent; Shulan, the one who had saved him for reasons
he’d rather not believe; and now the new “she,” the one who would
take him and keep him on a small strip of land floating between the
earth and the sky.

He, the hunter, had been trapped by women,
captured by women. His only consolation was in knowing his brother,
Cooper, had survived Baolian’s ambush on the godforsaken beach
south of Singapore where he’d been shot. Shulan had sworn that was
true, and Jackson believed the pirate princess. It was easy to
believe her when she held his hands in hers and gazed at him with
her warm amber eyes, her expression sweetly innocent, assuring him
she only had his welfare at heart. It was harder to believe her
when she had an extra chain added to his bindings. He wished she
would hurry up and ransom him, get the whole ordeal over with. He
could imagine no other reason for her interference in her mother’s
fit of deadly pique, despite her wild story of him being her
long-lost half brother.

The plane dropped in altitude, making a slow
descent into the mist. Within seconds, they were enshrouded in
impenetrable fog. The mountain and the island’s rolling green hills
were gone, along with the azure sea and the streaking brilliance of
dawn across the horizon.

An unexpected calm overtook him in those
silent moments of blind flying, a peace he shouldn’t have felt.
Maybe it was merely acceptance of the inevitable, but it felt like
something more, like a promise of life, or joy.

The fanciful thought brought another wry
grin to his lips. Joy. Right. He was losing it.

“Sedate him,” Shulan ordered, and his peace
shattered.

He swore, a vicious sound that had no affect
whatsoever on his jailers. He felt the prick of the needle and the
flood of warmth that always preceded a deep, dreamless sleep.

“When he’s out, take off the cuffs and
chains, and be careful with him.” Shulan’s voice came to him as if
from a far distance. “If he drowns in the surf, I’ll turn you all
over to my mother!”

Hell, he decided in one last hazy thought.
Not life. Not joy. The island was going to be pure hell.

Sugar Caine stood next to the wicker chair
closest to the bed, her gaze traveling the length of the man
sprawled facedown across the tumbled disarray he’d made of her
sheets. He was naked and beautiful . . . so beautiful, his body
intrinsically sensual, a tawny, seductive landscape of lean,
muscled curves and hard planes. Just looking at him started a wave
of longing in her heart. She’d been alone for so long.

Jackson was his name.
Jack Sun
. His dark hair fell forward, hiding his
face and draping his shoulder before disappearing underneath him.
Sunlight filtering through the jalousies that covered the leeward
windows made stripes of light and darkness across his broad back,
but most of his body was veiled by the deepening shadows of a
Caribbean afternoon. The soles of his feet were callused, as were
the palms of his hands. One shoulder was bandaged with white gauze,
and the rest of him was simply perfect.

A soft groan escaped him, a breath of pain
as he shifted. Concern drew Sugar’s brows together. She leaned
forward ever so slightly, ready to help him if he needed help, even
while she prayed he wouldn’t. She didn’t want to touch him. She
didn’t dare. She couldn’t afford to get that close to so much
trouble, and he was trouble of the worst kind, a magnet for danger,
a man marked for murder by Fang Baolian.

With the grace and languor of a slowly
awakening animal, he rolled onto his back, sending a silky cascade
of ebony hair sliding across his torso. The dark strands reached
his waist, curving across his sleekly muscled chest and abdomen
like a river of black satin. She’d wondered how long his hair was.
When Shulan’s men had carried him up from the beach at dawn, it had
been impossible to tell. The sky had still been too dark, his hair
tangled in his ragged clothes. Her concern then had been more for
his vital signs than his physical attributes.

She wished she could still say the same. Her
gaze lifted to his face, and she felt warmth bloom in her cheeks.
He was easily as beautiful as his half sister, Sun Shulan, and
equally exotic, a rare blend of East and West. Thick black lashes
fringed his closed eyes. His eyebrows were dark with a slight
curve, more like a red-tailed hawk’s wings than a shorebird’s. She
wasn’t surprised. Even wounded and sound asleep, he had the aura of
a predator.

The blush she wouldn’t have admitted to for
the world deepened as her gaze strayed to the juncture of his
thighs. He was beautiful, his hair there silky and dark, his
manhood glorious. Chastising herself, she reached down and pulled
the top sheet up to his waist, for all the good it did her. A
moment later he’d worked the sheet back off.

“That boy, he likes being naked, Sugar.”

Sugar took a moment to clear her throat
before she agreed with her friend. “I know, Carolina,” she said,
looking up at the tall black woman standing in the open
doorway.

“You want I should tell your papa that boy
is here?” Carolina asked, tying a bow in the yellow sash belting
her tangerine-colored dress.

A Mating of Hawks by Jeanne Williams
I'll Be Here by Autumn Doughton
House of Dreams by Pauline Gedge
Scornfully Hers by Pamela Ann
Suzanna Medeiros by Lady Hathaway's Indecent Proposal
McQUEEN: Las Vegas Bad Boys by Frankie Love
The Whale Has Wings Vol 1 - Rebirth by David Row
The Texas Billionaire's Baby by Karen Rose Smith
Literacy and Longing in L. A. by Jennifer Kaufman
The Lost Time Accidents by John Wray
Our partner