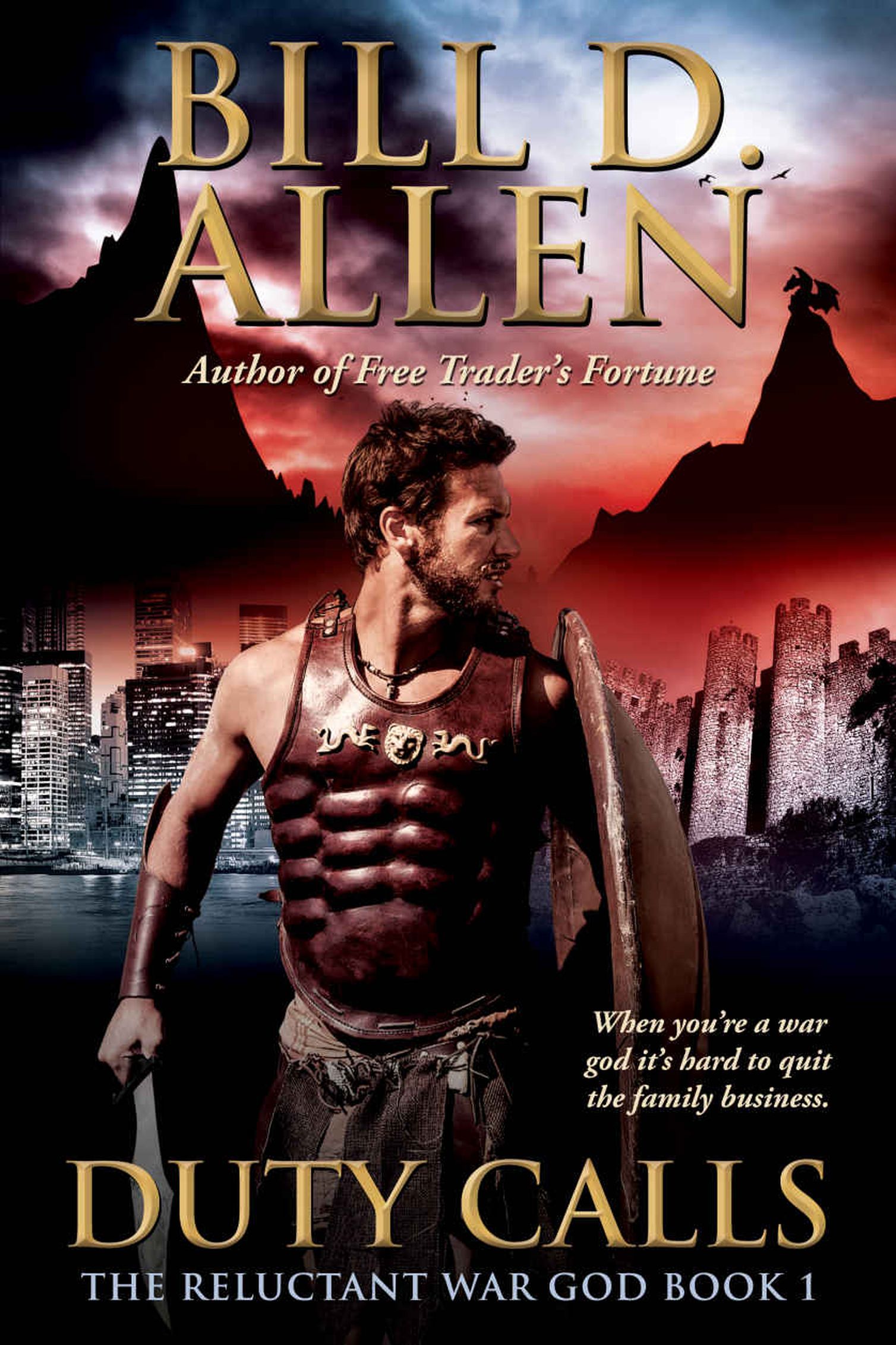 A Thank You Note From The Author

This book is a work of fiction. All the characters and events portrayed in this book are fictitious, and any resemblance to real persons is purely coincidental.

A shorter version of this story was published in 2005 by Yard Dog Press under the title of “Gods and Other Children”, part of a two-in-one book known as a double-dog—Yard Dog’s take on the old Ace Double books.

This greatly expanded version has original material not included in the novella and has been written to be part of a larger series of adventures for Carl, our reluctant war god.

Thank you so much for reading my book.
I hope you enjoyed it. If you did, please take the time to write a review. It helps readers find the type of stories they enjoy. It also helps writers keep the electric bill paid so we can keep the laptop fired up.

Sign up for my Favorite Reader’s List and get a free ebook. Not only that, but you will be notified first when my next book is available. Sign up at
billdallen.com.

DROP ME A LINE

Feel free to email me with any comments, questions, or requests. I am a real live person and I promise I don’t bite:
[email protected]
.

This one is for the kids Dylan, Shannon and my Arkansas daughter Lisa. I am confident that long after I am gone they will be keeping their kids weird to continue the legacy.

The problem with being a god is sooner or later someone will start to worship you. Your worshiper never turns out to be beautiful, young and nubile with amorous intent. (I appreciate a little debauchery in the name of religion, now and again.) No, your minions are mostly fanatical middle-aged warlords who come up with the brilliant and “original” notion of a holy war in your name.

You never live that one down, even if you’re immortal.

My name is Kaltron, War God of the Citadel, Prince of the Holy Golden Realm of Endear, Lord of the Bright Blade…blah, blah, blah. My name was shit as far as most people are concerned because of a few too many of those overzealous warlords. I can’t blame them, either. For the most part, I really have been a dick.

Time was, I’d try to turn around public opinion. I pushed the whole peace and brotherhood, goodwill and golden rule routine. It didn’t work. I don’t have the subtlety. It just isn’t in my wheelhouse. To be fair, it never works for any of the other gods either because most people suck, too. They don’t give anyone a second chance. I finally just gave up.

You have no idea how sick of it I’ve become over the ages.

I’ve gotten used to the way people spit whenever I’m mentioned. I can’t blame them. Too many of their kinsmen have been boiled in oil for my greater glory. Peace, love, joy and persecution. Nowadays, I lie low and go by the name of Carl. I leave the god business to my more egotistical relatives.

It’s a damn good thing I took up the lyre. The family business just doesn’t agree with me. But it doesn’t keep them from wanting me to come play whenever it’s convenient for them.

I was earning a little coin at an inn on the edge of Tunin Forest, in the Kingdom of Charlsan. I chose that version of reality between the veils because I have a sickening sense of nostalgia for the old days. This world still had the feel of simpler times. They haven’t mastered fossil fuels for engines, but they are making great strides with hydro-power. The best way to travel was still by horse-drawn coach and bread is made fresh every day and bought in the town market.

The Running Hare Inn was a way station on the main road to the capital. The great room stank of old farts, tobacco and sour wine. The clientele was a mix of peddlers, soldiers, and a couple of farmers in town for market day taking in a few tankards before heading home to their wives. Not so bad. I’d certainly played in worse. Mostly it was warm and dry. At my age, I place a lot of value in those things. Not that I look as old as I am, but sometimes I seem to feel it.

Outside a thunderstorm raged. Rain beat down upon the roof tiles and the wind howled accompaniment. I was about halfway through the Battle of Baxter’s Fiord when the front door flew open and a man walked in from the storm. Lightning crashed outside illuminating his face. A tremendous peal of thunder followed. I perceived something else about the man the mortals in the room could not. I saw the halo of electric energy floating above his head.

I grinned. It figured. How cliché for the thunder god to make that kind of entrance, but then again my brother has always been the melodramatic one.

He took a seat near the back and ordered some ale. Annie, the serving girl, brought him a pitcher and two mugs. From her reaction it was obvious he was being stealthy. His halo and aspect were hidden from mortals. She treated him no better and no worse than anyone else. She left to attend to other customers, not knowing she was in the presence of the gods.

Yond filled his mug to the top, and honored me with a small nod before he drank. He appeared satisfied to wait for me to finish my set.

Polite my brother is not. I knew he wanted something.

My song ended with many cheers and a few coppers. I gathered them up from the floor and left my seat near the hearth to meet Yond, my divine sibling.

“You still have a knack for storytelling,” he said as I approached. “I wonder if they realize how inaccurate the legend is.”

“The truth sucks. Wouldn’t be much of a song if they knew the Battle of Baxter’s Fiord consisted of a few farmers with pitchforks ambushing some dysentery-ridden deserters in their sleep. I prefer the song’s version of events, more inspiring—more likely to garner coppers for the singer.”

I took a seat across from him and looked into his eyes. “So, brother, how have you been?”

I smiled and refilled his drink from the pitcher, then filled the other cup for me. Thunder gods were usually pissed. It’s part of the persona. “Is there something in particular that’s got you hurling lightning bolts?”

He took his drink with a grunt. “Plenty, and our father is upset too. He sent me to fetch you back to the Citadel, the family needs you.”

“Our family always needs something. It’s completely dysfunctional. You can tell our father Pandron, he can leave me out of the drama.”

He glared at me with those eyes that would blind a mortal with their fury. “You’re one of us no matter how much you’d like to ignore it. It’s time to take up the Bright Sword. You can’t escape your duty.”

“Well, play time is over. You need to come back and take your rightful place. Father is furious you aren’t by his side. He needs you.”

“He’s the all father of the gods, he doesn’t suffer from
need
.”

“There’s trouble in one of the veils. A reality not far from here. A realm of the old days like this one. It lies on the rainbow span to the North—the Kingdom of Guldon,” He took a deep swallow, and then wiped the thin foam off his mustache with the back of his hand.

“So what’s happening in Guldon that’s upsetting our father who art in heaven?” I asked.

“A new religion has begun there. It’s spreading like a cancer. We’re not sure where it came from, but father wants it taken out.”

“Thirsty for some divine genocide? I don’t do that anymore. What do we care what people believe? It’s all a crock of shit anyway. People can believe what they want. It’s all nonsense anyway. We know little more than they do.”

He didn’t take the bait. He knew as well as I did the secrets of the universe were as mysterious to us as to mortal man. I took a sip of the ale.

“Remember when dad told us about the time he got it in his head to wipe out mankind? Said humanity was a bad idea and they’d gotten entirely out of hand.”

“The deluge thing was a long time ago,” Yond said.

“True. But what was the root cause of that particular crisis?”

“Of course you do. You just don’t want to remember. It was all because dad knocked up a sloe-eyed milkmaid. She gave birth to our youngest kin. What’s his name? Herman? Hank? Harold? No, it’s Ira…that’ s it. What a name. Anyway, the kid’s got the strength of a hundred men, but not enough sense to stay out of the rain. Mom was so pissed she made him destroy a world just to keep him from screwing around with the locals.”

“Okay, it sounds bad now. But you left out the fact mom went on one of her rampages, threatened to leave dad for a frost giant. Made a big, big deal out of the size of his… you know—that really pissed dad off. She threatened to cut him off for eternity and no manner of pleading, back massaging and showering her with jewels the size of boulders would change her mind. Dad likes his little mortal wenches, but when it comes down to it, you can’t beat immortal sex.”

I shrugged. “I really don’t want to discuss the sex lives of our parents… as such. I’m not sure being molded from chaos stuff and using the elemental forces counts as true parenthood, sounds more like craftsmanship.”

“If father hadn’t taken out the world, eventually he and mom would have come to blows and taken each other out and would have undone creation. The sky penis and the earth vagina would have been destroyed and the universe, and all the other gods, including you and me would have been unmade. You would have done the same thing. You know how she is.”

I looked deeply into the tankard. “No, I wouldn’t have. I’d have just walked away and let her take up with the frost giant. It wasn’t worth it. That’s the difference between me and the rest of you bloodthirsty jerks. I think the whole concept of the universe disappearing is dad’s typical crap. And, really dude? I don’t want to think about mom’s vagina any more than I have to. I need major psychological work as it is.”