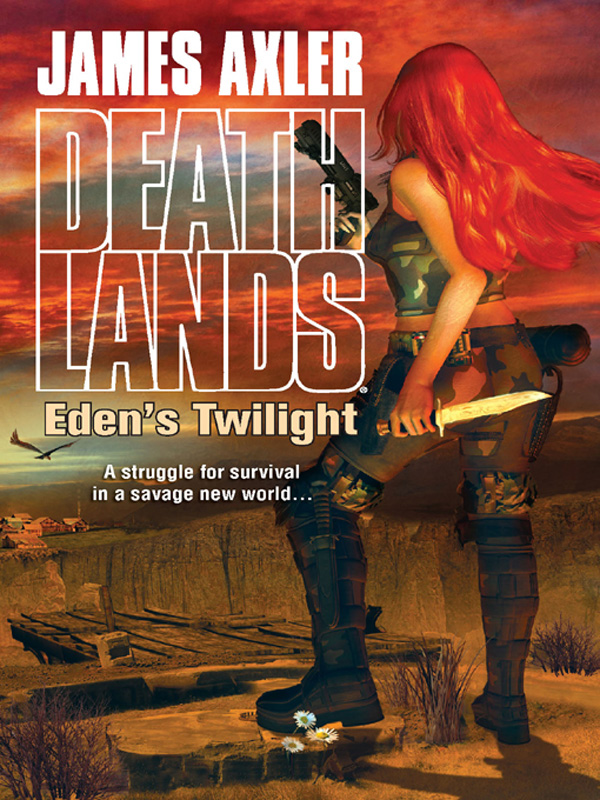 The deal was on the table

“Come along with us to Cascade. Lend a blaster if there's any chilling to be done on the way. The healer helps patch any wounds, and talks to the old-timers, and the six of you get a fair share of every trade I make,” Roberto stated.

Having done something similar a hundred times before during his years traveling with the Trader, Ryan was impressed. It was a fair offer. And the chance to see a predark city. Ryan got a flutter of excitement in his guts. He glanced at the others. Were they interested? Hell yeah.

Looking coolly at the man he had wanted to ace only a few hours earlier, Roberto marveled at the strange complexities of life. Friends became enemies, and enemies became friends, often in less time than it took to load a blaster.

“Done, and done,” he growled, and they shook.

Other titles in the Deathlands saga:

Keepers of the Sun

Way of the Wolf

The world was all before them, where to choose

Their place of rest, and Providence their guide:

They hand in hand with wand'ring steps and slow

Through Eden took their solitary way.

This world is their legacy, a world born in the violent nuclear spasm of 2001 that was the bitter outcome of a struggle for global dominance.

There is no real escape from this shockscape where life always hangs in the balance, vulnerable to newly demonic nature, barbarism, lawlessness.

But they are the warrior survivalists, and they endureâin the way of the lion, the hawk and the tiger, true to nature's heart despite its ruination.

Ryan Cawdor:
The privileged son of an East Coast baron. Acquainted with betrayal from a tender age, he is a master of the hard realities.

Krysty Wroth:
Harmony ville's own Titian-haired beauty, a woman with the strength of tempered steel. Her premonitions and Gaia powers have been fostered by her Mother Sonja.

J. B. Dix, the Armorer:
Weapons master and Ryan's close ally, he, too, honed his skills traversing the Deathlands with the legendary Trader.

Doctor Theophilus Tanner:
Torn from his family and a gentler life in 1896, Doc has been thrown into a future he couldn't have imagined.

Dr. Mildred Wyeth:
Her father was killed by the Ku Klux Klan, but her fate is not much lighter. Restored from predark cryogenic suspension, she brings twentieth-century healing skills to a nightmare.

Jak Lauren:
A true child of the wastelands, reared on adversity, loss and danger, the albino teenager is a fierce fighter and loyal friend.

Dean Cawdor:
Ryan's young son by Sharona accepts the only world he knows, and yet he is the seedling bearing the promise of tomorrow.

In a world where all was lost, they are humanity's last hopeâ¦.

Alone, the man stood on the edge of the cliff, the cool wind blowing over the rocky escarpment weakly stirring the dry leaves around his boots. A thick growth of ivy covered the ground like a living carpet.

Resting a hand on the automatic pistol holstered at his side, Dale MacIntyre gazed thoughtfully down into the foggy chasm. A cool mist rose from the thundering river below to moisten his face and clothing, the white-water rapids sounding like the distant thunder of a perpetual storm.

Had skydark sounded something like that, MacIntyre wondered, when a rain of nuclear bombs destroyed civilization in only a few hours? Possibly. But there was no way to know. That had happened a hundred years earlier, and not even the founding fathers told about such things in the doomsday book. Facts were few and far between. Nobody knew how the war started, why, how it ended, or even if it had ended. Perhaps the last remnants of the predark military were still battling ancient foes in some forgotten corner of the world. The fighting never seemed to cease. The fathers thought they had stopped the killing, but all they had done was postpone it for a few decades, nothing more.

Shaking his head to dispel the dark thought, MacIntyre shifted his stance a little farther away from the edge of the crumbling cliff. The Barrier River at the bottom could be heard, but it had never been seen since Last Day, when it changed from a gentle creek into a savage torrent of deadly
whirlpools, hot water geysers, jagged bouldersâ¦and creatures. Huge indescribable things of teeth and tentacles that lurked at the bottom of the river patiently waiting for somebody to cross, and then they would strike. The unstoppable lurkers moved lightning-fast, and the poor victims were still horribly alive when dragged below the churning water to vanish forever. Nothing could get across the Barrier River. Especially with the bridge gone.

Jutting from the opposite side of the chasm were the remains of a predark bridge, the broken steel beams extending for only a few feet before ending abruptly in ragged ends, the metal twisted and partially melted. The sagging girders were covered with rust and festooned with vines, the crumbling asphalt dotted with potholes and covered with moss. There was absolutely no sign of the bridge on this side of World's End, every trace of it carefully removed decades earlier. Then hundreds of trees had been lovingly planted by hand to create an artificial forest that completely hid the isolated farming community. The little town of Cascade was invisible, and unreachable.

We live in a damn castle, MacIntyre noted dourly, hitching up his gunbelt, with mountains for walls, the river as a moat, muties for guard dogsâ¦and me as the gatekeeper.

Dressed in the blue-and-gray uniform of a City Protector, MacIntyre wore his wavy brown hair cropped short, the black boots shiny with fresh polish. There was a discolored patch on his face from being caught in the acid rain as a teenager. The flesh puckered into a gnarled ruin, and the left side of his mouth curled back into a permanent snarl. A great many women found the disfigurement oddly attractive, as if it were some kind of badge of honor. A touch of the savage in their peaceful world. But MacIntyre considered it only a badge of shame. It was his own damn fault he'd been caught in the downpour. He had been drunk that night, using a full year's ration of whiskey in a single evening to try to burn out the
terrible memory of learning the truth about his hometown, and the locked back room of the sheriff's station. It was a shock to discover that everything he believed was a carefully sculpted lie. Some folks leaped off the cliff after the ceremony of adulthood, while others quietly went into a tub of warm water and slit their wrists, but the gaunt teenager had merely gotten royally drunk, permanently scarred and then joined the Protectors the next morning.

Now I'm the chief, MacIntyre thought, clenching a calloused fist at his side. His nails cut into his flesh, the pain strangely reassuring. And it is time for me to do a Harvest. Harvest! What a hideously deceptive word.

Suddenly there came the crunch of loose gravel from behind.

Ignoring it, MacIntyre didn't turn. There were no muties, coldhearts or slavers in Cascade. No warlords, kings, dictators or despots. Stingwings were the only real danger to Cascade, and the strong mountain winds that kept out the acid rains also served to repel the winged muties. Most likely, the isolated mountaintop community was the only safe place left in the world. The last bastion of civilization. I'm the most dangerous thing in Cascade, a natural-born killer, and they've asked me to leave.

“Have you made a decision yet?” a familiar voice said gently.

Glancing over a shoulder, MacIntyre frowned at the mayor of Cascade. Technically the woman should probably be considered the de facto president of the United States, as she was the only elected official in existence. But to claim the leadership of a nation that no longer existed would be the height of foolishness, and Henrietta Spencer was anything but a fool.

Dressed in a forest-camouflage-pattern military jumpsuit, the woman wore comfortable sneakers and a gunbelt that holstered a large-caliber revolver, the blue metal glinting dully in the afternoon light. Known as Etta to her friends, the middle-aged woman had gentle touches of silver highlighting
her long auburn hair, and a wide generous mouth. A very generous mouth, as he remembered. Etta possessed the most amazingly blue eyes he had ever seen, and her lush, womanly figure was completely covered with freckles. The childhood friends had become lovers over time, but had been forced to end the romance when they became the mayor and Chief Protector. Cascade was a democracy, and having the two most powerful people in town living together was getting a little too close to the creation of aristocracy, something the townsfolk would never tolerate. Now, in an odd twist of fate, she was sending him to his death.

Possible death, MacIntyre corrected. I might return alive. Others have before. Not all of them, but a few, so why not me?

Her warm touch brought back memories of youthful fumbling in haystacks, and then more adult pleasures in a soft bed before a roaring fireplace. Wine and laughter, an intimate touch, smooth bare skin, a heartfelt sigh. But that was too much to say, so the man simply nodded.

“When will you leave?”

Etta started to say something but stopped and wordlessly turned to start walking back into the trees. She did not enjoy being out in the open for too long. It seemed like tempting fate.

Listening to her leave, MacIntyre drew his gun and dutifully checked the load before holstering it once more. The man was glad she had not asked to stay the night. He might have accepted, and that would have only made leaving that much more difficult. And he already had enough on his mind planning for the harvest.

Studying the broken bridge for a while longer, MacIntyre turned away from World's End and started the walk back toward Cascade, his thoughts full of violence, betrayal and bloody death.

True to the Game III by Teri Woods
A Mate for the Beta: by E A Price
Fins Are Forever by Tera Lynn Childs
Notorious Nineteen by Janet Evanovich
The Triplets Mate Zoe by Cara Adams
The Bride Takes a Powder by Jane Leopold Quinn
Hammer & Air by Amy Lane
Abyss by Troy Denning
Misfortune: Christmas With Scrooge by Peggy Ann Craig
Timescape by Gregory Benford
Our partner