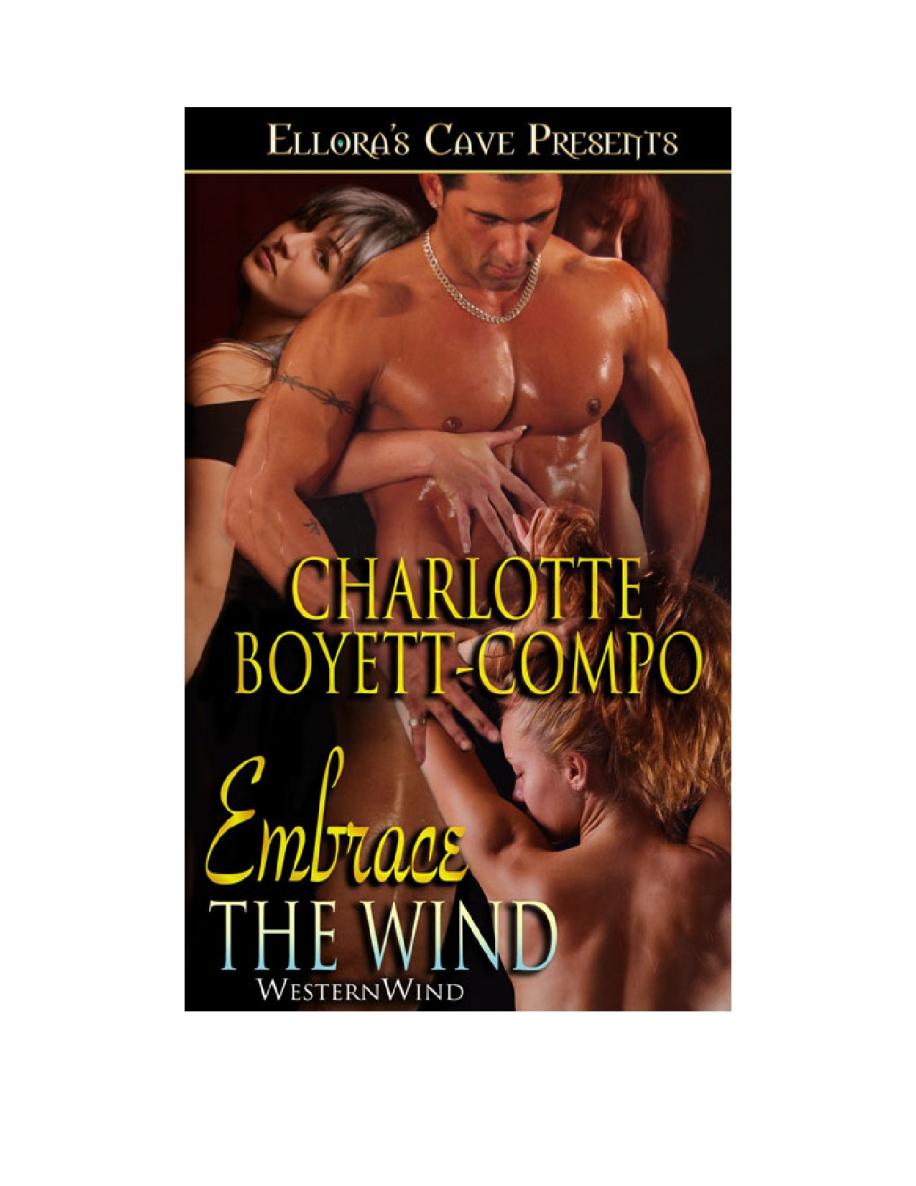 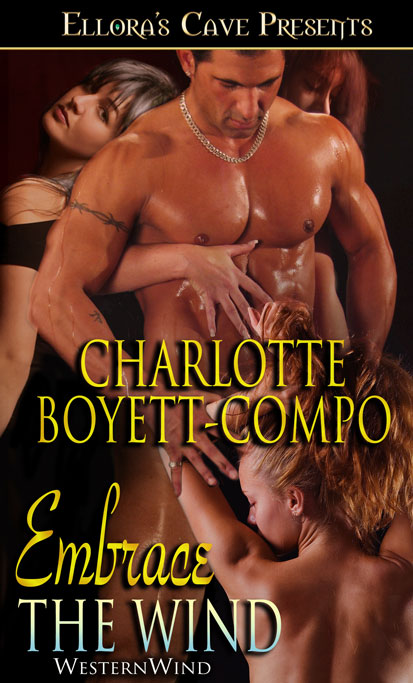 Three sets of very hungry eyes followed the handsome warrior as he strode—no,

shoved into the pockets of his black leather uniform pants. The flexing of the tight

look at him. From the black boots to the black kerchief around his neck, he was an

“He’s trouble with a capital T,” said the red-haired woman.

“And should be left alone,” the blonde observed.

“Or ridden until he begs for mercy,” the silver-haired woman said on a long sigh.

Her sisters giggled at the remark and giggling was something those two did not do.

It shocked them as much as it did their older sister. They exchanged glances with

he disappeared around a corner. They were silent for a long time then all three made

“We want him,” the eldest stated.

“Aye, we do,” the middle sister agreed.

“So what do we do about it?” the youngest inquired.

The silver-haired sister folded her arms over a lush chest. “We make him an offer he

bowed their heads respectfully to him.

“
Maddie vie
, Lord Kheelan,” they greeted the High Lord of the Council.

“Lady Argent, I would like to speak privately to you when you have a moment.”

With a slight inclination of his head, the most important man at the Citadel

continued on his way, gray robe rustling around his tall frame.

“What do you suppose he wants?” Corallin Tarnes, the red-haired woman, asked

Argent Ben-Alkazar pursed her sensual lips. “He intercepted our thoughts and

wants to bludgeon me with his unwanted, unwarranted advice as usual,” she said of

her brother. “What else?”

“Hold firm with him, sister. It is time,” Aureolin Belvoir suggested. “We are no

longer underage maidens. We are women and deserve to know the same pleasures as

“Have no fear, little sister, I intend to see he minds his own business,” Argent

“What he needs is a woman of his own,” Corallin said then lowered her voice. “One

who doesn’t belong to another warrior.”

“Shush!” Argent warned, gray eyes flashing. “We do not speak of that, Cora!”

Chastened, the red-haired woman lowered her head, her green eyes mirroring her

regret. “You are right. My apologies.”

“We have work to do, sisters. I shall see you at the
Coir Screeuee
,” Argent told her

sisters, referring to the desk at which the three of them worked.

As she made her way to the offices of the High Council, Argent began to plan what

she would say to her overbearing brother. He—along with the other two lords on the

High Council—could be very highhanded when it came to their sisters. Lord Dunham

Argent counted on to help her put her brother in his place.

“We are of age, Mother,” Argent said softly.

“
You are
,” came a soft, melodious voice from beyond time and space.

“And we believe this warrior is the
Graihaltagh Reiht
, the Chosen Lover.”

Argent’s heart soared. “Then we can have him?”

A tinkling laugh caressed the silver-haired woman.
“Only if you can snare the wolf,

daughter. He has spent many a year running from commitment. You will need to bring him to

“Please don’t let Khee interfere,” Argent pleaded. “He still thinks of me as a child

Aureolin in the same light. They are twenty-six and twenty-three but you would think

them still in swaddling clothes to hear their brothers tell it.”

“Kheelan has worries of his own, daughter, and both Dunham and Naois will stay out of

this. Tread carefully and your warrior will come to heel.”

The
Fer Gait Toshee
, the Primary Gatekeeper of the Citadel—the Terran fortress from

whence the Reapers were dispatched to protect mankind from evil—felt her mother, the

Ben Chiarn Mooar,
the Great Lady of the Multitude, fading away, and as she always did,

this distant world so many millions of light-years from their homes. A vital directive

continued existence of humankind. As
Breitheamhtái
, judges for the Multitude, it was up

to them to add their psychic powers to that of their brothers, the Shadowlords, to

“The Multitude will provide for you,” their mother had told them before the longrange cruiser upon which they were traveling had breached the airspace over Rysalia,

the home of the Ben-Alkazars. “When it is your time to find a mate, one will be sent to

Though it had been a lonely job so far away from their homeworlds of Rysalia,

Serenia and Oceania, the rewards had been great. The Multitude—the secret society of

enlightenment of womankind—had seen to all their needs.

Pure, untouched, the Gatekeepers had bided their time with patience and

unshakeable respect for Morrigunia, the Triune Goddess who governed them all. They

were in alignment. But watching the Reapers bring their mates to the Citadel, seeing the

precious fruit that had sprung from the unions of those warriors and their lady-wives,

the hunger for a man of their own had grown steadily. They wanted to know the love

between man and mate. They ached to discover the secrets of that part of life

whereupon man and woman gave and shared the greatest of gifts—themselves. They

longed for companionship and laughter. To them, it was far more than just the need to

happy, make him theirs. Give him peace as only they knew they could give it. As the

years passed, they worried the Chosen One would never come.

Shadowlords, Argent thought back to the first time she’d seen this immense fortress.

The Citadel had been built over the crumbling foundation of an older structure,

Burning War. Fashioned in the shape of a flattened star, the edifice was an imposing

and encompassing over six million square feet, the headquarters of the High Council

was an imposing site. There were ten sections—each dedicated to the defense and safety

of all of Terra. There was a section for each of the seven continents that made up the

planet, one section entirely for troops, another for maintenance personnel and workers

with the remaining section just for the use of the High Council and its Shadowlords.

Each Shadowlord had an entire floor to call his own. Behind the doors at which she

stood, the fate of mankind rested in the hands of three powerful men whose psychic

powers were immense. The most powerful of the three was the High Lord, her father’s

only son, her brother Kheelan.

she clenched her jaw, narrowed her gray eyes and reached for the handle.

with a grunt. “What’s up, brother mine?” he inquired.

His identical twin Owen shot him a narrowed look. “How were things in the

“Okay,” Eanan said, leaning back. He folded his arms across his brawny chest and

shot his legs out in front of him, crossing them at the ankle.

“Then why were you brought back to the Citadel?” Owen asked. “What the hell did

you do to make them recall you this quickly?”

Eanan cocked one shoulder. “How the fuck do I know? The Prime said I was to

report before the end of the month and here I am.” He glanced around the cafeteria

where he’d been ordered to meet his brother. “How does a man get a cup of coffee

“He gets his lazy ass up and goes over to the counter to order it,” Owen snapped.

He pushed his half-empty plate away and released an irritated breath. “Why do I have

this niggling feeling that you’ve screwed up, Eanan? Arawn is ready to retire and he

needs someone out in the Oklaks to take up the slack.”

Do Cool Sh*t by Miki Agrawal
Talking Dirty With the Boss: A Talking Dirty Novel (Entangled Indulgence) by Ashenden, Jackie
Rise From The Ashes: The Rebirth of San Antonio (Countdown to Armageddon Book 3) by Darrell Maloney
New Species 08 Obsidian by Laurann Dohner
All the Feels by Danika Stone
The Grieving Tree: The Dragon Below Book II by Don Bassingthwaite
Pleasure, Pregnancy and a Proposition by Heidi Rice
Reclaiming Nick by Susan May Warren
The Wrong Door by Bunty Avieson
Ghost Stalker by Jenna Kernan
Our partner