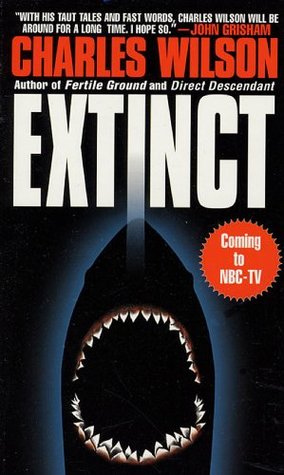 Praise for the Novels of Charles Wilson

To Linda, as always

My special thanks to those many people whose knowledge, research, and advice made this novel possible.

Finally, my thanks to two special friends of mine from Brandon who made criticism contributions to this novel from the time it began to take shape to its finale: first, to Tommy Furby, whose help on all my previous manuscripts has been above and beyond, but who helped more with this work than any before—especially with his intricate knowledge of the Mississippi coast and its “creatures”; and, to Alison Orr, who refused to let my opinion overpower hers—though I tried hard.

After all the highly knowledgeable help given me on this work, it goes without saying that any factual errors there might be contained in the text are solely attributable to me.

Dustin pointed his finger in the six-year-old’s face. “This is as far as you go, Paul—I mean it.”

Paul stared at the finger, and then past Dustin to the river spreading out across a wide channel behind the teenager’s back. Nearer the water a second teenager smiled at the confrontation as he unbuttoned his shirt. Dustin looked at him. “You going to help me, Skip?”

Paul narrowed his eyes. Dustin tried again. “I know you can swim fine, bud, but I told your mother you wouldn’t go near the water.”

“What about you?” Paul asked.

“I told her
you
wouldn’t go in the water, not us,” Dustin said.

Paul stared past him again. Across the river a heron suddenly flapped up into the bright sunlight. Curving its long neck back into an S above its body, the bird turned across the vast expanse of marshland extending out from the far side of the channel toward the long Interstate 10 bridge in the distance—and Paul’s gaze followed the bird’s flight.

Paul’s eyes went to the pockets of the teenager’s jeans.

Dustin pulled out a flattened pack of Wrigley’s Spearmint. “I’ll give you this now and buy you a sucker the next time I’m at the store.”

Paul weighed the offer with one eye nearly closed. He held out his hand.

“He’s lying,” Skip said. He had his shirt off now and was stepping out of his jeans.

Paul reached for the pack.

Dustin pulled it back.

“I heard a big bull alligator got after some people here yesterday,” Dustin said.

“He knows you’re lying now,” Skip said. In his undershorts now, he stepped to a frayed rope hanging down from a limb of a tall oak leaning out toward the river. Catching a grip high up the rope, he took a step backward, then jumped off the ground and sailed slowly past the bank, dropping into the warm brown water with a splash, sending ripples fanning out in wide circles toward the center of the channel and back against the bank.

Paul took the gum. “I’m warning you,” Dustin said. He pulled his T-shirt off over his head. Paul, pulling a stick of gum from the pack, theatrically stuck his foot out closer to the bank.

Dustin slipped off his jeans. “You stay here and I’ll let you take a drag off a cigarette when we finish.”

Paul pulled his foot back and began to unwrap the gum. Dustin caught the rope and, stepping back a couple of feet, jumped and grabbed it higher and swung out past the bank. Reaching the peak of his swing, he kicked his feet over his head and somersaulted backward into the water.

A large black Labrador trotted out of the trees behind Paul and stopped by the boy. It wagged its thick tail as Paul patted its head.

The Labrador edged closer to the bank and barked loudly.

But the dog wasn’t looking toward the boys. Instead, its muzzle was pointed downstream in the direction the river dumped into the Sound and, beyond that, the Gulf of Mexico. A hundred feet in that direction, the water sloshed gently against the bank.

Dustin got his hands on Skip’s head and pushed down. Laughing, barely able to get a breath before he was dunked, Skip disappeared under the surface. Dustin splashed away from the spot so Skip couldn’t grab his legs. Near the bank, he turned and waited for his friend to reappear. The Labrador barked again. Now it was looking directly at Dustin.

Skip did not reappear.

Dustin’s brow wrinkled. Slowly, he began to breaststroke toward the spot. He began to stroke faster. The Labrador barked repeatedly.

Close to the spot Skip disappeared, Dustin took a quick breath and dove under the surface.

Paul walked past the Labrador to the place where the bank started sloping steeply down to the water.

The dog came up beside him.

Paul looked at the foil wrapper from the stick of gum. He used his finger to shape it into a trough and sent it sailing toward the water. It curved in the air and landed at the bottom of the bank, where it sparkled in the sunlight.

Paul stared at the shiny scrap for a moment, then turned and, moving his leg backward down the slope, caught a grip on the edge of the bank and began sliding toward the water.

Carolyn Haines leaned back from the ledger sheets she worked on at the desk in her study. She slipped her glasses off and fluffed her hair off her neck. She looked toward the thermostat next to the glass doors leading out onto the sun deck, then stood and walked to the control.

She adjusted the temperature and started to turn back toward her desk but hesitated and looked toward the doors. She listened for a moment, then walked to the doors and slid the glass back.

Duchess’s loud barking reverberated through the trees between the rear corner of the house and the river.

Carolyn stepped out onto the sun deck and looked through the thick growth.

She waited a moment. The Labrador’s barking grew more agitated.

Duchess, her forepaws in the mud at the edge of the bottom of the bank, her head and neck stretched out over the water, barked rapidly, one sharp sound after another. Paul stood next to her. “Stop it, Duchess,” he said.

He pulled at her collar.
“Duchess.”

She suddenly moved sideways, bumping into him. He barely kept his balance.
“Duchess,”
he said, frowning down at her. She barked toward her left now. Paul looked toward the center of the river. Then he looked down the channel to his left. His eyes narrowing, he pulled a wad of gum from his mouth and looked up the bank to his right. Twenty feet out in the water in front of him, a gentle swirl twisted the surface and a faint ripple moved in a line toward the bank.

“Paul!” Carolyn yelled as she came out of the trees. “You’ll fall in!”

He looked up at her as she slid awkwardly down the bank and grabbed his arm. Tugging him back up the slope, she saw his questioning expression. Somehow she knew it wasn’t because of her pulling. At the top of the bank, he looked back at the river again.

Her gaze followed his.

Carolyn looked at the clothes scattered under the oak. Her eyes went back to the water. She looked down the river with the current and upriver to her left.

He kept staring toward the center of the channel.

Carolyn brought her hand up to cover her mouth.

Alan Freeman came up the side of the street at a fast jog, running effortlessly, his thick, dark hair whipping gently in the breeze, his loose T-shirt damp with perspiration clinging to his wide shoulders. Slowing for a Lincoln Town Car entering Boom Town Casino rising back to his left above the shoreline of Back Bay, he shortened his stride, then came around the automobile’s rear, resuming his pace. A couple of hundred feet farther he passed dozens of shrimping trawlers berthed close together off to his left, their long booms pointed up at an angle out to their sides.

Running past a rambling, broken line of aging boat repair shops, old ice houses and the shuttered front of an abandoned fish-processing plant, he kept his pace. Moments later, he began to slow and came to a walk. He raised the tail of the T-shirt to his face and wiped the perspiration away.

Crystal Fire by Kathleen Morgan
1953 - The Things Men Do by James Hadley Chase
Island Shifters: Book 02 - An Oath of the Mage by Valerie Zambito
Why Earls Fall in Love by Manda Collins
The Runaway Princess by Kate Coombs
For A Good Time, Call... by Gadziala, Jessica
Awakening Abduction by Becca Jameson
Pompeii's Ghosts (A James Acton Thriller, #9) by J. Robert Kennedy
Island of Darkness by Rebecca Stratton
Impact by Adam Baker
Our partner