Tessa (From Fear to Faith) 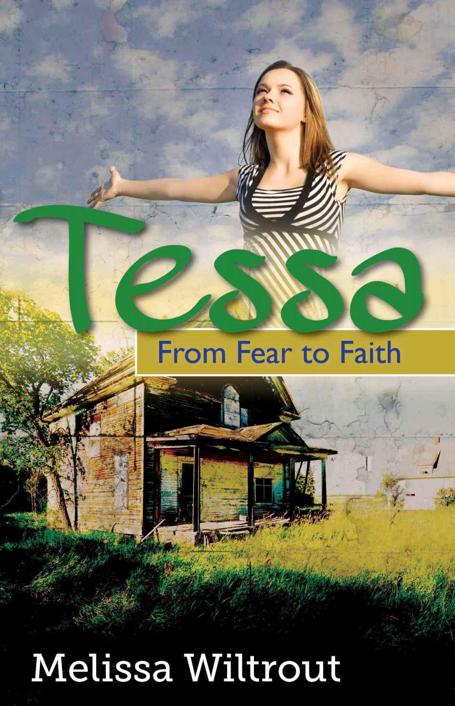 From Fear to Faith

Fear stabbed my chest. I dodged in front of a loaded shopping cart and shoved through the outer set of glass doors at Allen’s Super Foods. The plastic bag of hot dogs and bread knocked against my leg as I took a sharp left and sprinted down the dark sidewalk.

“Stop, you punk!” Footsteps pounded close behind me. I could hear heavy breathing. I ran faster, willing all my energy into my legs. My breath came in ragged gasps. I kept my eyes fixed on the lights of the busy street half a block ahead.
I sure hope there’s a break in the traffic. There’s no way I’m gonna be able to stop if there isn’t…

I had cleared the far end of the building and was racing across the final stretch of parking lot when the clerk caught up with me. He grabbed my shoulders and kicked me in the legs, slamming me to the pavement. I screamed as pain ripped through my right ankle and leg. He threw himself on top of me, closing huge hands around my neck and shoulders. “I got you now, you punk.”

His sudden weight on my back left me breathless. I struggled to roll him off, but he tightened his grip. His knee pressed into my back and his fingernails dug into my shoulder like claws. “Oh no you don’t.”

“That’s what you all say. I’ll get off of you all right – when the police get here.” As he spoke, he shifted his weight higher on my back. My chest began to hurt.

“Shut up,” he said. I heard a faint beep, beep as he pressed the buttons on his cell phone. I was crying. Sharp pains shot up my leg from my twisted ankle, and I was helpless to relieve them. Cold pavement bit into my chin. I tasted blood where I’d cut my lip falling. I made one more attempt to free myself, but it was no use. The guy must’ve weighed two hundred pounds. At last a police cruiser pulled up with its lights flashing, and an officer stepped out.

“You Bruce Sommerfeld?” he said to the clerk.

Bruce surrendered his grip on me reluctantly. “I caught this little punk red-handed. And it’s not the first time she’s pulled this. I can prove it.”

I took a breath and started to push myself up, but the officer stopped me, pulling my hands behind my back. Cold metal clamped around my left wrist, then my right. What on earth was he doing? Handcuffing
me? I hoped nobody was watching.

Fresh pain shot through my ankle as the officer pulled me to my feet. “So you were shoplifting, huh?” he said.

It wasn’t a dream this time. I was being arrested.

“I didn’t do nothin’. I swear!” Frantically I tried to wrench free of the steel cuffs. “He’s lying. He hates me. You all hate me!”

“That’s enough. Settle down.” A second officer, a woman, stepped close and took my other arm. She began steering me toward the black and white car. “My name’s Pat. And you are . . . ?”

I didn’t answer. My wrists stung from my fight with the cuffs. I had never felt so helpless and humiliated in my life.

Pat opened the rear door of the cruiser. “Okay, in you go.”

I hesitated as my eyes took in the hard black seat, the bars over the window, the mesh divider. This was for criminals, not for somebody like me. Did I have to get in? But the firm pressure on my arm told me I had no choice. I dropped into the seat, my face hot, wincing as my hurt ankle bumped the door frame.

I fit in there – sort of. There wasn’t more than eight inches of knee room in front of that seat, and with my hands squashed behind my back, I was miserable to say the least. They didn’t really expect me to ride like this, did they?

Tears pricked my eyes. I bit my lip hard to restrain them. Through the barred window, I saw Bruce enter the store with my bag of food. As if he needed it. My stomach growled, reminding me I hadn’t eaten since yesterday.

“How old are you, kid?” Pat twisted around to look at me from the driver’s seat.

“Old enough to be on your own?”

In the darkness, I felt my face flush.
Is it that obvious I’m a runaway?
I thought of the stains on my jeans, the long, jagged tear in the sleeve of my purple sweatshirt, and the shiny wire I’d used to reattach the soles of my worn tennis shoes – all things I had convinced myself no one would notice. I must’ve been crazy.

Heat blew into the back of the car, raising a smell of sweat and dirty clothes. I tried to flip back the tangled locks of dark hair that kept falling across my face. My teeth chattered, but not from cold. I was scared of being put in jail.

The ride to the Northford Police Station was short. Pat pulled into the garage. From there, she marched me into a long narrow room. I squinted against the glare of fluorescent lights. Pat removed the handcuffs and directed me to one of the plastic chairs at a small table.

I sank into the chair, glad to get off my hurt ankle. By now it had swollen to the size of a small grapefruit. The pain was agonizing. Had I broken it? I leaned forward and with one hand loosened my shoelaces. Even that was a painful operation. Making it all the way back to the garage where I was staying would be impossible.

“Did you hurt your ankle?” Pat asked. She pulled the other chair around to sit facing me.

I stiffened. “It’ll be okay.” Did she have to sit so close to me?

“You sure? You were limping on the way in.”

I hesitated, torn by the sympathy in her voice. But did I dare confide in a cop?

“It’s nothing, really. I-I got a charley horse.”

“I see. How long has it been since you left home?”

“Awhile.” My eyes traced the green and white tiles at my feet. If only I could get rid of that lump in my throat that threatened to make me cry.

“Yeah, maybe.” It had been longer, but she didn’t need to know that.

“That’s a long time. Have you been stealing food this whole time?”

“You know stealing is a crime, don’t you? You can be fined and even imprisoned for it. If you need food, there are better ways to get it.”

“No buts. Maybe no one’s ever told you this, but stealing is wrong. It’s serious. You ought to be ashamed of yourself.”

I could feel the heat rising in my cheeks. What did Pat know? She’d never gone hungry or spent the night under a deck in the drizzling rain. It wasn’t like I’d hurt somebody. The store would never miss what little I’d taken.

Pat shuffled a few papers on her lap. “I understand the store is not pressing charges this time. However…” She paused for emphasis. “If this sort of thing happens again, you will be charged with retail theft. You’ll have to go to court and pay the consequences. Plus it will get on your record. Do you understand?”

“Yeah.” I felt a tiny glimmer of hope. “Does this mean you’re gonna let me go?”

“It means your parents will have to come get you. I take it you’re not on the best terms with them just now. Am I right?”

I exhaled slowly. My sweaty hands clenched in my lap. I should’ve known they’d call my parents.

My mind raced. For a second I considered it, but then I shook my head. Talking would only make things worse. Much worse.

Pat was still watching me. “I’ve got the time,” she said.

I shook my head harder. “Can’t you just let me go? It’s not like I’m gonna do this again or something.”

“Sorry, but it’s not my call. Rules are rules.” Pat laid her papers on the table. “You’re Tessa Miner, am I right? And your parents are Walter and Julie Miner?”

I gulped. How did she know that?

“Is this phone number correct?”

I had to stop her somehow. “Look, you don’t hafta call them, okay? I-I’ll just walk home.”

“Ten miles with a hurt ankle isn’t far, huh?” There was sarcasm in her voice now. She shook her head. “It doesn’t work that way, Tessa.”

I was trapped. There was no way out. Even supposing the doors weren’t locked, I’d never escape with this ankle. The muscles in my chest constricted, suffocating me. I leaned my elbows on the table and forced myself to breathe. I needed to be at my best to face Walter.

Walter
. The name dredged up images I didn’t want to remember. I could see my father standing there, his hands on his hips as he screamed at me.

“You’re coming if I gotta drag you there! Now get out here!”

“Guess you didn’t listen, did you. Well, this time I’ll make you!”

I could see the home place – the shabby white house with its sagging porch, the huge junk heap in the back yard, and my dad’s green, almost-brand-new pickup truck parked in the driveway. I could smell the cigarette smoke and the coffee. I could see, too, the secret garden by the back fence that was my dad’s special concern. He allowed Mom to plant hibiscus and hollyhocks along the edge, but the rest was off limits. I learned this the day I tried to capture a baby rabbit that was trapped inside the fence. Walter caught me in there and beat me bloody, even though I hadn’t damaged anything.

I could see the old shed near the garden, where Walter had locked me up for two days after my last attempt at running away. I recalled the torture of spending a night leaning up against the lawnmower, my back aching like fire while I tried to ignore the rodents scurrying and chewing in the walls around me. I’d be lucky if that was all I had to face this time.

A sudden noise in the room caused me to start in fear. Had my father come already? But it was only Pat dropping a pen. I sank back, my heart still pounding. If only I could awaken from this nightmare. But try as I did, I could not suppress the memories which played like a bad movie across my mind.

I felt a hand on my shoulder. “Tessa, your father’s here.”