Read Father of the Bride Online

Father of the Bride 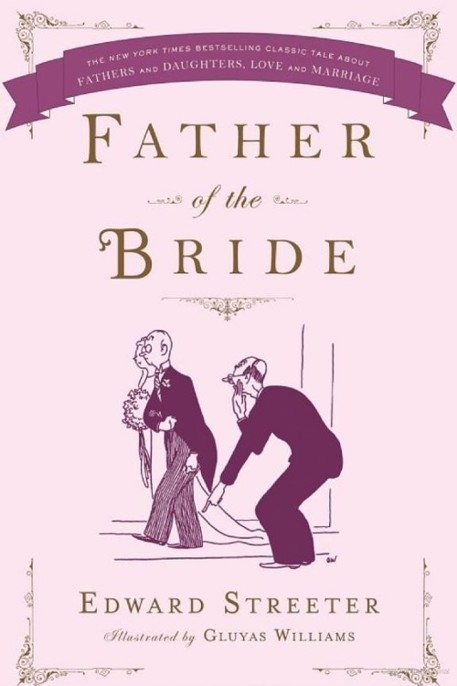 4. The News Is Broken

6. These Shall Be the Wedding Guests

10. It Is Easier to Give Than to Receive

11. Gentlemen’s Caterers All Are We

13. They’re Coming Into the Stretch

No matter what Kay might have done about marriage it would not have been looked upon with any great favor by Mr. Stanley Banks, merely because he happened to be fonder of his first-born than he realized.

During her teens he had dismissed all aspirants with a contemptuous snort. From the time that Kay had first revealed herself to the social world, minus a mouthful of braces and plus a permanent, leggy adolescents with porcupine hair had begun to beat a path to 24 Maple Drive. Mr. Banks had regarded these inarticulate sufferers with a jaundiced eye.

If they caused him any uneasiness it had been wasted. Not that Kay spurned male attention, but, during those exciting days, she preferred it to be universal rather than specific. Nature had endowed her with what amounted to a season pass to every dance, sporting event and weekend party that her strength permitted—and she had the stamina of a six-day bicycle rider.

She was also restrained by an early infatuation for her English teacher, a brilliant young man with large front teeth and a tendency to stomach ulcers, who had once told her that she had an intellect. This otherwise unconfirmed diagnosis gave her secret ambitions. The result was that the youths who fluttered around her with such uncoordinated eagerness seemed callow to her beautiful blue eyes. Lord Byron and Leonardo da Vinci being dead, the field had struck her as limited.

And so the tender years had slipped by. With their passing Mr. Banks’ emotional pendulum had swung the other way. He found himself wondering what was wrong with the child. What was it that caused men to bob into her life for a few brief weeks or months—and then disappear forever? She couldn’t go on being a bridesmaid until she was an old lady!

It worried him and unconsciously his attitude changed, even toward Kay’s most casual acquaintances. Unlike the old days, when he had been curt, suspicious and, on occasions, frankly hostile, he now began to receive them with an open-armed cordiality that would have driven any alert young male out into a snowstorm.

Mr. Banks had regarded these inarticulate sufferers with a jaundiced eye.

Then suddenly—without warning—it was obvious that something was happening to Kay. Some alchemy was at work within her. There was a light in her eyes that none of Dr. Barnes’ vitamins had ever kindled. The fashionable, dead-pan expression that she usually wore for home use was replaced with a radiance that made her, at times, almost a stranger to Mr. Banks.

“What’s gotten into Kay, Ellie? She acts queer to me.”

Mr. Banks made noises of contempt. “In love! Who would she be in love with?”

“I haven’t the wildest idea.”

“Nonsense,” said Mr. Banks. “You must have some idea.”

“Well, do you remember that about two weeks ago Kay said she’d met a boy named Buckley Something-or-other at a cocktail party?”

“Of course you have, dear. Don’t
try
to be stupid. And do you remember that a few nights later he came here to take her to some cocktail party?”

“You don’t mean that big overgrown ham with the shoulders? Listen, Ellie, you women jump at the damnedest conclusions. Just because a man—”

They waited, and as the days passed it became apparent that Buckley was coming more sharply into focus. His name crept into Kay’s chatter with increasing frequency, though always casually. It had never been very clear to Mr. Banks just where Kay spent her time, but wherever it was Buckley evidently spent his there also. Furthermore, he was apparently a young man with decided views on everything from football to God—views which, for Kay’s money, had not been equaled since the Delphic oracles went out of business.

Mr. Banks felt a resurgence of his old attitude. This new moth, which was beginning to fly so close to the flame, became definitely distasteful to him.

“I don’t think much of that fellow,” he said to Mrs. Banks after Buckley had spent a painful ten minutes in the living room waiting for Kay.

“I don’t know, dear,” said Mrs. Banks. “Why don’t you just leave Kay alone and let her work things out for herself?”

“I’m not interfering with her,” said Mr. Banks crossly. “You’re the one that’s always worrying.”

A hush of anticipation had fallen over the Banks family as in a theater just before the curtain rises—but nothing happened. Kay continued to look dreamy. Buckley, during his brief appearances, maintained his air of uneasy aloofness. After a few stiff moments they would both rush, unleashed, into the night.

Then, unexpectedly, the storm broke.

They were gathered round the dinner table on one of the increasingly rare occasions when Kay ate at home.

“Where are the boys?” asked Mr. Banks.

“They’ve gone to a night game with Joe Stanley,” said Mrs. Banks. “They couldn’t wait for dinner. Ben said they’d pick up something to eat in town.”

“Don’t those two boys ever stay at home for a meal?” grumbled Mr. Banks.

“Where are you going, dear?” asked Mrs. Banks.

“I’m going to spend it with Buckley’s family.”

Mr. Banks dropped an unbroken cracker into his soup. “Look here,” he asked, “are you going to marry this character?”

“I guess so,” replied Kay. She continued to work on her soup. Her tone had been so even and casual that the import of her words did not immediately register, and the conversation threatened to end on this simple note. As a matter of fact it did for quite a while. Nothing could be heard but the thoughtful intake of cream of tomato.

Mrs. Banks broke the silence. “And when,” she asked with timid sarcasm, “are you thinking of getting married?” 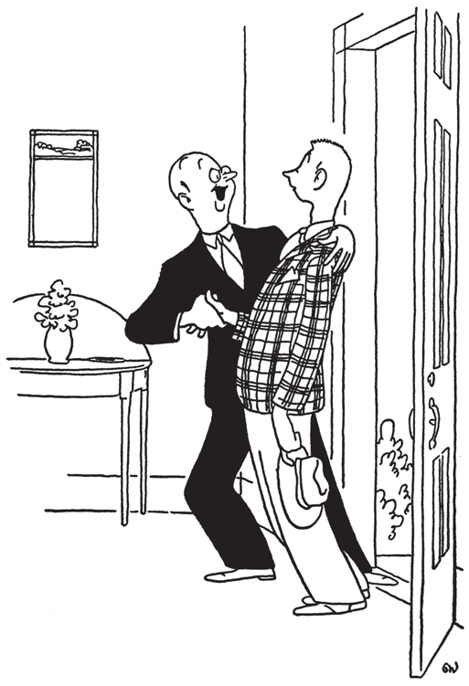 He now received them with open-armed cordiality.

Mr. Banks felt his neck begin to push against his collar. He took a long drink of water. “I hope,” he said in a strained voice, “that Buckley won’t think I’m nosy or trying to pin him down if I ask a few simple questions.”

Kay looked bored. “O.K., Pops. I suppose we have to go
through
this. It does seem to me, though—”

“Well, to begin with, who the hell is this Buckley anyway?”

“—and what’s his last name? I hope it’s better than his first one.”

“—and where the hell does he come from—and who does he think is going to support him? If it’s me he’s got another guess coming. And who in God’s name—”

Mrs. Banks interrupted. “Stanley, nobody’s deaf and you don’t have to swear every other word. It’s just plain mortifying with Delilah in the kitchen listening. You don’t give Kay a chance. Let her—”

At that moment Kay, the darling of his heart, turned on him for the first time in her life. “Listen, Pops, I’m twenty-four years old and Buckley’s twenty-six and we’re grown
people
—and as far as your supporting
Buckley
, I’ll tell you right now he’s the kind that wouldn’t let
anybody
support him. He’d rather
die
first.

“That’s
the kind of person he is. He’s a
wonderful
person. He’s the kind of a person that’s absolutely—I mean
absolutely
—independent. The kind that will always take care of his own. You don’t need to worry about
that,
Pops—
ever.
Buckley wouldn’t come to you for help not even if we were starving in the
gutter.

“And his name is
Dunstan. That’s
what it is—Buckley Dunstan. And he’s a
wonderful
businessman—I mean a
really
wonderful businessman—and—and he has a wonderful job.”

“Oh, I don’t
know
, Pops. He makes something. Does it
really
make any difference what it is? He’s the kind of a person that can do
anything
—anything at
all.

“As for his
parents
—well, I’ll tell you this, Pops—they’re just as good as you and
Mom
.” There was a suggestion in her voice that this was an understatement. “They’re
swell
people and they live in East Smithfield and I guess you’ll agree that East Smithfield is just as good a place as Fairview
Manor
—although I don’t see what that’s got to do with it
anyway.
”

His blood pressure had gone down as quickly as it had risen. He scarcely heard what Kay was saying and he had forgotten all about Buckley. He was looking at his daughter’s flushed face and remembering a small girl with brown pigtails and dirty overalls who used to fly at her two younger brothers when they goaded her too far.

It seemed like such an incredibly short time ago. That was all. He had a panicky feeling that tears were coming into his eyes. Rising from his chair, he kissed the top of her head.

At this point Mr. Banks began to come down with some strange kind of psychic rash. From the night of that conversation at the dinner table he could feel it creeping through his system. With a detachment which was anything but calm, he watched himself change from a logical, well-balanced lawyer into an unreasoning, anxiety-ridden psychopathic. It disturbed him so that he did not even mention it to Mrs. Banks.

Each night he lay on his back in the darkness, his hands folded across his chest like a figure on a sarcophagus in Westminster Abbey. A street lamp threw a milky patch of light on a corner of the bedroom ceiling. The intervening foliage of a tree caused it to shimmer like water. He stared at it rigidly, struggling to make his mind a blank.

Act of Treason by Vince Flynn
Sacred Flesh by Timothy Cavinder
Under Contract (The GEG Series) by Jacquelyn Ayres
The Duchesss Tattoo by Daisy Goodwin
Caveat Emptor by Ruth Downie
Adele, Claire - Guardian of His Love [Wolves of West Texas 3] (Siren Publishing Ménage and More) by Claire Adele
The Body Economic by Basu, Sanjay, Stuckler, David
Sammy Keyes and the Search for Snake Eyes by Wendelin Van Draanen
Dire Desires: A Novel of the Eternal Wolf Clan by Tyler, Stephanie
Doctor Who: Time and the Rani by Pip Baker, Jane Baker
Our partner