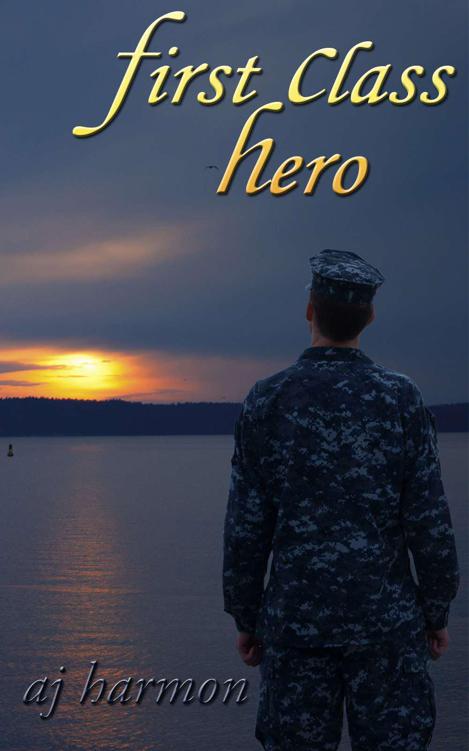 All rights reserved.
This book may not be reproduced in any form, in whole or in part, without
written permission from the author.

Lieutenant Commander Paul Lathem has served his country
proudly for eleven years as a navy Seal. He has risked life and limb to
preserve freedom and has loved every minute of it, but having entered his
thirties, he realizes he’s looking for more. He wants the wife and the kids and
the life he sees his older brother Matt enjoying. And he is sure he wants it
with Nic, but she isn’t convinced.

Born and raised in Norfolk, Virginia, Nic Stewart has had a
difficult childhood, with scars burned deep in her heart. Recently fired from
her job as a kindergarten teacher, Nic increases her employment search radius
and ends up in Manhattan, just blocks from the Lathems…and Paul.

Will Paul be able to soften Nic’s heart and rescue her from
the demons of her childhood? Can he convince her she deserves a love story?

What readers are saying about the ‘First Class’ novels:

“I’m loving this journey with the Lathem family. I like the
fact that whilst you get a glimpse at all of the family members and are given a
bit of the background for each character, A J Harmon has not forgotten the two
main characters who started the series, Matt (who I fell in love with-move over
Christian Grey!!) and Janie and we see more of how there lives have changed as well!!”
cj on Amazon UK

“Absolutely love this series, can't wait for the next one.”
SaraLou on Amazon UK

“Have read all 4 of the books and will defiantly read all 8
cannot wait for the next one, have really enjoyed following the lives of the
Latham clan.” C Crook on Amazon UK

“I so enjoyed this author and this series. I highly
recommend buying all four as you will be looking for the next one so after
finishing the previous one I can't wait for the next series!” Kerry on Amazon

I have always held a deep respect for those selfless men and
women who serve in the military to defend the freedoms many of us take for
granted. I had to stop watching the news for a while because it broke my heart
to hear of more soldiers dying in the Middle East.

Corby, my soon-to-be son-in-law, serves in the U.S. Navy and
I am incredibly grateful to him for his willingness to sacrifice his life if
necessary to defend his country. What a brave and admirable young man he is! I
think that when I wrote Paul for the first time I made him a Navy Seal because
not only do we think of the Seals as strong and hunky, they also represent
everything that is good about men in general. And while Corby isn’t a Seal, he
represents everything that is good; courageous, selfless, strong, and
intelligent – a real-life hero.

With his duffle bag slung over his shoulder, Paul Lathem
exited the Norfolk, Virginia airport and searched through the maze of cars for
his ride. Ed was always punctual so he was sure to be there and Paul didn’t
want to keep him waiting.

After several seconds of scanning the crowd, Paul spotted
him about twenty-five yards down. Their eyes locked and Ed nodded. It had been
a couple of years since Paul had seen his former Seal Commander, but the buzz
cut and big grin were difficult to miss. He jogged to the Volvo station wagon
and dropped his bag at the curb as Ed threw his arms around him.

“So good to see you, Paul. I’m really glad you called.”

“Me too,” Paul smiled. “I feel better already.”

“Something wrong?” Ed’s demeanor immediately changed and
concern was written all over his face.

Paul grabbed his bag and threw it in the back seat of Ed’s
car.

Ed chuckled. “Three is plenty.” He started the car and
maneuvered through the traffic to get out of the airport.

“I’ve got a reservation at the Marriott,” Paul said.

“Nonsense!” Ed blurted. “You’ll stay with us. Mariah
wouldn’t have it any other way. And neither would I.”

Mariah Branson sat in the backyard watching her two oldest
children play; Ava was four and Chloe two. They laughed and ran as they blew
bubbles. When they saw their dad walk through the sliding glass door, they
screamed “Daddy” and ran to him. Ed scooped them up into his arms and kissed
them both as they eagerly asked him to come and push them on the swing. He
stepped onto the lawn to fulfill their request.

Mariah stood and took two steps to Paul and hugged him
tightly. “It’s so good to see you,” she smiled. “It’s been far too long.”

Paul kissed her cheek. His decision to come to Virginia was
confirmed as he sat on the deck and watched Ed play with his girls.

“Let me grab you a beer,” she said and stepped inside the
house.

Paul leaned back in the chair and took a deep breath.
How
does he do it?
he wondered. Ed had been his superior and his Commanding
Officer for four years. Paul learned almost everything he knew about being a
Navy Seal from him. He’d put his life in Ed’s hands on many occasions and had
never regretted the decision. Ed had been his boss, his mentor, and his friend.
Ed was a Seal,
and
he was a husband and father and Paul needed to
understand how he was able to do it all without one getting short-changed.

Mariah returned with two bottles and handed one to Paul, the
other she sat on the table.

“I’ve made up the baby’s room for you. Alex still sleeps in
our room, so it works out perfectly.”

“I don’t want you to go to any trouble, Mariah. I can easily
stay in a hotel,” Paul said.

“Me?” asked Ed, as he lifted the bottle from the table and
kissed Mariah’s cheek. “Thanks, hon.” He popped the top and took a gulp.

“Yes, you,” Mariah laughed. “But only sometimes.” She stood
and turned to go back into the house. “Dinner’s in twenty.”

Nic stood in front of the bar and waited for her table’s
drink order. It was Thursday and it wouldn’t get very busy tonight.
Not much
in tips again
, she thought as she watched Brian, the bartender, fill the
glasses. It had been almost a year since she’d been laid off from her job.
Being a kindergarten teacher was her dream and she’d had it pulled out from
under her last June. At the end of the school year she’d been called into the
principal’s office and told that due to budget cuts she would no longer be
employed. Jenny, her boss, had said it wasn’t personal, but Nic knew better…or
at least assumed. Jenny was a spiteful, petty woman who had come to River Grove
Elementary two years after Nic had started working there. None of the faculty
knew how she’d gotten the job as principal, let alone kept it. It seemed to Nic
that all she ever did was whine to her small group of friends about the
teachers she didn’t like, and Nic, for whatever reason, was at the top of the
list. Nic had been the last kindergarten teacher hired so Jenny said she would
be the first to be laid off. Two days later, Jenny had hired a new P.E. teacher.
Nic got the message loud and clear.

The long summer had been spent applying for jobs in
Virginia. When nothing panned out, she expanded the search to the Carolinas,
Maryland and Pennsylvania. She had gotten an interview in Baltimore but didn’t
get the job so her friend April had introduced her to the owner of ‘Hank’s Bar
& Grill’ and he hired her on the spot. While grateful for a job, her
college degree would be put to better use in an elementary school. Yet here she
was eight months later still serving drinks to men she would cross the street
to avoid if given a choice. She didn’t like Navy men and the bar was always
full of them.

Ed and Mariah were already up and in the kitchen when Paul
crept downstairs.

“Did we wake you? Sorry,” Mariah frowned.

“Nope, not at all. You guys are up early though,” Paul
replied.

“I’m a Navy wife with three kids…I don’t sleep much,” she
chuckled.

Ed sat at the breakfast bar and sipped on his coffee. He was
in running shorts but his feet were bare.

“Just got back or just about to go?” asked Paul.

Paul ran back up to his room and grabbed his sports watch.
As he re-entered the kitchen Ed was tying his laces and was ready to leave. He
kissed his wife on the cheek and slapped Paul on the back. “Let’s go.”

The spring morning air was crisp and the sun was shining. It
was going to be a beautiful day. Paul had run track in high school, and as far
back as he could remember he’d started his day with a run. Being a Seal he
needed to keep his body in prime condition; he lifted weights, swam, and used kettle
bells, but running also helped to keep his mind clear.

“You up for eight miles?” Ed asked.

“For sure,” Paul smiled. Eight miles was easy.

The men stretched in the driveway for a couple of minutes
and then walked to the street.

They started slowly, giving their bodies an opportunity to
warm up and get the blood pumping. At this pace, conversation was still possible.

“So, I’m curious what brings you here,” Ed began. “When is
your leave up? When do you head back to Coronado?”

Paul had been based in Coronado, California, for the past
twenty months. He was the Operations Officer with Seal Team Seven.

Paul looked at his friend.

“I can see it,” Ed chuckled. “You forget I know you like I
know myself.”

Paul grinned. Ed was right. They were like brothers and Ed
could read him just like his older brothers Matt and Mark. There was no way to
try to hide anything from
any
of them.

“So have more,” Ed replied matter-of-factly.

“It’s not that easy,” frowned Paul.

“I can’t leave a wife behind and not tell her where I’m
going, what I’m doing or when I’ll be home. It’s not fair.”

“It’s better than her knowing. Believe me.”

“So what do you tell Mariah?”

“It’s different now. She knows what base I’m going to and
when I’m coming home. I lead the missions but I don’t leave the base. She knows
I’m no longer directly in harm’s way. She handles it very well.”

“And before?” Paul asked.

Ed paused. “Yeah. Before it was much harder. It’s why I
became an Instructor at BUDS.”

BUDS, Basic Underwater Demolition Seal, was in Coronado. It
was where all the Seals did their training and there wasn’t anyone more
qualified to teach how to be a Seal than Ed. It had been a hard decision for Ed
to leave BUDS and relocate to Virginia to accept his current assignment.

“So you did that for Mariah?”

“For Mariah and Ava. She was still a baby but I wanted to
make sure that she knew her dad. My priorities changed the second she was
born.”

“Not for one second!” His reply was swift and definite. “Not
one second!”

Nic sat at the kitchen table staring at the screen of her laptop.
She was in the ‘Classifieds’ section of the NY Times. Sadly, her job search was
expanding to several hundred miles away now, there just wasn’t anything close
to home. She printed out a couple of postings and closed her laptop a little
harder than she should.