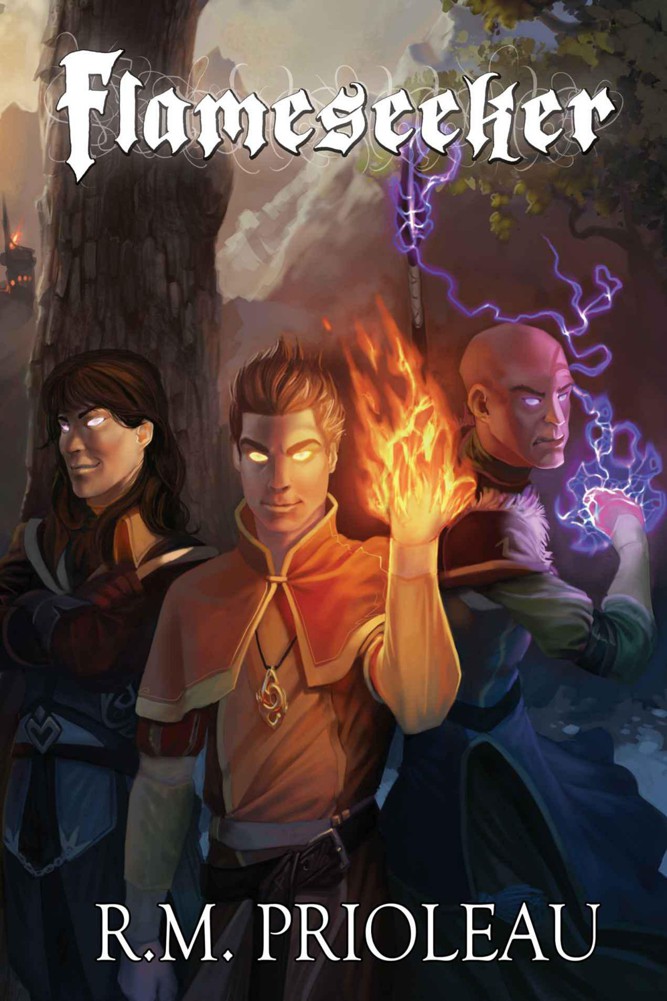 Book 3 of
The Pyromancer Trilogy

This is a work of fiction. Names,
characters, places and incidents are the products of the author’s imagination
or are used fictitiously. Any resemblance to actual persons, living or dead is
purely coincidental.

No part of this book may be used,
reproduced or transmitted in any manner without the express written permission
of the author. All rights reserved.

Kaijin lay on his back in bed, playing with a
small flame he’d summoned in his hands. The ball of fire burned brightly,
casting shadows that danced on the ceiling. The flame-shaped charm he wore,
secured to a lengthy necklace, shone in the light, every intricate golden line
traced in fiery red. He focused on the flame, entranced by its swirling colors
and varying movements. He and his friends who’d accompanied him had only
arrived the day before, and he was exhausted.

While he remained at the Pyre—his destiny—Kaijin
knew he would seldom have opportunities to spend time by himself. He hadn’t
even bothered undressing fully, only managing to take off one shoe and undo a
button or two on his robe before plopping in bed. It was wonderful to sleep in
a bed again and enjoy the silence of peaceful respite rather than the howls of
animals and forest creatures. With his friends having left him to the sanctity
of the Pyre, Kaijin figured they’d moved on to better opportunities.

But what would have happened if they had
stayed?
Kaijin wondered.

Omari, a fellow arcanist his age, had completed a
quest of his own and was on his way back to the Citadel, which was located just
north of Ghaeldorund. Kaijin, grateful that Omari helped him reach his own
destination, had in return sent him home.

Zarya, a mysteriously beautiful priestess of
Celestra, hadn’t shared her own reasons for traveling, but Kaijin had sensed
her encouragement upon her departure.

Nester was a mischievous brownie with hands
stickier than sap. Kaijin smiled to himself. Perhaps it was a good thing he’d
sent Nester back with the others when he did, else he’d probably be
continuously shooing the brownie away from the Pyre’s coffers.

Aidan—a gentle, giant half-Dragon—was immensely
strong and had helped the group of them save a baby Dragon from a band of
slayers. Ironically, Aidan detested violence of any kind. Kaijin still wondered
about him ...

Kaijin closed his fist, extinguishing the flame
and letting the darkness cloak him in his windowless bedchamber. He wasn’t
certain if it was day or night.

He summoned the fire onto his palm again. That
time, it momentarily flared white before settling into a calming, deep-orange
hue. The brief, bright flash revealed more of the ceiling, including his
familiar, Miele—a fruit bat—who clung to an offset stone, protruding from the
wall far above Kaijin. Her wings were folded about her body, and she appeared
to be resting. The light shone on her, and she stirred.

Kaijin ran his other hand over the top of the
flame and smiled at its movements. Fire didn’t hurt him like it had when he was
a boy. His infatuation with the element, coupled with the power that possessed
him, made him immune to the pain of being burned.

“Why do you like fire so much, Kaijin?” he
recalled his younger brother asking once.

Kaijin could never explain why—not then, not now.
It was something he couldn’t describe with words, only feel. Watching fire burn
brought him a sense of happiness, contentment, and pleasure. He let his mind
drift and merge into the ever-changing flames, and his tired body relaxed.
Strange tingling traveled through his body, a sensation that he’d sometimes
felt as a boy, though he hadn’t understood what it meant at the time.

A knock at the door disturbed his reverie. Startled,
he closed his fist and squeezed his eyes shut, forcing them to adjust to the
darkness of the room once again.

Miele let out a sharp screech, and Kaijin heard
wing beats as she dove from her perch. She landed on the bed, next to his hand,
her furry body tickling him.

Another knock came, followed by a male voice. “I
know you’re in there, Kaijin Sora. Open this door. We’ve much work to do.”

Kaijin perked up, recognizing the voice of Vargas,
the generous and helpful priest who had initially shown him around the Pyre
when Kaijin and his friends arrived. Vargas had also introduced him to Ranaiah,
the Pyre’s high priestess. He smiled. She drew him in ways no woman had ever
done.

I hope I will see her again today,
he
thought, feeling his cheeks get warm.

With a lazy groan, Kaijin slid out of bed, rubbed
his hands through his fire-red hair, and trudged to the door. He opened it a
crack and peered out, squinting into the light of the hall.

Vargas smiled pleasantly at him. “May I come in?”

Kaijin opened the door all the way and let him in.
As the priest stepped inside, Kaijin snapped his fingers, causing a small flame
to appear and shift from his thumb to his index finger. He lit candles around
his room, shedding ample light upon the old priest and his bright
red-and-yellow robes.

Vargas shut the door behind him and began slowly
pacing about the room, apparently deep in thought. He stroked his short, white
beard as he glanced about the bare, stone walls.

Kaijin sat down on the edge of his bed, watching
him curiously. Miele had flown back to the ceiling, away from the light. She
hung above Kaijin and observed them both intently.

“Sleep well, Kaijin?” Vargas asked, not looking at
him.

Kaijin raised an eyebrow. “Uh, yes, very much,
sir. Thank you. Though I must ask, will I be getting a room with a window
anytime soon? I miss waking up with the sun.”

“As part of your training, I must ensure that your
senses are hindered in order for you to work harder,” Vargas replied coldly.
“Perhaps later, when you’ve passed your tests and advanced in your training, I
will move you to a room with a window.”

Kaijin frowned. He hated not knowing the time of
day. His body would become completely disoriented because of it, which irked
him. How did Vargas expect him to properly perform his spells while his mind
was hindered? As it was, Kaijin sometimes had trouble casting in a controlled
environment, especially during times in which he heard the voices in his head,
voices that coerced him to do things. “So you will be the master who
administers my tests, I take it?”

Vargas finally faced him. The pleasant demeanor
the old man had worn when Kaijin first met him had disappeared, replaced with a
hard, stern expression. “Indeed. The high priestess has put me in charge of
your physical training. As overseer of the Vein, it is my duty to find and draw
out that inner strength in you as a Firebrand. We will train day and night
until you’ve satisfied me and High Priestess Ranaiah, who will be monitoring
your progress.”

The mention of Ranaiah brought a brief smile to
Kaijin’s lips.
So she is going to help me, as well.
He fantasized about
her watching him perform, with her beautiful brown eyes. He would complete his
test successfully, and she would give him that perfect smile ...

Vargas’s question snapped Kaijin out of his
thoughts. “‘Like’? I
love
it here, sir! I feel so much at home, and I
never want to leave.”

Vargas smirked. “Good, because you will not.”

A strange look in Vargas’s eyes made Kaijin’s stomach
twist. He decided to change the subject. “Tell me, sir. What is the Vein?”

Vargas put his hands behind his back and continued
his slow pacing. He stopped in front of the trunk at the foot of Kaijin’s bed.
“The Vein is one of two sects of the clergy. They represent Ignis’s strength
and are directly under the high priestess. The other sect is the Embers. They
represent Ignis’s dominance. They travel the world, demonstrating the
Firelord’s will to others, strengthening His clergy with more followers.”

Kaijin nodded. “I see. And what does High
Priestess Ranaiah represent?”

Vargas’s attention snapped to Kaijin, and he
glowered. “She represents Ignis’s judgment. As she is kind and
compassionate—perhaps
too
much so at times—she is also a purveyor of
peace, another of Ignis’s many facets.” He approached Kaijin, and the tone of
his voice darkened. “Let us get one thing straight,
boy
. You are in
my
care, and you will do as
I
say, else I will make you wish you hadn’t come
here. Is that understood?”

Kaijin cringed. Only his master ever called him
‘boy,’ which still annoyed Kaijin, but he was wise enough to not challenge him.
But Vargas, his words seemed like empty threats, and Kaijin’s pride overcame
his reason. “First of all, I am
not
a boy. And second, I understand and
accept the rules, but I will not be mistreated!”

In a rage, Vargas extended his hand toward Kaijin,
and it glowed white. An invisible force suddenly held Kaijin in place.

Kaijin couldn’t move his body. He grunted, and
felt the invisible force constrict his body. “S-Stop it!” he pleaded weakly. He
managed to look at Vargas, who smirked back at him sadistically. Then the glow
in Vargas’s hand dissipated, and the force around Kaijin disappeared. Kaijin
sank to his knees and hugged his body.

“Do you need another example?” Vargas asked, looking
down at Kaijin haughtily.

Kaijin glared.
This can’t possibly be the same
Vargas from yesterday.
“No, I get it.”

“Good.” Miele screeched, and Vargas glanced up toward
the ceiling. He huffed. “And see that your little ...
pet
also behaves,
else I will see that it’s locked in a cage, where it belongs.”

Kaijin slowly rose to his feet. “Miele is my
familiar. She does not need a cage. I assure you that she will not cause problems.”

Vargas spun around and headed for the door. “Very
well. Now get ready. There is much to do, and I don’t want to waste any more
time. Meet me in the main hall in five minutes and not a minute more, or else.”
He slammed the door behind him.

Kaijin jumped at the noise, and then sat very
still for a moment as he stared blankly at the door. The man’s changed demeanor
troubled him.

Kaijin then looked up at Miele. “What’s got
his
robes all twisted in a knot? I’m a little confused. I mean, I thought he liked me.
Well, he is just one man. There’s so much more to this place that outweighs one
little unpleasant experience.”
I’m in the Firelord’s sanctuary with
like-minded people who accept me for who I am, and I’m in the presence of the
most beautiful and intriguing woman I’ve ever met.

Kaijin stood, fixed his clothes, and put on his
other shoe. “Well, here we go ...” He hurried out the door with his familiar
and didn’t look back.

Last Exit to Brooklyn - Hubert Selby Jr by Hubert Selby Jr
A Song of Sixpence by A. J. Cronin
The Sunshine And Biscotti Club by Jenny Oliver
How to Become Smarter by Charles Spender
Letters From the Trenches: A Soldier of the Great War by Bill Lamin
In the Arms of a King (My Warrior Lover) by Divine, Daniella
The Bar Code Tattoo by Suzanne Weyn
Ripley Under Ground by Patricia Highsmith
The Secret of Crickley Hall by James Herbert
The Voices by F. R. Tallis
Our partner