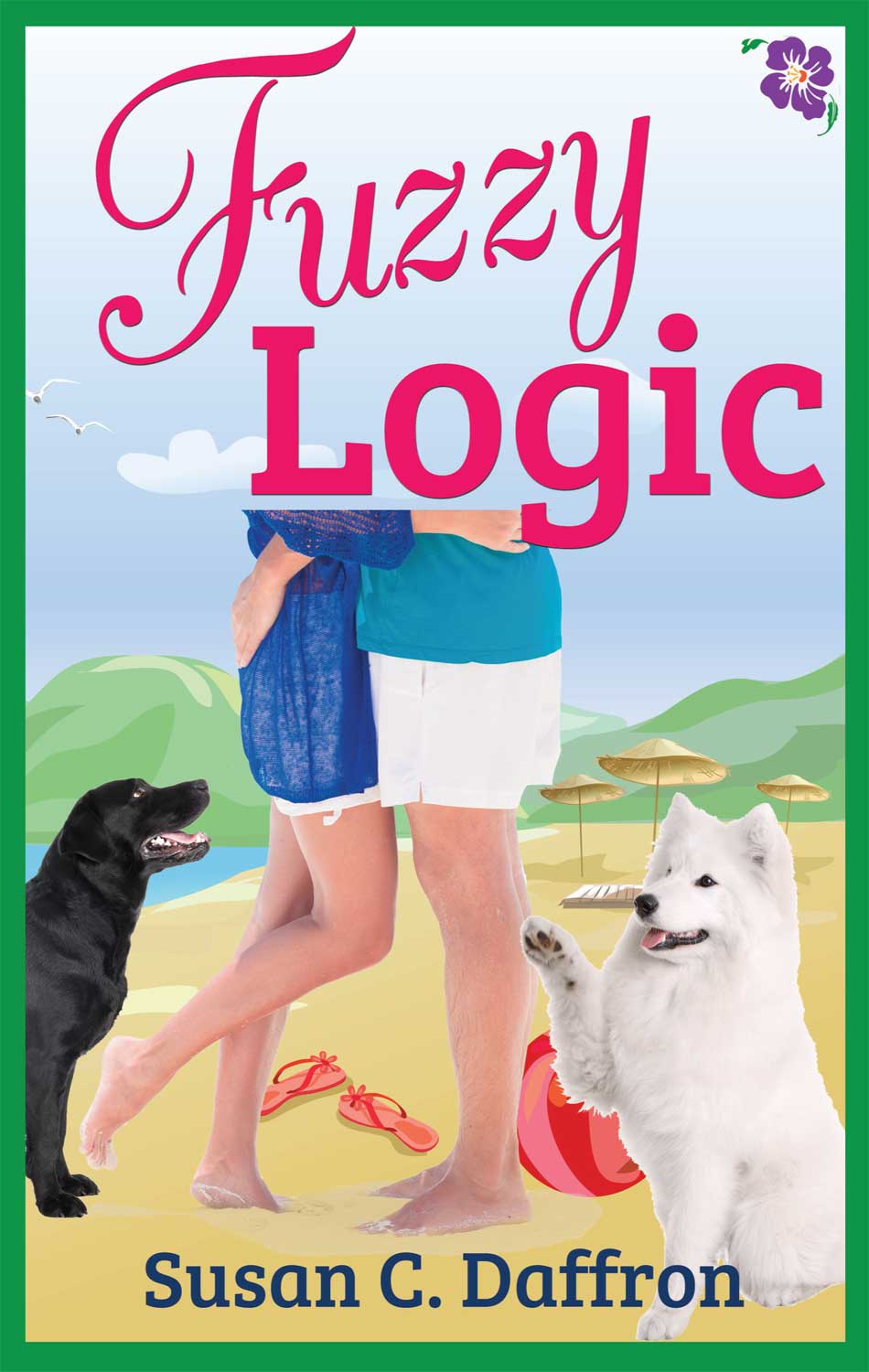 This is a work of fiction. All names, characters, places, and events are either the product of the author’s imagination or are used fictitiously. Any resemblance to actual persons, living or dead, business organizations, events, or locales is purely coincidental.

No part of this book may be reproduced, transmitted, or distributed in any printed or electronic form without the prior written permission of both the copyright owner and the publisher.

Librarian Jan Carpenter likes things just so. Nestled in her tidy little cottage on the outskirts of the small hamlet of Alpine Grove, she enjoys her quiet life with her friendly, rotund black lab, Rosa.

Jan’s orderly life is turned upside down when she attends her mother’s latest wedding in San Diego. (Number six...or maybe seven, but who’s counting?) There, Jan encounters Michael Lawson, the obnoxious neighbor kid from twenty years ago. He’s still irritating, but not as annoying as his dog who has a habit of eating...everything. The last thing Jan wants to do is risk heartache on a vacation fling with a smooth-talking serial dater, even if he is sinfully gorgeous and finds her unusual ability to remember obscure facts fascinating.

Amidst wardrobe destruction, canine digestive indiscretions, and episodes of extreme mortification, Jan’s desire to avoid drama may put the brakes on her fiery attraction to Michael. But maybe being cautious and responsible isn’t all it’s cracked up to be.

Fuzzy Logic
is a romantic comedy novel of approximately 80,000 words.

J
an Carpenter slowly drove her car along the pothole-laden gravel driveway, the rocks crunching under her tires. In the back seat, her black Labrador retriever Rosa ran back and forth from window to window. The dog stopped panting and looked surprised for a moment.

Jan looked over her shoulder at the dog. “Please Rosa, keep it inside. Please.”

Rosa raised her eyebrows momentarily and then bent her head to throw up on the old, ugly bedspread Jan had placed across the back seat of the car.

Jan sighed and gazed at the dog’s relieved expression in the rearview mirror. “You couldn’t wait for two more minutes? We’re almost there.”

Rosa wagged enthusiastically and resumed her frantic back-and-forth routine, a small river of drool swaying from her lower jaw.

The trees opened up into a clearing with a log house surrounded by forest. Half of the metal roof was covered with a silvery gray tarp and a man was sitting on the peak of the steeply pitched structure having something to drink. Jan shuddered at the idea of the man rolling down the incline and landing with a splat on the ground in front of her. Because of how the house was set into the hillside, it was a long way down.

As Jan navigated the car toward the house, she took in the rustic, slightly run-down setting.
What was Cindy talking about? This place doesn’t look like a boarding kennel
. Jan had enough to think about right now without worrying about Rosa, too. She parked the car under a tree off to the side of the driveway in front of the house and bent down to gather up Rosa’s leash and other things from the floor of the passenger side of the car.

When she looked up, a petite woman with long, dark hair opened the door of the house and started down the steps. As she got out of the car, Jan grabbed the leash and raised her other hand to wave at the woman. “I’m not sure I’m in the right place. Is this a dog boarding kennel?”

“Not exactly. But we’re working on it. I’m Kat Stevens. Cindy said you might be coming by with a dog who needs a place to stay.”

The muscles in Jan’s shoulders relaxed. She
was
in the right place. “That’s a relief. I have to leave town and there’s no one to take care of Rosa.”

“We have an outbuilding with a kennel in it. I have five dogs here and I have to walk them every day, so Rosa will have lots of friends to play with.” Kat peered over at the dog leaping around in the back of the car. “She does get along with other dogs, right?”

“Rosa may not be the smartest dog in the world, but she is the happiest dog you’ll ever meet. She loves everybody.”

“That’s good to hear. Did you bring her vaccination records from the vet?”

“Yes, I’ve got them, all Rosa’s favorite toys, and her leash.” She waved the leash in the air. “Everything.” Jan suddenly choked up at the idea of leaving Rosa. Why was she getting all weepy about vet records? She clutched the leash more tightly in her two hands. “I’m going to miss my girl. Thank you so much.”

Kat nodded. “We’re planning on building an official kennel in the spring, but Rosa should be fine. My dog Tessa stayed out there for a while, before it was fixed up.”

“Let me get Rosa out of the car. She gets carsick, so she might...well...not smell good.”

Kat smiled slightly. “I have experience with bad smells.”

Jan turned back to her car to collect Rosa. A tall, lanky man was strolling up from behind the house, his long legs traversing the ground quickly. He was surrounded by a parade of three dogs cavorting around him. One dog was brown, incredibly hairy, and gigantic. The animal had to weigh 200 pounds. A small nervous tremor rose in Jan’s stomach. At least the enormous dog looked friendly. As the group got closer, she recognized that the human was Joel Ross, Cindy’s brother. Still holding the leash, she waved. “Hi Joel. Was that you up on the roof?”

Putting his arm around Kat’s shoulders, he said. “Hi Jan. Yes, that was me. How are you doing?”

“I’m glad you didn’t fall off. And well, I’d rather be at work than traveling like this. Cindy probably told you what’s going on, right?”

Kat turned her head and looked up at Joel. “Really?”

Joel squeezed Kat’s shoulders slightly, but didn’t say anything. He had to be almost a foot taller than Kat. Standing next to Joel, she seemed tiny.

Jan turned back to collect Rosa. She didn’t want to talk about it all again and hoped they wouldn’t ask a bunch of questions. Over time, Jan had learned from Cindy that Joel was somewhat reserved. His habit of “clamming up,” as Cindy called it, drove his sister crazy, but meant Jan might be spared from yet another uncomfortable conversation about her mother.

Jan turned and opened the car door. She clipped the leash onto the dog’s collar and said, “Time to get out of the car now, Rosa.” The dog exited the car with a mighty leap, which caused her to pull her pudgy canine body around in a circle. “Easy girl. It’s okay.”

Rosa wagged so hard the entire rear half of her body flapped back and forth. The dog had a barrel-shaped torso and a smallish pointy head, which gave her an unfortunate resemblance to an oversized, hairy armadillo. Rosa jumped and yanked on the leash, trying to get closer to the other dogs. Jan struggled to retain her grasp, but smiled at the dog’s exuberance. “Look, Rosa! You have lots of friends to play with while I’m gone.”

Kat pointed at the three dogs surrounding Rosa, who were sniffing and wagging companionably. “The big, brown hairy dog is Linus. The smaller, brown collie mix is Lady and the black-and-white border collie is Lori. They’re all very friendly.”

Jan surveyed the group of wagging dogs. “I can see that. I feel better that Rosa will be among friends. I’m not really sure how long I’ll be gone. I got an open-ended ticket, since sometimes events with my mother don’t go as planned. But it should only be a few days.”

Kat shrugged. “It’s okay. We’re not going anywhere. As you noticed, Joel is working on the roof, so we have to stay close to home.”

Joel nodded. “Plus, Kat is working on a magazine article and has a deadline.” He gave her a meaningful look. “Soon.”

Kat moved out of his embrace and poked him in the ribs with her index finger. “I know. I know. I’m working on it.”

Joel grinned at Kat and moved her hand away from his ticklish torso. “Every day I get more insight into the amazing procrastination abilities of writers.” He bent to give her a peck on the lips. “I should return to the roof.” He looked over at Jan. “It was nice seeing you again. Don’t worry; we’ll take good care of Rosa.”

Jan cautioned him not to fall off the roof, and she and Kat watched as he ambled toward the back of the house. Jan envied the rapport Joel seemed to have found with Kat, particularly given that his last girlfriend had almost burned down his house when they broke up. His sister Cindy loved telling (and retelling) that story to pretty much anyone who would listen.

Jan could relate. There had been way too much drama in her life. And moving to Alpine Grove hadn’t helped as much as she’d hoped, since everyone
still
seemed to know about it. Best not to dwell on that, though. Kat seemed to be mercifully clueless. Jan did a mental head shake and turned her attention back to Kat. “Is there anything else you need?”

Kat looked up and smiled. “No. I think we’re set.” She took Rosa’s leash from Jan. “We’ll go for a walk after you leave. I think Rosa will like the trail we have through the forest.” She reached down to stroke Rosa’s sleek black head. “You’ll have a good time, Rosa. Many new sniffies everywhere.” Rosa wagged and panted, apparently eager to get on with the fun.

“Let’s get your stuff and put it in the Tessa Hut.”

Kat strode with Rosa in tow toward the outbuilding and said over her shoulder, “Like I said, when I first came up here, my dog Tessa stayed out here. Ever since then, I think of it as the Tessa Hut.”

Jan hurried to catch up. “Where is Tessa now?”

“She’s in the house with Chelsey. They are buddies and like hanging out in the basement together. And Tessa is what you might call a high-energy dog, so she can be a little too excited about meeting new people.” She pointed back toward the house. “Because the house is set into the hill, it’s actually two stories. The log part is set on top of a daylight basement. The dogs hang out downstairs and spend a lot of quality time sleeping. Chelsey has a special spot under a table that she’s claimed for her own. It’s her favorite place to be.”

The Break-In by Tish Cohen
Winter by John Marsden
The Girl Behind the Door by John Brooks
The Field of Blood by Denise Mina
Black Dagger (Mad Jackals Brotherhood MC Book 1) by Evelyn Glass
The Reaping by Leighton, M.
No Shelter from Darkness by Evans, Mark D.
Melt With You: Fated, Book 4 by Karen Erickson
The Claw Of The Conciliator by Wolfe, Gene
The Face Thief by Eli Gottlieb
Our partner