Read Into the Danger Zone Online

Into the Danger Zone 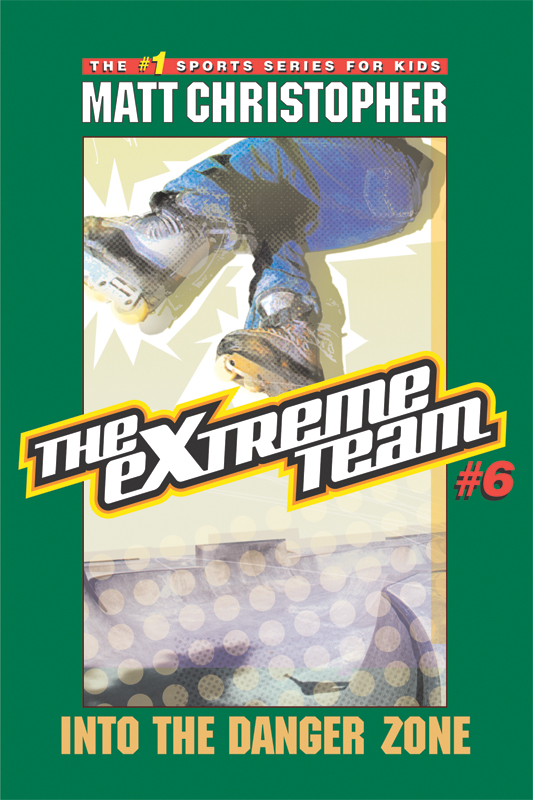 The Little, Brown and Company Publishing name and logo is a trademark of Hachette Book Group, Inc.

Matt Christopher
®
is a registered trademark of Catherine M. Christopher.

A SHORT HISTORY OF SKATEBOARDING

“Man, I can almost
taste
the warm weather, can’t you?”

Charlie Abbott spun around on his skateboard and grinned at Jonas Malloy. “I hear you, dude. I like snowboarding and all, but it’s been a long winter. I’m craving some action on the half-pipe and rails!” He pushed off and started moving down the sidewalk again. “How many more weeks until the skatepark reopens?”

Jonas groaned. “Alison said at least three. No exceptions.” Alison Lee was the teenager who ran the local skatepark and the snowboarding slope behind it. She set the rules for both and made sure everyone followed them.

“That means mid-April at the earliest,” Charlie said. He dodged around a dirty pile of old snow. “I’m not sure I’ll be able to wait that long!”

“No kidding. But what can you do? Rules are rules.” Charlie heard someone shout his name. He and Jonas both stopped as Xavier “X” McSweeney boarded up beside them. He was clutching a newspaper.

“You will not believe this!” he cried. He thrust the paper into Jonas’s hands and pointed to an advertisement.

Jonas’s jaw dropped. “No
way!
” he exclaimed. He handed the paper to Charlie and double high-fived X.

Charlie read the ad out loud. “‘Rocket Robert and the Shred Devils to appear one night only!’” He gave the paper back to Jonas. “Who’s Rocket Robert, and what’s a Shred Devil?”

Jonas and X stared at him in amazement. “Have you been living in a cave?” X said. “Rocket Robert is only the best skateboarder in the country! He and the Shred Devils — the other boarders and inline skaters in his group — are on a worldwide tour. They’re going to put on a show here!” He turned to Jonas. “Remember when we saw Rocket Robert two years ago?” 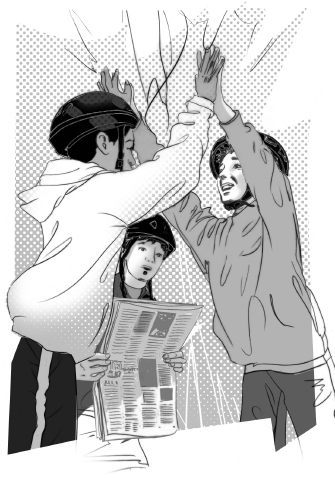 Jonas grinned. “You and me and Bizz were just getting good at boarding,” he said. Belicia “Bizz” Juarez was another friend who loved skateboarding. “We kept doing our moves in the stadium parking lot, hoping Rocket would see us and ask us to be in the show!”

X cracked up. “Yeah! And we had that one move we thought was killer, where we did that thing with our arms —”

“— and that other thing with our legs!” Jonas finished. He flailed his limbs, laughing so hard he almost lost his balance. “Mark and Savannah thought we were crazy!” he added, referring to their pals Mark Goldstein and Savannah Smith.

Charlie couldn’t help smiling with them, even though he had no idea what they were talking about. He had moved into town less than a year ago. He was still getting to know X and Jonas and the others, while they had known each other almost their entire lives. Sometimes he envied them their long friendships.

“So when is this Rocket Robert show, anyway?” he asked.

“Next Saturday,” X answered, “so we gotta get our tickets soon!”

“Next Saturday? I don’t know if I can go!” Jonas and X looked at Charlie questioningly. “My old friend Patrick is coming to visit next Friday after school. His mom just got remarried, and my parents are going to meet her new husband for the first time. They’re staying the whole weekend.”

X echoed Jonas. “Yeah, it won’t be as much fun if you’re not there!”

Charlie’s heart warmed. So what if he hadn’t known them all his life? He was still their good friend.

“So who is this guy Patrick, anyway?” X asked as they continued boarding down the sidewalk.

Charlie popped his board into the air, did a kick flip, and landed safely back on the board again. “I hung out with him a few years ago,” he replied. “He’s a good guy. Went through a pretty tough time when his parents got divorced.”

Jonas nodded as if he understood, and Charlie remembered that his parents, too, were divorced.

“Anyway, I haven’t seen him since we moved away a year and a half ago. We kept in touch through e-mails and were going to get together, but then my family moved again, to this town. I haven’t heard from him lately. Guess he’s been busy with his mom’s wedding and the new stepdad and all.”

“Is he into extreme?” Jonas wanted to know. “Way into it. In fact, he and his dad taught me a lot about boarding, like riding the rails and stuff.” He zigzagged onto the road, then jumped his board back up to the sidewalk. “That’s why I wish the skatepark was going to be open when he’s here. He’d love it. Think Alison would let us in, just for a day?”

“Doubt it,” came X’s immediate reply. “She told me the equipment has to be checked out first. She was worried the half-pipe might have been damaged over the winter or something.”

Charlie was disappointed, but he understood. Alison had to make sure the park was safe, after all. If she didn’t, and someone got hurt, she’d be in major trouble.

The boys boarded in silence for a while, popping wheelies and ollies and practicing their kick flips. They were so intent on what they were doing, they didn’t notice that dark clouds had rolled in and the temperature had dropped. Only when Jonas’s teeth started chattering did they realize it was about to snow. 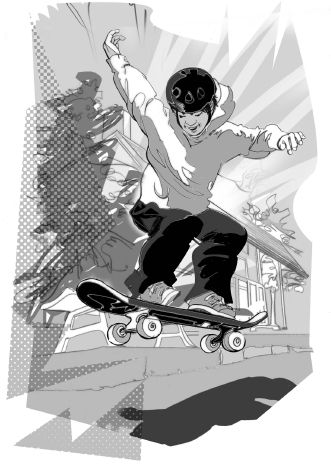 “C’mon, my house is right around the corner!” Jonas cried as the first flakes fell. Laughing, the three boys picked up their boards and ran as fast as they could to the Malloys’.

“Dad!” Jonas bellowed as he burst through the kitchen door. “Rocket Robert is coming to town! Can we get tickets? If we can, I promise I’ll shovel the driveway and the sidewalk and —”

Mr. Malloy emerged from his office. He worked at home, creating and designing video games. Charlie and his friends thought it was the coolest job ever.

“I’m one step ahead of you,” Mr. Malloy said. He dug a hand into his shirt pocket and pulled out an envelope. Inside were twelve tickets to the Rocket Robert show. He handed X and Charlie two tickets each. “One for you, and one for one of your parents,” he explained. “Your folks can fight over which parent gets to go. I’ll give the other tickets to Bizz, Mark, and Savannah later today.”

X and Jonas whooped. “Thanks, Dad!” Jonas cried. Mr. Malloy smiled. “You can still do the shoveling, though,” he said to Jonas as he disappeared back into his office.

Charlie stared at the tickets in his hand and sighed. “I sure hope I get to use these,” he said.

During dinner that night, Charlie’s mother turned to him and said, “Oh, by the way, Jonas’s father called earlier to make sure it was okay to buy us tickets for the Rocket Robert show. Sounds like fun to me.”

“Um, but Mom, what about Pat?” Charlie said. To his relief, she started laughing. “Well, for heaven’s sake, he can use my ticket! I’m sure Mr. Malloy or one of the other parents won’t mind looking out for you boys that night. Your father and I will have a nice visit with Pat’s folks instead.”

“Hold on a second.” Mr. Abbott was frowning. “You seem to be forgetting something, my dear.”

“That ticket was supposed to go to you
or
to me,” Mr. Abbott continued solemnly. “What makes you so sure
I
don’t want to use it to see Rocket Robert?”

It took Charlie a split second to realize that his father was joking. His mother threw a balled-up napkin at her husband and the three of them started laughing.

“Had you going there for a moment, didn’t I?” his father chortled.

Just then, the phone rang. Mrs. Abbott excused herself and answered it. She spoke to the caller for a few minutes, then hung up and returned to the table.

“That was Pat’s mother. She wanted to know if she should bring his skateboard, his snowboard, his inline skates, or all three. I told her just the snow-board since it’s snowing again. That okay, Charlie?”

He nodded. “If it sticks to the ground, the slope should be good for boarding.”

He hoped it would be. Otherwise, he wasn’t sure what he was going to do with Pat for two whole days. They had been good friends a couple of years earlier. But Charlie had moved twice since then, and they’d lost touch. He didn’t want to admit it, but he was a little nervous about seeing Pat again. What if they didn’t have anything in common anymore? He figured snowboarding together would help them get reacquainted.

Luckily, the snow didn’t melt. In fact, every day after school that week Charlie met his friends at the top of the slope. The conditions were mint.

“Ya-HOO!” Bizz shouted as she started her first run on Thursday afternoon. She crisscrossed the hill smoothly, leaving winding lines in the snow behind her. Leaning over the nose of his board to make himself go faster, Jonas followed her.

“I’m looking forward to meeting your friend,” Savannah said as she waited her turn. When Jonas was halfway down, she took off. Savannah moved more slowly and cautiously than either Jonas or Bizz. She was still learning to snowboard, and even though she’d improved a lot since the beginning of the winter, she wasn’t one hundred percent confident yet. Still, she enjoyed boarding and wasn’t afraid to try new things. Charlie admired her for that.

Then it was his turn. After adjusting his goggles and hat, he stepped into his bindings and snapped them on tight. Then he gave a little hop and started down the slope. The hill wasn’t that long but it was plenty steep. Charlie picked up speed, zigzagging in quick turns, making sure to keep an eye out for any other boarders or sledders. The last thing he wanted was a collision!

He made it to the end and stopped himself with a sharp twist that sent a spray of snow into the air. Then he unsnapped his bindings, picked up his board, and joined other kids making their way up the side of the hill. He caught up with Savannah. 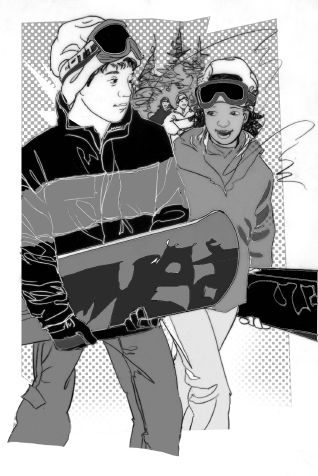 Samurai and Other Stories by William Meikle
Harvest Earth by J.D. Laird
Back in Black by Zoey Dean
A Stitch to Die For (An Anastasia Pollack Crafting Mystery Book 5) by Lois Winston
Destined for Doon by Carey Corp
Would You Kill the Fat Man by David Edmonds
Salsa Stories by Lulu Delacre
28 Days: a romantic suspense by Lexi Buchanan
Holy Island Trilogy 03 - The Final Countdown by Sheila Quigley
The Fireman's Secret by Jessica Keller
Our partner