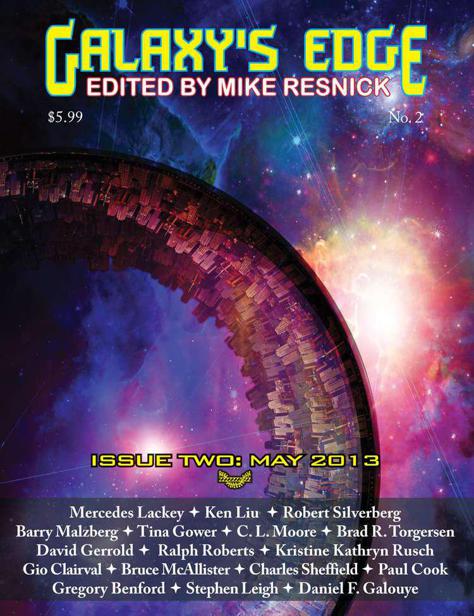 WHEN WE WENT TO SEE THE END OF THE WORLD

FROM THE HEART’S BASEMENT

TODAY I AM NOBODY

GHOST IN THE MACHINE

CHILD OF THE GODS

THE REAL FUTURE OF SPACE

This magazine (or any portion of it) may not be copied or reproduced, in whole or in part, by any means, electronic, mechanical or otherwise without written permission from the publisher except by a reviewer who may quote brief passages in a review.

Each issue of Galaxy’s Edge is issued as a stand-alone book with a separate ISBN and may be purchased at wholesale venues dedicated to books sales (e.g., Ingram) or directly from the publisher.

Advertising in the magazine is available.

THE EDITOR’S WORD by Mike Resnick

EFFECT AND CAUSE by Ken Liu

FROM THE HEART’S BASEMENT by Barry Malzberg

TODAY I AM NOBODY by Tina Gower

HAPPILY EVER AFTER by C. L. Moore

GHOST IN THE MACHINE by Ralph Roberts

CHILD OF THE GODS by Bruce McAllister

THE FEYNMAN SALTATION by Charles Sheffield

THE REAL FUTURE OF SPACE by Gregory Benford

Welcome to the second issue of
Galaxy’s Edge
. Like the first, and all future issues, this one is a mixture of new stories and reprints, reviews and columns. The reprints are stories you may have missed by very-well-known authors, and the new stories are by authors who we expect to join the ranks of the well-known somewhere up the road.

And while I’m on the subject of well-known authors…

We have quite a coup this issue. The magnificent C. L. Moore has been one of my two or three favorite authors for the past half century, and I assure you I’m not alone in this regard. She broke into print in her early twenties, and her very first story, “Shambleau,” which appeared in a 1933 issue of
Weird Tales,
is an acknowledged classic.

Well, “Shambleau” was her first
professional
story, but it turns out that her very first
published
story was “Happily Ever After,” which appeared in the November 1930 issue of
The Vagabond
,
a student magazine published by Indiana University. It’s quite short, but it shows that she had the right stuff even then. And with this issue,
Galaxy’s Edge
is thrilled to be able to present—for the first time in 83 years—C. L. Moore’s very first story. Thanks to Catherine for writing it, and to Andrew Liptak for unearthing it.

And why (I hear you ask) was she “C. L.” rather than “Catherine”? The general assumption is that she was hiding her gender in what was an almost all-male field. Logical, but wrong. She was hiding her
name
from her employer, a bank president who viewed the pulps with total loathing.

Yes, it is—and it’s just one of many.

So many people are so interested in the giants of our field—many, alas, no longer with us—that I thought I’d share some memories of them with you before they’re all forgotten by me and others.

The late Robert Sheckley was my good friend, and even my collaborator the year before his death.

Bob occasionally suffered from Writer’s Block, but he had an infallible way of beating it. He set himself an absolute minimum production of 5,000 words a day. If he couldn’t think of anything else, he told me, he’d write his name 2,500 times. And on those days he
was
blocked, he’d sit down and force himself to start typing. And to quote him: “By the time I’d typed ‘Robert Sheckley’ 800 or 900 times, a little subconscious editor would kick in and say ‘Fuck it, as long as you’re stuck here for another 3,300 words, you might as well write a story.’”

According to Bob, it never failed.

E. E. “Doc” Smith was the first pro I ever met at a con, back in 1963. Sweet man, very fond of fandom, very accessible to anyone. I always thought his greatest invention (other than the Lens and the Lensmen) was the seasonal Ploorians. Doc’s daughter, Verna Trestrail, became a good friend, and I used to see her every year at Midwestcon and Rivercon. She once remarked that she helped her dad from time to time. So I asked how, and she replied that, among other things, she had invented the Ploorians.

(Verna also created the planet where Clarissa had to function in the nude. She told me that Doc bought a gorgeous painting of it—and Mrs. Doc took one look at it and consigned it to the attic for the next 25 years.)

I met Robert A. Heinlein only a couple of times, at the 1976 and 1977 Worldcons, so I have no personal anecdotes to tell you about him—but Theodore Sturgeon had one. There was a point in the mid-1940s where Sturgeon was played out. He couldn’t come up with any saleable stories, his creditors were after him, and he was terminally depressed…and he mentioned it to Heinlein in a letter. A week later he got a letter from Heinlein with 26 story ideas and a $100 bill to tide him over until he started selling again. And, according to Sturgeon, before the decade was over he had written and sold all 26 stories.

I never met Fredric Brown. I know he grew up in Cincinnati, where I have lived the past 37 years, but no one here remembers meeting him. And I know he spent a lot of time working in Chicago, where I spent my first 33 years, and I never met anyone there who knew him either. But I do know he had a habit, especially when writing his mysteries (which far outnumbered his science fiction) of getting on a Greyhound bus and riding it for hundreds, sometimes thousands, of miles, until he had his plot worked out to the last detail. Then he’d come home, sit down, and quickly type the book he’d already written in his head while touring the countryside.

Phil Klass (who wrote as “William Tenn”) told this one on a panel I moderated at Noreascon IV, the 2004 Worldcon where he was the Guest of Honor.

He was dating a new girl, and he mentioned it to Ted Sturgeon when they were both living in New York. Sturgeon urged Phil to bring the girl to his apartment for dinner. He and his wife would lay out an impressive spread, and Ted would regale the girl with tales of how talented and important Phil was. Phil happily agreed.

What he didn’t know was that Ted and his then-wife were nudists. So Phil and the girl walk up to the door of Ted’s apartment, Phil knocks, the door opens, and there are Ted and his wife, totally naked. They greet them and start leading them to the dining room.

Phil’s girl turns to him and whispers: “You didn’t tell me we had to dress for dinner!”

At our first Worldcon, Discon I in 1963—I was 21, my still-beautiful child-bride Carol was 20—Randall Garrett invited a bunch of new writers and their spouses out for dinner—his treat. Then, during dessert, he excused himself to say something of vital importance to his agent, who was walking past the restaurant. He left the table—and we never saw him again. The rest of us got stuck with the tab (it was an expensive restaurant, we were broke kids, and Randy himself had the most expensive dish and wine on the menu).

Move the clock ahead three years. Randy spots Carol and me at Tricon (the 1966 Worldcon in Cleveland) and offers to buy us dinner. We say sure. During dessert Carol excuses herself to go powder her nose, and I remember a phone call I have to make. We meet and walk out, leaving Randy with the tab he had promised to pay (but, according to Bob Bloch, Bob Tucker, and others I’d spoken to before going out with him, had no intention of paying).

Move the clock ahead one more year, and we’re at NYcon III, the 1967 Worldcon in New York. On opening night Randy spots me across the room, turns red in the face, and yells: “Resnick, I’m never eating dinner with you again!”

I got an ovation from every pro and fan he’d ever stuck with a dinner check.

And let me end with one about a living giant, just to be different—my friend, Nebula Grand Master, Worldcon Guest of Honor, and contributor to this issue, Robert Silverberg.

When Bob started submitting to
Astounding
, John Campbell turned down his first few stories, and Bob’s sometime collaborator Randy Garrett (they wrote as “Robert Randall”) suggested that Campbell disliked Jewish names, so Bob submitted one under the name of “Calvin M. Knox,” and Campbell bought it.

Over the years he sold to Campbell as both “Knox” and Silverberg. Some years later John Campbell asked him why he’d used the Knox name. Bob gave him an honest answer. Campbell’s reply: “Did you ever hear of Isaac Asimov?”

Then, as the conversation was drawing to a close and Bob was about to leave, Campbell asked him why of all the pseudonyms in the world he chose Calvin M. Knox. Bob replied that it was the most Protestant-sounding name he could think of.

Finally, as he’s going out the door, Campbell asks him what the “M” stands for.

How can you not love this field?