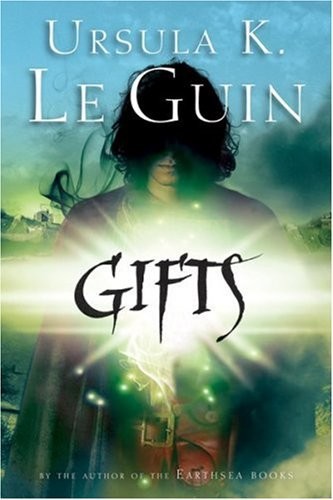 All rights reserved. No part of this publication may be reproduced or
transmitted in any form or by any means, electronic or mechanical,
including photocopy, recording, or any information storage and
retrieval system, without permission in writing from the publisher.

Requests for permission to make copies of any part of
the work should be mailed to the following address:
Permissions Department, Harcourt, Inc.,
6277 Sea Harbor Drive, Orlando, Florida 32887-6777.

H
e was lost when he came to us, and I fear the silver spoons he stole from us didn’t save him when he ran away and went up into the high domains. Yet in the end the lost man, the runaway man was our guide.

Gry called him the runaway man. When he first came, she was sure he’d done some terrible thing, a murder or a betrayal, and was escaping vengeance. What else would bring a Lowlander here, among us?

“He said people down there warned him not to come up among the witches.”

“But he knows nothing about the gifts,” I said. “It’s all just talk, to him. Legends, lies…”

We were both right, no doubt. Certainly Emmon was running away, if only from a well-earned reputation for thievery, or from boredom; he was as restless, as fearless and inquisitive and inconsequential as a hound puppy, trotting wherever his nose led him. Recalling the accent and turns of speech he had, I know now that he came from far in the south, farther than Algalanda, where tales of the Uplands were just that—tales: old rumors of the distant northland, where wicked witch-folk lived in icy mountains and did impossible things.

If he’d believed what they told him down in Danner, he’d never have come up to Caspromant. If he’d believed us, he never would have gone on higher in the mountains. He loved to hear stories, so he listened to ours, but he didn’t believe them. He was a city man, he’d had some education, he’d travelled the length of the Lowlands. He knew the world. Who were we, me and Gry? What did we know, a blind boy and a grim girl, sixteen years old, stuck in the superstition and squalor of the desolate hill farms that we so grandly called our domains? He led us on, in his lazy kindness, to talk about the great powers we had, but while we talked he was seeing the bare, hard way we lived, the cruel poverty, the cripples and backward people of the farms, seeing our ignorance of everything outside these dark hills, and saying to himself, Oh yes, what great powers they have, poor brats!

Gry and I feared that when he left us he went to Geremant. It is hard to think he may still be there, alive but a slave, with legs twisted like corkscrews, or his face made monstrous for Erroy’s amusement, or his eyes truly blinded, as mine were not. For Erroy wouldn’t have suffered his careless airs, his insolence, for an hour.

I took some pains to keep him away from my father when his tongue was flapping, but only because Canoc’s patience was short and his mood dark, not because I feared he’d ever use his gift without good cause. In any case he paid little heed to Emmon or anyone else. Since my mother’s death his mind was all given to grief and rage and rancor. He huddled over his pain, his longing for vengeance. Gry, who knew all the nests and eyries for miles around, once saw a carrion eagle brooding his pair of silvery, grotesque eaglets in a nest up on the Sheer, after a shepherd killed the mother bird who hunted for them both. So my father brooded and starved.

To Gry and me, Emmon was a treasure, a bright creature come into our gloom. He fed our hunger. For we were starving too.

He would never tell us enough about the Lowlands. He’d give an answer of some kind to every question I asked, but often a joking answer, evasive or merely vague. There was probably a good deal about his past life that he didn’t want us to know, and anyhow he wasn’t a keen observer and clear reporter, as Gry was when she was my eyes. She could describe exactly how the new bull calf looked, his bluish coat and knobby legs and little furry hornbuds, so that I could all but see him. But if I asked Emmon to tell about the city of Derris Water, all he said was that it wasn’t much of a city and the market was dull. Yet I knew, because my mother had told me, that Derris Water had tall red houses and deep streets, that steps of slate led up from the docks and moorages where the river traffic came and went, that there was a market of birds, and a market of fish, and a market of spices and incense and honey, a market for old clothes and a market for new ones, and the great pottery fairs to which people came from all up and down the Trond River, even from the far shores of the ocean.

Maybe Emmon had had bad luck with his thieving in Derris Water.

Whatever the reason, he preferred to ask us the questions and sit back at ease to listen to us—to me, mostly. I was always a talker, if there was anybody to listen. Gry had a long habit of silence and watchfulness, but Emmon could draw her out.

I doubt he knew how lucky he’d been in finding us two, but he appreciated our making him welcome and keeping him comfortable through a bitter, rainy winter. He was sorry for us. He was bored, no doubt. He was inquisitive.

“So what is it this fellow up at Geremant does that’s so fearsome?” he’d ask, his tone just skeptical enough that I’d try as hard as I could to convince him of the truth of what I said. But these were matters that were not much talked about, even among people with the gift. It seemed unnatural to speak of them aloud.

“The gift of that lineage is called the twisting,” I said at last.

“No.” The words were hard to find, and hard to say. “Twisting people.”

“Making them turn around?”

“No. Their arms, legs. Necks. Bodies.” I twisted my own body a bit with discomfort at the subject. Finally I said, “You saw old Gonnen, that woodsman, up over Knob Hill. We passed him yesterday on the cart road. Gry told you who he was.”

“A punishment. The brantor said he came on him picking up wood in Gere Forest.”

After a little, Emmon said, “Rheumatism will do that to a man.”

“Gonnen was a young man then.”

“So you don’t yourself recall it happening.”

“No,” I said, vexed by his airy incredulity. “But he does. And my father does. Gonnen told him. Gonnen said he wasn’t in Geremant at all, but only near the borderline, in our woods. Brantor Erroy saw him and shouted, and Gonnen was scared, and started to run away with the load of wood on his back. He fell. When he tried to stand, his back was bent over and hunched, the way it is now. If he tries to stand up, his wife said, he screams with the pain.”

“And how did the brantor do this to him?”

Emmon had learned the word from us; he said he’d never heard it in the Lowlands. A brantor is the master or mistress of a domain, which is to say the chief and most gifted of a lineage. My father was Brantor of Caspromant. Gry’s mother was Brantor of the Barres of Roddmant and her father Brantor of the Rodds of that domain. We two were their heirs, their nestling eaglets.

I hesitated to answer Emmon’s question. His tone had not been mocking, but I didn’t know if I should say anything at all about the powers of the gift.

Gry answered him. “He’d have looked at the man,” she said in her quiet voice. In my blindness her voice always brought to me a sense of light air moving in the leaves of a tree. “And pointed his left hand or finger at him, and maybe said his name. And then he’d have said word, or two, or more. And it was done.”

“What kind of words?”

Gry was silent; maybe she shrugged. “The Gere gift’s not mine,” she said at last. “We don’t know its ways.”

“Well, how does your gift act, what does it do, then?” Emmon asked her, not teasing, alive with curiosity. “It’s something to do with hunting?”

“Calling? What do you call?”

“Deer?” After each question came a little silence, long enough for a nod. I imagined Gry’s face, intent yet closed, as she nodded. “Hares?—Wild swine?—Bear?—Well, if you called a bear and it came to you, what would you do then?”

“The huntsmen would kill it.” She paused, and said, “I don’t call to the hunt.”

Her voice was not wind in leaves as she said it, but wind on stone.

Our friend certainly didn’t understand what she meant, but her tone may have chilled him a little. He didn’t go on with her, but turned to me. “And you, Orrec, your gift is—?”

“The same as my father’s,” I said. “The Caspro gift is called the undoing. And I will not tell you anything about it, Emmon. Forgive me.”

“It’s you must forgive my clumsiness, Orrec,” Emmon said after a little silence of surprise, and his voice was so warm, with the courtesy and softness of the Lowlands in it, like my mothers voice, that my eyes prickled with tears under the seal that shut them.

He or Gry built up our end of the fire. The warmth of it came round my legs again, very welcome. We were sitting in the big hearth of the Stone House of Caspromant, in the south corner, where seats are built deep into the stones of the chimneyside. It was a cold evening of late January. The wind up in the chimney hooted like great owls. The spinning women were gathered over at the other side of the hearth where the light was better. They talked a little or droned their long, soft, dull spinning songs, and we three in our corner went on talking.

“Well, what about the others, then?” Emmon asked, irrepressible. “You can tell about them, maybe? The other brantors, all over these mountains here, in their stone towers, eh, like this one? on their domains—What powers do they have? What are their gifts? What are they feared for?”

There was always that little challenge of half-disbelief, which I could not resist meeting. “The women of the lineage of Cordemant have the power of blinding,” I said, “or making deaf, or taking speech away.”