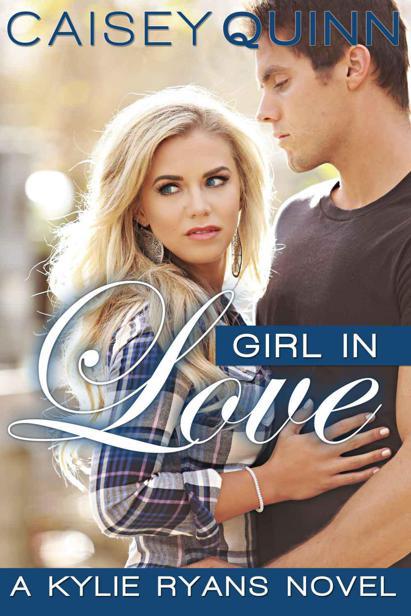 All I Ever Wanted

For Emily, who read
Girl with Guitar
and said, “You have to publish this,” and then held my hand every step of the way.

For the two men I’ve loved.

Daddy, thank you for showing me what real love looked like. And for my husband, who taught me the meaning of forever.

What’s the greatest chapter in your book? Are there pages where it hurts to look? What’s the one regret you can’t work through? You got it, baby. Mine would be you.

Mine Would Be You
– Blake Shelton

Kylie looked down at the glass of champagne she held instead of up into the eyes of the guests of her birthday party. The surprise one Mia and Lulu had thrown her. Biting her lip, she gathered the courage to glance up.

It had been nine months, nearly a year, since he’d walked out of her life. But she was still a shell of the person she used to be. She hid it well. Hell, she had two—well technically three—hit songs to show for it. But the people in this room knew better. And she knew they knew.

The two scheming hosts, plus Carmen and her fiancé, Lily, Steven, and the guys in his band all looked at her with similar expressions. Pity. God she hated that look.

“You’ve been working so hard lately. You deserved a night of fun.” Lulu nudged her shoulder. “You did have fun, didn’t you?”

“Yeah, I did. It was great.” She forced the biggest smile she could. Lulu’s eyes narrowed as she silently called
bullshit
.

“Hey, we should head out. Let you get some rest for your big day tomorrow.” Mia threw her a knowing look. Kylie thanked her with her eyes. Of all people, she never would’ve expected Mia to become the person to pull her out of her own personal hell. But she had.

Not that tomorrow was something she necessarily wanted to be reminded of.
The Other Side of Me
had gone platinum and the label was throwing a party. One she had no desire to go to. Not that she had a choice.

“I’ll walk you home, Mia,” Chris, Steven’s band’s lead singer, offered. Kylie’s eyes darted back and forth between Mia, Chris, and Steven. Steven’s face remained blank, but she saw the slight tension in his shoulders. Now there was a weird little love triangle she was kind of curious about. She grinned to herself as she considered nicknaming Mia
Yoko
.

“We should get going too. Our flight leaves early,” Carmen said, pulling Kylie into a side arm hug before walking to the door with her man. “You comin’, Lu?”

Kylie had told them all that they could stay in her new place. It was big enough, that was for sure. But they’d insisted on getting hotel rooms. She had a feeling it was because she wasn’t much fun to be around.

She spent nearly every waking minute either writing or in the studio. She knew her weirdo behavior made people uncomfortable, and she didn’t miss the looks they shot each other when she zoned out and missed an entire conversation. But she had no idea how to help it.

“Don’t be silly. You did all this work and you’ve had a long trip. I can handle it.” Kylie gave her friend a lingering hug and whispered, “Thank you,” in her ear. She hugged everyone else goodbye as they left. Well, everyone except Steven, who was still leaning on the bar in her kitchen. Part of her was glad he’d stayed behind. And part of her was nervous as to why.

She didn’t mind cleaning up by herself. In fact, she preferred being alone. No smiles to fake or forced conversations. But sometimes being alone was…lonely.

Once they were gone, she turned back to the tattoo-covered man in her kitchen.

“I’m staying to help clean up. Like it or not, Ryans.”

She laughed. “Okay,
Blythe
.” They worked in comfortable silence for a few minutes, clearing beer bottles and washing dishes.

“I’ll take this out to the dumpster.” Steven pulled the big black garbage bag from its can in her pantry.

She was bent over, putting the remaining bottles of alcohol into her fridge, when he retuned.

He cleared his throat and she jumped, nearly slamming her head into the top of the stainless-steel door. “God, you scared me.”

He gave her a wicked grin, provoking a twisting sensation all through her insides. “I like it when you call me God. Like it when you moan,
‘Oh God’,
even more.”

Her eyes went wide and she slapped him lightly on the chest as he came closer. “I thought we weren’t ever going to mention that again?”

They’d stayed up late finishing a song they were writing together and she’d had a few drinks too many. She’d felt bold and made a move. Kissed him. Kissing had led to more. Much more. They hadn’t actually sealed the deal, but what they’d done was still more than she thought she had probably been ready for. But since then, they’d both adhered to the strict no discussing drunken making out and inappropriate touching policy.

He responded with a cocky smirk that was as annoying as it was a turn-on. “Who’s mentioning it?”

Her chest heaved between them as he came closer into her personal space. “Y-you are. I think.”

“You want me to stop?” He leaned in, the force of his bright blue eyes pressing her back against the fridge as he let his hands rest on her hips. “Say the word and I will.”

But that was what made it so tempting. He didn’t love her either. It was just comfort.

Trace had walked away from her. Mia had rejected him. They’d found a way to ease the pain. Together.

But with him this close, she couldn’t think straight.

She closed her eyes and she still saw it. The source of her pain. Trace and Gretchen Gibson holding hands as they entered a rehab facility in Dallas. Hugging in a hotel doorway in Georgia. Arms wrapped around each other in a parking lot at a bar in Charlotte, where he’d supposedly come to see her. They’d been blurry photos online and in the tabloids, but the images in her mind were crystal clear. Even nine months later.

She licked her lips, knowing Steven could make them go away, even if it was just for a little while. “Same deal as before?”

She sucked in a lungful of air. He smelled so damn good. Sharp and sweet all at once. Cologne and beer. A hint of men’s soap and sugary icing from her birthday cake. “I want—”

She was interrupted by a harsh knock on her door. Well that was frustrating. She smiled at the irritated look on Steven’s face. “Wonder which one of them forgot something?”

“I’m kicking their ass, whoever it is.”

She snorted out a laugh as they both headed for the door. “It might be Lulu, and when she threatens to junk-punch you, she’s completely serious.”

Steven chuckled as they reached the door. “Thanks for the heads-up.”

It was kind of nice being with him. Easy. “Consider yourself warned,” she told him with a grin.

But when she opened the door with him close behind her, the smile dropped straight off her face.

Her world began to pitch hard left and then right as she completely lost her center of gravity. A bright bouquet of peachy pink roses, held by the last person on Earth she had expected to see at her door, greeted her.

Emotions she’d held back for so long slammed into her with the driving force of a runaway freight train. “W-what are you doing here?”

His hair was slightly longer. What had once been stubble was a full-grown beard. But it was him. If she’d thought his hazel eyes had been stormy before, they were currently a tsunami of colors swirling and threatening to drown her that very second.

“Just thought I’d drop by to wish you a happy birthday, Kylie Lou.” Pain leaked out into his words and was evident on his face.

“Corbin,” Steven said evenly from behind her.

Oh sweet Jesus.
She’d completely forgotten Steven was there, even though he was so close his chest was touching her back.

“Blythe,” Trace said just as evenly. He jerked his chin upward almost imperceptibly. His greeting was slightly deeper and laced with something she couldn’t name. Anger, maybe. Whatever it was, he’d managed to make Steven’s own name sound like a threat.

“Anyways, I just wanted to stop by and give you these. I’ll let you get back to…whatever you were doing.” A muscle in his jaw ticked, and even under the beard, she saw it.

It was taking all of her concentration to breathe normally and remain standing. Her hand shook visibly as she took the flowers he held.

“Thank you. I didn’t realize you were—”

“Out,” he finished for her, making it sound like he’d busted out of prison. “Yeah. I am. Have a good night.” His gaze lingered on her briefly before he turned on his heel and disappeared down the hall.

And just like before, he took what was left of her heart with him.

“P
LEASE SAY
you’ll come tonight, Kylie. It’ll be fun. And if anyone needs to have a little fun, it’s you.”

“Gee, thanks.” She would’ve rolled her eyes but Jean Claude was prying them open to apply another pound of mascara.