Read Give Me Hope Online 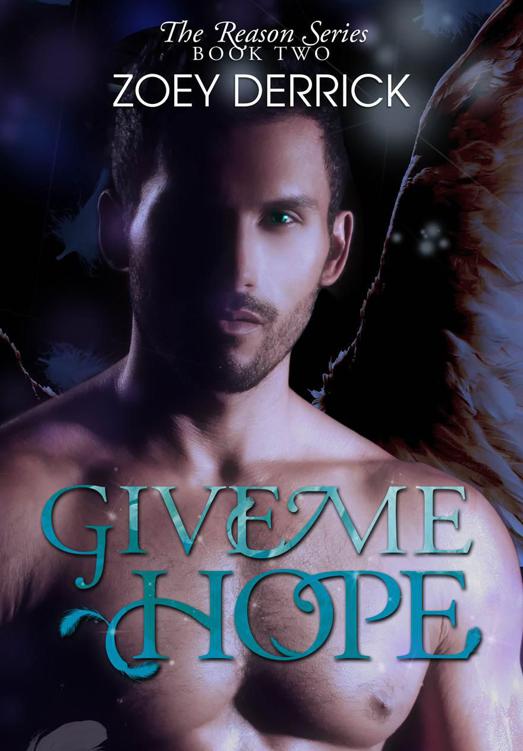 Cover Designer: Parajunkee.
Www.parajunkee.net
Thank you so much Rachel for all your amazing hard work for The Reason Series and all the lovely images that accompany your amazing covers.

Editing: The Editing of The Reason Series has been completed by Sione Aweschliman of Sione Aeschliman LLC. Thank you Sione for all your hard work.

All rights reserved. Without limiting rights under the copyright reserved above, no part of this publication may be reproduced, stored, introduced into a retrieval system, distributed or transmitted in any form or by any means, including without limitation photocopying, recording, or other electronic or mechanical methods, without the prior written permission of the publisher, except in the case of brief quotations embodied in critical reviews and certain other noncommercial uses permitted by copyright law. The scanning, uploading, and/or distribution of this document via the internet or via any other means without the permission of the publisher is illegal and is punishable by law. Please purchase only authorized editions and do not participate in or encourage electronic piracy of copyrightable materials.

For Vickie - without your driving support, I might not have finished this.

The entire Reason Series is dedicated to all the men and women around the world who are or have been a victim of Domestic Violence.

"Well, well, well...what do we have here. The little whore is all alone."

His hand is tight over my nose and mouth, blocking my air. I start to fight back, but he wraps an arm around my chest, squeezing hard.

He pushes me inside my apartment, slamming the door behind us.

I claw at his hand over my mouth but my grip is weak and my strength is failing the longer I go without oxygen. I scratch at his arm with my nails.

"Bitch, please. That shit don't hurt. But I have more than a few things that will. At least before I kill you." Panic washes over me as his determination registers.

The next thing I know, he releases me and his hand comes away from my mouth.

I gasp for air.

He pushes me hard.

I bounce off the bed, and then I’m falling toward the floor. I put my hands out, hoping to catch myself before I hit the ground. There is a loud popping sound, and blinding pain races through my body from my right wrist. I cry out and roll onto my side.

Blinking through the pain, I look up and see him looming over me. His dirty blond hair is mussed in short spikes. He’s wearing a white t-shirt and black jeans. His eyes are dark, drawn and detached. A look I’ve seen more times than I care to remember.

“And here I thought this was going to be hard, though I had to deal with your nosey neighbor first.”

He reaches for my leg. I pull it back and swing hard, narrowly missing his face as he flinches away. The momentum of my kick has sent me rolling back onto my stomach and onto my broken wrist. I scream as pain stabs across my body.

“Bitch!” he says as he reaches once again for my legs.

Before I can react and swing again, he comes down hard with his knee on the back of my leg. “You’re mine, bitch! You’re going to pay for what you’ve done to me.”

In a flash all of Riley’s narcissistic words come rushing back to me. It doesn’t occur to him that his own actions put him in jail; it’s that I put him there.

“I’ve done nothing to you.” As soon as the words leave my mouth, I brace myself for his retaliation.

Something comes down hard and heavy across the back of my skull. All I can see is brilliant white light.

Meanwhile… Across town in Mikah’s Apartment….

"Let them in," I tell Red. The familiar hum in my back dulls out, and I take it to mean that there’s no immediate danger. "I haven't a clue on earth why they're here, but let them in."

He turns for the door and opens it to reveal two men dressed in police uniforms. The man in front is about my height, stocky, and a little pudgy around the midsection. I estimate that he’s well into his forties, with graying, short, military-style hair. He has a very intense look about him, like he’s unsure of me, but he’s confident in getting what he’s after. The combination is strange, but he has a rather stoic, typically neutral expression.

There is another officer behind him and to his left who is much shorter but well-built and rather young.

Both men are very confident in their uniforms, and they both radiate authority. The intention is clear on their faces: They’re out for information. But what?

I nod. They stalk into the room like giants, their boots echoing off the tile and entryway walls.

"I'm Detective Stevens, and this is Officer Ruiz. We are with the Minneapolis Police Department. We'd like to ask you a few questions, if you don't mind."

"Of course I mind, but I'm not going to stop you from asking."

Stevens’s face remains impassive, and he is quick to continue with what he came here to do. "Would you please tell us what your car was doing on the corner of Lake and Chicago about thirty minutes ago?"

Vivienne’s apartment. A sharp warning stab zings across my back, and I’m not sure I should trust these men. “Excuse me?”

“Doesn’t seem like the type of neighborhood you’d usually be caught hanging out in,” Stevens says, gesturing to the marble floor and the leather couches before turning his attention to his notepad.

I bristle at the word caught. “That really doesn’t seem any of your business. Have I done something wrong? Broken any laws?”

Stevens looks up from his notepad. “We never said you did, we just want to know why you were there.”

Thinking about Vivienne’s apartment sends another sharp zing across my skin. Something is off. “I was... checking up on a friend.”

Stevens’s eyes widen slightly, and then a scowl forms. “Do you know Riley Bennett?” he asks sternly. Zing.

Riley Bennett. Why does that name ring bells? Something about that name... "No, I can't say that I do. Does he work for me?" I ask back.

"What about Rebecca Black?"

All the breath in my lungs rushes out of my body. I feel my knees shake violently and I try to steady myself. The hum surges like a shock of electricity across my entire body, pulsing with each frantic beat of my heart. "Vivienne? What about Vivienne?" Then it dawns on me like a bolt of lightning. "Riley! Riley is Vivienne's ex-boyfriend. The bastard that put her in the hospital."

The cops look at each other, and Stevens turns back to me. He shifts his feet as he does, taking a rather defensive stance. "You know about that?"

Officer Ruiz nods. "She's fine. Got home about half an hour ago.” I feel a harder jolt across my back. Something is
definitely
off. “We're watching her apartment. Which is how we ended up here. Your black Mercedes was seen parked across Lake Street from her apartment. Then you left the area once she got off the bus and to her door."

I let the sense of relief flood over me, and I take a deep breath. I hadn’t realized that my breathing was so slow and shallow. Emotions I don't understand wrack my body, mind and soul. I can't take it if I lose another--

I stop the thought short. I’ve had enough tragedy in my life. I can’t even begin to think about losing Vivienne too.

I nod. It is difficult to form words with my throat still so tight. "I met Vivienne about two weeks ago at the diner. I was in that area attending a reception. I was hungry, so I stopped in. I met her then.” No need to tell them that it wasn’t my stomach that led me to the diner.

"I’d seen what kind of condition she was in, and I wanted to try and find a way to help her. A few days later I tried to help her by taking her to H.C.M.C., where she was seen by a Dr. Alston."

"Go on,” Detective Stevens says, scribbling in his notebook.

I nod. "It turned out it wasn’t the first time Vivienne had been Dr. Alston’s patient. I eventually put two and two together. At some point that afternoon, I did or said something that upset Viv, and she threw me out of her room." That was probably one of the worst experiences of my life. I pushed her too hard, and she snapped. It is not an experience I want to have repeated anytime soon.

Detective Stevens smiles in a good-for-her way. "She seems the type."

I shake my head at the expression on his face and snort at his words. "You can say that again. Anyway, I made sure she was taken care of. Due to my being a major shareholder in the hospital, Dr. Alston agreed to keep in touch with me about her progress, and she was released the next morning. She wouldn't take money from me, but Dr. Alston was able to collect some cash from the hospital to help her out. I've stayed away from her since then. But I need to know she is safe, and I feel a sense of responsibility toward her to make sure it stays that way. Every night, I wait near her apartment until she gets home, and then I leave. Nothing more."

"Maybe, but she is a tiny little thing. She is about thirteen weeks pregnant, with no money, living in one of the roughest neighborhoods in Minneapolis. I worry about her safety.” I sigh. "Is there a point to all of this, Detective?"

There is no immediate reply, but the less stoic expression on Stevens’s face is telling me that he’s deciding something. Whether or not he trusts me? I’m not sure I care, but it is rather obvious in his defensiveness regarding Vivienne that he too cares about her in some strange way. I take some comfort in that fact, all the while realizing that Vivienne is very easy to care about.

"Riley Bennett was released on bail last week."
Zing.
"We have reason to believe that he is looking for her.” The sharp stab returns, and I know my face scrunches up. “We came here to find out whether there’s a connection between you and Riley Bennett.” He scowls slightly, scrutinizing my reaction. Reading me.

“I’ll admit, my actions are probably a little over the top when it comes to Vivienne, but I’m not doing anything illegal.” Technically. “And I’m certainly not in league with Riley.”

He nods, accepting that I’m telling him the truth, and continues, "I spoke with her earlier today, let her know the situation, and she was willing to cooperate with the police presence. Officer Ruiz, Officer Hoffman and myself made our presence known at the diner by having dinner there tonight."