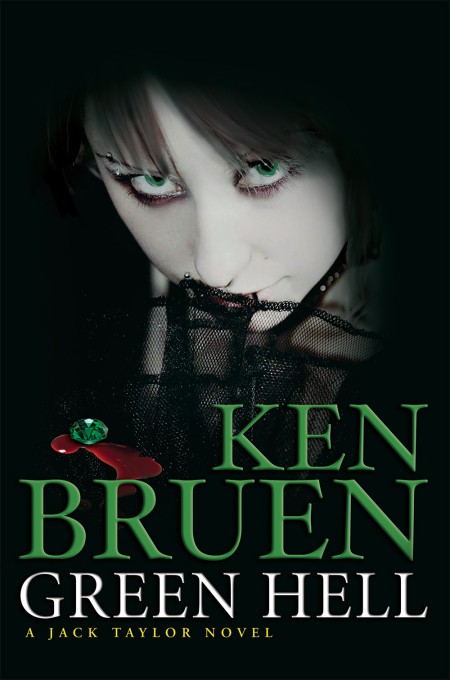 Including a Biography of Jack Taylor, by Boru Kennedy

All rights reserved. No part of this book may be reproduced in any form or by any electronic or mechanical means, including information storage and retrieval systems, without permission in writing from the publisher, except by a reviewer, who may quote brief passages in a review. Scanning, uploading, and electronic distribution of this book or the facilitation of such without the permission of the publisher is prohibited. Please purchase only authorized electronic editions, and do not participate in or encourage electronic piracy of copyrighted materials. Your support of the author's rights is appreciated. Any member of educational institutions wishing to photocopy part or all of the work for classroom use, or anthology, should send inquiries to Grove Atlantic, 154 West 14th Street, New York, NY 10011 or
[email protected]
.

an imprint of Grove Atlantic

Forgiveness
Might Be Feeding the
Hand that
Bites You

It was never a plan to write about Jack Taylor. I'd come to Dublin as part of a Rhodes scholarship to conclude a treatise on Beckett. To end up living in Galway, drinking as if I meant it,

As Jack would say,

A Boswell to Dr. Johnson

A Watson to Holmes gig.

But rather a haphazard series of events leading me to abandon Beckett in pursuit of the Taylor enigma. Little did I know it would be an ironic reflection of one of Jack's favorite novels:

As Jim Crumley had once said of a book,

“This is not a crime novel, it's a story with some crimes in it.”

I met Jack Taylor at a time of odd disturbance.

Had all recently died. Jack mourned all three. He had heard of only the first. The second was the star of
Glee
and the third had presented a show called

Jack said those last two represented (a) the youth he never had and (b) how old he was not to recall Whicker.

Both ends of his booze-soaked candle. James G of course was in
The Sopranos
, demonstrating, Jack said,

“How depression and brutality are uneven dance partners.”

This, like many things he said, made sense only to him.

I hadn't, he claimed,

To truly grasp absurdity. Accounts in part for my name. My mother is Irish and steeped in the iconography of a blood saturated in epic/tragic history and so, after

My father hails from Boston though, alas, is not of the infamous immediate family. Though they do say all Kennedys are related.

That dog doesn't hunt. I haven't come within a spit of the Hyannis Port compound. I will admit to a certain strain of impetuousness. Spring break in CancÃºn the year of my graduation, I came to from a tequila slammer ruin with a tattoo on my arm, reading

When I'd jokingly suggested to Taylor I write of his life, he'd gone deep.

“Shall I tell you the truth or just string you along?”

The heft of the man. Jack was, he claimed, exactly six feet tall, adding,

For such a ferocious derider of the Church, he was sodden with its

I'd told him I was an atheist and he laughed, loud and warm. He had one of those truly epic laughs. It was so rare but when he let go, it was all-embracing. His eyes and his wounded spirit on song.

“See how that flies when a fucker shoves a gun in your mouth at three-thirty in the morning.”

The books he was reading in those last days. As if he knew something.

Satan, your Kingdom must

Playing as I perused the book titles.

The Universe Versus Alex Woods

And of course, the boxed DVDs:

And I wondered how a perpetual drunk, pill-popping, on/off nicotine freak could focus long enough for any of the above. I asked.

July 2013: The Galway Races on the shimmering horizon. I'd known Jack for three months. In truth, with him,

I was on the ground, my top teeth crushed by a steel-toed Dr. Martens. Two thugs, trainees almost, no more than sixteen . . . collectively had waylaid me as I came out of McDonagh's Fish 'n' Chips. Bottom of Quay Street but a bad poem away from the Spanish Arch. I was balancing my smartphone and the food, authentically wrapped in the weekly
Galway Advertiser
, the first one asked,

The richness of Irish youth vocabulary. The second one, I'd carelessly allowed behind me.

I'm an academic, not a kung fu fighter.

He hit me hard in my lower back with a baseball bat. The shame, not to be even mugged with authenticity, like, say, with a hurly.

Oh, America, we export too well.

Shock and pain swamped me as the first took my top teeth out with his boot. Shame too, mortification, I was taken down by . . . fuck's sake . . .

Amid blood and dizziness, I gasped as both kids stood, ready to, as they chanted,

“Let's kick the fuckin be-Jaysus out of this bollix.”

A figure loomed behind, then I heard,

And he literally cracked their small, malicious skulls together. They reeled apart, moaning, and he dropped the first with a kick to the groin. He reached a hand to me, said,

With his help, I was able to stand, even spit out some teeth. I mumbled,

I asked, as I tried to fight off nausea and tremors,

He was staring at the second kid, who, though on his feet, was dazed. He answered,

“Long as you got the bucks, we love you.”

Then checking my ruined mouth, said,

Used his cell, called a cab, urging them,

Again a faux American intonation, as if he was subtly mocking me. Sure enough, a cab screeched to a halt in, as I'd come to know Jack's term,

Helped me to the cab, then turned, moved back to the seriously fucked kids, and, get this,
frisked them.

Jack slid into the seat beside me, holding the kid's money wedge, said,

He sees the little girl, Serena May, delighted with the new trick he showed her. How to make a silver coin disappear. He'd thought, ruefully,

A trick the banks had perfected to an inordinate degree.

The sun had been uncharacteristically hot. He'd opened the window on the first story and watched as the little girl gurgled happily on the floor.

Woken by a small cry.

Barely a whisper, more a tiny whisper of utter dread. Jumped to his feet.

The child was gone.

Thus began a whole fresh circle of hell. Later, when the full truth was revealed, he might have been partially absolved.

Least of all by himself.

I worry about anyone who is lighting himself on fire for our enjoyment.

The
New York Times
wrote in 2012 about Cat Marnell, a confessional columnist who described her vampire hours, soulless sex, fragile mental state, and drug-fueled lifestyle. Her job, she said, was to be:

Jack Taylor had been doing that job all his life.

I was released from the hospital on the first day of the Galway Races. The fierce three-week heat wave had come to a deluging stop. Torrential rain lashed the streets. Did it stop the racing?

A temporary bridge in my upper mouth would hold until, a cheerful doctor said,

“Some fancy dentist can charge you exorbitantly.”

Dentistry, I soon learned, like everything else in Ireland, was nightmarish expensive. To my utter amazement and perhaps a little delight, my savior was standing outside the hospital's main entrance. He was wearing chinos, Crocs, and faded T-shirt with the slogan

(Hunger is the best sauce).

He was deeply tanned and his full head of graying hair needed a trim. Deep lines gave his face the allure of old parchment but the eyes were alive and slightly mocking. Extending a hand, he said,

Holding my gaze, he said,

Not for the first time I behaved like a prig, protested,

He sighed, took my arm, said,

Led me across the road to a pub called the River Inn. He said,

“It's Ireland, there's not a river within spittin distance.”

I noticed he limped slightly but still moved with an economy that belied his years. He was right about the town. The place was jammed but he muscled his way to the bar amid shouts of

He ignored all, got a winning smile from the barwoman, who asked,

And somehow, despite the crush, carried out a table for us by a large window. He said,

“Plant yer arse on that.”

Did he mean the table? He straddled a stool, producing a second from the crowd. I sat, asked,

“How will she find us in this mob?”

I trailed. He muttered,

“I hope to fuck, hell of a time to discover she's a Mary.”

“Take her a few minutes to build those pints.”

“Yah lucky fuck, the pints will have you flyin in jig time.”

The woman appeared, unfazed by the madding crowd, plunked two perfect pints and two shots before us. Jack handed her a flash of notes, said,

“And one for yourself, hon.”

She gave him a smile of pure radiance. He raised the pint, said,

Downed half his pint, hammered the shot, said,

“Get that in yah, another round coming.”

My Taylor baptism if not of fire, then certainly Jameson.

Punctuate my fractured recollection of that first, long, insane day with Jack. We even backed a horse, named, I shit thee not:

Ridden by A. P. McCoy

And Jack saying to me,

“See kid, the shit-hot favorite is ridden by the people's favorite,

The bookies were truly like Dante's forgotten circle of a Celtic hell. Despite the ban on smoking, the air was suffused with smoke. Smoke of frenzied desperation.

Slight shadow of annoyance flitted across his battered face, then was gone, he enunciated slowly,

“Put a hundred euros to win.”

Despite the booze, the sheer adrenaline in the very air, caution whispered. I asked,

Took him a moment to translate American to Irish-English, then,

I bit down, withheld,

“And gee, look at the evidence.”

I played to win.

I never won a goddamn thing outside of literary stuff. I yelled,

Tried to give him half.

Which was chips doused in vinegar, sitting on the rocks over Galway Bay. A six-pack in a cooler and a twenty-euro dope deal.

Then belch as if you meant it. With Jack, I was learning he could turn on a red cent without conversation, rhyme, or reason. He was talking about Walter Macken, veered, asked,

I said, of my Dublin impressions,

“What's with the rabbits?”

I told him that

(a) I was stunned by the number of beggars and in one bizarre scene, outside the ultraexpensive Brown Thomas, a man on his knees, a cardboard sign pleading for food.

(b) All the homeless guys/beggars on nigh every bridge had, get this, a rabbit.

“Last year, on a slow news dayâmeaning Syria, the Banks, Household Charges were on holdâthe media ran with a story of a young homeless guy who kept a pet rabbit. Some mindless morons grabbed the animal, slung it into the Liffey.”

“The homeless guy dived in, saved his rabbit. . . . Lo and behold, he got all sorts of help, including the Mayor's Bravery Award.”

I mulled this over, then,

“Naw, we have a no-frills gig going. Just feck the homeless guy in the river.”

Impossible to tell if he was yankin my chain. I tried,