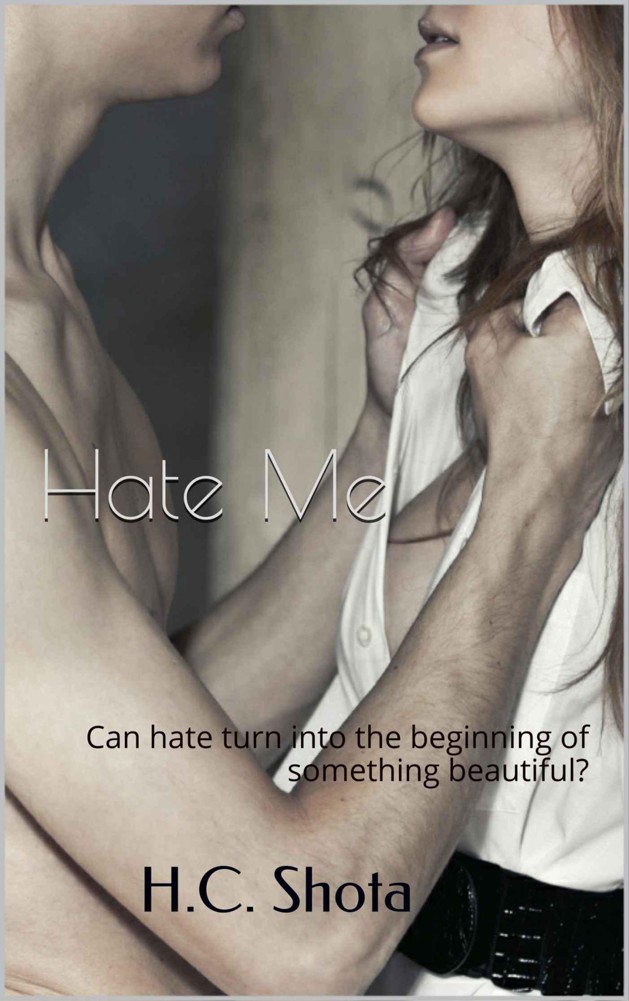 T
his is a work of fiction. Names, characters, businesses, places, events and incidents are either the products of the author’s imagination or used in a fictitious manner. Any resemblance to actual persons, living or dead, or actual events is purely coincidental.

****
Kindle Edition Licence notes
****
This ebook is licensed for your personal enjoyment only. This ebook may not be re-sold or given away to other people. If you would like to share this book with another person, please purchase an additional copy for each recipient. If you’re reading this book and did not purchase it, or it was not purchased for your use only, then please return to Amazon and purchase your own copy. Thank you for respecting the hard work of this author
.

Sneak Peek from See Me

My freshman year at Montgomery University wasn’t going to be easy. I wasn’t even in class before the whispers began. The back of my neck burned, but I kept walking in my high heels. I pretended I didn’t care what these people thought of me. I passed the hallways without having to confront anyone, but it was when I was waiting for my English Lit class to begin, that I knew trouble started heading my way, and she began with J. Jennifer and I used to be friends a long time ago, until her mother stopped associating with mine, and in return, Jennifer stopped associating with me. I understood the reasons for it, and I was Okay with her not talking to me anymore. What I didn’t understand, is why she kept making my life hell. We went to the same school and because of her, I’d had to drop out and continue with my studies at home. It had taken years for me to be normal around people. This time I wasn’t going to let her chase me out again. I wouldn’t stand by and be bullied or think I deserved it. Only one person in the world had the right to hate me.

‘What?’ I heard.
I barely resisted the urge to look back and see if they were pointing at me.

I
turned my head towards the three girls gossiping about me.

Jennifer gave me a false smile. ‘Hey Amanda, how’s your family? I heard your mother’s dating again. Don’t tell me she’s going to marry another weirdo.’

If I wanted to show them, they couldn’t hurt me, I had to hurt them first. I looked at Jennifer and smiled sweetly, ‘Hey, Jen,’ I said, ‘Retch up anything lately?’

J
ennifer paled at my comment.Nobody sniggered, or laughed. Her friends surrounded her in support. They shielded her from me, like she was some kind of victim. Yeah, it may have been a low blow on my part to out her as bulimic, but she started it first.

The English Lit P
rofessor arrived. He opened the lecture room with a key. I followed after Jennifer but I sat far away from her and her group of friends. She was already popular. As for me, I hadn’t even had a chance to make friends. By now, the whole campus would know about me. I sat near the far back. I listened to the English Professor as he introduced himself.

‘Sorry I’m late,’ said a voice I hadn’t heard in a long time.
The last time I had seen him had been five years ago.

Jack’s brilliant
blue eyes scanned the room and rested on me. I don’t know who was more shocked: me or him. I looked away in shame, but I had caught his hate filled eyes. Jack chose to take the seat behind me on the last row. I don’t know if he was doing it to torment me or if it was over-thinking on my part.

Professor Mitchell said, ‘I’d like you to introduce yourself to your partner.’

I faced Jack because I had no choice. I wished we hadn’t gone to the same school. I wished we had never met. It was too late for any of those things. I had ruined this boy’s life and his family. ‘I’m Amanda Lowell,’ I said weakly.

Jack’s voice was
cold as he said his name, ‘Jack.’

I knew his surname as well as my own, but I was pretending not to, because we were both playing this game of not knowing the other and acting like we were meeting for the first time.

‘I can’t do this,’ Jack said on a choked whisper. He turned away from me.

‘Don’t say my name. Don’t look at me and don’t
fucking
talk to me.’

I flinched at the harshness in his voice.
The people at the front row were already speaking to the rest of the class about the person sitting next them. I dreaded my moment and couldn't decide whether I just wanted it to be over and done with, or if I wanted to prolong my humiliation.

When it was my turn, I was e
mbarrassed I couldn’t say simple things like Jack’s favourite colour, or what music he listened to. All I could say was his name. ‘This is Jack Daniels as in the drink,’ I said lamely. A few chuckles arose at that. ‘And that’s all I know,’ I said.

Jennifer smirked as if
that was what she had expected. She whispered to her friends. Jennifer probably hadn’t finished telling them my entire life story and Jack and the involvement of his family. I saw her look back in Jack’s direction and knew my guess was correct.

The whole class was silent as they realised I had nothing else to say.
Jack didn’t even bother to try.

Thankfully
, Mr Mitchell didn’t press us and began to discuss the books we would need for this semester. I wrote down the list. I ignored Jack and pretended he wasn’t behind me; all the while I was very aware of him. I could feel every movement as he shifted on his chair or reached to get something from his bag.

I was glad when the seminar came to an end. It h
ad been tough for a first day. Jennifer and her cronies waited for at the end of hallway. I was the last one to get out of class. I braced myself.

‘How can you show your face
around here?’ Jennifer’s friend said, some blonde girl with fake tan. Montgomery was fast becoming the next
Essex.

‘How can you?’ I replied.
‘Better hope it doesn’t rain. Wouldn't want all that tan to wash out.’

I left her stuttering
and heard Jennifer mutter ‘What a
bitch
. She doesn’t even feel bad. Poor Jack.’

They had no idea how I
felt
. They didn’t know what it was like to be a thirteen year old and testify in a court room against my own flesh and blood and in front of people who detested me and everything to do with my family.

I walked across campus with my head held up high, because I would not cower in front of all these people.
I was no longer the girl who covered her face with her hair, or looked down at her shoes.

I went straight to
the dorms. My roommate was a tattooed girl with a several piercings, the most prominent being above her lip.She was a little bit of everything. Rene had Spanish, French, Italian, and German heritage. We had quickly become close after moving in together.

‘Is it true what they’re saying about you?’ she asked without missing a beat.

I liked that with Rene. She was honest and said what was on her mind.
‘Yep,’ I replied. ‘Now’s the time to change dorms,’ I half joked. My voice came out more serious than I intended.

Rene
surprised me by moving away from her laptop and sitting next to me on the sofa. She hugged me tightly. I hadn’t realised how much I needed that until then. I was starved for human contact. My mother only cared about herself and her engagement with some rich guy. I didn’t have any friends because of my past and despite the court forbidding it, my face had been splashed all over the paper. The journalist responsible had paid a hefty fine, but I would be paying for the sins of another
and
my own childhood sins all my life. I would always be known as
that
girl no matter where I went. I leaned into Rene.

‘
You have no idea,’ I said, sounding muffled against her shoulder.

Rene stroked my hair, something my own mother hadn’t done for
me in a long time. 'Want to watch a movie?' she asked.

Rene searched through her collection of DVD's, until we had a short list to get through. We settled on the couch together and shared a blanket big enough for the both of us.

Classes started at ten
the next morning. After a late night of watching sappy films with Rene, I was quite tired. I looked at myself in the mirror. There was nothing I could do about the dark circles under my eyes. I didn’t wear make-up. I had vowed
never to
for as long as I lived.

I pulled on any old top, not particularly caring how I looked. I found a pair of jeans and put the rest of my clothes in the wash.
Once, I’d had everything a girl could envy, but then my family was disgraced, and my mother who had never worked in her entire life, began the lucrative career of leeching off a long string of rich ‘friends’. Now she was claiming her current ‘friend’ was here to stay. I thought she was joking but I was obviously wrong as they were engaged. I looked through my phone and saw the dozen missed calls from my mother – the only person on my contact list apart from Rene. I deleted them all without hesitation and stuffed the phone in my back pocket.

Drama with Mr Sachsen was better than I expected. He wasn’t boring like some of the other professors, and he wa
s much friendlier. Mr Sachsen was quite young for a professor and though he was a bit camp, he was married to a Mrs Sachsen.

‘Right, we’re going to do silly warm up exercises,’ he said, ‘and then I want you to get
into groups of three.’

I wriggled my hands and my legs. The exercises got more ridiculous until most of
us were laughing. My eyes rested on Jack’s and the smile immediately dropped from my face.

I
joined a group with two skinny boys with glasses, only because I thought they wouldn’t give me a hard time. I was right. They were harmless, if a bit flirty.

‘What school did you go to?’ Scott asked me, the better looking of the two. His mate, Matt, unfortunately suffered from a severe acne disorder. I tried my best not to stare at his face, but then I realised in
trying not to notice it
, I was being rude. I decided to treat Matt as if he was Rene. If my best friend had horrible acne, I would have no problem in maintaining eye contact.

Matt
smiled at me and I smiled back before I answered Scott. ‘Just some local school,’ I said vaguely.

Neither of them pressured me
to state which school I had attended. Apparently Scott and Matt weren’t up to date with the gossip. Luckily for me, that meant I could put my guard down for once and just be myself.