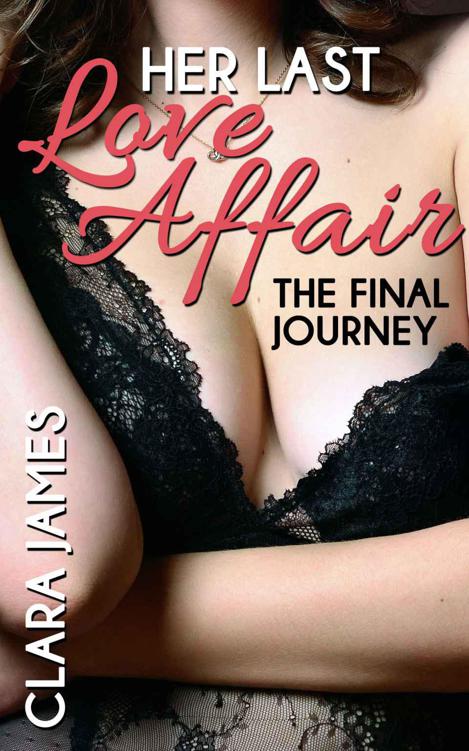 “Her Last Love Affair II: Breathing Without You”

This is a work of fiction. Names,
characters, places, and incidents either are the product of the author’s
imagination or are used fictitiously, and any resemblance to any persons,
living or dead, business establishments, events, or locales is entirely
coincidental.

This book is protected under the
copyright laws of the United States of America.
No part
of this work may be used, reproduced, or transmitted in any form or by any
means, electronic or mechanical, including photocopying, recording and faxing,
or by any information storage and retrieval system by anyone but the purchaser
for their own personal use.

This Book may not be reproduced in
any form without the express written permission of Clara James, except in the
case of a reviewer who wishes to quote brief passages for the sake of a review
written for inclusions in a magazine, newspaper, or journal—and these cases
require written approval from Clara James prior to publication. Any
reproduction or other unauthorized use of the material or artwork herein is
prohibited without the express written permission of the author.

A
llie Mclaren thought she had everything
she wanted: a successful career.  However, at just thirty-one, she learns that
she has a severe form of leukemia. Unwilling to put herself through what will
likely be fruitless, and certainly unpleasant, radiotherapy. She determines to
live the rest of her life with a much more cavalier attitude than she had up
until that point.

Seeking out old boyfriends
and other male acquaintances, she set about making up for lost time by engaging
in a string of purely physical flings. However, her quest for sexual freedom
hit a bump in the road when she hooked up with her first love, Reece. Unable to
simply engage in a one night stand with him, she finds herself having a
quasi-relationship, which she knows is becoming harder to break with each
passing day.

Eventually, Allie feels she
has no option but to tell him the truth about her condition. Shortly after she
does, she loses consciousness and awakes in a hospital bed. The news is bad:
her cancer is progressing faster than initially anticipated. She’s given just
months to live.

Allie doesn’t want to hurt
Reece, so feels she has to let him go. When he argues, she tells him about her
plan to make up for the sexual experiences she missed as a younger woman, and
that she wishes to continue with that while she still has the chance. Hurt,
Reece reluctantly accepts Allie’s decision and walks away.

However, he can’t stay away
for long and is soon making efforts to contact her. Allie, on the other hand,
is trying to block him from her thoughts, but her mind is constantly drifting
to him; even when she’s with other men. After a night with a fellow reporter
she met at a press conference, she arrives home to find a tipsy Reece at her
front door.

He tells her that he loves
her and wants to be with her, no matter what. She’s less sure and she’s
unwilling to put him through a couple of months of happiness only for him to
have to watch her slowly slip away. Reece, however, is determined not to let
the matter drop this time. Eventually, unable to resists her feelings, she
agrees that she wants to spend the time she has left with him and him alone.
However, they are both very aware that their happily ever after won’t last
long...

T
he sun dappled through the gap in the curtain and
Allie watched it dance across the carpet by the side of her bed. She was
transfixed by the movement of light and sighed deeply as she grasped the hand
that was held at her waist.

A low, semi-conscious moan vibrated through the chest that
was held against her back. “You okay?” he mumbled, his voice thick with sleep.

“Hmm,” she replied lazily, tipping her face over her
shoulder. She blinked at his exhausted face. His eyes were struggling to focus
on her and his chin was covered in a light layer of stubble. His dark hair was
a mess; some at the back sticking up at an awkward angle. And he was still
wearing the shirt he’d worn the night before. Nevertheless, Allie didn’t think
she’d ever woken up to a more wonderful sight. “Hey you,” she smiled.

“Hi,” he replied, lifting his free hand and rubbing the heel
against his right eye. “You sleep okay?” he managed to ask around a muffled
yawn.

“Wonderfully,” she replied. “You?”

“Yeah,” he nodded, his lips drawing up into a smile. “Pretty
good.”

“I was worried that last night was a dream,” she added, with
a light chuckle.

“Nope,” he tells her, shaking his head without lifting it
from the pillow. “Definitely not a dream, because I’ve got a shocking
headache.”