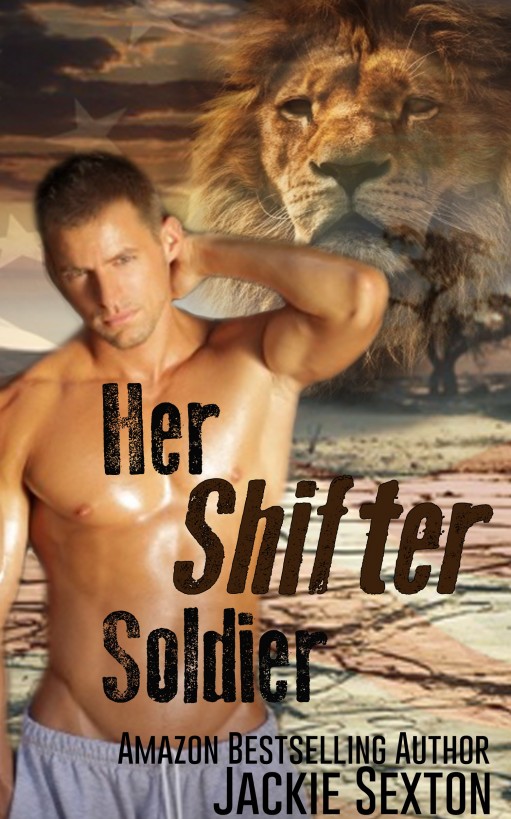 Her Shifter Soldier
Jackie
Sexton
Smashwords
Edition
All Rights
Reserved ©201
4
Moon
Flower Press. First Printing: 201
4
.
All rights
reserved. No part of this publication may be reproduced,
distributed, or transmitted in any form or by any means without the
prior written permission of the author, except in the case of brief
quotations embodied in critical reviews and certain other
noncommercial uses permitted by copyright law.
Her Shifter Soldier
Jackie
Sexton

I couldn’t spend another second looking at
his photograph. He was hugging a small, African child who was
grinning with all her might next to the handsome soldier. But I
knew what he really looked like beneath that heavy, khaki camo.
Years of hanging out on my father’s ranch, watching him build a
shed or tame the horses, led me to to an intense appreciation of
the male form.
Dalton Jacobs glowed like an angel—a sexy,
golden angel with a six-pack and a no-nonsense, tough guy persona.
My heart pounded harder in my chest just thinking about him and how
I was going to see him in just a few hours.

“Looking at the
picture
again
?” my
best friend and sole confidant Shannon chided. I turned and scowled
at her, quickly slamming the photo album shut. I wanted to pretend
like it didn’t affect me, but she knew better. It wasn’t like she
couldn’t hear my heart pounding across the room, desperate to see
his handsome face again.

“It’s not like that,” I mumbled, flushing
red.
“Uh huh,” Shannon called from the kitchen,
rummaging around the shelves for a mug. “That’s why your hair is
down and not in its usual business bun.”
I quickly pulled the elastic band from my
wrist over my hair, gathering it into my typical up-do. I hadn’t
meant to make my efforts so obvious. I just wanted to look casually
nice, like, seeing-an-old-friend nice.
An old friend who was incredibly hot.
“No leave it down! You look so gooood,” she
moaned, flouncing down at the breakfast nook table across from me,
coffee in hand.
“I’m sure I look silly,” I mumbled, patting
down any potential fly-aways and avoiding her gaze.
“You’re a kindergarten teacher, not dead,”
she sighed, obviously exasperated with me. “How are you going to
get that hunk of a man to fall in love with you if you don’t?”
“Shannon,” I growled, “you know Dalton is
just a friend. Nothing more.”
“Ugh, what a waste.” Shannon took a long sip
of her coffee, which I saw as the perfect opportunity to slip into
the kitchen myself. If I could occupy myself with a cup of tea,
maybe there was a chance she would drop the topic and move onto
something else.
“Are you excited for your new job?” I called
over the kitchen bar as I set the kettle.
“Yes, but don’t change the subject. Why
won’t you give Dalton a chance?” she pressed, turning around to
scrutinize me with her pretty blue eyes. I dropped my gaze onto the
olive green kettle and stayed quiet for a moment. The truth was I
couldn’t just say it. The awful truth was too much—it was a
thudding ache in my chest, a small rodent slowly clawing its way
through my heart.
My brother Eric was dead thanks to some
secret terrorist organization in the heart of Africa. He was never
coming back, and I couldn’t hold servicemen any closer if I could
help it. It was a matter of self-preservation. It wasn’t about
whether I could love Dalton or not.

As if she read my mind,
Shannon’s voice became gentle and soft like fleece. “Don’t let what
happened all those years ago keep you from something
beautiful.”

Tears brimmed in my eyes, and I turned
around to wipe them away. I hardly wore any make-up, but even the
lightest brush of mascara would look like insane torrents of muck
against my alabaster skin.
I held my arms stiffly to my side,
remembering my brother’s warm, inviting face. He always had a smile
on, one that shone so brightly it could put the sun to shame.

Except for the day we
buried him. Then his eyes were shut, his wonderful, deep brown
windows to the world, out like snuffed candles. He wasn’t the man I
knew, so full of life and love. He was nothing but a corpse, ready
to take to the earth as its final destination.

“I’m sorr—” Shannon
started, but then there was a neat, hard-fisted rap at the door. My
heart skipped a beat, and I quickly reached for a paper towel to
dab at my pathetic, tear-stricken face.

“I got it,” Shannon said quickly, and I
could hear her chair skit across the linoleum floor.

I quickly checked myself in
the back of a spoon, appraising my distorted reflection for any
signs of mascara tracks. It shouldn’t have been him so soon, and
yet I had the feeling it was by the excited tone of Shannon’s
voice.

“Jessie are you...indisposed?” Shannon
called back to me. Shit. It was definitely him.
“I’m...fine!” I called back, straightening
out the hem of my floral dress. I suddenly felt self-conscious of
such a feminine choice—I usually wore dark jeans and a button up
shirt, keeping it plain and professional just in case a
six-year-old decided to smear glue on me.
I heard the heavy clicking of his boots and
inhaled sharply.

“Jessica,” Dalton said, his
voice even and yet filled with a deep, resonating desire. I felt my
knees weaken and raised a palm casually, my hands clamming like I
was a kindergartener myself rather than a person who taught
them.

Orphans of War by Leah Fleming
The Boy Book by E. Lockhart
Black British by Hebe de Souza
I Am Regina by Sally M. Keehn
Murder at Midnight by Avi
The Black Swan by Philippa Carr
Best Kept Secrets by Sandra Brown
The Saint and the People Importers by Leslie Charteris
Living to Tell the Tale by Gabriel García Márquez, Edith Grossman
Homeless by Ms. Michel Moore
Our partner