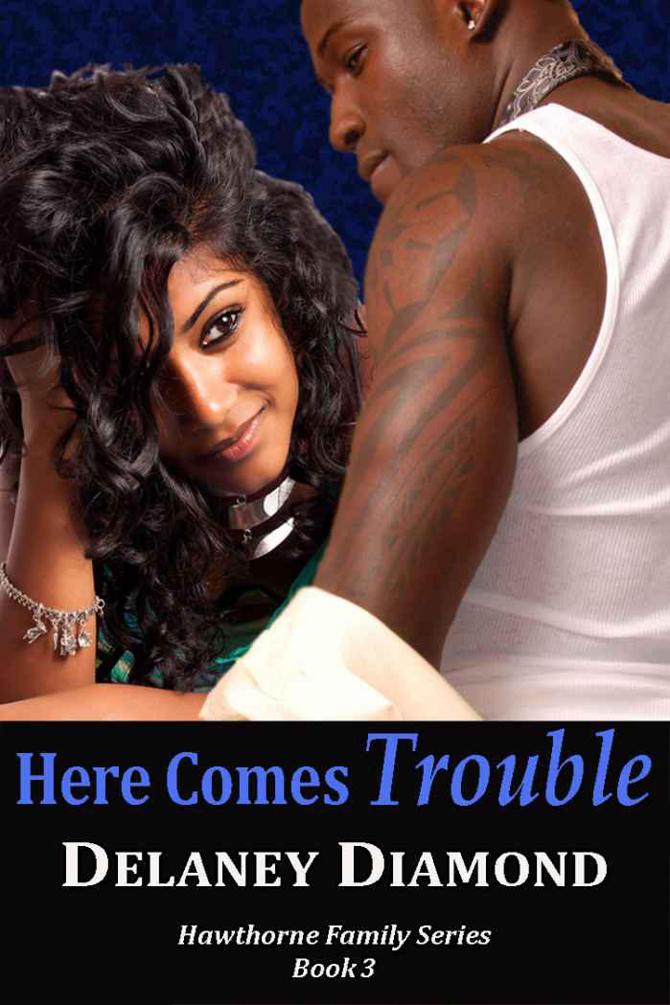 Who doesn’t love a bad boy?

Lorena Vega knows better than to have anything else to do with Matthew Hawthorne. Then he comes to her and asks for her help in writing a proposal for a grant to benefit the community center where he volunteers. She agrees to do the work, but she has her guard up, because having Matthew in her life again is a problem she doesn’t need.

Matthew still carries some guilt from when he hurt Lorena. Seeing her again for the first time in months makes him realize what a huge mistake he made, and he wants another chance to be the kind of man she deserves. He’s determined to win her back and prove he’s not the player he used to be, and nothing will stand in his way.

Not even the new man in her life.

This book is a work of fiction. All names, characters, locations, and incidents are products of the author's imagination, or have been used fictitiously. Any resemblance to actual persons living or dead, locales, or events is entirely coincidental.
No part of this e-book may be reproduced or shared by any electronic or mechanical means, including but not limited to printing, file sharing, and e-mail, without prior written permission from Delaney Diamond.

To all my wonderful fans! Without your support, I would not be able to do what I love. Thank you.

Congratulations to Rahab Mugwanja and Reshemah Wright, who won a fan contest and allowed me to create characters with their names in this novel.

The phone rang in Lorena Vega’s office. By the double ring, she knew it was Rahab, the receptionist. Seated at her desk, she answered.

“Hi, Lorena.” The Kenyan transplant’s accented voice came over the line. “Matthew Hawthorne is still waiting out here. What should I tell him?”

Lorena shoved her black wire-framed glasses higher on the bridge of her nose. “Tell him I’m still on a conference call.” She hated asking the receptionist to lie, but she had no interest in seeing or speaking to Matthew. She never wanted to see him again, and he knew that, but he’d still shown up uninvited.

Rahab agreed and hung up.

With a sigh, Lorena rested her forehead in her hand. She’d leased this office in a building east of Atlanta, in Decatur, where she lived. Not only was she happy because she could walk to work, but the offices were conveniently located near restaurants and public transportation. She and her office mates shared the costs of a receptionist and meeting rooms, which turned out to be at a fraction of what it would cost her to lease space on her own.

Now, without notice, Matthew had arrived to disrupt her day. She’d put off talking to him for weeks, but she’d listened to every voice mail and read every text and e-mail in his constant efforts to try to reach her. She’d been somewhat amused as, over time, the tone of his communication changed from polite to cajoling to irritated. Ignoring him had given her great pleasure. After the way he’d dumped her, he was lucky that was all she had done.

She’d really wanted to key the paint off his precious Lexus SUV, or smash a brick through one of the tinted windows. Instead, she’d kept her fiery temper under control and worked out her frustrations on her regular runs.

Getting involved with him had been a huge mistake, and she wished she could go back in time and erase her actions. It wasn’t as if she hadn’t known he was no good for her. She simply hadn’t cared. Unfortunately, there were no do-overs in life, and she had to live with the consequences of her behavior.

Lorena frowned. “What do you mean you think?”

“He asked me where the restrooms were, but I never saw him come back out to the lobby. He must have slipped out while I was on the phone or my back was turned.”

Lorena worried the inside of her lip with her teeth. Matthew knew where the restrooms were because not only had he helped her move into this office, he’d returned numerous times. She turned 180 degrees in her chair and peered out the white horizontal blinds to the parking lot below. His SUV still sat outside. She pursed her lips and frowned. “I’m sure he’s gone. He should’ve gotten the hint.”

“Of course you know you have to tell me what the story is between the two of you.”

Rahab Mugwanja had been working there only a few weeks. She and Lorena hit it off right away. Compared to the last receptionist, Rahab was a godsend. She was professional, efficient, and always had a bright smile for visitors. Her infectious laugh could often be heard as she chatted with the other business owners in the halls.

“Maybe one of these days I’ll explain. But do me a favor—if he calls or comes by again, make up an excuse for me, okay?”

Rahab tutted her disapproval. “Okay, but what did he
do
?
He’s so fine. It couldn’t have been that bad.”

Lorena smiled wryly. “Trust me, it’s bad. And forgiveness, well…right now, I don’t have it in me.”

After she hung up, Lorena stood and walked over to the single window in her office. Through the blinds, she saw Matthew’s black vehicle in the parking lot, glimmering from its most recent wax job.

She folded her arms across her chest and waited. She was over him, of course, but foolishly, she wanted to see him, looked forward to a glimpse from several stories up. He should make an appearance soon. Anticipation built inside of her as the seconds dragged by.

Lorena’s heart leapfrogged into her throat at the familiar voice. She whirled around to see Matthew standing with his left shoulder resting against the doorframe.

How unfair, he looked amazing—as usual. At a few inches over six feet, he towered over the average woman and was taller than the average man. Because he regularly worked out, his hard, muscular body hadn’t changed since his college days when he played football.

He always took great care with his appearance. From his weekly barbershop visits to make sure his Caesar haircut stayed low-cut and finely trimmed, to picking out the right clothes and sending them out to be cleaned and pressed. Almost everything he did was for one purpose: to capture the attention of the opposite sex.

“What are you still doing here?” she asked. “Rahab thought you must have slipped out when she wasn’t looking.”

“She was wrong. I know you see my truck is still out there. That’s why you’re standing at the window, isn’t it? To see when I leave?”

Patches of color tinged her caramel cheeks. “Don’t flatter yourself. What do you want?” she demanded.

His body had tightened the minute she turned her brown gaze on him. He’d missed her, but he hadn’t realized the extent until he saw her again. He’d been enjoying the view from behind, the tailored slacks hugging her trim waist and covering what he knew to be toned runner’s legs. Her lean body was muscular, but managed to be soft and feminine at the same time.

Damn, she looks good
, he thought. Why had they broken up again?

She was all buttoned up in her very proper silk blouse with pearl buttons down the front. She’d pulled her curly hair away from her face and pinned it up, bringing attention to her features—a button nose, full lips painted a becoming peachy color, and the biggest, prettiest brown eyes he’d ever seen on a woman. Those eyes had once been filled with hope and trust whenever they looked at him, until he snuffed it out of them.

Almost breathless at the sight of her, he managed to maintain a nonchalant demeanor leaning against the doorframe. If he didn’t get his thoughts under control soon, she’d have a pretty good idea of the images running through his mind, which included bending her over the desk, as he had when she first moved into this office space. The memory of her hoarse cries as his fingers bit into her hips still made his gut clench.

They’d made use of every flat surface in there—the wall, her desk, and the floor—on more than one occasion. He almost smiled as he recalled one particular time kissing her skin to ease the sting of the carpet burns on her back.

Reluctantly, he came back to the present. “You’ve been avoiding me.”

“I haven’t been avoiding you. I’ve been busy. I have a young business, and it takes a lot of my time.” Her eyes challenged him, daring him to disprove what she’d said.

“Did you bother to listen to any of my messages? I have a job for you.”

“I’m too busy to take on new clients.”

“My money’s green and spends the same as everyone else’s.”

“Well, I don’t like you. Is that better?” she snapped.

“Now we have that out of the way,” Matthew began, straightening, “do you think you can put aside your feelings for a minute and hear me out?”

Lorena watched in dismay as Matthew closed the door. Her first instinct was to run and hide since being rude to him hadn’t worked as she’d hoped. Of course, that was impossible now that he’d set his eyes on her. She reminded herself she had nothing to fear from him. He was, after all, just a man. A giant of a man with a powerfully muscular physique, a strong jaw, beautifully broad nose, and smooth skin the color of espresso, but still a man. He couldn’t cause her any more pain than he already had. She wouldn’t let him.

Venture Untamed (The Venture Books) by Russell, R.H.
Echoes of Pemberley by Hensley, Cynthia Ingram
The Invisible Wall by Harry Bernstein
The Thistle and the Rose by Jean Plaidy
Defying The Alliance (Novokin Alliance Invasion 1) by Bobbi Ross
The Girl at Midnight by Melissa Grey
Picking the Ballad's Bones by Elizabeth Ann Scarborough
Texas and Tarantulas by Bailey Bradford
Dance With Me by Heidi Cullinan
Dancing in the Shadows by Anne Saunders
Our partner