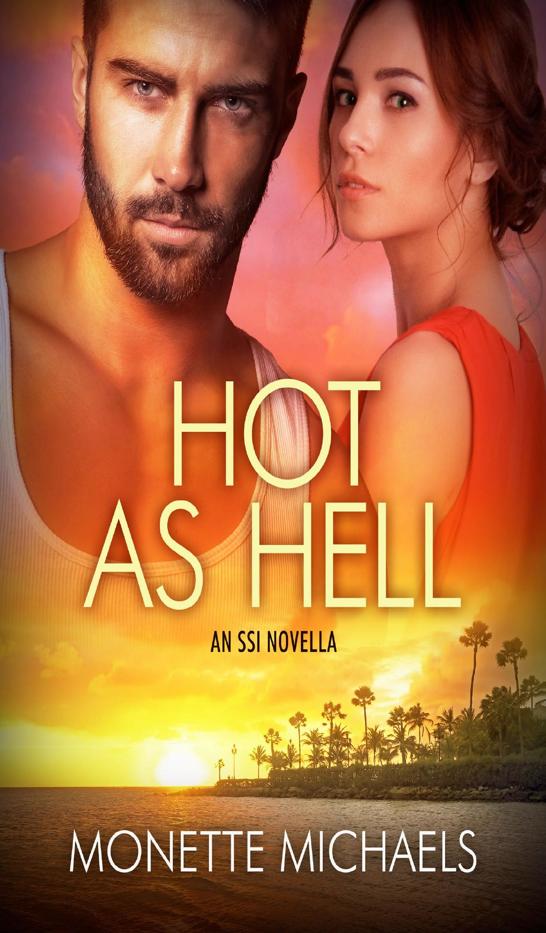 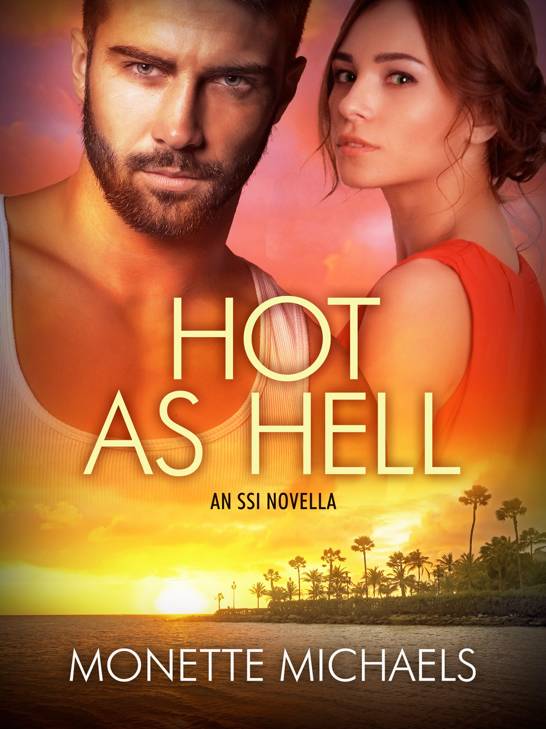 All rights reserved. No part of this publication may be reproduced, stored in a retrieval system, or

transmitted in any form or by any means, electronic, mechanical, recording or otherwise, without the

prior written permission of the author.

This is a work of fiction. The characters, incidents and dialogues in this book are of the author’s

imagination and are not to be construed as real. Any resemblance to actual events or persons, living or

Fed up with her incompetent boss, Interpol agent Dawn Wilson accepts a job with

Security Specialists International. Her first assignment forces her into close contact with

When the SSI team, plus a forced-on-leave Sam, gathers in Aruba to take down a

traitor to the United States, Sam soon discovers the beautiful, feisty Dawn’s skills are a

complete match for his own.

As the fairly low-risk operation goes FUBAR, their attraction ignites and turns hot as

No book is written in a vacuum. I count on a small band of very special people to keep

me centered and on task. Without these people, I would never have the courage to put

my work out there. So, here is where I thank them for taking time from their lives to

help me polish my fictional worlds.

of tough love. So, I’ll just say: Thanks, Cheri.

Thanks must also go to my band of beta-readers: Debbie Kline, Valerie Samouillan, and

Gail Northman. These ladies are long-time fans and catch all the pesky back story and

series logic issues for me.

As always, many thanks to Ezra Solomon, my copy editor. He catches everything the rest

Finally, major kudos to April Martinez for another fabulous cover and to Gail Northman

(my triple threat!) for putting my manuscript in all the formats I don’t know how to do.

You ladies rock and make my work look so professional.

To my SSI fans. Without you Sam would never have found his HEA.

“Black as the devil, hot as hell, pure as an angel, sweet as love.”

Sam Crocker sat in the boarding area, waiting for his flight to Cartagena. Feet propped up on

a window ledge, he listened to the rings over his secure satellite phone as he eyed the ground crew

fueling a commercial jet. He was tired. He was pissed. Nothing had gone the way he’d planned since

Maybe this call would set him on the path toward achieving his goals.

“Redmond.” The abrupt voice of his old Marine buddy growled in his ear. Conn, SSI’s man in

Central and South America, had left Belize immediately after the end of the op.

“Hey, Conn—” Sam kept his voice low and atonal so as to make his conversation more difficult

to overhear. The boarding area was crowded and no one seemed to be paying attention to him. But

a chance someone might listen in, and old habits were hard to break, especially when said habits had

kept him alive and mostly whole.

“Anything.” His buddy’s immediate response was a relief. “Whatcha need?”

“To be put in touch with Tweeter Walsh—and Ren Maddox.”

For the umpteenth time in the last two and a half days, Sam rubbed a finger over the cheek

the petite, but fiery Dawn Wilson had slapped. While the little Brit packed quite a wallop—the redness

him. No woman had ever gotten under his skin and lodged herself in his gut the way the little hell cat

had. Maybe it was the way she handled a submachine gun like a seasoned Marine or the fact she

swore like a sailor. Lord knew, she packed a lot of honor, courage, and strength into her tiny body—and,

fuck, what a body. He’d been able to tell she was curvy even through the dark, Goth-like disguise she’d

worn. She was a pint-sized package of trouble—trouble he hungered to explore more fully.

Immediately after reporting into his CIA handler, he’d gone on the hunt for Dawn. He’d been

one step behind her ever since.

Force headquarters. There, a man by the name of Ron Lloyd, an officious asshole, refused to tell Sam

where Dawn was or relay a message. Every territorial instinct Sam possessed told him the fucker

wanted Dawn for himself and saw Sam as competition for the little Brit’s sole attention. He was right.

Sam’s lips quirked upward as he pictured what his next meeting with Dawn might be like. He

planned to storm all her defenses, a tactic guaranteed to ruffle her fur. After which, he would wear the

little Brit down until he had her purring like a kitten and cuddling up next to him.

But before he could make a move on Dawn, he had to take care of some unfinished business.

“Why now?” Conn asked. “You need to give Ren time to adjust to you being one of the good

guys. Tweeter’s post-operation report on Belize will go a long way in helping the situation, but I’m not

sure Ren’s quite ready to forgive and forget. I know Vanko isn’t.”

After working deep undercover for so many years, being painted as a bad guy was par for the

course. But still, Sam wondered how many times he’d have to tell Maddox that Maddox’s wife Keely

hadn’t been in any danger from him. And, hell, he got shot in the back protecting Petriv’s woman

Elana. If that wasn’t evidence of his being on the side of angels, what was?

“I’ll deal with Maddox—and Petriv—when the time comes.” Which would probably be sooner

rather than later since Sam’s current quarry was their common enemy. “I need Tweeter to find out

where Syd MacLean is right now and get current intel on the fucker’s activities.”

Sam’s jaw tightened. “I’m going after the bastard and will end him—one way or another.”

Syd MacLean or, as the treasonous fucker was now known, Sergio Manuel Lazaro a.k.a. Oraio,

had sold his country’s secrets and exposed the U.S.’s black ops teams to their enemies. MacLean’s

worldwide. His latest venture, sex slave trafficking, was just another abomination on top of all the

other abominations MacLean had created while seeking wealth and power.

“Didn’t the CIA get the intel Tweeter sent to the NSA?” Conn asked.

“Yeah. But while the CIA might believe the evidence that Sergio Manuel Lazaro, a legitimate

Brazilian businessman, was the crook Oraio, they didn’t want to make the leap that the two were one

and the same as Syd MacLean, U.S. traitor. So, after I made my report on Belize, my handler put me

on a two-month enforced leave. Said I’d been undercover too long and needed a break… to rest.” Sam

blew out a disgusted breath.

and my gut. Even with Tweeter and his sister Keely throwing their weight behind my conclusions, the

CIA—and Brazil’s government—weren’t ready to go after a man with Lazaro’s kind of money and clout.

With concrete proof that Lazaro-Oraio is MacLean, the United States could send in a spec ops team to

kidnap the fucking traitor’s ass and bring him back to the U.S. to stand trial.”

“Hoo-rah.” Conn paused. “Okay, I’ll see what I can do in getting Ren and Keely to help you.

Tweeter’s out of the picture for now. He and DJ are getting married in Vegas today.”

“Married?” Sam whistled. “Well, I shouldn’t be surprised. The sexual vibes coming off those

two were as hot as hell. I’ll have to send them a wedding gift. Maybe his-and-her handguns?”

Conn snickered. “That should work. You still in Belize?”

“For maybe twenty more minutes. I’m on the next commercial flight to Cartagena and your

place. Figured if I went after MacLean that Maddox might bend enough to lend me you as my backup.”

Conn chuckled. “If Ren doesn’t sign off on it, I’ll take some time off and go in with you.”

“Thanks, Conn. If we need more boots on the ground, I have some mercs I’ve worked with

who’d love to get a piece of MacLean’s ass.”

“Bet there’s a lot of ex-military who’d help us out if called upon. Need me to pick you up at the

“No. I arranged for a rental. I should be at your place by dinnertime. Pick a place for a late meal,

preferably one with good beer on tap, and I’ll buy.”

“
Semper fi
, brother.” Sam disconnected and leaned back in his chair, a big smile on his face.

Thank fuck for the Marine brotherhood.

on the joint drug task force. Their goal had been to collect intelligence on the shady Brazilian Oraio in

out his Belizean drug operations, if possible. Since both objectives had been accomplished, this would

be the task force’s last meeting.

in her mind—that Ron Lloyd was an utter twat.

On paper, Ron was the nominal leader of the Interpol team in Belize. Unfortunately, the words

intelligence, leader, and Ron didn’t belong in the same sentence. A product of mediocre prep schools,

Ron had risen to his current level of incompetency through political connections alone. The man didn’t

understand how to run a law enforcement team, especially one which involved undercover operations