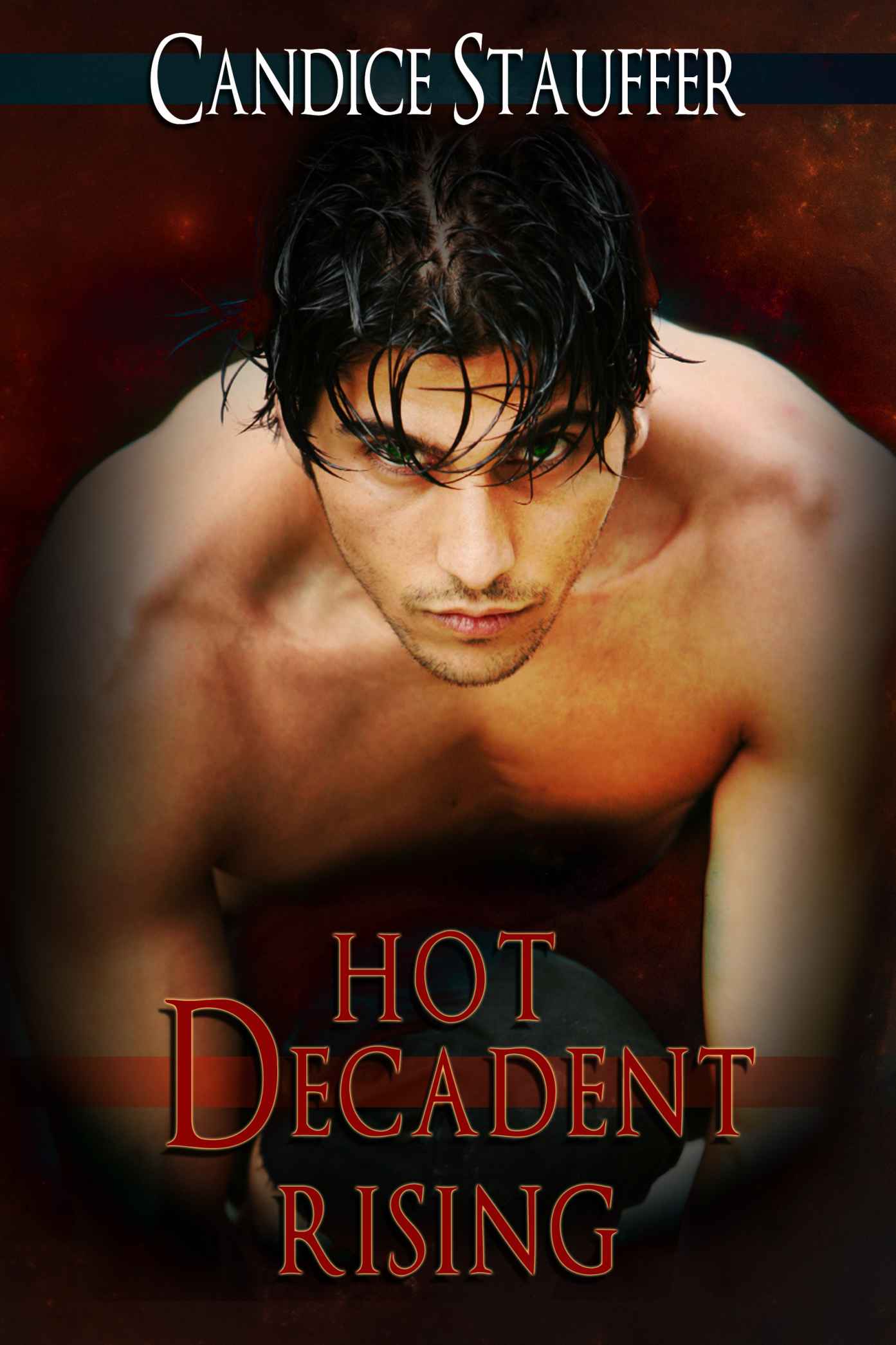 Names, characters, and
events depicted in this book are products of the author’s imagination or are
used fictitiously. Any resemblance to actual events, places, organizations, or
persons, living or dead, is entirely coincidental and beyond the intent of the
author.

No part of this
book may be reproduced or transmitted in any form or by any means, electronic
or mechanical, including photocopying, recording, or by any information storage
and retrieval system, without permission in writing from the author.

Published in the
United States

He had definitely met his match in her, a woman as
passionate as sin and as hot as Hell’s rampant flames.

“I’m
not going to lie. That was the single most awesome moment of my life. I can’t
believe she called you an aggravating as hell, leg humping poodle.” Cain picked
up the jerky she’d tossed and took a bite. “You should’ve
fetched
it.”
He took another bite. “But I’m glad you didn’t.”

“Shut up.” When Eli realized she had
been targeted by a thief his natural protective instincts kicked in. He was
shocked by the fear he felt when she began to struggle with the man to take the
knife. It was only a matter of seconds before he got to her, but it seemed much
longer.

“Do you think you could piss her off and
get her to throw some more? It really is tasty stuff. I’d get on my hind legs
and beg pretty for another piece.”

To say he was shocked when she’d tossed the
meat and then ordered him to fetch it was a major understatement. He had
definitely met his match in her, a woman as passionate as sin and as hot as
Hell’s rampant flames. “She called me a leg humping poodle.”

Growling, Eli stared at him.

“What? She said aggravating as hell.”

Eli walked away
from him. He had just reached Kara’s door when she opened it and plowed into
him. “Do you see it?”

From over her
head he took a look inside. He didn’t see anything except for a tiny…

“Spider!” she
yelled. “Holy shit! Right there! It’s a spider!” Her nails digging deep into
his flesh she gripped his arm. “You see it, right?”

“It won’t hurt
you. It’s more afraid of you than you are of it.”

As if to prove
he’d lied, the spider turned to face them as if staring them down.

A few seconds
later it raced toward them. Screaming, she did the wildest dance all the way
around him to make sure he was between her and the spider as it moved past
them. Next, she pushed him to the side and shut the door on his face.

Literally, the
door slammed into his face. He was still standing there staring at the door
when she opened it. “Come in. It’s cold out here. Hurry up before that…that
hideous thing gets back in here.”

Against his
better judgment, for something just wasn’t right about the smile on her face,
he walked inside and shut the door. When he turned to face her she was standing
just out of reach with a gun aimed at him.

“What were you
doing outside the door?” She asked.

Holding up his
hands in surrender, he gestured toward the door. “The hideous thing went that
way.”

What reviewers are saying about
Candice’s
books

If you love
romance novels for the
hawt
adult scenes, do not
worry—there are plenty of those

I am so glad
that I read this book. In fact, I had a very hard time putting it down. The
para
elements were both familiar (vampire and witch and
weres
) and new (hot dragon/immortals). The minor characters
were amazing. I am so excited this is going to be a series so I can learn more
about them. Overall, I really enjoyed this book and will definitely be reading
the next book when it is released.

OMGosh
this book takes
you from the pits of a living hell on a journey of love, lust, passion,
action-packed fight sequences, not mention very vivid, HOT, and Steamy Sex
scenes! I am honored to have been able to
Read~n~Review
this book! The characters are personable, detailed and so realistic, that I
found myself yelling at Caylee for being so stubborn by not making better
choices, laughing when she teasingly shows Hayden her naught, and being
terrified when her past is revealed or when she comes face to face with a very,
lustful and twisted vampire! The world building is consistent, passionate, and
spell-binding as Candice Stauffer creates a storyline with a powerful punch to
entertain and intrigue the reader with the hope of more to come. I highly
recommend this book! This is the first book of her series and what an
introduction it is!
~ Wendy
Lovetiggi
Nielson,
Lovetiggi’s
Book Reviews

I highly
recommend this new series from Candice Stauffer

I loved this
book so much. I was hooked from the start and loved the ride Candice took me on
while reading. This book is for adults as the sex scenes are HOT!!! And the
lead male Haden is even HOTTER!!! I love the spin Candice puts in this book
with the demons. She has them as savers of our world instead of wanting to
destroy it and everyone in their path. The characters are flawed but that is
what makes them perfect. I was drawn into Caylee and Haden’s
world
…
I love the side characters just as much and cannot wait for
their stories to be told. We get just enough about them that leaves you wanting
more of this amazing world Candice has written. I highly recommend this new
series from Candice Stauffer. She is a Must watch author.
~ Sabrina Ford,
Paranormal
Reads

What a wonderful
short read!

I loved
Candice's first book, so when I saw she had released this vampire tale, I had
to buy it immediately. The story flowed beautifully and brought me back to the
world of her novel. The beautiful thing about this piece is that you did not
need to read her novel to have background for the story. It is a complete work,
in and of itself. Also, my favorite character (Mia) from her novel made an
appearance which filled my desire to learn more about Mia, as I desperately
away the release of her next book, which I believe will feature Mia :). This is
a great choice if you want a short vampire read, want to read more from
Candice, or want to see if Candice's style is one that you would enjoy.
~
Delphina
Zmom
Miyares
,
Delphina
Reads Too Much

Joseph Payne is a two
thousand year old warrior. One of his favorite pastimes is
facebook
.
Not his own mind you, he likes messing with profiles of his friends. Six months
ago he met Mia Harte. He’s been around her ever since….even though she does all
she can to keep him away. He knows she is Lycan and can’t be his mate, but that
don’t stop him from loving and protecting her. Not even though she’s dying and
not even when Eli Thomas and his pack come to claim her.

Mia knows her time is
running out on earth and decides to enjoy what is left with Joseph. Together
they have vampires and ghouls to fight and a Lycan who says she belongs to him.
She even discovers that there is such a thing as a good vampire, unbelievable!
Judy~
Just Judy's Jumbles

AFTER
SPENDING NEARLY three hours stuck in a morning rush hour traffic jam, Eli
Thomas stopped for gas just a few miles outside Portland, Oregon. Following
several failed attempts to use every card in his wallet at the pump, he
realized he didn’t have any other choice than to do the last thing he wanted to
do. He needed to go inside the station to pay. From the looks of it, the place
was jam-packed. He’d rather be trapped on the highway again, watching two
bratty kids pick their noses while making rude faces at him through their rear
window.

Just the thought of going inside made
him physically sick. He absolutely hated being confined in any building with so
many humans gathered all around. Doing so always made him feel claustrophobic,
even to the point of getting nauseous. They each had their own unique, truly
unpleasant odor. A group of humans equaled a foul stench. Besides that,
carelessly tossing out all sorts of unsavory thoughts, humans had traumatized
him too many times to count. Yes. Traumatized. He’d never be too proud to admit
it to. Humans absolutely freaked him out. They rarely made any attempt to
shield their minds. Nothing could be more illogical. Some thoughts should
never, for
any
reason, be shared.

Removing from his wallet the first card
he’d tried, he decided to give it one last shot. “C’mon.” Once again the card
was declined. “Damn it.”

“I’ve heard from a fairly reliable
source that doing the same thing over and over again in the same manner and
expecting a different outcome is a sure indication of a person being totally
batty.”

“What do you…?” He had every intention
of making sure his voice was threatening, as he turned to face the woman who’d
snuck up on him. He’d learned over the years that being aggressive was a great
way to avoid conversation. He wasn’t the chatty sort of person. Then, he saw
her. Something strange began to happen to him. Meeting her deep, dark brown
gaze momentarily stole his ability to speak. To think. He actually felt
lightheaded.

For a moment, he truly wondered if
she was making an effort to put him under a spell. Then, he quickly rejected
the notion for the simple fact that she was human. She was an inferior being.
He found his voice, “What do you want?” He wasn’t mad, not really. He was
shocked and quite curious. She shouldn’t have been able to sneak up on him from
behind. She sure as hell shouldn’t have been able to touch the back of his
shoulder, before he sensed her presence. Well, he hadn’t really sensed it at
all. He didn’t know she was there until she’d touched him.

“Yes.” Something else was off about her.
She didn’t stink. Why didn’t she smell bad?

“Hmmm.” Rather than take her time as he
was used to women doing, she quickly looked him up and down before meeting his
gaze. “Nothing.” Pausing just long enough for him to feel self-conscious, she
smirked. “Absolutely, positively nothing. I just wanted to let you know that
you’re wasting your time.”

She inclined her head toward the card in
his hand. “None of the card machines have worked on any of these pumps for the
past year. If you want gas you’ll need to go inside to pay.”

Unable to rid his mind from the
impression of bright red flashing lights, accompanied by a blaring alarm, time
seemed to slow down as he stared at her. Actually, it stopped as something in
her eyes compelled him to inch closer to her. It was powerful. A force unlike
anything he’d even encountered. It captured him. Entirely. Completely. It
wrapped around him like an uncomfortably tight cocoon. It trapped him.