Read How to Help a Friend in an Abusive Relationship: What You Need to Know About Domestic Violence Online

How to Help a Friend in an Abusive Relationship: What You Need to Know About Domestic Violence

BOOK: How to Help a Friend in an Abusive Relationship: What You Need to Know About Domestic Violence
5.72Mb size Format: txt, pdf, ePub
Read Book Download Book
ads 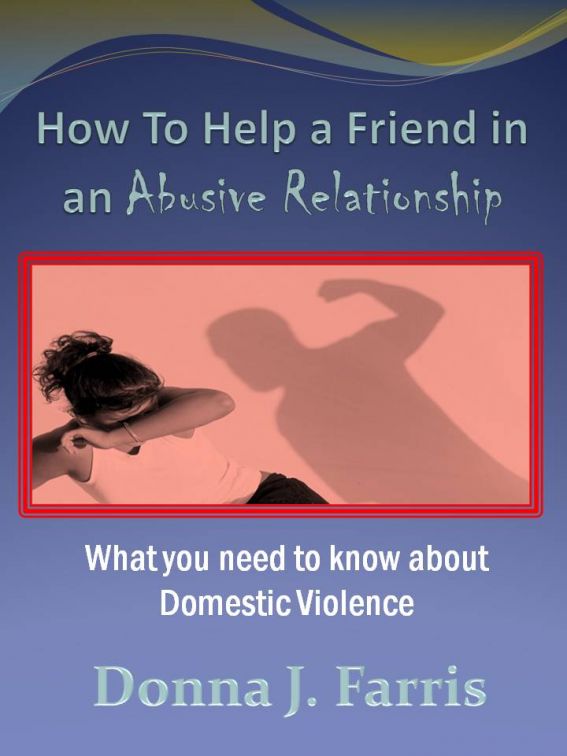 How to Help a Friend in an Abusive Relationship
What You Need to Know About Domestic Violence
By Donna J. Farris

This ebook is
licensed for your personal enjoyment only. This ebook may not be
re-sold or given away to other people. If you would like to share
this book with another person, please purchase an additional copy
for each recipient. If you’re reading this book and did not
purchase it, or it was not purchased for your use only, then please
return to
Smashwords.com
and
purchase your own copy. Thank you for respecting the hard work of
this author.

This book is dedicated to those with the
courage to help a friend in need.

Chapter 3 - What the
Bible Says About Domestic Violence

In addressing the
complex and often perplexing issues that permeate the subject of
domestic violence our best insights often come by simply listening
to the victims. Consider the following true quotes from abused
women:

1-
“Six weeks after I married my
husband, I discovered he had a cruel, violent streak. His angry
outbursts (such as throwing a pan through the sliding glass door in
the kitchen, habitually kicking the dog, his endless ranting and
ravings about simple inconveniences, and his frightening threats to
hurt me or the kids) got progressively worse until I left one
night. But he followed me and tried to force my car off the road.
Our newborn son was in the back seat...The church we had been
attending encouraged me to submit to his authority and return home
so I returned. Despite weeks of pastoral counsel, the violence
seemed to get worse. I finally decided to leave for good. Now the
church doesn’t want to help me because no one wants to alienate
him. I don’t know how I will be able to raise our three children on
my salary of eleven hundred dollars a month.”

2-
“Unless you’ve been there, you don’t
know what it’s like. For about three years now, my husband has
slapped me across the face, dragged me across the room by my hair,
and refused to allow me to leave the house alone even to go grocery
shopping. I am a virtual prisoner in my own home. He has brutally
raped me on several occasions. We’ve talked to preachers and
counselors who said I should try and make my husband happy while he
was trying to find himself as a man. They said things would get
better. Then they told my husband that if I divorced him, I would
go to hell for sinning against God’s will for marriage. But no one
addressed his abuse. All they said was, ‘have faith in God and
everything will be ok.’”

3-
“My husband professes to be a
Christian. I used to believe him, but I don’t know anymore. The
physical abuse is just the tip of the iceberg. It’s the emotional
part that’s the most painful. He is always telling me I’m in sin;
that I’m not submissive like I’m supposed to be; that I’m
emotionally disturbed and crazy... He is always quoting the Bible
to prove how wrong I am...He is very controlling. He keeps all the
money and I have to go to him for even the smallest things like
shoestrings...[People talk about how it] becomes harder and harder
for women to leave because they get worn down and exhausted from
dealing with the situation and the brainwashing that goes on, and
it is brainwashing. After a while I begin to question myself about
whether his accusations about me are correct. I’m always thinking,
‘What if he’s right?’...No one in my circle of friends or
acquaintances calls me anymore, and no one at church even wants to
sit with me. They all believe his side of the story. I feel so
alone…some days I don’t know if I will make it one more
day.”

4-
“After years of visits to
emergency rooms, reconstructive surgeries, dislocated shoulders,
and more black eyes than I can remember, I finally filed felony
assault charges against my husband only to drop them when he agreed
to pastoral counseling. But during the counseling session, the
pastor continually avoided the issue of spousal abuse so evident
within our marriage. Instead, he focused on what my role as a wife
was. He told me to submit to my husband and try not to ‘set him
off.’ The pastor also indicated that I was expecting too much of my
husband. Yet in all those visits, the pastor never told my husband
about his biblical responsibility to love and care for me. And not
once did the pastor ever reprimand my husband for his violence, ask
him to step down from his leadership position, or refer him to a
batterer’s program. I left those counseling sessions feeling empty,
believing God did not care for me at all...[Removing an eye patch
which revealed a badly swollen eye and bruised face she asked], ‘I
truly hate him for hurting me like this, but what if I really do
burn in hell for breaking up my marriage? And I ask you, could hell
be any worse than having to live like this?’”

***Domestic violence kills four and a half
million women every year.

***Domestic violence is the leading cause of
injury to women between the ages of 15-44 in the United States -
more than car accidents, muggings, rapes and cancer combined.
[
Journal of The American Medical Association
, Surgeon
General, United States Public Health Services, 276, no. 23 (June
17, 1992), 3132.]

***Battering is considered a misdemeanor in
most states rather than a felony. Yet injuries suffered by battered
women are at least as serious as injuries suffered in 90 percent of
violent felony crimes.
[
The Gender Bias Committee’s Domestic
Violence Study,
by Joan Zorza, The National Coalition Against
Domestic Violence Fact Sheet, 1989.]

***A national crime survey labeled the
American home at night the most dangerous place to be and the most
likely setting for homicide to occur.
[
Battered Into
Submission
, James and Phyllis Alsdurf, Wipf and Stock
Publishers, 1998.]

***Domestic Violence is the most
underreported crime in America. Only ten percent of all domestic
violence incidents are ever reported.
[
Report on Domestic
Violence: Net Benefits Cause of the Month,
United States
Federal Bureau of Investigation website:
www.netbenefits.com/causes/html.]

*** Violence occurs on a regular, ongoing
basis in 24-30 percent of all homes in America.
[
Fact Sheet
- Colorado Coalition Against Domestic Violence
, website:
www.psynet.net/ccav, 1998.]

***Up to thirty-five percent of the women who
visit emergency rooms are there for injuries related to ongoing
abuse.
[
The Journal of American Medical Association
,
National Coalition Against Domestic Violence Fact Sheet, 1990.]

***Contrary to the belief that domestic
violence works both ways, in 95% of all domestic violence assaults,
crimes are committed by men against women.
[
Battered But Not
Broken
, Patricia Riddle Gaddis, Judson Press, 1996.]

***About 75% of the calls to law enforcement
for intervention and assistance in domestic violence occur after
separation from batterers. One study revealed that half of the
homicides of female spouses and partners were committed by men
after separation from their batterers.
[
Remarks to the Task
Force on Child Abuse and Neglect,
Senator Barbara Hart, Esquire
Magazine, April, 1992.]

***The National Clearing House for the
Defense of Battered women reports that divorced and separated women
are battered fourteen times as often as women still living with
their partners and account for 75% of all battered women.
[Legislative History of S.B. 924, 1995, passed into law as
California Code of Civil Procedure, as reported in the book,
Stop Domestic Violence - an Acton Plan for Saving Lives
, Lou
Brown, Francios Dubau, and Merritt McKeon, St Martin Press,
1997.]

***The National Coalition against Domestic
Violence says that for every woman who is admitted into a shelter,
two are turned away; a number that more than doubles in some urban
areas.
[
Broken and Battered
, Muriel Canfield, Howard
Publishing Company, 2000.]

***Violence will occur at least once in fifty
percent of all marriages.
[Colorado Coalition Against Domestic
Violence Fact Sheet, 1998, website: www.psynet.net/ccav]

***Roughly every other married woman will at
some point in her marriage experience at least one incident of
physical violence at the hands of her husband.
[
Battered
Into Submission
, James and Phyllis Alsdurf, Wipf and Stock
Publishers, 1998.]

***In the United States, fifty percent of all
homeless women and children are on the streets because they have
fled from an abusive living situation.
[
Legal Reform Efforts
for Battered Women
, report by Elizabeth Schneider,
self-published, 1990.]

***Women who leave their batterers are at a
75 percent greater risk of being killed by the batterer than are
those who stay.
[
Angry Men and the Women Who Love Them,
Paul Hegstrom, Beacon Hill Press, Kansas City, MO,1999.]

***The American family and the American home
are perhaps more violent than any other single American institution
or setting with the exception of the military in time of war.
[
Behind Closed Doors: Violence in the American
Family
, Murray A. Straus, Richard J. Gelles, and Suzanne K.
Steinmetz, Anchor Press, New York, NY, 1981.]

***In almost every instance, outside
intervention is needed to stop the abuse. Even if confronted by
family or friends about his need for treatment, few violators will
stay in a treatment program without a court order. In order to
change their behavior pattern, they need help to see that violent
behavior is abnormal.
[
Abuse in the Family
, Karen Burton
Mains, David C. Cook Publishing Co., 1987.]

***Violence is used by the perpetrator in a
relationship as a means to gain control over the victim.
[
Angry Men and the Women Who Love Them
, Paul Hegstrom,
Beacon Hill Press, Kansas City, MO, 1999.]

***About one-third of the men counseled for
battering at Emerge are professional men who are well respected in
their jobs and their communities. These include doctors,
psychologists, lawyers, ministers, and business executives.
[
For Shelter and Beyond
, Massachusetts Coalition of Battered
Women Service Groups, Boston, MA, 1990.]

***According to a report from United States
Senator Barbara Boxer on September 2, 1993, nine-tenths of all
family violence defendants are never prosecuted, and one third of
the cases that would be considered felonies, if committed by
strangers, are filed as misdemeanors.
[
Angry Men and the
Women Who Love Them
, Paul Hegstrom, Beacon Hill Press, Kansas
City, MO,1999.]

BOOK: How to Help a Friend in an Abusive Relationship: What You Need to Know About Domestic Violence
5.72Mb size Format: txt, pdf, ePub
Read Book Download Book
ads