Read How We Learn Online 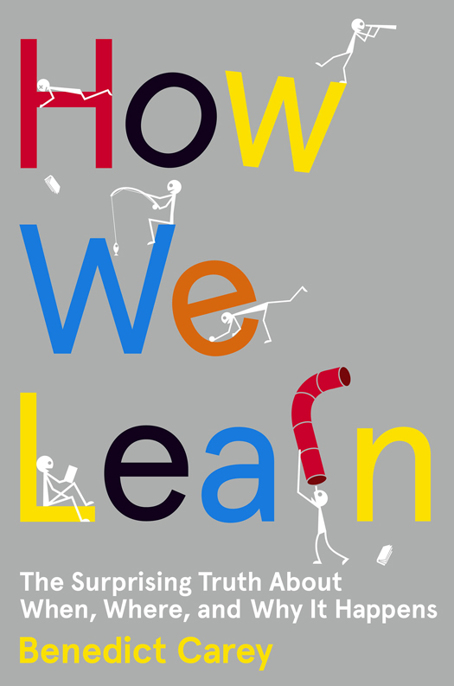 RANDOM HOUSE and the HOUSE colophon are registered trademarks of Random House LLC.

Illustrations by Steve Clark and Zaremba

1. The Story Maker
The Biology of Memory

2. The Power of Forgetting
A New Theory of Learning

3. Breaking Good Habits
The Effect of Context on Learning

4. Spacing Out
The Advantage of Breaking Up Study Time

5. The Hidden Value of Ignorance
The Many Dimensions of Testing

6. The Upside of Distraction
The Role of Incubation in Problem Solving

7. Quitting Before You’re Ahead
The Accumulating Gifts of Percolation

8. Being Mixed Up
Interleaving as an Aid to Comprehension

10. You Snooze, You Win
The Consolidating Role of Sleep

I was a grind.

That was the word for it back in the day: The kid who sweated the details, who made flashcards. A striver, a grade-hog, a worker bee
—that
kid—and I can see him clearly now, almost forty years later, bent over a textbook, squinting in the glow of a cheap desk lamp.

I can see him early in the morning, too, up and studying at five o’clock: sophomore year, high school, his stomach on low boil because he can’t quite master—what? The quadratic formula? The terms of the Louisiana Purchase? The Lend-Lease policy, the mean value theorem, Eliot’s use of irony as a metaphor for … some damn thing?

It’s long gone, the entire curriculum. All that remains is the dread. Time’s running out, there’s too much to learn, and some of it is probably beyond reach. But there’s something else in there, too, a lower-frequency signal that takes a while to pick up, like a dripping faucet in a downstairs bathroom: doubt. The nagging sense of having strayed off the trail when the gifted students were arriving at the lodge without breaking a sweat. Like so many others, I grew up believing that learning was all self-discipline: a hard, lonely climb up the sheer rock face of knowledge to where the smart people lived. I was driven more by a fear of falling than by anything like curiosity or wonder.

That fear made for an odd species of student. To my siblings, I was Mr. Perfect, the serious older brother who got mostly As. To my classmates, I was the Invisible Man, too unsure of my grasp of the material to speak up. I don’t blame my young self, my parents, or my teachers for this split personality. How could I? The only strategy any of us knew for deepening learning—drive yourself like a sled dog—works, to some extent; effort is the single most important factor in academic success.

Yet that was the strategy I was already using. I needed something more, something different—and I felt it had to exist.

The first hint that it did, for me, came in the form of other students, those two or three kids in algebra or history who had—what was it?—a cool head, an ability to do their best without that hunted-animal look. It was as if they’d been told it was okay not to understand everything right away; that it would come in time; that their doubt was itself a valuable instrument. But the real conversion experience for me came later, when applying for college. College was the mission all along, of course. And it failed; I failed. I sent out a dozen applications and got shut down. All those years laboring before the mast and, in the end, I had nothing to show for it but a handful of thin envelopes and one spot on a waiting list—to a college I attended for a year before dropping out.

I had no idea. I aimed too high, I wasn’t perfect enough, I choked on the SATs. No matter. I was too busy feeling rejected to think about it. No, worse than rejected. I felt like a chump. Like I’d been scammed by some bogus self-improvement cult, paid dues to a guru who split with the money. So, after dropping out, I made an attitude adjustment. I loosened my grip. I stopped sprinting. Broadened the margins, to paraphrase Thoreau. It wasn’t so much a grand strategy—I was a teenager, I couldn’t see more than three feet in front of my face—as a simple instinct to pick my head up and look around.

I begged my way into the University of Colorado, sending an application along with a pleading letter. It was a simpler time then; it’s a state school; and I was accepted without much back-and-forth. In Boulder, I began to live more for the day. Hiked a lot, skied a little, consumed too much of everything. I slept in when I could, napped at all hours, and studied here and there, mixing in large doses of mostly legal activities for which large colleges are justifiably known. I’m not saying that I majored in gin and tonics; I never let go of my studies—just allowed them to become
part
of my life, rather than its central purpose. And somewhere in that tangle of good living and bad, I became a student. Not just any student, either, but one who wore the burden lightly, in math and physics, and was willing to risk failure in some very difficult courses.

The change wasn’t sudden or dramatic. No bells rang out, no angels sang. It happened by degrees, like these things do. For years afterward, I thought about college like I suspect many people do: I’d performed pretty well despite my scattered existence, my bad habits. I never stopped to ask whether those habits were, in fact, bad.

In the early 2000s, I began to follow the science of learning and memory as a reporter, first for the
Los Angeles Times
and then for
The New York Times
. This subject—specifically, how the brain learns most efficiently—was not central to my beat. I spent most of my time on larger fields related to behavior, like psychiatry and brain biology. But I kept coming back to learning, because the story was such an improbable one. Here were legit scientists, investigating the effect of apparently trivial things on learning and memory. Background music. Study location, i.e., where you hit the books. Videogame breaks. Honestly, did those things matter at test time, when it came time to perform?

Each finding had an explanation, and each explanation seemed to say something about the brain that wasn’t obvious. And the deeper I looked, the more odd results I found. Distractions can aid learning. Napping does, too. Quitting before a project is done: not all bad, as an almost done project lingers in memory far longer than one that is completed. Taking a test on a subject
before
you know anything about it improves subsequent learning. Something about these findings nagged at me. They’re not quite believable at first, but they’re worth trying—because they’re small, easy, doable. There’s no excuse for ignoring them. In the past few years, every time I have taken on some new project, for work or fun, every time I’ve thought about reviving a long-neglected skill, like classical guitar or speaking Spanish, the self-questioning starts:

“Isn’t there a better way?”

And so I have. After experimenting with many of the techniques described in the studies, I began to feel a creeping familiarity, and it didn’t take long to identify its source: college. My jumbled, ad-hoc approach to learning in Colorado did not precisely embody the latest principles of cognitive science—nothing in the real world is that clean. The rhythm felt similar, though, in the way the studies and techniques seeped into my daily life, into conversation, idle thoughts, even dreams.

That connection was personal, and it got me thinking about the science of learning as a whole, rather than as a list of self-help ideas. The ideas—the techniques—are each sound on their own, that much was clear. The harder part was putting them together. They must fit together somehow, and in time I saw that the only way they could was as oddball features of the underlying system itself—the living brain in action. To say it another way, the collective findings of modern learning science provide much more than a recipe for how to learn more efficiently. They describe a way of life. Once I understood that, I was able to look back on my college experience with new eyes. I’d lightened up on my studies, all right, but in doing so I’d also allowed topics to flow into my nonacademic life in a way I hadn’t before. And it’s when the brain lives with studied material that it reveals its strengths and weaknesses—its limitations and immense possibilities—as a learning machine.

The brain is not like a muscle, at least not in any straightforward sense. It is something else altogether, sensitive to mood, to timing, to circadian rhythms, as well as to location, environment. It registers far more than we’re conscious of and often adds previously unnoticed details when revisiting a memory or learned fact. It works hard at night, during sleep, searching for hidden links and deeper significance in the day’s events. It has a strong preference for meaning over randomness, and finds nonsense offensive. It doesn’t take orders so well, either, as we all know—forgetting precious facts needed for an exam while somehow remembering entire scenes from
The Godfather
or the lineup of the 1986 Boston Red Sox.

If the brain is a learning machine, then it’s an eccentric one. And it performs best when its quirks are exploited.