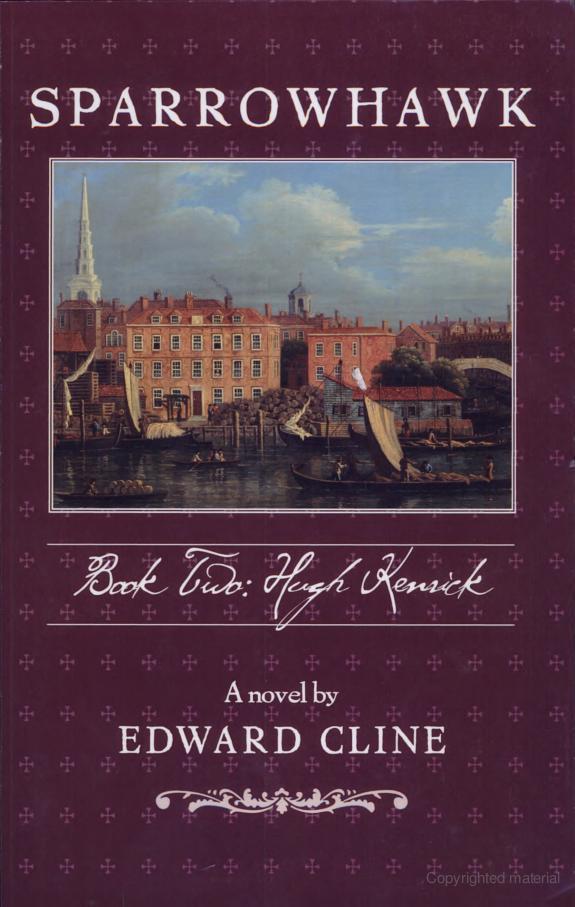 A novel by
EDWARD CLINE

Publisher’s Note: This is a work of fiction. Names, characters,
places, and incidents either are the product of the author’s imagination or are used fictitiously. Any resemblance to actual events, locales, or persons, living or dead, is entirely coincidental.

Chapter 4: The Heart of Oak

Chapter 16: The Member for Canovan

Chapter 18: The Member for Onyxcombe

Chapter 20: The Society of the Pippin

Chapter 33: The Crown Side

Chapter 34: The Defense Side

I am indebted, first and foremost, to two individuals, no longer with us. One confirmed my approach to life, the other confirmed its direction: Ayn Rand, the novelist-philosopher, whose novels I discovered, when a teenager, in the vandalized library of a suburban Pittsburgh boys’ home; and David Lean, the British director, whose
Lawrence of Arabia
I saw the same year, an event that cemented my ambition to become a novelist.

Special fond thanks go to Wayne Barrett, former editor of the
Colonial Williamsburg Journal
, who was certain this novel would see the light of day after having read the first page long ago; and to the BookPress in Williamsburg, whose partners, John Ballinger and John Curtis, also encouraged me and allowed me to rummage through their valuable stock on the track of ideas and materials.

Pat Walsh, editor, together with Robert Tindall and John Gray, have my gratitude for their incisive suggestions and innumerable corrections, and for sharing my confidence that this novel will find a large and appreciative readership.

Lastly, I owe a debt of thanks to the Founders for having given me something worth writing about, and a country in which to write it.

I
N
J
ULY
, 1748,
THE MERCHANTMAN
S
PARROWHAWK
WAS PILOTED UP THE
York River, Virginia. Her first stop on this deep-water gateway to Chesapeake Bay and the Atlantic was Yorktown, a thriving port that boasted several piers, boatworks, tobacco and crop warehouses, palatial homes on the hill overlooking the waterfront, and, of course, several hostelries and taverns. It was one of the vessel’s last calls before she sailed farther up the York for De La Ware Town at the headwaters of the river to begin taking on cargo for the voyage back to England. She had already discharged most of her paying passengers in Charleston, South Carolina, together with most of her inanimate cargo—barrels and crates of British-made merchandise, farm and household implements, pipes and casks of various liquors, books, furniture, and even a few pieces of marble. There also her captain and part-owner, John Ramshaw, sold the indentures of the English and Huguenot redemptioners, and the indentures of his sentenced felons. In Hampton, Virginia, closer to the Bay, he had paused long enough to exchange a portion of his vessel’s ballast of Newcastle coal for one of saltpeter.

Only a few paying passengers remained on board the
Sparrowhawk
as she sailed up the coast to the York River. Among the men and women who filed down the gangboard with their bundles and bags at Yorktown on the hot mid-July afternoon was the McRae family. Ian McRae was the new factor for the firm of Sutherland & Bain of Edinburgh, tobacco importers, and had journeyed these three thousand miles to replace another Scotsman who had died six months before. His store was located in Caxton, Queen Anne County, another port town and tobacco collection point some miles farther up the York. McRae had brought his wife, Madeline, and their five-year-old daughter, Etáin, with him. He expected to live out the balance of his life here.

Ramshaw had other errands to run up-river, and decided to leave the
Sparrowhawk
in Yorktown so his crew could empty the holds of the last of the merchandise and finish proper repairs of the damage she had sustained during an encounter with a French privateer months earlier. He shared with the McRaes the cost of renting a wagon from a local merchant and rode with them to Caxton.

Accompanying him also was the one remaining felon, fourteen-year-old Jack Frake, who had seven and a half years left to serve of his sentence for smuggling in Cornwall, England. He was a hero to the McRaes and Ramshaw, for in the heat of the sea fight he had fired the swivel gun that killed the captain of the predatory French privateer and caused his crew to call off its attack. In Caxton, Ramshaw called on an old friend, county militia officer John Massie, owner of Morland Hall, a large plantation near Caxton. He introduced Jack Frake to him, and sold that man Jack’s eight-year indenture for a penny.

“Can he read, or cipher?” asked Massie, looking out his study window at the boy, who waited on the spacious porch. Sitting at Jack Frake’s feet was a bundle of possessions, including a green suit, a few things he had acquired from other passengers during the
Sparrowhawk’
s voyage, and some books that Ramshaw had given him, including a copy of a novel,
Hyperborea; or, the Adventures of Drury Trantham.

“
Can he read?
” scoffed Ramshaw, puffing on a pipe. “My friend, he has copied out whole books, and helped me with my accounts on the way over! Found some errors I was blind to. Some day, he’ll read His Majesty and Parliament their own Riot Act, you mark my words.” He studied his host for a moment. “Treat him like a son, John, as Skelly and O’Such did, and you’ll win his loyalty. He’s rough at the edges now, but with a firm hand and some fine honing, he’ll become a devil of a man, and then there will be no stopping him! You’ll want him at your side, and on it!”

With earnest farewells and promises to meet again, Ramshaw left Jack Frake behind at Morland Hall two days later. In August the
Sparrowhawk
left Chesapeake Bay and sailed back into the Atlantic.

In October, 1748, French privateers were still harrying English merchantmen, even as the ink dried on the second Treaty of Aix-la-Chapelle, which formally ended the War of the Austrian Succession. Nothing momentous was settled by this treaty. The Pragmatic Sanction, established by Hapsburg Emperor Charles VI in 1720 to define the line of succession to the throne of Austria, was guaranteed, and Maria Theresa’s husband, Francis Stephen, Grand Duke of Tuscany, could more easily occupy it. Lands conquered were restored, except for Silesia, which was grudgingly ceded by Austria to Frederick’s Prussia, an article of the treaty that would
contribute to the resumption of hostilities in the Seven Years’ War. Parts of Italy were added to the possessions of the Spanish Bourbons, which already included Naples and Sicily. The House of Savoy, or Sardinia, was awarded a portion of the Duchy of Milan. The Republic of Genoa, the Duchy of Modena, Bohemia, Hungary, and Holland were also signatories to the treaty. The privateers, however, were not, and for at least a year pretended to have no knowledge of the peace. When the convoys of warships and merchantmen ended, merchant captains ventured out on the high seas at their own risk. The Admiralty turned a deaf ear to stories of the privateers’ numerous depredations.

England’s only gains were some tenuous border adjustments and concessions in North America from Spain and France. These articles, including the one returning Louisbourg in Nova Scotia to the French in exchange for the return of Madras in India to the English, would serve to precipitate the Seven Years’ War as well. Assurances were also provided that the House of Hanover, to which George II belonged, and whose political status in Germany was of constant anxiety to him, would retain its right of succession in the German states and on the English throne. George II, Elector of Hanover, both feared the designs of his brother-in-law Frederick the Great on Hanover and other German states; and envied his standing army of 80,000 men. English law prevented the sovereign from having such a toy. George II was not a keen political observer, but at least he knew that a king with a large standing army at his disposal would always be tempted—even driven—to do something with it. The cost of maintaining such an instrument of power could always be offset with the conquest by it of a rich and influential state. Hanover was such a state.

The peace was a vehicle of mutual convenience for all the signatories, an extended cease-fire tacitly contrived to allow them to catch their wind before continuing the contest seven years later. No one familiar with the byzantine, treacherous tangle of Continental politics, with its maze of treaties, pacts and alliances, with its smoldering jealousies, codicilled secret agreements and xenophobic court protocols, culminating in Aix-la-Chapelle, was fooled or beguiled by the Treaty of 1748, especially not the diplomats and statesmen responsible for it. At the same time, however, everyone wished most earnestly to believe in its beneficent longevity.

As if to augur the impermanence of the peace, George II commissioned George Frederick Handel, another Hanoverian more happily and busily ensconced in London than was the sovereign, to compose music with
which to publicly celebrate it, specifying that the opus employ martial themes, allow for the prominence of wind instruments, and feature as few stringed instruments as possible, preferably none. The fiddle admittedly is not a warlike instrument, and George II, hero of the battle of Dettingen and the last British monarch to lead troops into battle, wished to stress that the peace owed much to England’s military prowess, even though he withdrew his army from the conflict four years earlier to combat the Jacobite menace at home.