Hunks Too Hot To Touch 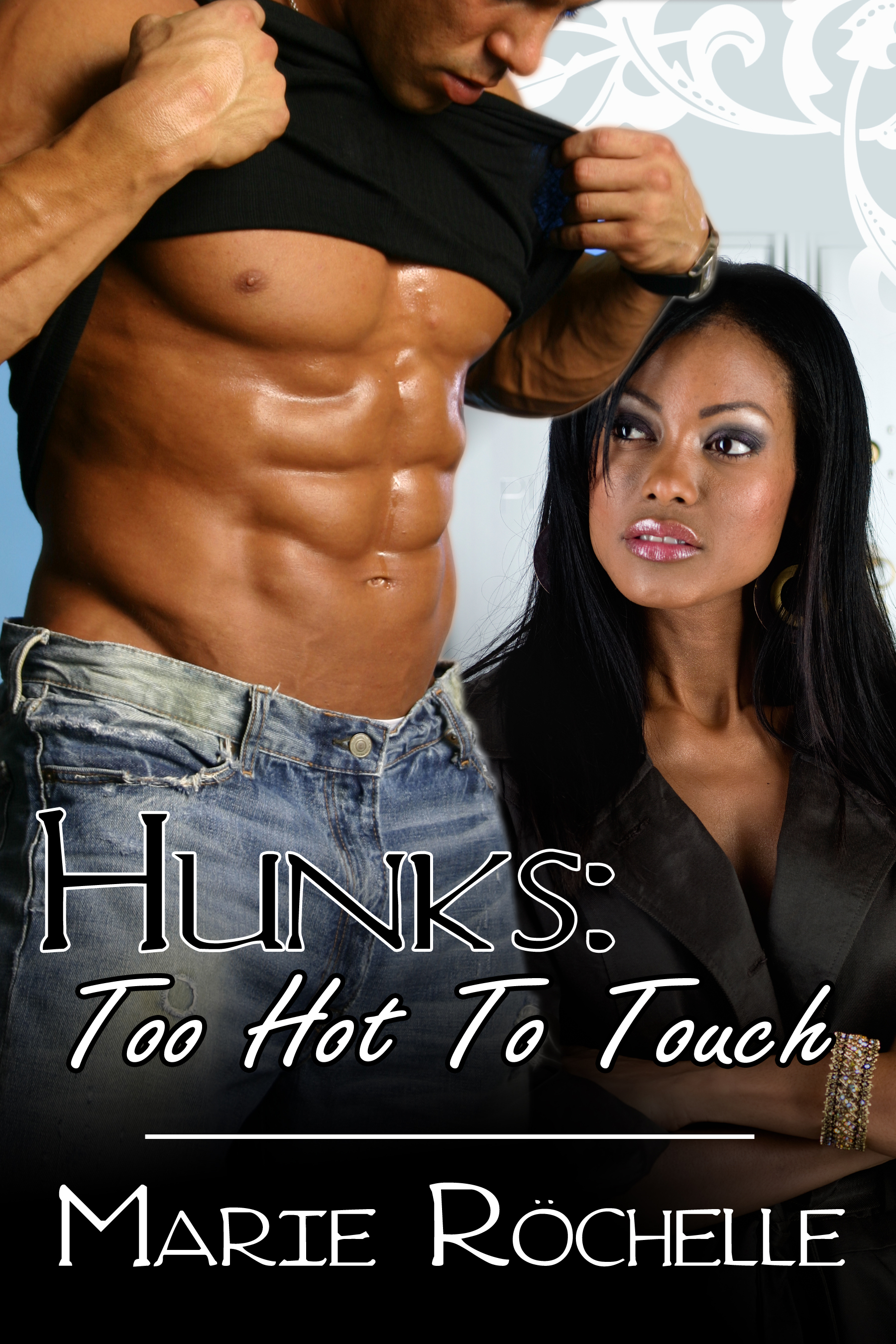 Hunks: Too Hot To Touch

A Taste of Love: Richard

Alpha Male Incorporated: Under Your Protection

The Men of CCD: Loving True

The Men of CCD: Tempting Turner

The Men of CCD: Slow Seduction

The Men of CCD: Help Wanted

Hunks: Too Hot To Touch

An imprint of Mundania Press LLC

All rights reserved under the International and Pan-American Copyright Conventions. No part of this book may be reproduced or transmitted in any form or by any means, electronic or mechanical including photocopying, recording, or by any information storage and retrieval system, without permission in writing from the publisher, Mundania Press LLC, 6457 Glenway Avenue, #109, Cincinnati, Ohio 45211, [email protected]

No part of this book may be scanned, uploaded or distributed via the Internet or any other means, electronic or print, without permission from Mundania Press LLC. Warning: The unauthorized reproduction or distribution of this copyrighted work is illegal. Criminal copyright infringement, including infringement without monetary gain, is investigated by the FBI and is punishable by up to 5 years in federal prison and a fine of $250,000. (http://www.fbi.gov/ipr/). Please purchase only authorized electronic or print editions and do not participate in or encourage the electronic piracy of copyrighted material. Your support of the author’s rights and livelihood is appreciated.

The true beauty of a woman is her ability to forgive.

“I can’t believe this is happening to me.” Shauntie Kane watched as the water dripped down from the ceiling onto her brand new mahogany kitchen table.

For over a month now, she’d known about the roof leak, but she’d put getting it fixed at the bottom of her list because of demands from her job as an optometrist. She didn’t think it would get this serious so rapidly. Unfortunately now, her procrastination had led to a huge puddle in the center of her table which was getting larger right before her eyes.

Good God! When would she have time to call a roofer to come and see about all of this? Her hectic work schedule was booked solid and this new situation only added to her tribulations. Why couldn’t this have occurred when she was on vacation? No, it had to arise right now, when she was having her busiest time at work.

Damn, she already had enough bills to pay this month and her lucrative job as an eye doctor didn’t make a bit of difference. She
hated
spending extra money. From a very young age, she’d watched as her mother saved money and only spent it when necessary. Her mother’s favorite saying was ‘save a penny for a rainy day.’ She didn’t believe in wasting money; however, her need to save money was the main reason her roof was in this condition.

Shauntie could only imagine the price the roofer would quote to fix the leaky roof. Without a doubt, it would probably cost an arm, leg and another one of her body parts thrown in for good measure.

She might actually have to take a part time job on the side to foot the bill, she thought jokingly.

Sighing, Shauntie took one last look at her increasing predicament before walking into the laundry room. Looking around the room, she searched for the small white bucket she’d placed there a few days ago. It wasn’t the best, but it would give the water something to collect in besides on top of her table.

Finally, she spotted the bucket beside the dryer. Shauntie picked it up then grabbed a towel out of the dirty clothes’ hamper before she left the room. Going back into the kitchen, she wiped up all of the excess water with the towel before placing the bucket directly under the steady drip.

There, that should take care of her problem for a while.

She went back into the laundry room and tossed the soaked towel into the washing machine. Tonight wasn’t turning out as she expected at all. She should already be out of the house and enjoying her usual Friday night cocktail with her friends.

Sapphire and Emerald were probably already at the nightclub having drinks and talking about their day while waiting on her to show up. Why was she constantly the one running late when her best friends invited her out? Lately something out of the blue always seemed to come up at the last minute to keep her late at work or home.

In the last two months, Shauntie knew she hadn’t arrived to the club on time for her girl’s night, and what was worse, she was the one who arranged the get togethers.

Tonight, she’d finally hoped to change her bad habits by getting dressed earlier, but her idea hadn’t work because here she was once again still at home trying to make it out of the front door.

Of course, Sapphire and Emerald weren’t going to let her hear the last of this since she’d practically gloated about how she was going to beat the two of them there tonight.

Damn! Why did she have to brag about something she knew might not happen? Shauntie hated losing at anything and especially at something trivial like this.

She could have been at the club twenty minutes ago and won the bet if she hadn’t needed to take care of this stupid leak. What person in their right mind wouldn’t have gotten it looked at after the first sign of trouble?

However, like always she thought things would wait until she had the time to fix them on her schedule and that was never the case. This incident had taught her a well deserved lesson.

Hurrying out of the laundry room, Shauntie grabbed her stuff off the kitchen island and rushed into the living room. She did a very quick tour through her house making sure everything was locked and secured before going out the front door. She hoped her friends hadn’t been waiting too long for her because Emerald would be the first one to speak up if they had. Shauntie pulled her dark blue BMW out of the driveway and headed down the street towards the nightclub where her friends were waiting. She couldn’t wait until she took a sip of her first drink.

After the long hours she worked this week along with the two eye surgeries she’d performed yesterday, Shauntie needed something sinful to release all of the tension from her body and since there wasn’t a hot, attractive guy in the picture to do it with sex, a good drink would have to suffice.

The thought of having a couple of drinks and a night out with her girls sounded like the perfect way to alleviate the strain that had taken control of her racing mind and tired body.

Shauntie couldn’t wait until she got to her destination because she wanted to flirt with some good-looking guys and have a good time with her friends. This wouldn’t be a problem with Sapphire or Emerald at her side since they constantly had some kind of wild and adventurous stories to help take her mind off her own pitiful dating life.

Her two best friends never seemed like they were ever lacking in the boyfriend department. She couldn’t recall the last time either Sapphire or Emerald didn’t have a date planned during the week or at least on the weekends.

Yes...it had been a while since a man had shared her bed or taken part of making her glad she was a woman. But did she really have to get excited this morning when an attractive guy struck up a conversation with her at the gas station while she was pumping gas.

How sad was she
? Sheesh. What would her friends say if they knew she was lonely from lack of male companionship? One thing was for sure, Sapphire and Emerald would never find out because she wasn’t about to tell them.

She didn’t want to get dragged into one of their dating schemes again. They were always trying to find her a man and all she wanted to do was relax and have a little fun tonight.

“Look who it is. I can’t believe my eyes. I thought you might be a hallucination until Emerald assured me you were the real thing, I’m glad that Dr. Kane finally decided to join us,” Sapphire Rhodes teased as soon as Shauntie took a seat at the circular table inside the nightclub. “I thought you were supposed to beat us here tonight.”

“You are just too funny. You need to take your act on the road.” Shauntie tossed her black purse down on the table. “I would have been here forty minutes ago if my roof didn’t start to leak again. You wouldn’t be picking on me if either of you saw the mess I had to deal with before I left the house.”

“Your roof is still leaking? I thought you had that problem taken care of last month,” Emerald Stone said as she reached for her drink. “You can’t let it go for much longer. It will only make it worse in the end and cost a lot more money to have it fixed properly. We all know how much you hate to spend your hard earned money.”

Why was Emerald giving her a lecture? She had more important things to take care of besides her roof problem. “I had two eye surgeries this month,” Shauntie said. “I wasn’t thinking about my roof. Anyways, I thought everything was fine because the leak had stopped until today.”

Jennifer Hudson’s song ‘
Where you at’
played around them as Sapphire and Emerald stared at her like she had completely lost her mind. Shauntie didn’t understand why they were looking at her as if she was speaking a foreign language.

Why were they acting like she was crazy? She just couldn’t cancel patients’ surgeries to deal with a household dilemma. Life didn’t work like that and both Sapphire and Emerald should understand where she was coming from.

“Are you serious, Shauntie? A leaky roof just doesn’t go away by itself. You need to call a licensed roofer for an inspection and get it repaired.” Sapphire waved a waitress over to their table. “Your problem will only get worse if you don’t.”

An African American waitress with multicolored braids piled up onto her head came up to them with pen and pad in her hand. Shauntie and Sapphire gave the waitress their alcohol orders and then waited until she walked away before they continued their conversation.

“Please don’t tell me you’re worried about the cost.” Emerald laughed. “You have your own private practice. How can you be concerned about money? You want your house in top condition which means you might have to pay a little extra to make it happen.”

Shauntie disliked when Emerald teased her about her need to hold on to money instead of spending thousands of dollars on every sale that came advertised in the newspaper. She was very surprised Emerald had any money at all with the way she burned through it on any given day.