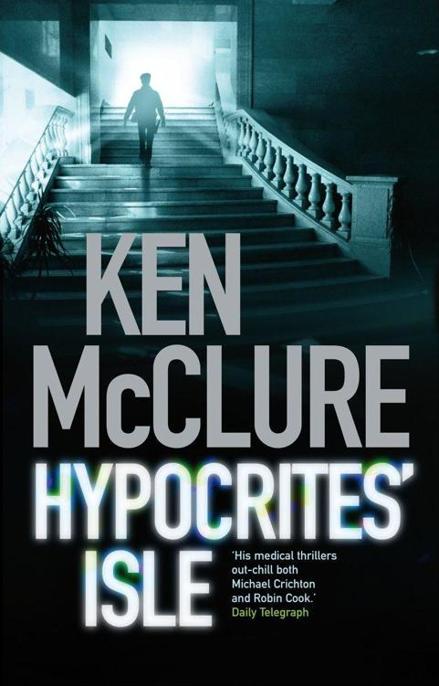 How Pantagruel gave no answer to the problems

Pantagruel then asked what sort of people dwelt in that damned island. They are, answered Xenomanes, all hypocrites, holy mountebanks, tumblers of beads, mumblers of ave-marias, spiritual comedians, sham saints, hermits, all of them poor rogues who, like the hermit of Lormont between Blaye and Bordeaux, live wholly on alms given them by passengers.

A ripple of polite applause gave way to the sound of shuffling feet on tiered, wooden flooring as the audience moved down to the exit doors on either side of the Lister Medical Lecture Theatre. The theatre was located in the oldest part of the hospital, with portraits of medical men of note in its two-hundred-year history gazing down from the walls – included among them the
eponymous
Joseph Lister, who had been a surgeon at the hospital and who had gone on to pioneer the use of antisepsis. None of them smiled, as befitted a profession not noted for taking itself anything less than seriously.

There were other, more modern lecture rooms in the hospital and adjacent medical school buildings – and all equipped with the latest in audio-visual equipment – but it was traditional that
visiting
lecturers be invited to use the Lister, and the idea of walking in the footsteps of the great proved seductive to most.

Dr Frank Simmons, a senior lecturer at the adjoining medical school with an international reputation in cancer research, had a lot on his mind. He chose to remain seated at the back until the majority had left, only getting to his feet to join his friend and colleague, Dr Jack Martin, when he saw him near the back of the exiting throng.

‘God, I’m getting old,’ murmured Simmons, who was actually in his early forties.

‘We all are,’ replied Martin, who was much the same age. ‘And mainly because that seminar went on for thirty-five years.’

‘Then it wasn’t my imagination?’

‘I think that guy was trying to prove the earth was flat,’ said Martin. ‘I’ve never seen so many meaningless graphs outside of an election night. Fancy some lunch?’

Simmons checked his watch. ‘I have to be back at the lab by two thirty – a sandwich maybe?’

The two men walked back to the medical school and took the lift up to the staff canteen where they waited in a short queue at the counter to pick up their food. They sat down at a table by a window where they could look out as ambulances came and went, visitors pursued their eternal search for parking places, and nurses and technicians moved to and fro in the choreography of hospital life.

‘What’s on your mind, Frank?’ asked Martin. ‘You look troubled.’

‘Do you realise how many hours we must have wasted over the years listening to waffle like that?’ said Simmons, before taking a serious bite of his baguette.

‘I suppose that’s one of those things in life it’s better not to know,’ smiled Martin.

‘There was this advert on TV last night – an appeal for funds for cancer research. They wanted people to give a few pounds per month. It was slick, professional, really well thought-out …’

‘They all are these days,’ said Martin. ‘They’re deliberately
designed
to make people feel as guilty as sin if they don’t put their hands in their pockets. Tugging at the heartstrings of the nation is big business. But don’t knock it; some of it is coming our way.’

‘But we both know how many thousands of people are
involved
in cancer research, how much money is tied up in it,’ said Simmons. ‘People live and die doing it. It’s become a profession in its own right …
Mary’s doing law and Justin’s going into cancer research
…’

‘I suppose it has to go on for as long as it takes,’ shrugged Martin.

‘I think it’s more what they’ll do with the money that’s
bothering
me,’ said Simmons. ‘They’ll take on more staff, buy more equipment and do more of the same.’

Martin looked puzzled. ‘And your point?’

‘It’s not staff and equipment that’s missing from the equation. It’s ideas, new ideas … the things you can’t buy.’

Martin took a sip of his coffee. ‘Aren’t you being a bit unfair?’

‘I don’t think so. It’s time we faced facts. The public are being conned into thinking that the thing holding up a cure for cancer is a lack of funds. Not so. Jack Kennedy threw money at the problem back in the sixties, millions of dollars, and all they got out of it was a whole lot of institutes full of people in white coats – all of them still working today.’

‘Come on, there’s some good stuff going on.’

‘Sure, but the amount of repetitive crap that’s being carried out … and the Mickey Mouse science that shelters under the umbrella of cancer research – like the stuff we’ve just been listening to – that’s another matter.’

‘I didn’t notice you leaping to your feet and telling our friend in the Lister that his work was going nowhere,’ countered Martin, sensing accusation in Simmons’ echo.

‘You’re right … you’re right,’ conceded Simmons. ‘We sat there, knowing it was rubbish, but we listened to our head of department thanking him for coming along and telling us about his
exciting
work and we all clapped like a bunch of seals …’

‘Cheer up, Frank, the seminar wasn’t that bad. No, I take that back; it was, but there’s no reason for you to feel personally responsible for the slowness of cancer research. A journey of ten thousand miles and all that. You’re doing your best; I’m doing my best …’

‘I suppose,’ conceded Simmons with a sigh. He looked at his watch and got to his feet. ‘I’ll have to go. I’ve got a meeting with my PhD students.’

‘How are they doing?’

‘No worries with Mary Hollis – she’s been fine from the word go. She should be able to publish her latest findings soon – her third publication. Tom Baxter’s fine too. He had a slow start but he’s doing all right – a bit of a plodder but he gets there in the end. It’s Gavin Donnelly, the new one, I’m not so sure about. He’s either a genius or an idiot and I’m not sure which.’

‘Could be every group leader’s nightmare,’ joked Martin. ‘A student brighter than his supervisor. Only one way to cope with that: steal his results and run. But remember to acknowledge his contribution in your acceptance speech at the Swedish Academy.’

Simmons smiled. ‘It’s actually the alternative I’m worried about – that he’s an idiot who slipped through the net and got an honours degree for good attendance.’

‘Well, they do say everything’s being dumbed down these days. Where did he do his degree?’

‘So he should be able to spell his name and do the four times table. What have you got him working on?’

Simmons entered the small meeting room adjoining the main lab and apologised for being a few minutes late, using the seminar in the Lister as his excuse. ‘Didn’t see any of you folks there.’

Mary Hollis, a thoughtful-looking girl in her early twenties with ash-blonde hair tied back with a lilac ribbon, was pouring coffee. She smiled and said with a gentle accent that gave away her Dublin origins, ‘Sorry, I’ve got an experiment running. I have to take
samples
every twenty minutes. Coffee?’

‘Dentist,’ explained Tom Baxter. ‘Root canal treatment.’ He gave a crooked smile which seemed to match just about everything else in his appearance. He was well over six foot tall, lanky, with
narrow
shoulders that never seemed to be quite horizontal. He wore a checked shirt and jeans – standard student wear – and sat slumped in one of the six chairs in the room with one long leg crossed over the other. A clipboard rested on his raised knee while he tapped the end of a biro pen against his teeth.

Simmons noticed – as he had many times before – that Tom’s glasses tended to slope at the opposite angle to his shoulders. He turned to look at the third member of the group, Gavin Donnelly, who seemed to be avoiding his gaze. ‘What about you, Gavin?’

Donnelly, a good head shorter than Tom but with a much more athletic build and a shock of long red hair, looked up and replied in a thick Liverpudlian accent, ‘I went for a walk.’

Simmons gave him a moment to elaborate, but nothing was forthcoming so he said, ‘You do realise that attendance at
departmental
seminars is expected for all first-year postgraduate students?’

‘I hate seminars, Frank. Times have changed. We have the internet now.’

Simmons saw Mary and Tom exchange uncomfortable glances and felt slightly embarrassed himself, but he kept his cool. ‘Indeed, Gavin, and it’s a valuable tool,’ he agreed. ‘But reading articles on the net is no substitute for being able to question scientists about their work and listen to their response to informed criticism.’

‘That’s the theory but it doesn’t work out like that, does it?’

‘Universities have seminars for the sake of having seminars. Academics like the sound of their own voices. Half the speakers I listened to last year had very little to say at all – and did so at great length. Anything worthwhile had already been published.’

‘Oh, come on, Gavin,’ smiled Mary. ‘Play the game. Go to seminars, collect your brownie points and stop being such a pain.’

‘I just think it shouldn’t have to be that way,’ insisted Gavin.

‘But it is,’ said Mary, leaning towards him and lecturing him kindly, as if he were a younger brother. ‘Accept it and get on with your life.’

Simmons, who had seen a lot of students from poorer
backgrounds
come and go and was all too familiar with the rebel
without
a cause, smiled and held up his hands. ‘Enough, guys,’ he said. ‘Gavin is obviously a man of principle and should be respected for that, but Mary has been kind enough to offer some sound advice.’ He turned towards Gavin. ‘Maybe he should at least consider it. Let’s leave it at that and now you can all tell me what you’ve been doing for the past week.’

‘You didn’t say what the seminar was like,’ said Mary as she handed Simmons his coffee and took up stance by the blackboard. ‘Gerald Montague, wasn’t it?’

Simmons thought he detected a hint of mischief in her enquiry. ‘It wasn’t very exciting,’ he replied. ‘Unusual approach but perhaps somewhat … flawed.’

Ratchet Bitches 2 by Tiece
The Strange Tale of the Snake Ring by John Holroyd
On the Ropes by Holley Trent
The Critics Say...: 57 Theater Reviewers in New York and Beyond Discuss Their Craft and Its Future by Matt Windman
Vineyard Shadows by Philip R. Craig
Vanishing Act by Liz Johnson
Deep Fried Homicide (The Donut Shop Mysteries) by Jessica Beck
Close Encounter by Deanna Lee
The Arch Conjuror of England by Parry, Glyn
Gravediggers by Christopher Krovatin
Our partner