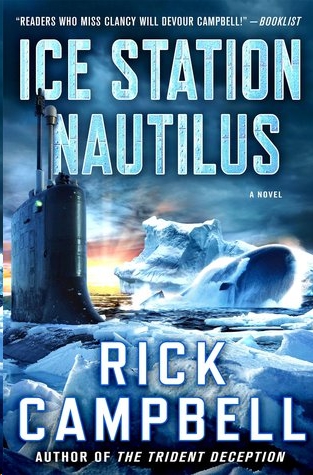 To Lynne—our thirty-year journey together has been amazing. I couldn’t have chosen a better partner.

Many thanks are due to those who helped me write and publish this novel:

First and foremost, to my editor, Keith Kahla, for his exceptional insight and recommendations to make
Ice Station Nautilus
better. To others at St. Martin’s Press—Hannah Braaten, Justin Velella, and Paul Hochman, who I relied upon in many ways as
Ice Station Nautilus
progressed toward publication. And finally, thanks again to Sally Richardson and George Witte for making this book possible.

To those who helped me get the details in
Ice Station Nautilus
right: to Navy Captain Tom Monroe, former Commanding Officer of PMS 391, Escape and Rescue Program Office, along with his deputy, Dave Wunder, who walked me through the submarine search and rescue process. To Commander Andrew Kimsey and Lieutenant Commander Jonathon Gibbs, Commanding Officer and Engineer Officer of the Undersea Rescue Command, who showed me the submarine rescue equipment and explained its operation.

To Director Larry Estrada and ice pilot Howard Reese at the Arctic Submarine Laboratory, for walking me through Arctic ice camp operations and the unique differences in submarine operations while in the Marginal Ice Zone and under the polar ice cap.

To Lieutenant Commander Stephen and Nicole Hunt, for helping translate legacy submarine operations into how Virginia class submarines operate, as well as explaining the hardware differences between Virginia class and older submarines.

And finally, to the men and women who have served in our armed services. My heart and thoughts will always be with you.

(COMPLETE CAST OF CHARACTERS IS PROVIDED IN ADDENDUM)

“Torpedo in the water, bearing two-five-zero!”

The Helm rang up ahead flank and twisted his yoke to right full, and the Officer of the Deck launched one of
Michigan
’s decoys. Wilson turned his attention to getting a torpedo into the water. His crew was still at Firing Point Procedures, but his Executive Officer hadn’t determined an adequate target solution. With
Michigan
increasing to ahead flank, they would likely lose Sierra eight-five due to the turbulent flow of water across
Michigan
’s sensors. They needed to launch a torpedo soon.

Wilson stepped from the Conn and stopped beside his Executive Officer, examining all three consoles. With the frequent maneuvering by both submarines, the target solutions were all over the place, failing to converge on a similar course, speed, and range. As Wilson evaluated his options, he was interrupted by another announcement by the Sonar Supervisor.

“Torpedo in the water, bearing two-four-five!”

A purple bearing line appeared on the geographic display. Their adversary had launched a second torpedo. Wilson responded immediately.

Wilson canceled their normal torpedo firing process, implementing a more urgent version that forced his Executive Officer to send his best solution to the torpedo immediately.

Lieutenant Commander Sparks shifted his gaze between the three consoles, then tapped one of the fire control technicians on the shoulder. “Promote to Master.”

“Ship ready,” the Officer of the Deck reported.

Wilson listened to the whirr of the submarine’s ejection pump impulsing the torpedo from the tube. Inside the sonar shack, the sonar techs monitored the status of their outgoing weapon.

“Own ship’s unit is in the water, running normally.”

Michigan
’s torpedo was headed toward its target.

Wilson examined the red and purple lines on the geographic display, with new lines appearing every ten seconds. The red torpedo bearings were marching slowly forward, which eased Wilson’s concern until he evaluated the purple lines. The bearing to the second torpedo remained constant. The Russian captain had fired a torpedo salvo, with a
lead
torpedo fired slightly ahead of
Michigan
and a
lag
torpedo fired behind. When Wilson turned away, he had unwittingly put
Michigan
on an intercept course with the second torpedo.

Michigan
turned toward the east as the Officer of the Deck launched another torpedo decoy. Wilson watched intently as the second torpedo closed on
Michigan
.

Andy Wheeler, seated at his desk inside the Atlantic Submarine Fleet’s headquarters, worked his way down the inbox on his computer display. He took a sip of his morning coffee as he clicked through the emails, stopping to review the daily Naval intelligence report. In addition to the standard information, it contained something unexpected. Russia’s new Borei class ballistic missile submarine was preparing for its first patrol.

He placed the coffee mug on his desk and opened the attachment of time-lapsed satellite photographs. A moment later, he called Commander Joe Ruscigno, seated at his desk at the back of the room.

“Look at these photos,” Wheeler said as Ruscigno stopped behind him.

“It’s about time,” Ruscigno said. “She’s been delayed for years.”

“We’ll need to assign someone to shadow
Dolgoruky
during her patrol,” Wheeler said. “Is
Annapolis
still on the northern run?”

“No, she just got relieved by
North Dakota
.”

“Perfect. I’ll draft a message while you brief the Admiral.”

Wheeler pulled up the message template and entered the pertinent data.
Yury Dolgoruky
was about to embark on her maiden patrol.

El Universo holográfico by Michael Talbot
The Angry Woman Suite by Lee Fullbright
Before We Fall by Courtney Cole
1491 by Mann, Charles C., Johnson, Peter (nrt)
Anything for Him by Taylor, Susie
The Nerd Who Loved Me by Liz Talley
Full Tilt by Neal Shusterman
Fight or Fall by Anne Leigh
Pyramids and Promises (Omega Mu Alpha Brothers Book 2) by Loth, Kimberly
Wedding Belles by Sarah Webb
Our partner