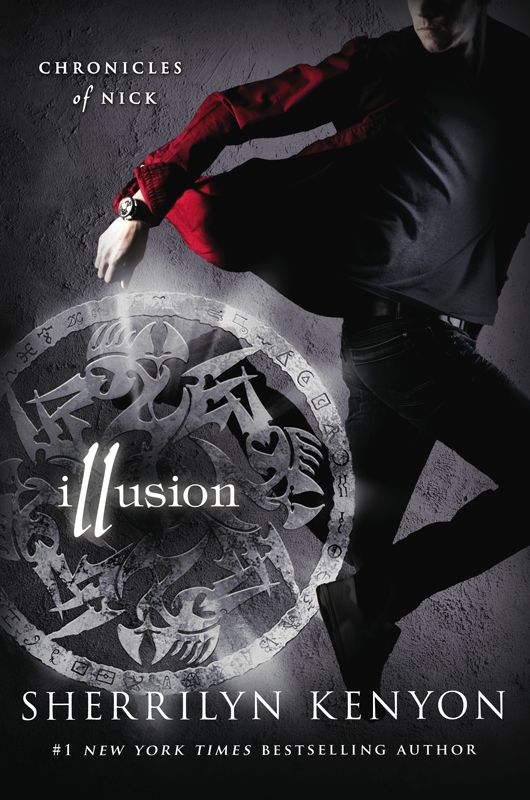 In loving memory of the real Michael Tyler Burdette. I will always miss my precious little Bubba, and you will forever hold a special place in my heart.

As always, to my friends and family who keep me semi-sane, and who put up with my absentmindedness and long absences while I work. To my friends and family, who are spiritual warriors and who fight the good fight for all of us every day against the evil that could harm us. To my editor and the SMP team who put so much into every title—you guys really are the best ever! And last, but never least, to you, the reader, for taking another journey with me into a realm beyond the normal. Love you all!

“Nick? Honey? You’re not really asleep, are you?”

Nick blinked his eyes open as some loud, thumping song he didn’t know made his ears ring. In fact, he was surrounded by all kinds of noise. Like a party.

He lifted his head from his folded arms to find himself not in the bed he’d fallen into, but at a …

Yeah, it was a fancy prom with hideous swan and star cardboard cutouts, and enough pink fabric to make him feel like he’d fallen into a Pepto-Bismol factory.

Scowling, he scanned the darkened hotel ballroom where his classmates were partying hard to some flashy DJ on a raised dais.

How had he gotten here?

When
had he come to this?

Wait, forget all of that for a minute. It’d been late fall when he’d gone to bed.…

How had he lost six months of his life? When had he lost them? But what floored him most were the people sitting at the round table with him. Caleb was to his right, but instead of the pretty-boy jock he was supposed to be, Caleb was a bit heavyset and wore a retainer.

Retainer? Was it a costume party of some kind? After all, it was New Orleans—the only place in the world where they could turn opening a regular envelope into a grand procession. Yeah, that made more sense of what he was seeing.

Especially the usually flamboyant Simi, who was currently wearing an understated pink frilly dress down to her ankles with a sweater buttoned up to her chin. He frowned as he followed the line of her arm to where she held Caleb’s hand.

Yeah, I’m insane and the devil’s cracking icicles in his hot tub. My dad must have sucked out my brains when he died. Or maybe this is Caleb’s idea of a joke?
The demon did have a sick sense of humor at times.

Please, let me
just
be crazy.
The sheer magnitude of possible and awful paranormal alternatives made a straightjacket seem like the most desirable outcome.

Casey sat beside Nick, wearing a pair of thick glasses and an outdated dress that looked like something from a 1980s John Hughes movie.

Is this a dream?

It was too real for that, and yet …

“Nick, you’re looking kind of sick. Like you’re about to hurl. Are you okay?” Casey rubbed his hand.

No. He was definitely
not
okay. He felt like someone had just sucker-punched him as his gaze locked on a short, stubby … geek whose eyes and dark hair were all too familiar.

He beamed. “Yeah, buddy. Should I call your dad to come get you? You don’t look like you should be driving.”

Nick went cold at a voice he didn’t want to recognize. No, no, no. There was no way
he
was here. Why would an eleven-thousand-year-old all-powerful immortal come to a high school prom?

Not like the being would be bored, given all the things out to end them.

But like a grisly car wreck—Nick had to. His stomach tight, he was terrified of where his nightmare would take him this time.

The moment he turned, he knew he’d died and gone to the real hell. That was the only plausible explanation he could wrap his head around. The only explanation that made sense.

This was the freakfest of all time.

It was definitely Acheron Parthenopaeus. All five feet tall of him, with short brown hair and blue eyes.

And in a pink tux.

Nick laughed at something that was a lot scarier than it was funny. But he didn’t know what else to do … except scream, and that might get him put in a straightjacket for real.

Maybe I have lost my mind.

Yeah, that was a little more acceptable than this current nightmare.

He swallowed hard then returned his attention to Stone. “Can I ask a weird question?”

Raking his hand through his hair, Nick tried to figure out why he was having this screwed-up dream. What had he eaten?

Or better yet, had something finally
eaten
him?

But for now, until he unraveled what was happening, he had no choice except to ride this … horror out to its conclusion.

Yeah, so not funny. Nick forced himself not to insult them for their ridicule. “C’mon, guys. Just play along and answer the question.”

Ash snorted, then answered in a nasal tone. “You know your dad, Nick. Michael Burdette. He’s an accountant who works with Caleb’s father.”

Caleb had a dad, too?

Sure, and fat flying fairies made Nick’s tacky clothes every night and left them for him in the bathroom.

Nick arched a brow at Caleb. “And your father would be…?”

Caleb scowled at him. “What is your problem, boy? You know my dad is your dad’s best friend and has been since forever. Caleb
Fingerman
? Hello? Mark’s my dad.”

Nick started laughing and laughing. He couldn’t stop. Yeah, this was all insane. He must have been hit in the head a lot harder than he thought. “Okay, joke’s over, everyone. Ha. Ha. You got me.”

“What joke?” Ash, Caleb, and Stone asked while the women looked at him as if
he
was the one who was nuts.

Unable to deal with it anymore, Nick rose to his feet and curled his lip. “You know, for a joke to work it actually needs to be funny, guys … and this is not even a little.” Angry at them, he stormed off to the bathroom to splash water on his face and wake up.

Something had to get him out of this nightmare and back home.

But the moment Nick looked into the bathroom mirror, he froze in absolute horror. Not only was he in an ugly blue tuxedo that he’d
never
wear, his hair was blond, and his eyes were an average gray color.

Worse? He was a lot closer to the sink than he’d been in a really long time.

Ah gah! Anything but that!

His heart pounding, he checked his legs to make sure they were intact.

And yet he was only five foot eight. If that much.

I’m six-four
. Had been since his growth spurt last summer. Panic rose high as he closed his eyes and tried to summon his powers.

That only made him panic more as harsh reality cracked him in the stones.
No, no, no, non!
his mind shouted. It couldn’t be.

But it was.
All
of his powers were gone. Every last one of them. He had nothing. Not even a glimmer of the scrying or clairvoyance or anything.

I’m totally without and locked in Hades.

Horrified, Nick gaped at the unfamiliar face he saw in the mirror that wasn’t his. He pinched himself and shook his head. It
was
him. Somehow he’d morphed into a short blond dude.

Unable to accept it, he tried everything he could to wake up. But nothing worked. He continued to exist here in this freakworld.

It’s not a dream.

Somehow
this
was real. He was real, and he was here, wherever
here
was.

Madaug walked in and sneered at him. No longer skinny and nerdy, he was the six feet four Nick should have been, and ripped. “What you looking at, Burdette? Cruising for a date?”

Madaug shoved him. “Nick Burdette? Can’t you even recognize your own name?” He rolled his eyes. “Dog, boy, how dumb are you?” He went over to a urinal.

Stunned, confused, and terrified, Nick stumbled out to the prom that was filled with people he knew but didn’t recognize. Reaching for something, anything to prove this wasn’t happening, that he was being punk’d, he pulled his wallet out and checked his license.

It was the “new” blond him in the photo, but what hit him like a kick in the crotch was the name.

“What the Hades has happened?”

And more importantly … how could he undo it when he no longer had any power and his preternatural allies were now all woefully normal?

Groaning in fear of what he might find this time, Nick opened his eyes to see the navy blue curtains his mom had bought him last year when they moved into their condo on Bourbon Street. Relief flooded him.

It was just a nightmare, after all. Thank you, God!

That was his thought until he realized that the window wasn’t the same. Instead of being a large single window, it was two windows with a divider between them.

His heart hammering, Nick slowly swept his gaze around a room he didn’t recognize.

His stomach tightened to the point he feared he’d be ill.

“Nick?” His mom knocked lightly before she pushed open the door to smile at him. “So you are up, sleepyhead. Hurry now, or else you’ll get another tardy.”

Even more unsettled than before, Nick gaped at the sight of her in an expensive dark blue business suit with her blond hair cut short to frame her beautiful face. That definitely wasn’t her waitress uniform.

Scowling, she moved to stand by the bed and placed her hand to his forehead. “Are you all right? You look pale.”

Stunned, he couldn’t speak as he stared at a stranger in his mother’s body.

“Cherise? It’s London calling. They need to speak to you. Said it can’t wait.”

His eyes widened at the sound of that familiar deep, thick Tennessee Southern drawl. Bubba? What the heck was Bubba doing in his house at seven thirty in the morning? It’d been bad enough when Nick had come home from the prom and found him here. But that he’d attributed to a date.

Hick by Andrea Portes
Hanging by a Thread by Karen Templeton
Work Experience (Schooled in Magic Book 4) by Christopher Nuttall
Wrestling With Desire by D.H. Starr
REMEMBER US: A Billionaire Romance (Part Two) by Glenna Sinclair
Be My Lover by Cecily French
Two Penn'orth of Sky by Katie Flynn
The Restoration Game by MacLeod, Ken
Playing on the Edge: Sadomasochism, Risk, and Intimacy by Staci Newmahr
Drunk and Disorderly (Love in the City Short) by Morris, Liv
Our partner