Read I'm the One That I Want Online

Once you start, you will never go back. Like Gloria Steinem says, “We need nothing short of a revolution.” Join the ranks. Aunt Sam wants you!

Accepting myself was like getting to know a new friend. It was amazing to buy clothes that fit me instead of ones that “will fit me in a couple of months provided I stay on my diet.” I had beautiful, stylish things that I could wear anytime, instead of ratty, everyday, pilled, faded, Lycra leggings and sweats, the only things that fit me from a closet filled with expensive pants that were so small that I couldn’t get them over my knees. I gave away as many of those unworn dreams as I could, hanging on to some pieces just in case I had kids. I made room for my brand-new life.

Trading in my emotional baggage for a slim suitcase filled with new clothes, I moved to New York and started a run of my show.

I opened
I’m the One That I Want
at the Westbeth Theatre Center in New York in June 1999. The house was packed every night, right from the beginning, and the press schedule, along with getting used to doing so many shows every week, made it an exhilarating ride.

I remember being interviewed on a morning news show and discussing weight issues. The anchorwoman exclaimed, “That’s ridiculous! You’re not
that
overweight.” I snapped back, “I’m not overweight at all! Your attitude is the problem.” She ignored my comment and went on with the interview, but when I watched it on tape, they had cut that part out.

People are stupid and will say what they will say. It’s not just weight, either. It’s everything. The challenge is learning not to give them the power to dictate how I will feel about myself. Learning how to love myself from within, to make my opinion count the most, knowing that no one and nothing is going to save me except myself— these are the lessons I have been forced to learn. That is what my life now is all about. That is why I have written this book.

I met people over the entire summer who told me they loved the show. So many women who also worked in the entertainment field said they had gone through similar experiences, and hadn’t had the courage to talk about it. They thanked me for my honesty and strength.

The gay men of the West Village were so kind to me. One guy sent me a basket filled with Vidal Sassoon hair care products, and it was really beautiful, but then I opened it up and it was all for dry, damaged hair. Thanks, bitch.

I danced on a float for the Pride Parade, and got carried all over the place by shirtless young men.

Finally, for the first time in so many years, I felt good. I was happy. I am happy.

He is as tall as me!

We go everywhere together. People talk to you a lot more when you have a dog. I was walking him one night and this homeless guy jumped out and said, “That dog gonna wind up in a pot of rice!”

And he probably wouldn’t have said that if I was by myself.

WHAT IT’S ALL ABOUT

I’m the One That I Want
had such a successful stage run in New York that I was able to launch a forty-city tour. Every performance was sold out, and I made a feature film of it at the Warfield in San Francisco.

I premiered my film at the Honolulu Gay and Lesbian Film Festival. The audience was terrific, and they gave the film a standing ovation. It was thrilling, yet I was completely self-conscious. The film was a labor of love, and I am as proud of it as I am of my stage show, but seeing myself up on the big screen still takes some getting used to.

There was a brief Q-and-A afterward, which was not too painful, except when one man asked me if I still gave good head. I explained that even though I did not give as much head, it was still good, as I felt it was a matter of quality over quantity.

At the reception afterward, I spoke to a young Japanese man I had met a few months earlier during my run at the Diamondhead Theatre in Honolulu. He brought pictures of us together with his lover Tim, who had since died of AIDS. I remembered meeting them at Hula’s on that trip, where I was making a special appearance. Tim had looked so frail and thin, it did not surprise me that he had passed away.

This couple had made a strong impression on me—they were not like the rest of the rowdy, party crowd that usually hangs at Hula’s, Honolulu’s most fabulous gay hangout. Yutaka, the Japanese man, had presented me with a beautiful ribbon lei, and Tim had laughed about how he had spent the afternoon furiously sewing it in time to give it to me. I hugged them both, we took lots of pictures, and we all left at the same time. Walking out to the car, Tim told me how much he loved my work, especially the film
It’s My Party
. They got into their Honda Civic, which was parked in the handicapped space, and waved to me as they drove away. Watching them, I was moved by the great effort they had obviously made to come see me that night. I took the ribbon lei home and placed it on my altar. Dedicated to love, the artifacts collected in this shrine are reminders that I am loved and loving.

The night of the premiere, Yutaka had me sign his pictures of the three of us “To Tim and Yutaka.” He put a letter in my hand, bowed, and left.

I got back to my room and read the letter. Yutaka wrote that when he met Tim, he had been very afraid of AIDS and didn’t understand anything about it beyond that fear. Still, he was so in love with Tim, he decided to move to Hawaii to be with him. They had a difficult five years together because of the complications from Tim’s illness, and because of Tim’s mother. Already upset that Tim was gay, she was even more unhappy that he had chosen to be with a Japanese man.

Tim told Yutaka that he was a fan of mine, and that I did a lot of work to help gays and people living with AIDS.

Tim’s health grew worse, and he kept his spirits high by listening to my CD on the way to the hospital. He especially liked Track Six,
Racism Affects Me in a Really Stupid Way . . .

I felt so honored by that. Whatever successes I have had, that is the single one that I am most proud of. He listened to me on the way to the hospital, and it made him feel better. My heart wants to burst out of my chest at the thought of it, the idea of the unseen strands of love that connect us all to each other. Our ability to help someone when we are not even aware of it. I just want to live in the helping, to devote my life to it.

Yutaka wrote that Tim was thrilled about meeting me at Hula’s and that even though he coughed a lot during my show, it was still one of the highlights of his life. He was so glad that he was able to do that before he died.

He said he couldn’t yet accept Tim’s death, and that he still expected to go the hospital and see him, smiling the lover’s smile at him. The city was filled with memories for him, of all the things he and Tim did together.

Even though he was still learning English, Yutaka wanted to write a screenplay about his life with Tim. He wrote that if one audience member agreed with and understood his story, then “That’s enough successful our meaning of life.”

He ended the letter with a poem to Tim:

I think about Yutaka and Tim all the time. That I have touched their lives with my work makes me feel like “That’s enough successful our meaning of life.” There is joy inside the deepest sadness, and that is what life is all about for me. 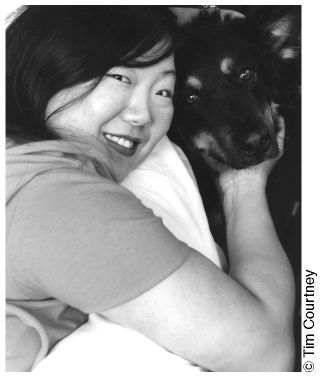 MARGARET CHO was born and raised in San Francisco. She currently lives in Los Angeles with her dog, Ralph. In 1999, Margaret’s one-woman show, “I’m the One That I Want,” received
New York
magazine’s Performance of the Year Award, a MAC Award, and was named Great Performance of the Year by
Entertainment Weekly
. In 2000, the self-produced and self-distributed movie of the same name garnered its own impressive reviews and accolades. She is also the recipient of the first ever GLAAD Golden Gate Award, honoring her as “an entertainment pioneer who has made a significant difference in promoting equal rights for all.”

While all of the incidents in this book are true, some of the names and personal characteristics of the individuals involved have been changed in order to protect their privacy. Any resemblance to persons living or dead is entirely coincidental and unintentional.

A Ballantine Book
Published by The Random House Publishing Group

Cuentos completos by Mario Benedetti
The Siren Series 3: Brandon (A Siren Novel) by Eros, Marata
The Moche Warrior by Lyn Hamilton
Birds of Prey by Wilbur Smith
Covered, Part Three by Mina Holt, Jaden Wilkes
Inherited by Her Enemy by Sara Craven
Glitter Girl by Toni Runkle
Honour by Jack Ludlow
Save the Last Dance by Fiona Harper
Owning Up: The Trilogy by George Melly
Our partner