The interior of Gabby’s bedroom was the colour of pink roses. E.D. felt sick at the sight of it. ‘Why are we here again?’ He shifted uncomfortably from foot to foot, not willing to sit down on any of the fuchsia-coloured chairs in the room.

Gabby grabbed his shoulders and steered him onto the couch. ‘Just sit down and watch this,’ she said, flicking on the TV. ‘And eat these.’ She handed him a bowl of cabana sticks.

‘Gabriella?’ called Gabby’s mum from outside the room. ‘Telephone for you.’

‘Thanks, Mum.’ Gabby opened the door and took the phone. ‘Hello? Andrea? How are you?’

‘I wish she’d put it on loudspeaker,’ muttered Hannah to Angus. He smiled.

‘Okay,’ said Gabby. ‘Keep in touch.’ She pushed the end button. ‘That was Andrea.’

‘We know that,’ said Hannah impatiently. ‘What did she say?’

‘She’s moving and she just wanted to say goodbye. Apparently her mum’s got a new job.’

‘And what about her uncle?’ Angus asked.

‘The police are dealing with him. Dave’s pills were pretty strong evidence against him.’ She glanced at the TV in the corner of her room. ‘Oh! This is what I got you all here to watch.’ Gabby grabbed the remote and turned the volume up.

‘But how come we didn’t know?’ Hannah burst out, turning to Gabby.

‘She asked me to keep it a secret,’ Gabby replied.

‘So she was a state
Whatever, Wherever
finalist all along too?’ Hannah grinned. ‘Wow!’

‘Remember she lives in Sydney. She was the state finalist for New South Wales.’

‘Thank you for joining us, viewers at home. Welcome to the Australian final of the inaugural
Whatever, Wherever
competition!’

‘Oh, no,’ said E.D., stuffing another bit of cabana in his mouth. ‘It’s that Shifty Rifty bloke.’

‘…without delay, let’s get started!’ Glitzy Ritzy spun a smile at the camera. ‘We are one contestant short with the sudden withdrawal of a state representative, but the action will still be nonstop. Now. Question number one…’

From the start, it was obvious that Ling was one of the best. After a while, even E.D. stopped eating and just stared at the television. No one in the room spoke. At the halfway point, Ling was behind the leader by fifty points.

‘She is so smart,’ said Angus softly to no one in particular during a commercial break.

Hannah looked at him. Angus grinned at her. ‘You are too, you know. You should be on TV as well.’

By the general knowledge section, Ling was level with the boy from the Northern Territory. Glitzy Ritzy spat questions at them like gunfire.

‘The Amazon River flows through which two countries?’

‘What does the surname Cooper mean?’

‘In what year did America first send men to the moon?’

The boy from the Northern Territory started to sweat. His face glowed red under the studio lights. Ling looked calm. She hit her buzzer firmly and her score crept ahead.

Glitzy Ritzy paused. ‘And our last question…What is the collective noun for a group of crows?’

‘What?’ said E.D., jumping up and spilling cabana sticks over the carpet.

‘A group of crows is a murder!’ Hannah danced around the room. ‘And she got it!’

The applause in the studio finally died down as Glitzy Ritzy led Ling to the front of the stage.

‘Now, Ling, you can’t tell us that you haven’t
been thinking about a place you’d like to go?’ he asked, grinning and winking at the audience.

‘Well, if I don’t go far, can I take some friends with me?’ Ling asked.

‘Ssshh!’ the others cried.

‘It’s by the sea, which I love. It’s beautiful, windswept and mysterious. And it’s haunted…’

Dawn Fraser was born in Sydney on 4 September 1937. Perhaps her most famous swimming achievement was to win gold medals in three consecutive Olympic Games for the 100 metre freestyle event – Melbourne in 1956, Rome in 1960 and Tokyo in 1964. She was nearly twice as old as the swimmer who came second in the 1964 race (Dawn was twenty-seven). She was the first swimmer to break the one-minute mark for the 100 metre freestyle. Dawn suffered from asthma as a child, but with commitment, hard work and talent overcame this to become an Australian legend of swimming.

Ian Thorpe was born in Sydney on 13 October 1982. Also known as ‘Thorpedo’ or ‘Flipper’, Ian is one of the most naturally talented swimmers of all time. Having size 17 feet and an arm span of 195 centimetres (that’s almost two metres) helps. When he first started to swim as an eight year old, he was allergic to chlorine. At the age of fourteen he was the youngest male swimmer ever to represent Australia, and, at fifteen, he was the youngest swimmer to become a world champion. In 2003, Ian became the first swimmer in history to win three consecutive world titles in the one event, the 400 metres freestyle.

Ian won five gold medals in two Olympic Games, won eleven gold at three World Championships, and won ten Commonwealth Games gold medals, as well as being voted Young Australian of the Year in 2000. He announced his retirement from competitive swimming in November 2006.

Eric Moussambani, from Equatorial Guinea, recorded the slowest-ever time for an Olympic 100 metre event – yet managed to win his heat! He’d only learnt to swim nine months before the 2000 Sydney Olympics. He had done all his training in rivers, had never seen an Olympic-size pool and had never swum more than 100 metres in one go. But he lined up for the final heat of the 100 metres freestyle, swimming the heat alone after his two fellow competitors were disqualified for false starts. By the end of the race he was receiving a standing ovation from the supportive crowd. His time of 1 minute, 52.72 seconds is about a minute slower than the very fast 100 metre swimmers.

How fast are you? What’s your time over 100 metres doing freestyle? Can you beat Eric?

The fastest time for swimming 50 metres in a 25 metre pool is 21.10 seconds. This was achieved by the Frenchman Fred Bousquet at New York on 25 March 2004. This is a speed of just over 8 kilometres per hour.

The fastest female time was set in Athens on 18 March 2000. Therese Alshammer, of Sweden, achieved a time of 23.59 seconds.

The fastest time for a male swimming 1500 metres is 14 minutes, 34.56 seconds. Grant Hackett of Australia swam this time at Fukuoka,
Japan on 29 July 2001. This is a speed of just over 6 kilometres per hour.

In ancient times people used inflated pigs’ bladders to keep them afloat if they were trying to cross a river.

Because there are eight lanes in an Olympic-size pool, the fastest eight swimmers in the qualifying heats qualify for the final. Swimmers are allocated a lane depending on their heat times:

The fastest fish is a tricky thing to work out, but most people believe it is the Indo-Pacific Sailfish. It has been clocked at over 110 kilometres per hour. It would take this fish about 1.6 seconds to complete one lap of a 50 metre pool. If it had the stamina, it could nail the 1500 metre event in about 50 seconds.

Here are the explanations and answers for the questions that Hannah and her friends had to contend with when trying out for the
Whatever, Wherever
quiz.

Which of the numbers should replace the question mark? 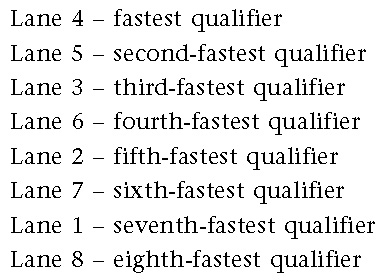 Each of the first three columns adds up to 15.

In an athletics contest between the army, the navy, and the air force, each team entered three athletes in a particular race. The winning athlete scored eight points, the runner-up seven, third place six, and so on down to none for last place.

Once the race was run, the judges needed a photograph to separate the first two army athletes to finish. A member of the navy’s team finished last. When the points were totalled, all three teams were found to have the same score.

Find by team the order in which the nine athletes finished.

What comes next in the sequences below?

1. Which flora is the state emblem of Western Australia?

3. What word is used for R in the NATO phonetic alphabet?

4. Who wrote the novel
Tomorrow When the War Began?

1. The Amazon River flows through which two countries?

2. What does the surname Cooper mean?

3. In what year did America first send men to the moon?

2. A person who makes buckets or tubs

How would you go?

Here’s a
Whatever, Wherever
quiz for you to try. There are four categories with five questions in each: Maths, Problems, Vocabulary and General Knowledge. Good luck!

4. Six people meet for dinner. Each person shakes the other person’s hand once. How many handshakes will there be?

5. If you divide the number four less than the next prime number after 23 by 5 you will get a number half the size of me. What number am I?

7. Of a group of people sitting in a corporate box watching a swimming race, twelve say they like freestyle, ten prefer backstroke, three like both freestyle and backstroke and five don’t like either. How many people in the corporate box?

8. Without taking your pencil off the paper connect all nine dots by using only four straight lines.

Ramage's Trial by Dudley Pope
Lanherne Chronicles (Prequel): To Escape the Dead by Charlick, Stephen
Keep on Running by Phil Hewitt
After the Fall by Kylie Ladd
Once Taken by Blake Pierce
Anything for a 'B' (MF) by Francis Ashe
A Heart in Sun and Shadow (Cymru That Was Book 1) by Annie Bellet
Dragonvein by Brian D. Anderson
The Land God Gave to Cain by Innes, Hammond;
Compass Box Killer by Piyush Jha
Our partner