9. An ant is trying to crawl out of an 8 metre well. During the day it climbs up 3 metres, but during the night it slips back 2 metres. The day starts at 8 a.m. and the night starts
at 8 p.m. Both equal twelve hours. If the ant starts his journey at 8 a.m. on Saturday, when (time and day) will he reach the top?

10. Lamp A is less bright than Lamp B. Lamp B is brighter than C and D. Lamp D is as bright as Lamp C. Which lamp is the brightest?

12. What word is the best definition for volatile? Angry, changeable or frightening

13. Unjumble these letters to form a word meaning ‘seek’: CHARES

14. If a vowel is worth 3 points and a consonant is worth 1 point, what is the value of the capital city of Australia?

15. If you rearrange the letters ‘ANDLEGN’, would you have the name of an ocean, animal, city or country?

16. Which is the odd one out? Carp, herring, shark, whale or pike

17. Name the ocean that lies to the east of Australia and to the west of America.

18. At which pole will you not find a polar bear?

20. What coloured ball on a snooker table has the highest value? 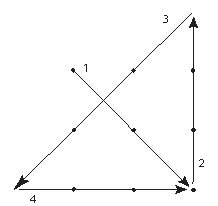 Toby Jones and the Magic Cricket Almanack (with Brett Lee)

Toby Jones and the Timeless Cricket Match (with Brett Lee)

Shielding the Truth (League of Legends, Book 1) (with Laurie Daley)

BY MICHAEL PANCKRIDGE AND PAM HARVEY

M
ICHAEL
P
ANCKRIDGE
is the author of the bestselling Toby Jones cricketing adventure series. He lives in Geelong, Victoria. His main interests include a wide variety of sports, music, reading and keeping fit. He has worked as a teacher for just over twenty years and currently teaches part-time at Geelong College.

P
AM
H
ARVEY
lives in Bendigo with her husband, two children, two dogs, two goldfish, two ducks, fifteen chooks and a ghost horse. Pam works as a physiotherapist, a TAFE teacher and other bits and pieces. She’s enthusiastic about a lot of things—including books, chocolate and getting up in the morning—and wears a bracelet made out of spoons. Pam has been writing since 1993.

The authors would like to say thanks to the team at HarperCollins, who are very easy to get along with—especially Lisa Berryman, Patrick Mangan and Liana Spoke. Special thanks to Olivia Dalton and Stephanie Taylor for their expert advice on swimming matters. Two great swimmers and two great people! Michael would like to thank Pam for keeping him on track. Pam would like to thank Michael for leaving the track to get more ideas.

An imprint of HarperCollins
Publishers
, Australia

First published in Australia in 2007

This edition published in 2010

The right of Michael Panckridge and Pam Harvey to be identified as the authors of this work has been asserted by them under the
Copyright Amendment (Moral Rights) Act 2000.

This work is copyright. Apart from any use as permitted under the
Copyright Act 1968
, no part may be reproduced, copied, scanned, stored in a retrieval system, recorded, or transmitted, in any form or by any means, without the prior written permission of the publisher.

In the deep end.

Stories We Could Tell by Tony Parsons
The Jerusalem Creed: A Sean Wyatt Thriller by Ernest Dempsey
Giving what He Wants (Celine and Rhyland Series) by Deorre, Iris
Lightnings Daughter by Mary H. Herbert
Departures by Jennifer Cornell
The Book of Earth by Marjorie B. Kellogg
The Kingdom of Dog by Neil S. Plakcy
Undone by John Colapinto
Return to the Dark House by Laurie Stolarz
Bride for a Knight by Sue-Ellen Welfonder
Our partner