In the Deep End 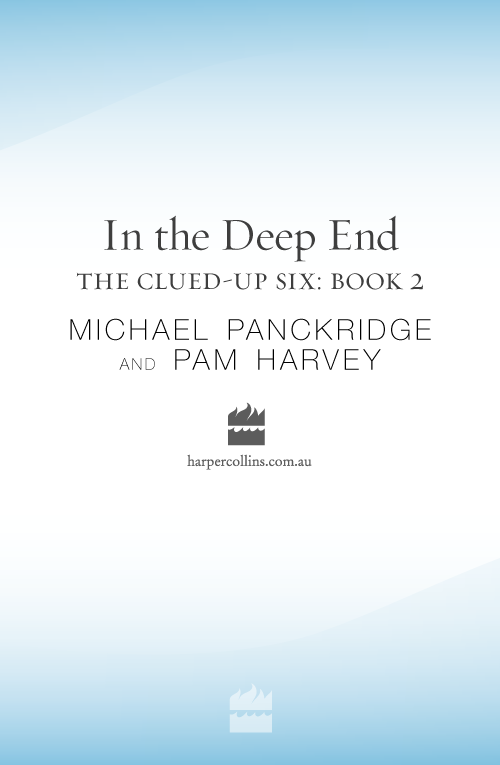 To Bronte, Eliza and Jo.

For Mick: without you, nothing would be written.

History-making Swimmers: Two of the Best

How would you go?

Gabriella breathed in the smell of chlorine and smiled. The excitement was surging through her veins, like it did at every major swimming event she entered. And because this was a big event—maybe the biggest for the year at the Teasdale Community Swimming Centre—no one but the swimmers was allowed to enter the pool. The surface of the water looked like glass; smooth, sparkling and yet to be broken. It would stay like that until the Under 10 100 metre freestyle event began the carnival.

Gabby checked her program. She’d highlighted in bright pink the only event she was swimming—the 400 metres freestyle. Under 16. At 11.25 a.m.

Under 16. Being two years younger than most of the other swimmers, she was out of her age group, but after lengthy discussions with her coach they had finally agreed that this race gave Gabby the best chance of winning. Then she’d secure a start at the ‘States’ down in the city at the State Aquatic Centre—a venue she hadn’t yet swum in because of Andrea Simpson.

But swimming against fifteen year olds, and racing an event twice as long as she was used to, had surely finally taken her away from the stunningly brilliant Andrea Simpson. Andrea would continue to swim Under 14s. What reason could she possibly have to move out of her age group?

It was a gamble Gabby and her coach, Pat Lindsay, had decided to take. Although Gabby had beaten Andrea in small, relatively unimportant races in the past year, she had never beaten her at an inter-school, club, Teasdale championship or country race meet.
Andrea Simpson first. Gabriella Hunter second.
Gabby was sick of it. Today, hopefully, that was all going to change.

Swimmers from the surrounding districts were competing, but no one from metro and only a swimmer from down near the coast,
Stephanie Dalton, could match the times Gabby had been recording at training. The other names on the program meant little to them.

Gabriella looked up at the grassy slope where a crowd of people was quickly building. Someone screamed then waved. She waved back. It was Hannah. Gabby smiled. Hannah had come to watch!

There was some commotion up on the bank next to her. Gabby took a few steps towards the hill. Suddenly Hannah, Hannah’s little brother, Sean, and Angus were standing up, holding letters. Hannah had a ‘G’ and an ‘O’. Angus had another ‘G’ and an ‘A’, and Sean had a ‘Y’.

‘G-O-G-A-Y,’ Gabby whispered to herself, smiling despite her nerves at the fact that they’d forgotten the ‘B’s.

Now Angus and Hannah were dragging someone to his feet. E.D.! My God, Gabby thought. Even E.D. was here. Surely they hadn’t just come to watch her?

Reluctantly, and looking about to make sure no one was watching, E.D. held up his two ‘B’s, one of them upside down, waving them up and down with the others, but with a total lack of interest: G-O-G-A-B-

Gabby waved and she heard Hannah shout again. She felt a rush of warmth for her friends which surprised her. Then again, after their adventure with Lightning Strikes and the crooks up at Bentley’s stud farm, where they’d been through so much together, it was natural that they had bonded into a close group.

Gabby’s nerves tingled as the microphone crackled suddenly and came to life.

‘Would competitors in the first three events of the program—the Under 10 100 metres freestyle for boys and the Under 13 50 metres backstroke for boys and girls—please make your way to the marshalling area.’

Gabby took one last look at her friends, then headed to the warm-up pool to do some stretching. She checked her watch again. 9.45 a.m. Her event was well down the program with call-up scheduled for 11 o’clock.

She spent the next hour working through every detail of her pre-race routine, from checking her bathers, goggles and cap, followed by her warm-ups, both in and out of the water, to a final chat with her coach, and then her visualisation.

By 10.35 her body was feeling lithe and strong. There was still no sign of Andrea
Simpson, but that wasn’t unusual. Andrea had a habit of suddenly appearing at major swimming events out of thin air. She would arrive nonchalantly at the side of the pool appearing to have done little warm-up or pre-race routine, peel off her tracksuit, wind her arms around in wide circles a couple of times, then carve up the water and her opponents with the most ruthless and breathtaking swim. She had no grace or style, and this made Gabby even angrier.

Gabby carefully took her iPod from her bag, plugged in her earpieces, then cranked up the volume of her latest motivation song. Taking a long, slow breath, she began the final phase of her preparation, a virtual race where she imagined herself swimming the perfect 400 metres.

As she closed her eyes, Andrea Simpson walked past her, striding purposefully towards a table where three officials sat, shuffling papers and laying out ribbons and trophies. With the music pumping through her body, Gabby remained blissfully unaware of Andrea’s presence. It wasn’t until her rival’s name was called out, just minutes before the event, that Gabby realised what was happening.

One of the competitors had pulled out only 15 minutes earlier and Andrea would be swimming in the recently vacated lane one. She caught Gabby’s stare, adjusted her goggles a fraction, then turned away to look out over the pool. Pat rushed over—she knew Gabby would be panicking.

‘In lane three, please welcome Stephanie Dalton.’ Polite applause drifted across the pool towards the swimmers.

‘For heaven’s sake, pull yourself together,’ her coach snapped, trying to appear relaxed herself. ‘You’ll swim the race we’ve planned and you’ll beat her anyway.’

Gabby nodded again, letting the words soak over her. She knew she had to calm herself, and quickly. An hour’s pre-race focus was threatening to fly out the window.

‘Too right it is,’ Pat grinned. ‘You’re being called. Give them a wave and swim the race of your life.’

‘…Our second local talent, Teasdale’s very own Gabriella Hunter.’ The noise and cheering from the crowd lifted Gabby. She waved, just like at the Olympics, heard Angus yell out something, and walked back to take off her tracksuit top.

‘My own race,’ Gabby muttered, as she stepped onto the block in lane six. ‘My own race…’

Eight girls flew off the blocks. Gabby arched her body beneath the water, straining and thrusting like a dolphin, willing herself onwards before finally breaking and slipping effortlessly into her long, smooth strokes.

From the hill away to Gabby’s left, Angus gasped.

‘Who?’ E.D. slammed the car manual down and sat up on one elbow.

‘Geez, I had no idea she could swim like that,’ Hannah gasped.

‘Which one is she?’ E.D. yawned, shielding his eyes from the glare.

‘She’s out in front already,’ Hannah said. ‘By about half a body length.’

‘How many laps?’ said E.D., settling back down again on the grass.

Gabby tumble-turned through the 50-metre mark easily, if anything increasing her lead. She breathed both sides on the second fifty, seeing nothing but clear water. Was she that far ahead already? Had she taken it out too hard? Where was Andrea? Where were the other swimmers?

Gabby felt smooth and strong as she stroked her way down the pool for the second turn. She focused on steady breathing, long strokes and good technique. She worked through each part of her body, talking to each section. Feet? Are you stretching the toes, kicking evenly? Legs—stay
light, stay strong. Bum—stay high. Body—roll gently, not too much, just enough to keep me surging forward.

She was halfway down the next fifty. Arms? Big and strong around the shoulder, high out of the water. Hands—no slapping and splashing. Keep pulling through the water. Head? Nice and high, just the face…

Gabby’s concentration broke. She sensed a swimmer on her right as she was heading to the midpoint of the race. Had it been the crowd, suddenly screaming? Or had she noticed the splash in lane one?

Andrea was catching her. In a panic Gabby put on a burst, splashing her way to the wall which was suddenly only metres from her. But her turn was clumsy. Pushing off the wall with all the force she could manage, she glided through the water.

Gabby stole a glance to her left as she took her first breath of the new lap. They were level. Andrea had come from nowhere. Stroke for stroke they swam the next 100 metres, Andrea pushing ahead then Gabby drawing level. But it was never Gabby pushing ahead.

‘E.D.! For heaven’s sake put the magazine away for just two minutes and watch this,’ Hannah said, now on her feet.

E.D. looked up. Two swimmers were almost half a pool length ahead of the rest of the group.

‘Who’s the girl with her?’ he asked, dropping the manual and standing up.

‘I thought Gabby was in this event to
avoid
her.’

‘She was,’ Angus said, clapping.

E.D.’s reply was drowned out by the roaring and shouting from the crowd. The two golden girls of Teasdale swimming were battling it out in an epic struggle.

‘The girls are on national record pace,’ the announcer screamed, trying to be heard over the noise of the spectators, now all standing and shouting as Andrea inched ahead of Gabby once more.

Gabby was going to make her move at the 350 mark—but she wasn’t quite ready, her turn not strong enough—then at the 375 mark. But she was exhausted. Now there were only 10 metres to go. Her arms and legs had turned to lead. Her head felt heavy and her breathing was haphazard. Surely it was the same for Andrea, she thought. But it wasn’t.

Andrea surged on to the finish, narrowly missing the national record. To the crowd, who gasped in surprise as she hit the wall, it looked as if she could have swum another 400 metres. Gabby limped to the edge, two and a half seconds behind.

She touched the wall then flung two arms onto the lane rope next to her. She was too tired to feel anything. It was another thirty seconds before the last of the swimmers completed the race. Gabby stole a look up into the crowd. Hannah, Angus, Sean and E.D. were standing there clapping. They all waved—even E.D.—when they noticed her. But Gabby didn’t wave back.

She closed her eyes, trying to keep the tears away long enough to get out of the pool and find somewhere to sob—alone.

Broken Mirrors by Elias Khoury
Angels of Vengeance: The Disappearance Novel 3 by Birmingham, John
The Faded Sun Trilogy by C. J. Cherryh
Secrets She Left Behind by Diane Chamberlain
Embraced by Love by Suzanne Brockmann
Probability Space by Nancy Kress
The Best of Ruskin Bond by Bond, Ruskin
Watercolour Smile by Jane Washington
The Infinite Air by Fiona Kidman
The Queen's Margarine by Wendy Perriam
Our partner