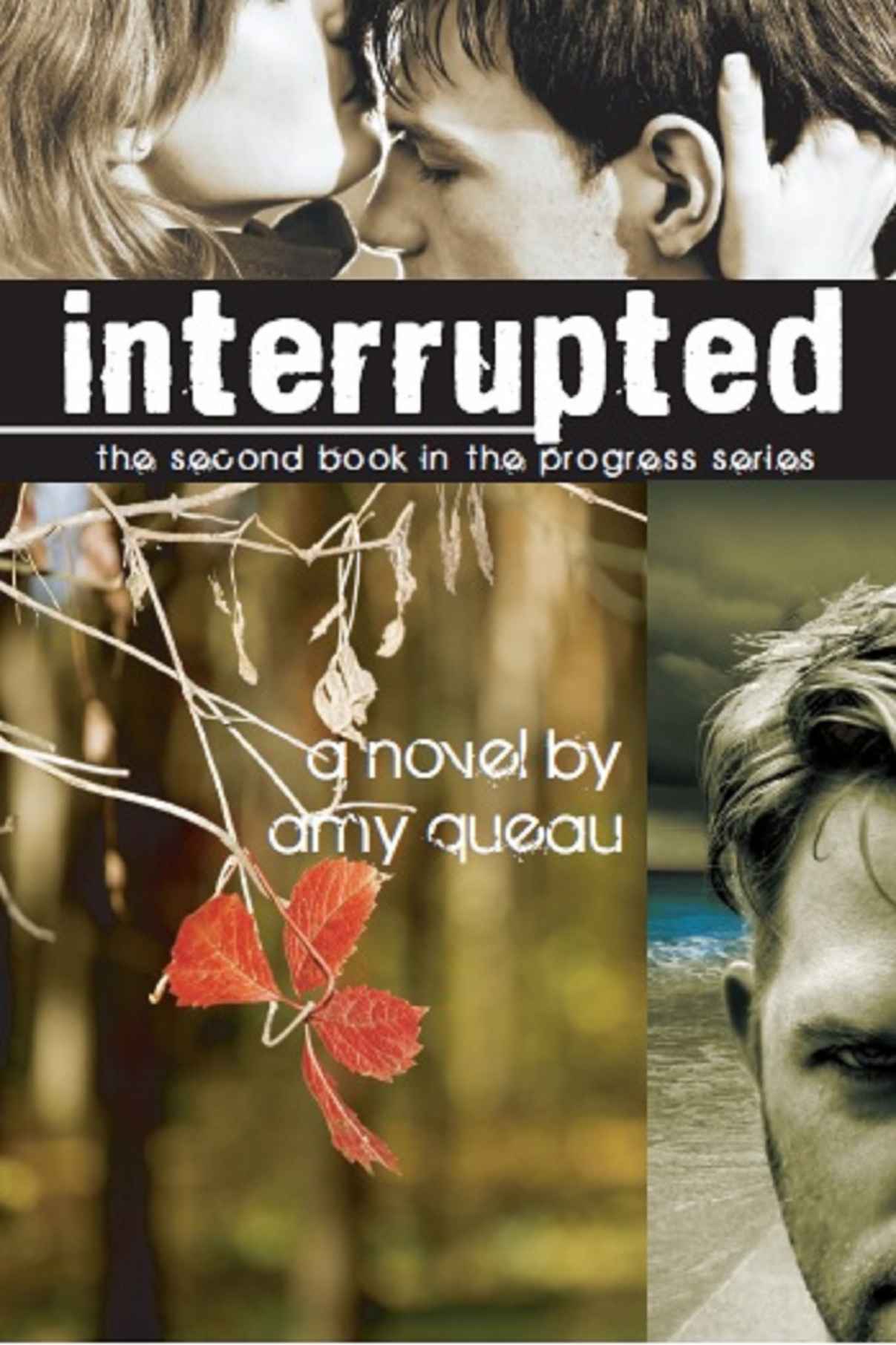 The Second Book in the Progress Series

All rights reserved. No part of this book may be reproduced in any form or by any electronic or mechanical means, without permission, in writing, by the author.

On the way home that night, I hit a rabbit; a beautiful, sprightly thing.  I had never hit anything with my car before, and haven’t since. And that fluffy white fur sprinkled the tar as I looked in my rear view mirror, horrified.

Nothing about that night was innocent. Nothing about it was right. Including my decision to leave him. I didn’t think about the fitting white rabbit metaphor until it was too late.

And now that I have remorse, an explanation, more I need to tell him…he’s gone.

Part I
Jesse
Chapter One

The fury was bubbling slowly, deep in his veins, as he watched Charlie walk through his bedroom door. He stood in awe, and walked to the window to glance out at the driveway where her car was parked. He listened carefully for the front door, to hear her footsteps returning, anything that would give him a hint that she’d changed her mind.

Come back to me. You can’t do this.

The small clock on his nightstand echoed with each tick, making the room feel smaller and his anticipation rise. He heard a jingle and a quiet click from downstairs. The silence crept up the stairwell, through the hallway and into his room. Even then, a part of him still denied that Charlie had left him.

He closed his eyes and exhaled.

He heard the muffled sound of her car door closing and the start of her engine. Glancing out the window in disbelief, he saw her pause for a moment. After lighting a cigarette, she stepped on the gas.

Jesse was fueled with hatred. He had trusted the wrong one. After finally gaining the courage it took to confide in and respect someone, she left him. Just like the rest of them.

He threw on a pair of sweats and made his way down to the kitchen. He opened the cupboard and took out his medication. Staring into the palm of his hand at an assortment of pills, he froze as his mind raced about Charlie.

How could she do this? Is this more of our fucking game? Does she expect me to come running after her? No. She knows me better than that. See, I told you. You just
had
to go and fuck her. You knew everything would change, and yet, what? You hoped. You hoped she’d want to see who you really are? You hoped she’d accept you for all your flaws, scars, moods? You hoped she was different?

This snuck up on me.

Fuck hope. Hope is for the weak-minded. And fuck Charlie! Who does that? Who just gets up and leaves when someone is about to bare their fucking soul?

No, fuck Charlie. FUCK YOU, CHARLIE!

Jesse threw his medication across the room and began ripping the cabinet doors off their hinges. One by one, he wrestled with them and whipped them across the room. They banged the bookshelves and shattered the windows. In his menacing rage, verging on madness, he began kicking and punching walls, ripping the curtains off the windows and overturning tables just to hear them crack on the floor. There was screeching in his ears and his head began to ache. He walked swiftly to the bookshelf and plucked off the remaining books, ripping out the pages by the handful and tossing the crippled bindings against the wall.

He stepped back and glanced around the room. Not a single moment of regret passed through him when he saw the disaster before him. The walls were chipped and broken. Framed pictures were tilted and the glass was in pieces. The cold spring air was rushing in through the broken window frames, cooling the room quickly, which only made the scorching blood traveling through his veins tolerable.

He stood, trying to focus on one thought. Any thought. Something that could erase all the damage that had spun from the past two hours. He ran upstairs and stood in the entryway, staring into his bedroom.
She was here. She was here just a moment ago. And now I’ve lost her.
He walked to the edge of his bed and looked down at the messed sheets. Picking up a pillow, he buried his face into it and breathed in deeply.
That damn perfume.
He hugged the pillow to his waist, grabbed his chest and sank to his knees, collapsing to the floor.

Slouched, he rested his hands on his knees and stared into the sea of dirty clothes and loose change that littered his carpet, trying to make sense of Charlie’s motivations.

“I’ll never be able to be everything you need me to be. And that’s okay. I just needed to be here for you. Your friend, your lover. Your confidante. I wouldn’t change a single moment of it. But you need to realize that love is more than just an obsession wrapped up in a tiny, dancing brunette package.”

He glanced down at his tattoo on his forearm and traced the lines with his finger. His thoughts slowed and his mind emptied. He grabbed his hair and slumped his head between his knees.

“What the fuck!” Jesse’s head shot up when he heard Jake’s scream from downstairs.

Jesse rose quickly and grabbed a T-shirt from the floor. Pulling it over his head, he paused at his torso with a thought.

“Jesse Fucking Anders! Where the fuck are you? I’m going to kick your ass!” Jake’s voice rumbled through the hallway and Jesse grabbed his shoes and keys.

“I’m here,” Jesse said, quickly stepping down from the stairs.

Jake was standing in the middle of the living room, assessing the damage.

“You want to explain this to me? What the hell happened here?”

“What? No. You’re not going anywhere until you tell me who trashed my dad’s house,” Jake said, his face turning red.

“That’s all you’re going to say? No explanation?”

“Not now, I have to take care of something,” he said as he opened the door.

“Okay. Fine. That’s the way it’s gonna be? You’ve got one week to find a new place to live!” Jake shouted through the door just as Jess shut it behind him.

It’s one of those moments. It’s a moment so fragile that if I move or speak, the whole thing will collapse.
So I’ll just sit here, in this dirty chair, in a place that shouldn’t be open at midnight, and listen to the buzz vibrating in my head. I’ll listen to the screech of the needle as it collides with the layers of my skin, giving me a different kind of hope. One that I can make myself.

He took a drink straight from the bottle and welcomed the physical pain he was about to endure in order for the clawing in his gut to ease.

The next afternoon, Jesse arrived at work early, dressed in the same clothes he was wearing the night prior. The manager Lawrence, one waitress and one cook were the only three people in the restaurant. He walked into the office and shut the door.

“What do you mean? Are you quitting?” Lawrence asked, leaning back on his chair.

Lawrence scratched his jaw and let out a sigh. “I took a chance on promoting you, Jesse. Things have been going smoothly for the past couple of weeks. I’ve been surprisingly impressed with your performance. What’s going on? Did something happen?”

Jess bowed his head down and clenched his jaw.

“Oh. This has nothing to do with work, does it?” Lawrence asked, snapping away at a piece of gum in his mouth.

Jesse tried to piece together the words, something that would be appropriate for the situation. Mentioning Charlie would only cause more trouble.

“You’ve given me a great opportunity here, but there’s no way I can stay. If there was any way I could remain with the company, I would.”

“So, what am
I
going to do? I just hired you and now I have to find a replacement. Are you at least going to give me a two-week notice?” Lawrence said, obviously annoyed.

Jesse shook his head and furrowed his brow.

“Do you have another job lined up?”

Lawrence gave a slow exhale and ran his hands through his hair. He muttered a few words that Jesse couldn’t hear.

Lawrence
’s eyebrows shot up with a sudden idea.

“I just got an email from headquarters this morning. They’re looking for a Delivery Manager in
New Hampshire, if you’re willing to relocate. Then I can keep you for at least a week before you leave. It will give me some time to find your replacement.”

“Yes… a town on the coast, I believe.  Let me find the email,”
Lawrence said, turning to his computer and moving the mouse around. “Yeah, it’s in New Hampshire, a town called Rye. It pays the same as you’re making now,” he continued.

I have no place else to go.

“But Jess, I gotta ask… Does the reason you’re leaving involve the police? I happened to notice a little bit of blood on your shirt, there. Are you in some kind of trouble?” Lawrence motioned toward Jess’s shirt and his eyes traveled to a small blood stain under his arm.

Jesse looked down and tried to wipe it away. “No, no sir. No police, surprisingly. Not this time,” Jess said with a tiny smirk.

“Do you want me to call the manager over there?”

“Can I take the day to think about it?” asked Jess.

Will she be here today? I can’t stay if she’s going to be here.

“Do you mind if I have a quick smoke?”

Jess nodded and headed straight for the server’s schedule posted on the bulletin board. He quickly found her name and the next week’s worth of Charlie’s scheduled days.