Read Is It Wrong to Try to Pick Up Girls in a Dungeon? Online

Is It Wrong to Try to Pick Up Girls in a Dungeon? 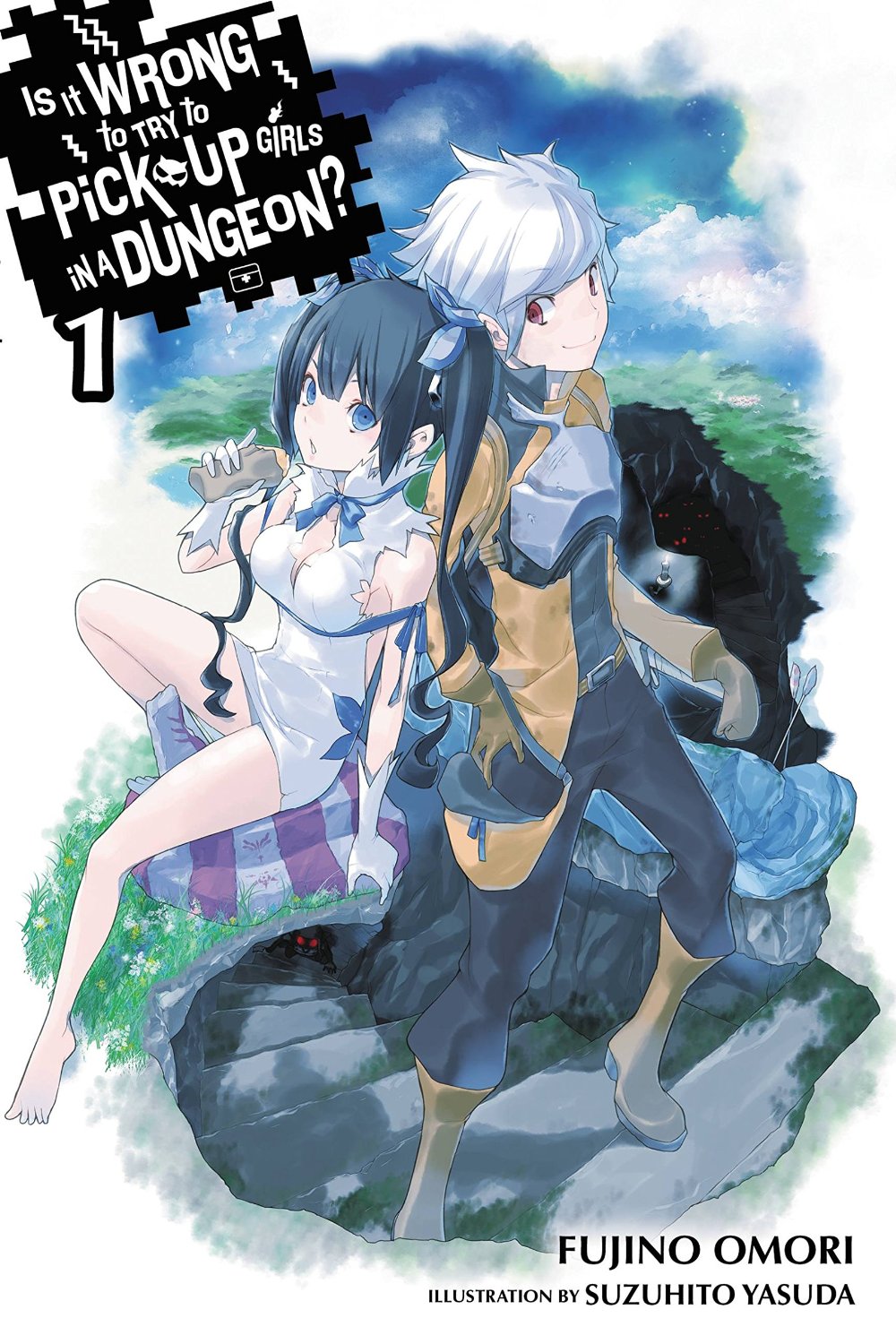 Prologue
IS IT WRONG TO TRY TO PICK UP GIRLS IN A DUNGEON?

Is it wrong to try to pick up girls in a dungeon?

You know, an endless labyrinth divided into multiple floors and filled with scary monsters?

Join a group of fearless adventurers seeking wealth and fame. Go off to battle as soon as guild registration is complete.

Meet a beautiful girl and protect her from an onslaught of monsters with only a sword in my hand.

The air fills with her echoing screams, the monsters’ roars, and the clash of my sword as we face certain death.

In the end, all that remains is her sitting on the floor beside my cool, heroic self standing over the remains of all the monsters I slew.

Her cheeks blush as she looks upon me with beautiful, sparkling eyes. Love is about to bloom.

Then sometimes I’d go to the local watering hole to boast about my day’s adventures to the cute barmaids, make some new allies.

Sometimes I’d protect a young elfess from a few of my more barbaric comrades.

Sometimes I’d help a struggling Amazonian warrior by letting her join my party.

Sometimes I might be seen getting friendly with other girls, causing some drama and jealousy.

I want to grow up a bit, become the kind of hero men dream about in tales of adventure.

I want to be more than friends with cute girls.

I want to meet the ladies of all the different races.

Isn’t having these slightly corrupt and naïve thoughts part of being a young man?

Is trying to meet girls in a dungeon, no… a harem, really that wrong?

I’m about to die courtesy of these slightly corrupt and naïve thoughts.

Basically, I’m being chased by the bull-headed man-beast, the Minotaur.

I’m going to be devoured by a monster that my measly Level One attacks can’t even scratch.

Where did my dumb, despicable delusions get me? To the Minotaur’s dinner plate, that’s where. I’m such an idiot…

I was stupid to think I was destined to find my dream girl in a dungeon.

Striking gold in here—the golden locks of a beautiful maiden, that is—was nothing more than a hopeless fantasy.

Come to think of it, I was doomed the moment I decided to look for my dream girl in a dungeon where hundreds of adventurers die every day.

Ahh, what would I give to go back in time? To go back to that moment when I came of age and registered at the guild, eyes sparkling, and punch myself in the face. That would be so nice…

But that’s not possible, physically or otherwise.

The Minotaur’s hoof comes crashing down behind me.

Ha-ha! It missed! Eh? When did that crack get there?

Not the most graceful face-plant… Here comes that hoof again! Roll! Now!

All I can do now is scoot my sorry butt back.

All the cute girls would laugh for sure if they saw me like this. From the start, guess I never had what it takes to be a beloved hero.

My back hits the wall. Now there really is nowhere to run.

I sprinted all that way, hall after hall, just to get trapped in a wide, square room. And now I’m cornered.

This really is the end…
I think to myself, my teeth chattering and tears rolling down my cheeks.

The Minotaur’s nose is so close, its putrid breath pounding my skin.

I look up at its ridiculously muscular body. It has to be at least twice my size. What’s worse, it’s gloating over me with a clumsy, broken smile.

In the end, I didn’t meet any girls at all. The same fantasies that got me in this mess are running through my head for the last time. Oh look, the Minotaur’s hoof is above my head…

The next moment, a line shoots across the creature’s torso.

Sounds like he’s just as confused as I am…

The line doesn’t stop there. It travels through thick pectoral muscles, across the raised leg, up the thigh, to the shoulders, and finally out the Minotaur’s neck.

Now a silver light is shining through…

And so it was that a monster I couldn’t scratch was cut into slabs of meat.

Its dying roar of surprise and pain echoes through the chamber.

The beast’s body falls to pieces along the dissection incisions, as if the seams of an overstuffed doll all burst at once. Its dark red “stuffing” sprays out like a fountain.

Time stands still as a tsunami of beast blood washes over me.

That’s when I see a young girl, no… goddess emerge from behind what’s left of the bull monster.

Her thin body is decorated with light blue clothing.

Even in armor, she radiates feminine beauty.

She stands tall, despite her petite frame. Her bulging twins are packed tightly into a breastplate engraved with a silver emblem. The same emblem graces her wrists and blood-soaked saber. She points the glistening blade downward, the blood dripping harmlessly to the floor.

The blond hair hanging down to her waist shines so brightly, I could swear it’s made of real gold.

Atop a body that any woman would call delicate perches the face of a sweet, young girl.

She looks down upon me with golden eyes.

A female warrior with golden eyes and hair, clad in light blue raiment.

Even a Level One newbie like me knows who’s standing there.

Everyone knows she’s achieved the highest rank among human, no… all female races, Level Five.

My heart feels like it could explode and fall to pieces any second. That is not “okay.”

My cheeks blush as I gaze upon her with sparkling doe eyes. Love is about to bloom… no, love is erupting within me.

My soul is gone, it’s hers now.

Is it wrong to try to pick up girls in a dungeon?

I was not wrong.

TemptingJuliana by Unknown
Thorn in My Heart by Liz Curtis Higgs
Getting to the Church On Time by Erin Nicholas
The Gollywhopper Games by Jody Feldman
Access Denied (and other eighth grade error messages) by Denise Vega
The Handoff (Big Play #3) by Jordan Ford
Society Wives by Renee Flagler
A Fitting End: A Magical Dressmaking Mystery by Melissa Bourbon
Fallen Angel by Heather Terrell
Hell Week by Rosemary Clement-Moore
Our partner