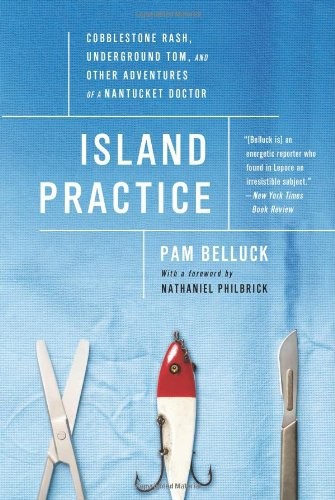 Lepore’s island, Nantucket, is much more than a charming tourist destination or a summer haven for the exceedingly wealthy. It may draw more than a million visitors a year, and be known the world over for its cobblestone streets, lovely beaches, and whaling industry nostalgia.
It may be a magnet for hedge fund managers, media personalities, and the political elite.
But its roughly 10,000 year-round residents experience Nantucket in an altogether different way. They know the allure and liabilities of living in a place that is not always easy to get to or to get away from. Mystery has a way of drifting ashore, like the scrim of fog that can crease Fat Ladies Beach. And longtime residents are the first to say that this boomerang-shaped island—just fourteen miles long and three-anda-half miles wide at its widest point—seems to host more than its per capita share of outliers: eclectic, independent-minded, occasionally slippery or up to no good, often just aiming for a little reinvention.
“If you’re going to make it here, you’ve got to have something that’s different. People have to be characters who live here,” asserts Peter Swenson, who runs Family and Children’s Services of Nantucket. It’s a quality many islanders acknowledge with shrugged shoulders and a touch of pride.
“Nantucket attracts the kind of person who has some flaws, who in the real world would become a problem, but here they’re welcome,” explains Chris Fraker, Lepore’s longtime neighbor. “It’s safe out here. You’re one step removed.”
A sign in the Nantucket town clerk’s office puts it plainly: “Thank You for Not Discussing the Outside World.” “We print it up on fancy, bordered paper,” the town clerk, Catharine Flanagan Stover, pointed out to Lepore one day.
Thirty capricious miles of Atlantic Ocean stretch between Nantucket and its closest contact with the continent, the southern base of Cape Cod, Massachusetts. But the metaphorical distance can feel much greater.
Some people here call the mainland “America”—not wistfully, or in any way unpatriotically, but as a place they have happily, if only slightly and inconsequentially, seceded from.
“I spent ten years in America; I paid my dues,” says Richard Ray, a native Nantucketer who heads the health department for Nantucket,
which, including the tiny islands of Tuckernuck and Muskeget, has the unusual distinction of being both its own town and county.
Lepore himself decamped nearly three decades ago from Rhode Island. An emergency room doctor tired of shots being fired outside his Providence hospital and the nightly parade of urban gore gracing his gurneys, he was tantalized after a summer shift at Nantucket’s bite-sized hospital. With its rows of cedar shingles and white-railed widow’s walk coordinating neatly with the island’s graceful architectural simplicity, the hospital seemed quirky without being chaotic. Nantucket would offer an easier lifestyle and would be a great place to raise kids, he and his wife, Cathy, a nurse and school counselor, reasoned.
Lepore became the island’s general surgeon, the head of medicine at the island’s hospital, and the island’s medical examiner. “So maybe I can cover up my mistakes,” he suggests archly. He is the school physician and the high school football team doctor, and he has been reelected to serve on the school committee for more than twenty years straight. He has bootstrapped himself into becoming a nationally recognized expert on tick diseases, a special scourge on Nantucket.
Although he has no psychiatric training, he provides cut-to-the-chase, profanity-perfused psychological counseling. He acts as an occasional Dr. Doolittle, treating a run-over deer, an ailing sea gull, a postpartum sheep.
When crisis has enveloped the island, as with a string of teenage suicides in recent years, he is one of the people called upon to try to hold things together. And he and his wife have repeatedly taken in teenagers who are in trouble and others needing a place to stay, sometimes fraying the fabric of the Lepore family in the process.
Lepore’s family practice accepts all comers. He is not just a sawbones to the summer rich. Sure, he’ll handle Jet Ski collisions and overboard yachtsmen. Even a little Botox now and then. Once in a while, a vacationer will show up dangling a bluefish from his head or torso, the hook having snagged not only the fish, but the fisherman. But Lepore also
sees many working-class people and foreign laborers whose jobs undergird the luxury life: construction workers with sawed-off fingers or ears, lobstermen with chests crushed by winches, the firefighter’s son who shattered a finger launching fireworks.
An equal opportunity malady is something Lepore calls “cobblestone rash”—injuries from falling (or stumbling drunk) on Nantucket’s picturesquely uneven streets. There are also moped injuries galore, described with delicacy and decorum by the island doctor: “I’ve told people if they wanted the moped experience they could just let me hit them with a bat and then go over them with a sander.” Bedside manner á la Lepore.

Spirit - Stallion of the Cimarron: Music from the Original Motion Picture by Adams, Bryan
The Folly of the World by Jesse Bullington
The Golden Peaks by Eleanor Farnes
Forced Out of the Darkness by Jackson Jr, G. Wayne
First Love by Ivan Turgenev
Hanging on (Jessica Brodie Diaries #2) by K. F. Breene
Casanova Cowboy (A Morgan Mallory Story) by Loomis, Lisa
Behind the Hood (Behind the Lives) by Hansen, Marita A.
Olivia's First Term by Lyn Gardner
Twilight 4 - Breaking dawn by Meyer, Stephenie
Our partner