Read January First: A Child's Descent Into Madness and Her Father's Struggle to Save Her Online

January First: A Child's Descent Into Madness and Her Father's Struggle to Save Her 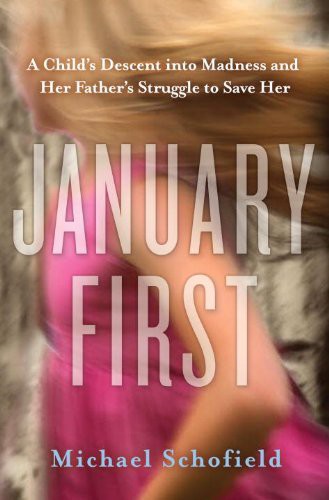 Published in the United States by Crown Publishers, an imprint of the Crown Publishing Group, a division of Random House, Inc., New York.
www.crownpublishing.com

For Jani, Bodhi, Susan, and Honey …
Thank you for your patience and your faith. I love you.

W
hile this is a true story, certain names and details have been changed to protect the identities of those who appear within.

S
chizophrenia is a little like cancer. You can’t trust that it will ever go away completely. Even if one is asymptomatic, once cancer has been inside your body, the chances of it coming back remain forever until the day you die. Years of trial and error have given my daughter a combination of medications that keep the worst of her schizophrenic symptoms under control. The hallucinations are still present, but now it’s more like having a TV show on in the background with the volume turned down. Most of the time it doesn’t interrupt her functioning in our world. But there are other times when the volume rises and becomes so demanding of her attention that she is lost within that world, unable to differentiate between reality and fantasy.

Four years ago, I was convinced that schizophrenia would take my daughter completely. But by the efforts of everyone in her life, we turned the tide back. We stopped its advance across her mind and turned the volume back down.

Nobody knows what causes schizophrenia. Studies are rare. The prevailing theory right now is that it is a bio-chemical defect in the brain (generally referred to as the “Biological Model of Mental Illness”), possibly a degenerative neural disorder closer to Alzheimer’s.

In dealing with it, sometimes I feel as if I’m carrying a flashlight around inside a dark tunnel, stumbling, trying to feel my way as I go, praying the batteries won’t die until I can reach the light at the end of the tunnel. Needless to say, I’ve tripped along the way. Yes, there are plenty of things I regret, moments with Jani I wish I would have handled differently if I could do it over again. Unfortunately, I can’t go back in time. I can’t change what happened in the past. All I can do is move forward and keep trying to be the father Jani needs me to be.

This book should not be taken as a ringing endorsement of what to do when your child goes to a place you can’t understand. Rather, it’s simply my family’s story of trying to find our way out of the dark.

During one stay in the hospital, while my wife, Susan, and I were visiting our daughter, Jani looked down from her fourth-floor window and said, “I want to jump down.”

I was busy trying to keep our son, Bodhi, engaged with the video game we were playing on a hospital computer. I heard her clearly, but I do what I usually do when I hear things like that: try to distract her.

“You don’t want to do that,” I replied, as calmly as I could. “Come here and play with me and Bodhi.”

Out of the corner of my eye, I could see she was still looking down.

I stiffened. It had been a long time since I’d heard her say anything like that. “I thought you wanted to live to one hundred,” I chuckled nervously.

She turned to look at me. “Because I have schizophrenia.”

There was nothing psychotic about her statement. It was actually quite lucid. Jani was simply sad. Susan and I were not sure what to do.

I immediately left a message for the doctor, who checked with her the next day. She repeated the same thing to him. He asked her what she believed it means to have schizophrenia.

“I see and hear stuff that isn’t there,” she told him.

MY FIRST WRITING about Jani was on my Facebook page. I wrote to vent, but soon realized that I was also trying to make sense of what was happening to my daughter and my family. My Facebook posts evolved into a blog, and I started writing more. When our story became public, hundreds of families emailed me, all telling a variation of the same message: “We thought we were alone.” Encouraged by the inspiration I’d gotten and hoping to help other families dealing with similar problems, I formed a private online support group where parents could talk to one another without fear of criticism, primarily from the anti-psychiatry movement, which, though it has many faces, basically denies that mental illness exists. They certainly cannot accept that it happens in children. Nevertheless, from my blog posts they drew conclusions, based on what they believe, that I abused my daughter and that the true cause of Jani’s condition rests in her parents and how she was raised.

I struggled for years to understand how, in the early twenty-first century, some people, even doctors, could be so unwilling to believe in child-onset schizophrenia. I’m still amazed at how many people write to me saying Jani is possessed by demons that must be exorcised. Really, it’s all the same thing: denial.

But when Jani said to me that she wanted to die, I finally understood where that denial comes from. Some people hang on to the abuse assumption or the demon theory because those things can be controlled. The idea that there is a disease out there that is totally
arbitrary is terrifying. If Jani can develop schizophrenia, any of us can. And the idea that all it might take is the crossing of some wires in the brain is more than some people can handle.

I understand. Nobody wants a child to suffer, so we come up with any explanation we can for why it is happening.

We cannot go inside their minds and “fix” them. But we can fix the world so they can live in it.

Schizophrenia is not a death sentence. It is a disease that can and must be managed. But it is also just another part of the rich rainbow of humanity.

I want Jani to see that rainbow. And I want you to see it, too.

That is why I wrote this book.

This is not a requiem for a child. This is a journey out of darkness and into the light.

It’s almost 9
P.M.
, and Susan finishes her shift reporting news and traffic for a radio station in Los Angeles at 7
P.M
. Allowing for traffic, she’s probably just getting home right now, but still I wait. I want to keep Janni out until there is nowhere left to go but home. We’ve been doing this since Janni was an infant. At that time I would take her to IKEA, where we’d play in the ball pit and I’d throw balls at my head and she would laugh hysterically. When I’m lecturing at Cal State Northridge, it’s Susan who’s making the rounds with Janni, but tonight I’m on duty.

As I watch her, running ahead of me into the mall, the only place
still open at this hour, I wonder how she keeps going. We’ve already been to the LA Zoo, IKEA, and a McDonald’s play area—anything that will engage Janni’s mind, even for a little while. We have season passes to the zoo, and her favorite part is when we go under a tunnel and then pop our heads up into the ground like prairie dogs. Janni loves dogs. She’ll even call people “dogs,” which I worry someone might take the wrong way.

She has to be well past the point of physical exhaustion by now, but if she is she doesn’t show it. Not that it matters. It’s not her body. It’s her mind. I have to wear out her mind. That has been the only way to get her to sleep since she was born.

The mall is almost empty, which is a good thing. The fewer people the better.

Janni storms into a toy store, one of the high-end places that sell classic toys. The clerk comes over to us.

“No, thanks. Just looking,” I say, wanting to get rid of her as soon as possible. The last thing I want is for Janni to start talking to her. Janni doesn’t talk like your average three-year-old.

The clerk nods and starts to walk away, but to my dismay Janni follows her.

“I have seven rats at home,” Janni tells her.

“Wow,” she replies, surprised. “You have seven rats?”

The Anomaly by J.A. Cooper
Christmas Caramel Murder by Joanne Fluke
A Headstrong Christmas Bride for the Lonely Father by Emma Morgan
Die I Will Not by S K Rizzolo
Widow's Pique by Marilyn Todd
The Paris Secrets trilogy: includes: Window, Screen, and Skin by Michele Renae
No Distance Too Far by Lauraine Snelling
Border Angels by Anthony Quinn
Never Cry Wolf by Farley Mowat
Give Us This Day by Delderfield, R.F.
Our partner