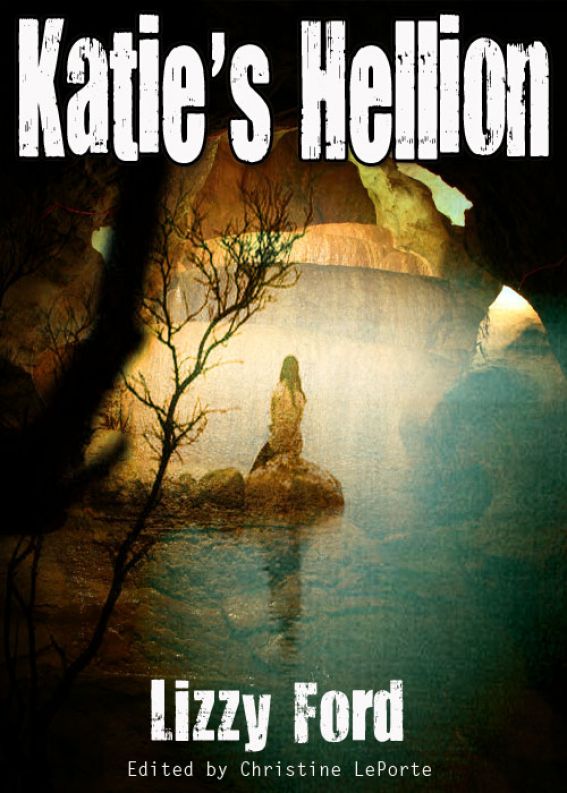 Smashwords edition license notes:
Thank you for downloading this free ebook.
You are welcome to share it with your friends. This book may be
reproduced, copied and distributed for non-commercial purposes,
provided the book remains in its complete original form. If you
enjoyed this book, please return to Smashwords.com to discover
other works by this author. Thank you for your support.

See other titles by Lizzy Ford at
http://www.guerrillawordfare.com/

Gabriel turned the pages of the Oracle’s
book, watching as words scribbled themselves across the parchment,
updating a chain of events that changed with every decision made by
the Council That Was Seven. Only the long-dead Oracle possessing
the book and the deities could see the Past, Present, and
Future.

He saw only the Present, like fractured
scenes of a movie where the actors continually changed their lines
and settings. Words leapt from the pages to form hologram-like
images dancing over the book. Friends and strangers alike acted out
their stilted scenes before dropping onto the page as words
again.

He always peeked at his friend, whom he'd
dropped off in Hell to serve an undeserved sentence. Rhyn's powers
were beyond even Gabriel to control, and the unfortunate immortal
was a loose cannon that’d accidently almost destroyed the world
more times than he could count.

Gabriel's lover and master, the deity Death,
materialized beside him at the Oracle's altar in the center of an
ancient fortress in the Sanctuary. Each of the four Sanctuaries sat
on an island straddling the human and immortal worlds and housed an
immortal treasure, such as the Oracle.

"I know," he said, and turned the page in the
book to continue watching Rhyn.

Death took her human form out of respect for
the women of the convent-like Sanctuary that housed the Oracle. She
was beautiful, a woman of sunshine, smiles, and eyes that changed
from white to black and every color in between. At close to seven
feet with eyes and hair blacker than night and a permanent scowl,
he
was what most expected Death to look like. Yet the lithe
woman with the transparent skin and glow was exactly what people
saw when they went: a bright, beautiful, peaceful light.

"Immortals aren’t so far off from humans, are
they?" Death mused. "They share their weaknesses."

"I know what really happened, and I hoped
others would figure it out. He doesn't deserve to be in Hell," he
replied.

"You can’t interfere more than you have. How
many times have I warned you about breaking Immortal Code?"

"Does nothing bother you?" he asked without
heat, knowing the answer. "And technically, I interfered by making
him disappear before anyone figured out he’d saved humanity."

Death smiled serenely and placed her small
hand on the book. He met her gaze.

"All things come to me eventually," she said,
quoting the familiar words. "You, too, you know."

He was quiet, the words and holograms before
him blurring as he thought. The only immortals on Death's list were
those who were about to become dead-dead. He'd always hoped Rhyn
would have another chance, that Hell was a place to stash the
dangerous immortal until the world was ready for him.

"He didn’t deserve what he got," he voiced,
troubled. "In all my time, I’ve never felt guilt at what I do."

"You’re my best assassin, and you’re the only
one who can trespass in Hell and return. You had to do what you
did. If nothing else, you know he’s safe, and so are the little
humans."

"Are you serious about making him dead-dead
soon?"

"Let me show you something," she said, and
stepped up beside him. "Keep in mind, you're not supposed to be
anywhere near the Oracle. Only --"

"Deities and whatever," he finished with a
roll of his eyes.

She gave him a stern glare that made him
smile. Her human form was tiny enough that the Oracle's book
reached her shoulder level.

Death's hand hovered over the pages, and she
turned them quickly without touching them. She stopped and touched
a page with her fingertip. An image sprung from the paper before
them.

The earth in flames, with earthquakes
swallowing whole towns and buildings burning.

Gabriel shifted, well aware Rhyn was capable
of this.

Death gave him a pointed look, waiting for
him to jump to his friend's defense as he always did. It was hard
with the scenes she showed him flickering in front of him.

"The Future isn't set," he managed at
last.

"It's not," she agreed. "But if I don't make
him dead-dead, there's a good chance this is the fate of the human
world."

"I can't believe there's nothing that can be
done!" he replied with more emotion than he intended.

"Odd, coming from my best assassin."

He said nothing, watching the scene. Death
closed the book and looked up at him.

"Do you believe in him so much, or do you
feel so much guilt?" she challenged.

She considered him for a long moment before
turning away. He suppressed a sigh, sensing she was beyond mercy
for anyone on her list. Normally, so was he. Death held out her
hand, and an hourglass with black sand appeared in her palm.

"He could be such an asset to the Council
That Was Seven. Right now, he's useless to them and anyone else,
just an immortal whose freakish power should've landed him on my
list long, long ago," she said.

She tipped the hourglass, and black sand
began to spill.

"I'll give him a second chance," she
continued. "For you, my sweet, not for him. But I can't let him
stay alive long, or you've seen what'll happen. When the sand is
gone, I'll make him dead-dead, unless he can learn to control his
power and to work with his brothers."

Gabriel stared, surprised, then dismayed, at
her conditions. He watched the sand that was Rhyn's life and met
her gaze.

"And, you can't break the Immortal Code to
help him."

The restriction smacked him hard, as he'd
been ready to drag Rhyn out of Hell as soon as Death was gone.

"How do I get him out of Hell?" he
demanded.

"You won't. Someone else will."

"The leader of the Council That Was Seven is
about to make a decision that will alter all their paths. It
involves a woman destined to be the first Ancient's mate and who's
immune to immortals."

"He might, if she doesn't die before the sand
runs out."

Gabriel dwelled on this new information. He
wasn’t really sure Rhyn would consider being sentenced to eternity
with a mate much of an improvement over Hell.

She slid the Oracle's book carefully into a
satchel and replaced it inside the altar before placing the
hourglass in front of him.

"Immortal Code," she reminded him.

"You won’t kill me," he remarked, hope and
frustration filtering through him. "I’m violating Immortal Code by
serving you, by locking Rhyn in Hell to keep Kris from killing
him."

"Take him this, and don't you dare break the
Code again," she said.

A familiar vial appeared in her hand
containing what looked like sand. Rhyn's name was etched in the
immortals' tongue across the top. It was his immortal powers, which
Death had yanked from him when she ordered Gabriel to take him to
Hell.

Gabriel took it and smiled, cheered by the
thought of the most powerful immortal ever born cursed with the
self-control of a five-year-old in a room with fresh-baked cookies
and no adult supervision. Rhyn couldn’t do what others wanted, not
when he couldn’t control his own powers. Gabriel wondered if even a
mate and a second chance could help him.

"He tends to destroy the natural balance of
everything when he’s free," Death said with some annoyance. "Maybe
when he’s stabilized, he can leave Hell."

He looked at her, and she smiled the same
gentle smile she used to greet humans to the underworld.

"But who in Hell is going to become his
mate?"

"His brother Kris will take care of it," she
said.

"He’ll make things right with Rhyn after
their nasty break?"

Intrigued, Gabriel relented from his stubborn
position before the altar.

A knock at the door interrupted their
conversation. The leader of the convent that cared for the
Sanctuary opened the door and curtseyed. Death curtseyed back, gave
Gabriel a final look of warning, and followed the woman in grey to
afternoon tea.

He watched her go, wondering how he could
help his friend without breaking the Immortal Code yet again.
Pocketing the vial, he willed himself to the shadow world, the
place between worlds. It was hazy and cool, like a beach after the
evening fog rolled in. Portals to the mortal and immortal worlds
glowed warm yellow through the fog like beacons. He went to the
only portal that glowed black --the portal to Hell --and stepped
from the shadow world into the tiny, dark cell holding his
friend.

He watched Rhyn's body contort beneath the
spells of Rhyn's brother, Sasha. Without the contents of the vial,
Rhyn was defenseless against any immortal. Gabriel couldn't help
the feeling of deep satisfaction as he gripped the vial in one
hand.

Rhyn was being given a second chance, and
Gabriel hoped he killed Sasha before the sands in the hourglass
were gone.

Rhyn didn’t even know what shape he was. The
world was dark as always, cramped, his skin hot and clammy. He’d
been fevered for a zillion years, trapped in the tiny cell in
ever-changing forms, always in darkness.

At least he wasn’t burning or drowning or
freezing or watching his skin being pulled from his body and
screaming. Sometimes his brother let him out for a furlough,
claimed he was free, and then yanked him back. If nothing else, his
traitorous half-brother Sasha kept things switched up. He would
stay in this holding cell on the outskirts of Hell until Sasha
figured out some new grueling punishment.

A touch of coolness grazed his heated frame,
which always grew hotter than Hell when he changed forms. His body
contorted, and agony floated through him as the sixty seconds of
being whatever he’d been was up and he changed again.

"Still dark in here," said the voice of his
only friend.

"You here for me, Gabriel?"

"No, but thanks for asking."

Rhyn growled a painful laugh, appreciative of
the death dealer’s dark humor. Especially now, when he had no one
else.

"What am I?" he asked, panting as he dropped
to all fours.

"Not sure. You look like a cross between a
were-beast and a bird."

Gabriel’s touch was like ice, and Rhyn
shuddered. He changed again and this time recognized his human
form. One wall of his cell lit up suddenly. He shielded his eyes
and gazed into an empty prison cell opposite his. Surprised, he
crossed to the bars of his cell but found the whole wall
disappeared when he touched it. In darkness again, he dropped his
hands.

"You and Death fighting?"

Rhyn snorted and faced the corner, making out
Gabriel’s eyes, which gleamed darker than a night in Hell itself.
The death dealer was his only friend who’d stuck with him since
he’d been banned to Hell by his brothers and dragged there by the
immortal death dealer before him. Gabriel’s visits weren’t often,
but Rhyn had grown to like him.

Gabriel held out a vial he'd last seen in the
hand of a furious Death. A thrill went through Rhyn as he claimed
it. He popped the top off and dumped the sandy magic into the air.
The sand transformed into a mist and swirled around him before
settling into his skin. He felt the magic penetrate him to the
core, and the ancient tattoos marking him as both an immortal and
an Ancient blazed red in the darkness before subsiding.