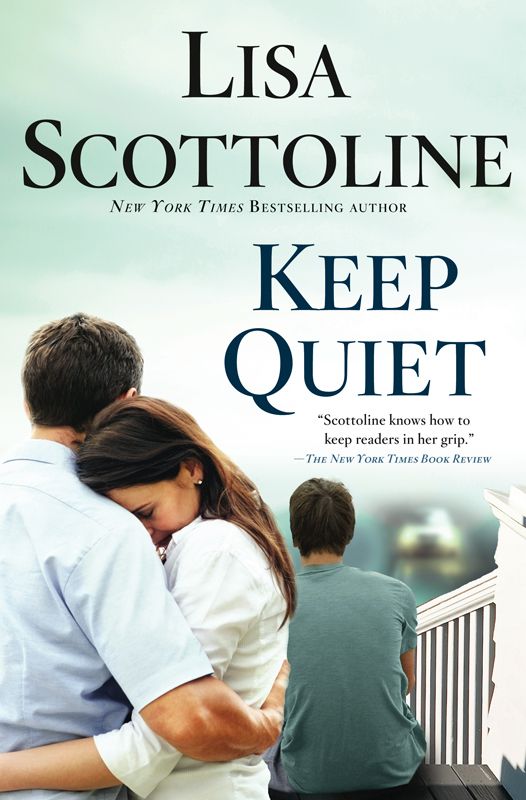 Making the decision to have a child—it is momentous. It is to decide forever to have your heart go walking around outside your body.

Jake Buckman knew his son had a secret, because his wife told him so. They didn’t know what it was but they suspected it was about a girl, since Ryan had been texting non-stop and dressing better for school, which meant he actually cared if his jeans were clean. Jake wished he and his son were closer, but it was probably too late to turn it around. Ryan was sixteen years old, and Jake couldn’t compete with girls, friends, the basketball team, Facebook, Call of Duty, Xbox, Jay-Z, Instagram, and pepperoni pizza. No father could, least of all an accountant.

Jake drummed his fingers on the steering wheel, waiting in front of the multiplex for Ryan, who’d gone to the movies with his teammates. The rift between father and son began five years ago, when Jake lost his job. The accounting firm he’d worked for had gone bankrupt in the recession, and he’d been out of a job for almost a year. They’d lived on his unemployment, his wife’s salary, and savings, but he felt ashamed at the brave smile on Pam’s face, the snow globe of bills on the kitchen table, and the endless rejection from jobs for which he was overqualified.

He shuddered, thinking back. Since he hadn’t been able to get a job, he’d done something he’d always wanted to do, start his own financial-planning business. He named it Gardenia Trust for Pam’s favorite perfume and he’d dedicated himself to getting it off the ground. He’d worked days and nights at a rented cubicle, cold-calling everyone he knew to drum up clients. He’d said yes to every speaking engagement, keynote or not. He’d given seminars at retirement villages, Rotary Clubs, and libraries. In time he became one of the top-ten ranked financial planners in southeastern Pennsylvania, but it had taken a toll on his family. He and Pam had fixed their marriage with counseling, but in the meantime, Ryan had grown up. Only Pam believed Jake could still fix his relationship with Ryan before their son left for college. She’d encouraged him, even tonight.

Go pick him up at the movie,
she’d said
. He’s expecting me, but you go instead.

The movie theater was wedged between Best Buy and Nordstrom, and cars idled out front, their exhausts making chalky plumes. Jake wondered if some of the other parents were in the cars, but he wouldn’t recognize them anyway. He’d only attended one or two parents’ nights, a National Honor Society induction, and assorted basketball finals, because Ryan played varsity. Pam went to all of Ryan’s games, having more flexibility in her work schedule, and Jake had told himself that her being there was the same as his being there, as if he could parent by proxy. He’d been wrong. He’d made himself superfluous in his own son’s life. His wife was the keynote.

A crowd flowed from the multiplex, lighting cigarettes, checking phones, and chatting as they passed in front of his headlights. Jake looked over to see Ryan push open the exit door with his shoulder and roll out of the theater with his teammates, whose names Jake had made a point to memorize: Caleb, Benjamin, and Raj. They were all tall, but Ryan was the biggest at six foot five and 225 pounds, the scruffy tentpole of a shuffling group of shaggy haircuts, black North Face jackets, and saggy pants—except for the two girls.

Jake shifted upward in the driver’s seat, surprised. He hadn’t known Ryan and his buddies were going to the movies with any girls and he was pretty sure Pam didn’t, either. One girl was a redhead and the other a long-haired blonde, who stood near Ryan. Jake wondered if the blonde was the mystery girl and if he could get a conversation going about it with Ryan on the way home. Pam always said her best conversations with him happened spontaneously, while they were driving around. If so, Jake would plan his spontaneity.

The girls waved good-bye, and he waited for Ryan to notice the Audi. He’d texted to say he was coming, but Ryan hadn’t replied, so he couldn’t be sure the text got delivered. Jake didn’t honk, wave, or do something else dorky, so as not to embarrass himself or suburban fathers in general.

Jake saw Ryan slide his iPhone from his pocket and flick his bangs back, so that the phone illuminated his son’s face. Ryan had large, warm brown eyes, a long, thin nose and largish mouth, his handsome features framed by wavy, chestnut-brown hair, which he kept longish. Everybody said Ryan was the spitting image of his father, but Jake knew that was true too many years and twenty-five pounds ago. Jake was forty-six years old, with crow’s-feet, graying temples, and a starter paunch to prove it. He always said that Ryan got his size from his father, but his brains from his mother, which was the best of both.

Jake watched as Ryan looked up from his iPhone, spotted the Audi, and jerked his chin up in acknowledgment, then slapped Caleb’s palm and came toward the car. Jake unlocked the passenger door, and Ryan opened it and slid inside, his jacket sliding against the leather seat.

“She was busy, so I figured I’d come. How was the movie?”

“Okay. You left Moose home?” Ryan kept an eye on his iPhone screen.

“Oops, yeah.” Jake hadn’t thought to take the dog, though Pam carted him everywhere. He disengaged the brake, fed the car gas, and headed for the exit.

“I get you didn’t want him to come. This car is too awesome.” Ryan kept his head down, his thumbs flying as he texted, growing the blue electronic bubble on the phone screen.

“Don’t. He’ll drool on the seats. We must keep the machine pristine.” Ryan paused as he read the screen. “You mind if I keep texting? I want to stay with this convo.”

“It’s okay, do your thing.” Jake steered around the back of the King of Prussia mall, where the lights of JCPenney, Macy’s, and Neiman Marcus brightened a cloudy night sky. Cars were rushing everywhere; it was Friday night, the busy beginning to the weekend. It should have been colder for February, but it wasn’t. A light fog thickened the air, and Jake remembered something he had learned tonight from the pretty weathergirl on TV.

Fog is a cloud on the ground.

He turned the defrost to maximum and accelerated toward Route 202, heading for open road. Ryan texted away, his hip-hop ringtone going off at regular intervals, punctuated by the Apple-generated swoosh. Jake wondered if his son was talking to the mystery girl. He himself remembered racking up huge phone bills when he first dated Pam, at college. He’d fallen for her their freshman year at Pitt and felt unbelievably lucky when she married him. She was a great wife, and he gave her total credit for Ryan being so well-adjusted and popular, despite his naturally reserved manner. He was earning A’s in AP courses, got solid SAT scores, and was already being recruited by college basketball programs, some Division I.

Jake switched into the slow lane, heading for the exit. He wanted to ask Ryan about the girls, but he’d warm up first. “So, how was the movie?”

“Oh, right.” Jake forgot, he had asked that already. “How’s Caleb? And Raj and Benjamin?” He wanted to show he remembered the names.

“Everybody ready for the finals?”

Jake was getting nowhere fast. He still wanted to know about the girls, and according to Pam, the trick with Ryan was to act like you didn’t care about the answer to the question you’d asked, or you’d never get an answer. So he said, offhandedly, “By the way, who were those girls at the movie?”

Ryan didn’t look up from his phone, his thumbs in overdrive. Pink and green bubbles popped onto his phone screen, so he was texting with more than one person, like a conference call for teenagers.

“Ryan?” Jake tried again. “The girls at the movie, who were they?”

“Nice.” Jake let it go, an epic fail, in the vernacular. He pressed a button to lower the window, breathing in the moist, cool air. The fog was thickening, softening the blackness of the night, and the traffic dropped off as they approached the Concordia Corporate Center. They passed glowing signs for SMS and Microsoft, then turned onto Concordia Boulevard, which was lined with longer-stay hotels. He’d eaten enough of their reception-desk chocolate chip cookies to last a lifetime, because even his out-of-town clients were in the suburbs, the new home of American business.

Jake returned to his thoughts. His own office was in a nearby corporate center, and he spent his days ping-ponging between his corporate center and his clients’ corporate centers, after which he drove home to his housing development. Some days the only trees he saw were builder’s-grade evergreens, planted in zigzag patterns. Lately he felt as if his life were developed, rather than lived. He was a financial planner, but he was coming to believe that too much planning wasn’t natural for trees or accountants.

Fog misted the windshield, and the wipers went on to clear his view, and Ryan chuckled softly. “Dad, this car is
sick.
I love how it wipes the windshield automatically.”

“Me, too.” Jake grinned, feeling the spark of a reconnection. They both liked cars, and last year, when Jake’s old Tahoe hit 132,000 miles, he’d bought the Audi, mainly because Ryan had lobbied for one. Jake was a born Chevy guy, but Ryan had built umpteen online versions of the flashy Audi on the company website and designed what he called a “dream machine”—an A6 sedan with a 3.0 liter engine, Brilliant Black exterior, Black leather interior, and Brushed Aluminum inlay on the dashboard. They’d gone together to pick it up, and Jake had given Ryan a few driving lessons in it, when Ryan had the time.

“Dude.” Ryan shifted forward, sliding the phone into his jacket pocket. “We’re coming up on Pike Road. Can I drive?”

Jake checked the dashboard clock, which read 11:15. “You’re not supposed to drive after eleven o’clock. You only have a learner’s permit.”

To My Senses The Nicci Beauvoir Series Book 1 by Alexandrea Weis
The Mousetrap and Other Plays by Agatha Christie
The Lollipop Shoes by Joanne Harris
Deceptions by Cynthia Eden
Whip It by Cross, Shauna
Butterfly in the Typewriter by Cory MacLauchlin
A Quiet Vendetta by R.J. Ellory
Doctors by Erich Segal
October Fest: A Murder-by-Month Mystery by Jess Lourey
Maybe Tonight by Kim Golden
Our partner